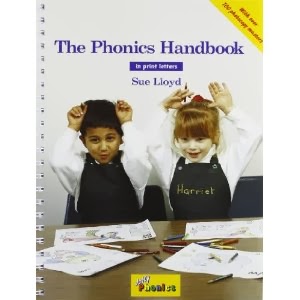 While I love some Waldorf aspects to learning to read, I’ve chosen to follow a more Montessori approach to reading. The best resource that I have found to help me in this journey has been The Phonics Handbook by Sue Lloyd, which is part of the Jolly Phonics series. I have the British version, as Canadian English is more like British English than American English, but I really haven’t come across any differences, as they usually occur in more complex words.

Jolly Phonics does recommend waiting until children show other signs of reading readiness before initiating their program, which I discuss here. Once children are showing ample readiness signs, the focus on the 40 phonic sounds (represented by 43 listed sounds) can begin. To look at the learning of the letter “m,” we can see how the program works:

I find this program so perfect in its connections and how it incorporates various learning styles, but in also how it encourages parents to slow down and really observe when their children are actually ready for focused writing/reading activities. The proliferation of alphabet flash cards and baby toys decorated with alphabetical and numerical symbols for infants has encouraged us to think that most children should (or can) learn how to read and write at incredibly young ages, but the Jolly Phonics system emphasizes the skills necessary to really learn how to read and write — for example, many parents could honestly assess whether or not their children could actually do a representational drawing of their favourite foods (one that you could identify if the child did it without you and didn’t tell you what it was) and the Jolly Phonics system clearly indicates that the child should be able to do this activity easily alongside practicing letter formation. Encouraging parents to look for those other “literacy readiness” cues before commencing the system helps ensure that using the Jolly Phonics system will be pleasant and fruitful for all involved.

Jolly Phonics divides the 42 letter sounds into 7 letter groupings, which we will be following here at Study-At-Home Mama:

I currently do not have a timeline in mind, though Jolly Phonics suggests introducing one group per week. Personally, I am only initiating literacy studies because Ella has begun writing on her own and her grandfather is threatening to use flashcards during their time together if I don’t get a move on. I would be happy to spend one or two months per letter grouping, based on Ella’s interest.

We will be using the Jolly Phonics system alongside traditional Montessori materials and a handful of newer materials. I personally don’t see a need to incorporate letters into every activity and I still feel that the most important literacy activities that I initiate will be storytelling and fostering a love of  learning, in all of its (written and nonwritten) forms.

The Jolly Phonics system later leads to the Jolly Grammar system, and both are heavily inspired by the Orton-Gillengham approach, but are arguably much more accessible.

If you want to check them out before buying, Jolly Learning has a great set of free learning materials on their website!