I cannot believe it’s taken me over a year to share Ella’s Mermaid Birthday Party with you! There were so many fun details in this party – and I’m proud to say the whole thing was really inexpensive.

Ella has been obsessed with mermaids since she was two, so it was a natural choice for her 4th birthday party. We had just moved and had officially started up the Montessori daycare that I continue to run out of our home 4 days a week – so not only were we on a budget from all of the moving and business expenses, we also had limited time to dedicate to the party planning efforts considering I had to make our home presentable before the party.

I decided that $150 was reasonable given that we had over 20 kids that Ella wanted to invite – she was leaving her part-time daycare now that I was starting my own, so we invited family friends, kids from her daycare that we wanted to keep friendships with, and our new friends in our home daycare. 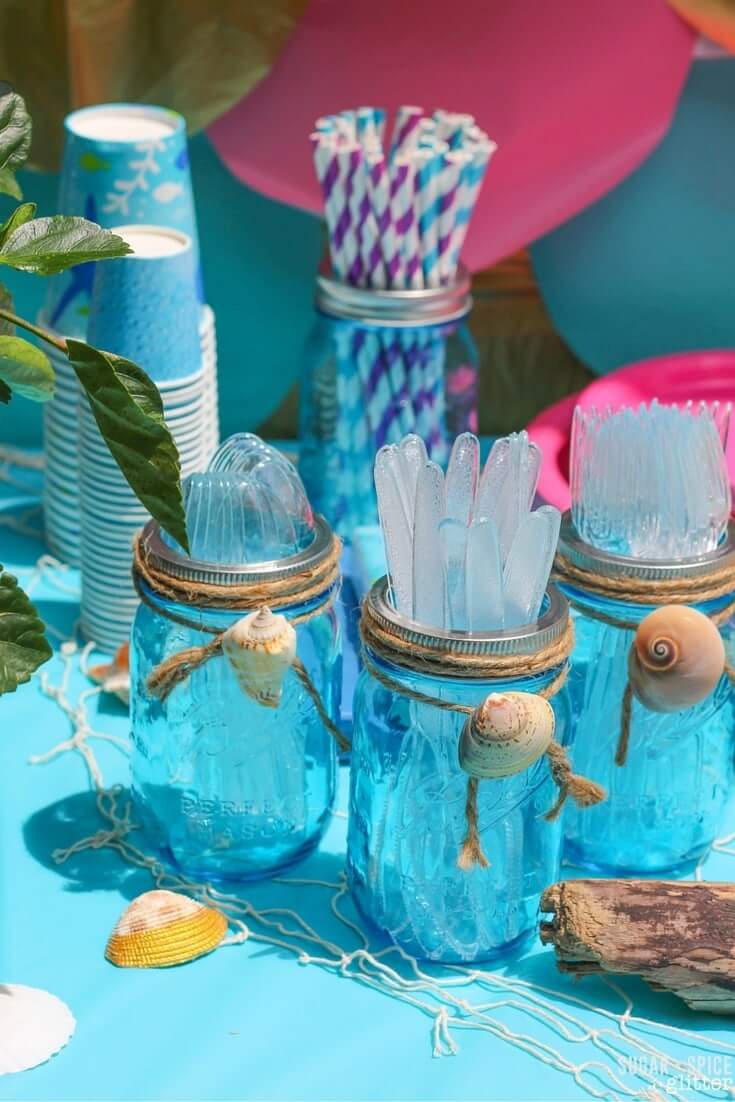 I always start with decor first because it can surprisingly take the longest to put together and coordinate. To start off with, we gathered everything in our house that had a ocean-type theme, from our Seahorse Statue to sea creature cookie cutters to anything pretty and blue that would work.

We went with a blue, pink, silver and gold color scheme which allowed other items to be tied in effortlessly. I purchased a few packets of seashells which I knew we’d be able to re-use in sensory bins and crafts after the party, and we were able to use them in a lot of different ways, and then some essential party supplies – like goody bag items, table cloths, etc. 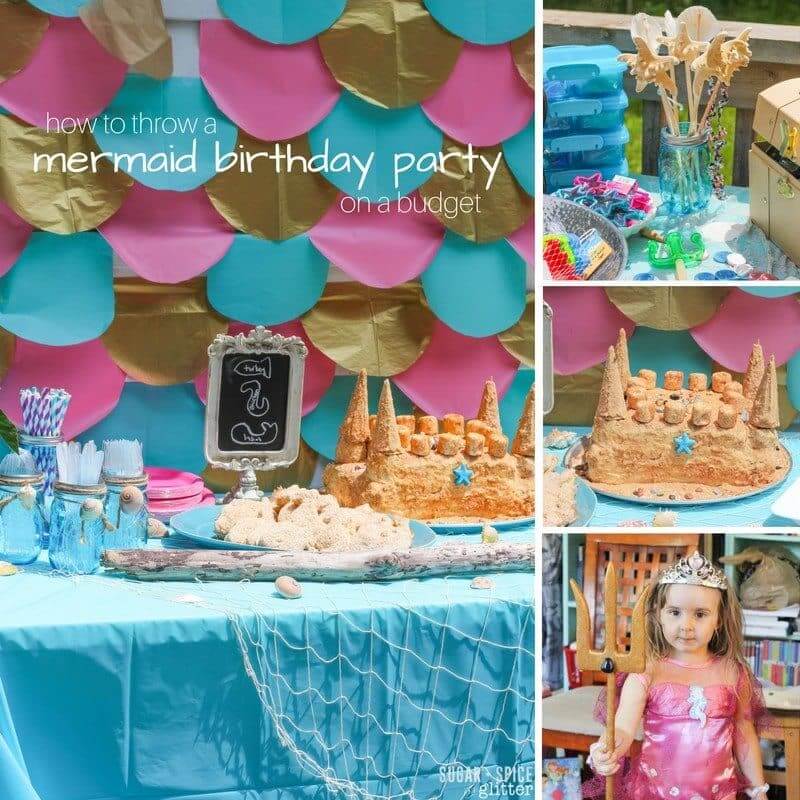 Here’s a full list of everything we did for mermaid party decor:

Total cost for decor: $35 *much of the decor was able to be re-used in our home after the party – mason jars, seashells, treasure box*

We also put out a collection of ocean-themed candies but they melted in the sun so I would not recommend those. We ran out of time to complete the cookies but they still looked cute and provided a dessert alternative to those not wanting cake.

For approximately 40 people (about half of them children) we spent about $60 – it could have been less if we had not served good quality seafood and individual drinks, but we saved money by making the food ourselves. While I didn’t serve cocktails, this Blue Lagoon cocktail would be perfect for the theme.

We used disposable (recyclable) cups, plates, straws, and utensils to make for a stress-free clean up.

Here are some other mermaid party foods worth checking out. 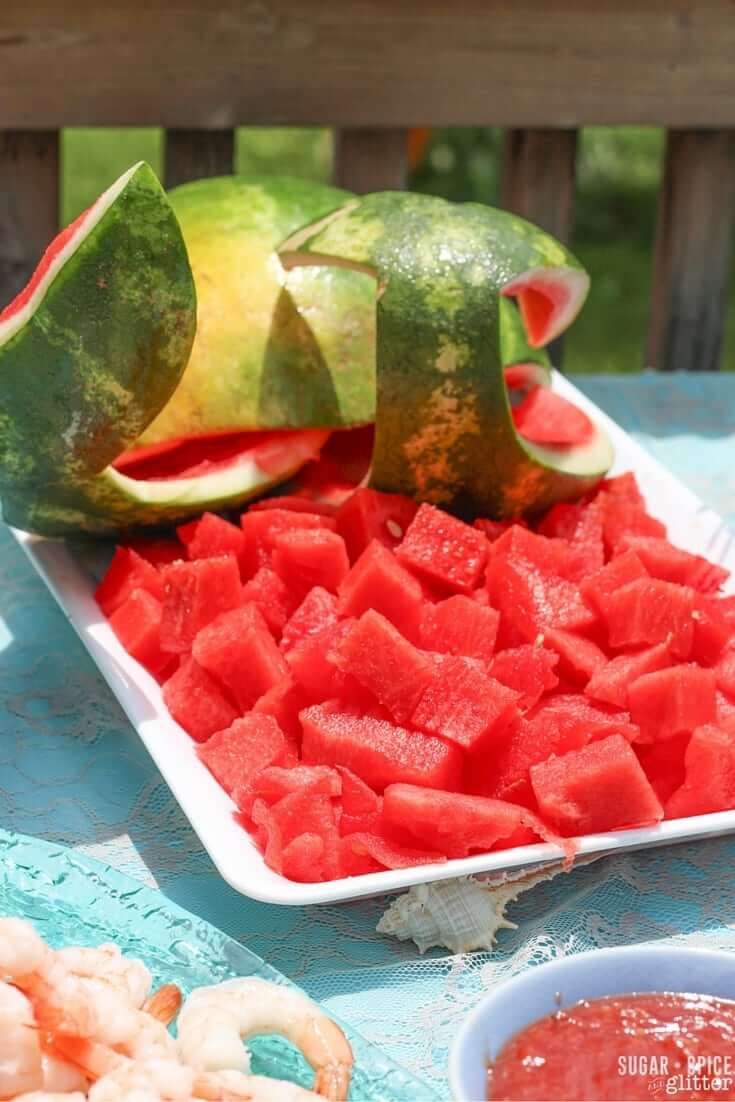 I’m not really a fan of cheap goodie bags, so we tend to put quite a bit of effort into ensuring that each child leaves with a thank you gift that they are going to love. We had a variety of ages and I wasn’t sure how interested in mermaids the rest of the party attendees would be so we went with a variety of ocean-inspired gifts and allowed guests to choose what they took home.

The older kids were allowed to choose from a mini ocean play dough kit, a mermaid craft play set, or a mermaid wand – the cost of the starfish made the wands about $4 each (the ones with seashells were about 40 cents) and the play dough kids were less than $2 each to put together. (I think the play sets were $2 from the dollar store.) They were also allowed to grab chocolate coins and plastic rings (“mermaid treasure”) and received a pair of mermaid sunglasses that were about 69 cents each.

Younger kids got a package of sand toys.

We also had a sand art craft that kids could make and take home. 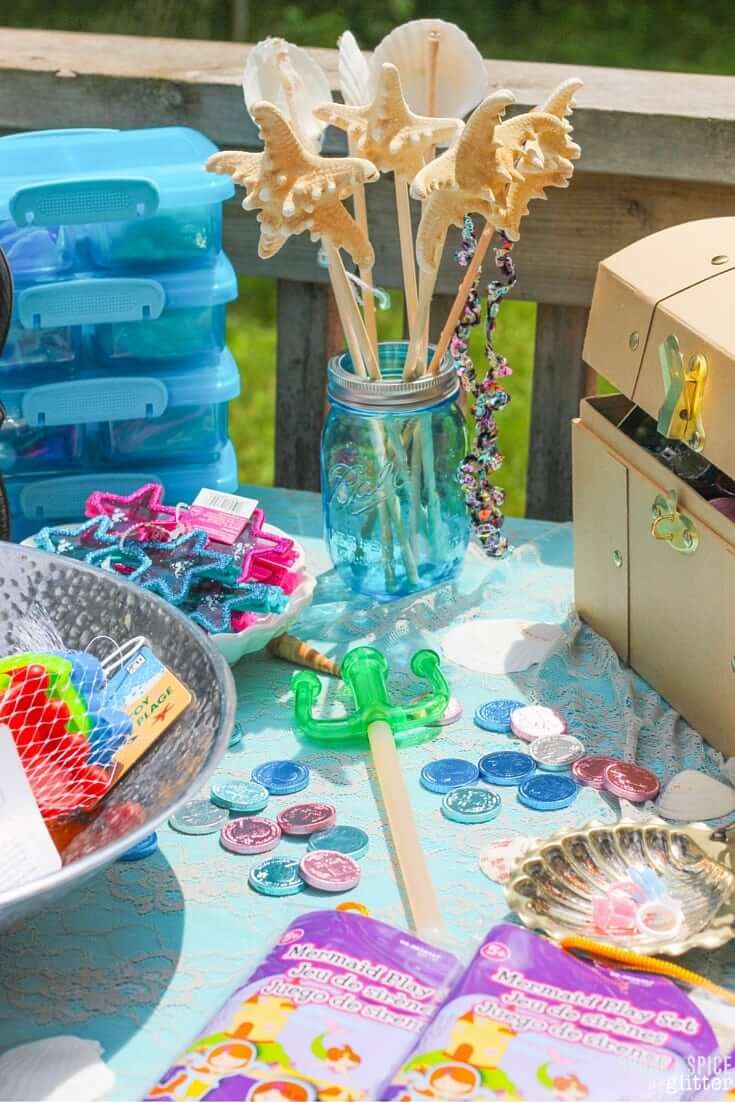 If you have a summer baby, the itinerary practically plans itself – something to do with water! If you have a pool, you’re all set, and if not, a splash pool or just some water activities are perfect for this age range (and actually more preferable for safety reasons).

Be sure to provide a couple of non-water based activities for kids to do when they need a break from the water, for immediately after eating, or for kids who are afraid of joining in the water activities. We usually rely on crafts for low-key activities that kids can do at their own pace, and for this party we set out an ocean play dough invitation and sand bottle art.

If you have a birthday in a colder month and don’t want to rent a time at your local pool, here are some fun mermaid party games and activities to keep your guests busy and happy.

Other Special Touches to Our Mermaid Party

My stepdad made Ella a Mako mermaid trident (inspired by the TV show) and a friend gifted her this beautiful costume. We had each of the kids stand and do a picture in front of the fish scale wall which I sent to the parents after the party along with a note thanking them for their gifts and attending.

Ella also made her very own mermaid tiara (not shown) – but if we were to make it again, I would use a sturdier metal tiara rather than the plastic one we used as our base.

We also made a play list of mermaid-inspired music, mostly from mermaid movies and TV shows, but also some ocean- or beach-themed classics:

Overall the party had over 40 guests and came in at just under $150. 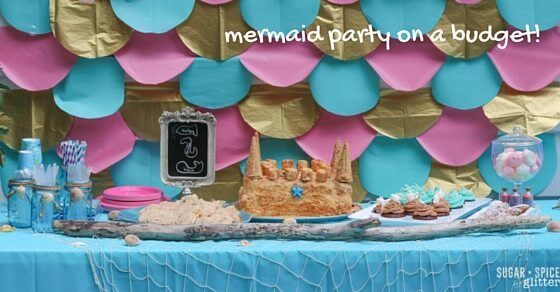 Do you have a little mermaid with a birthday coming up? What have been your child’s favorite party themes?

For more party inspiration on a budget, check out our Fruity Summer Popsicle Party and our Teddy Bear Picnic Party. 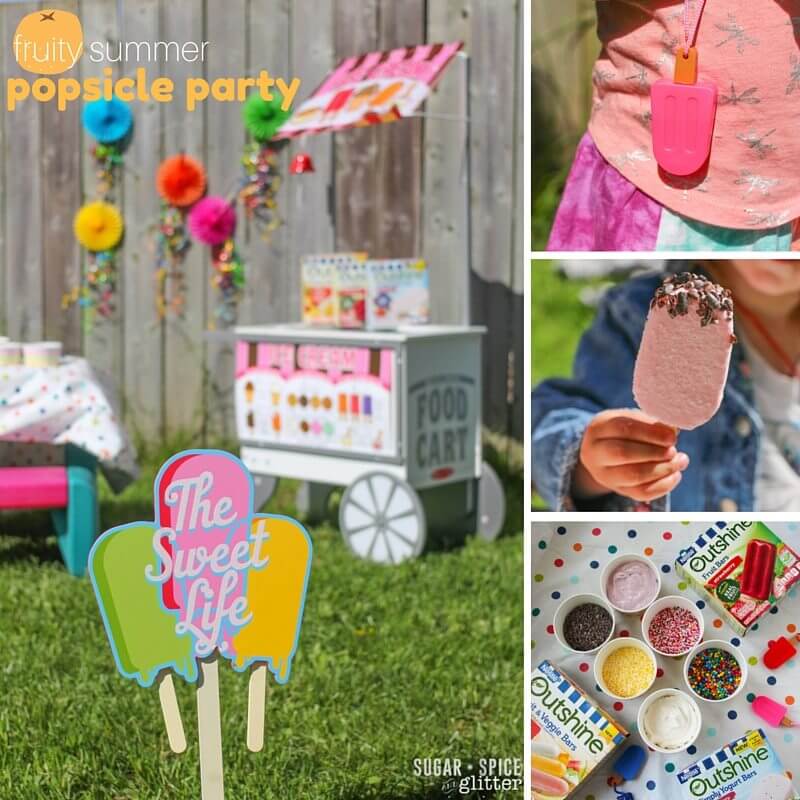 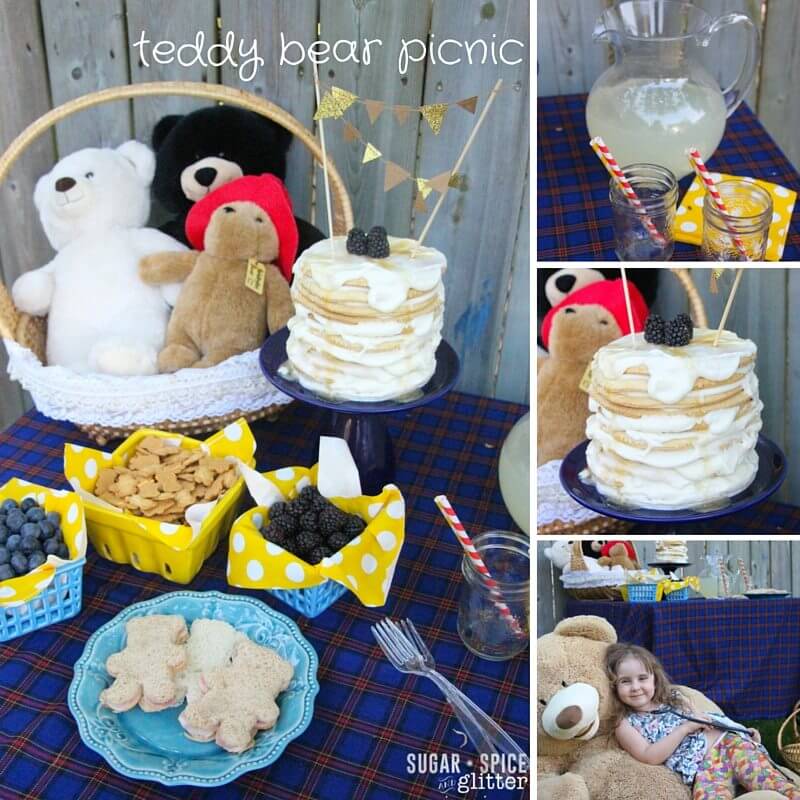 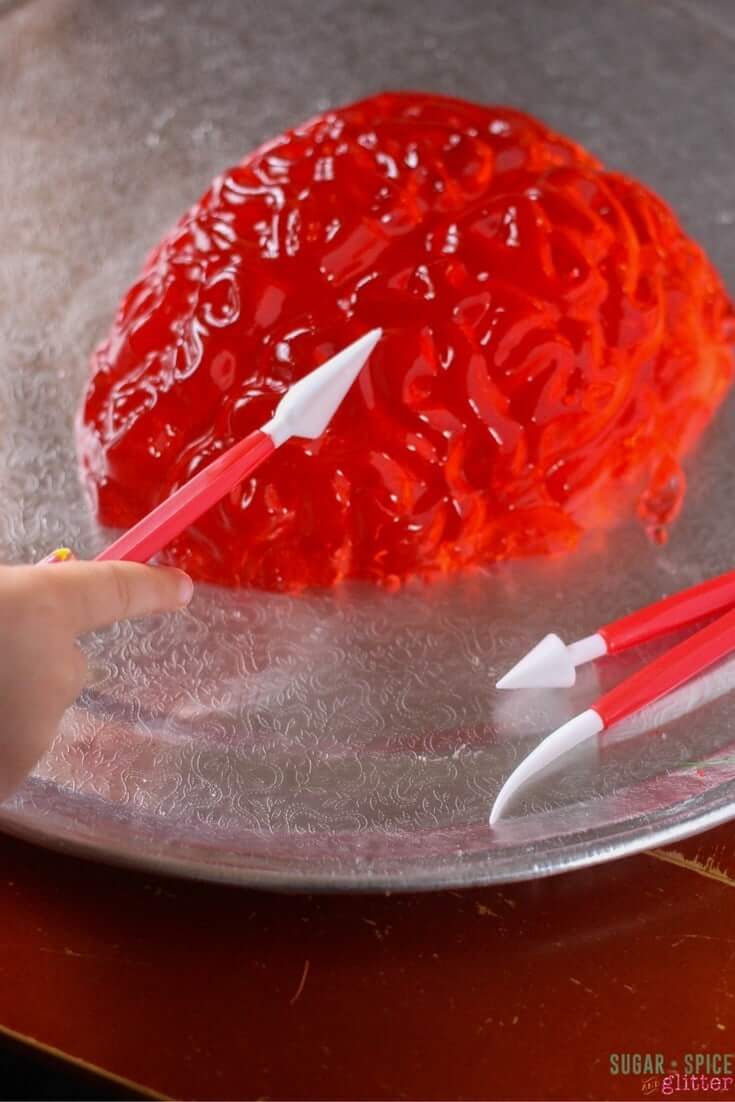 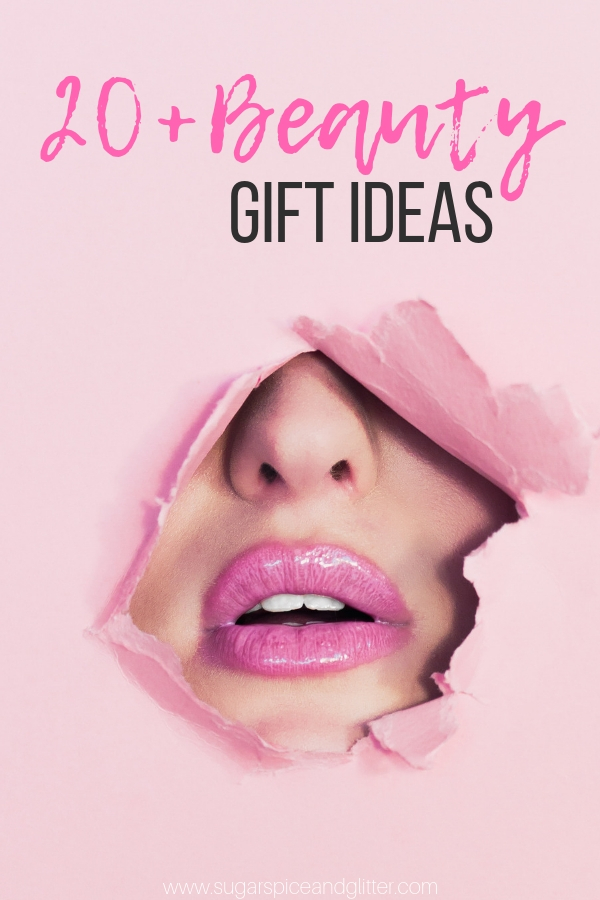 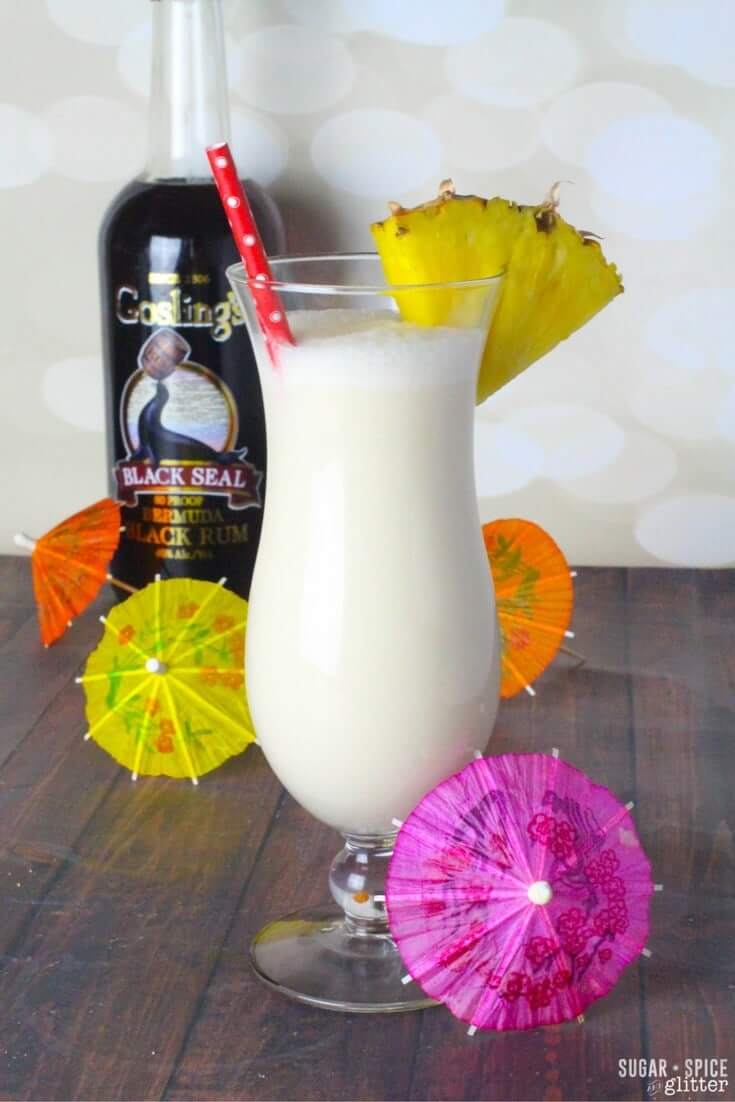