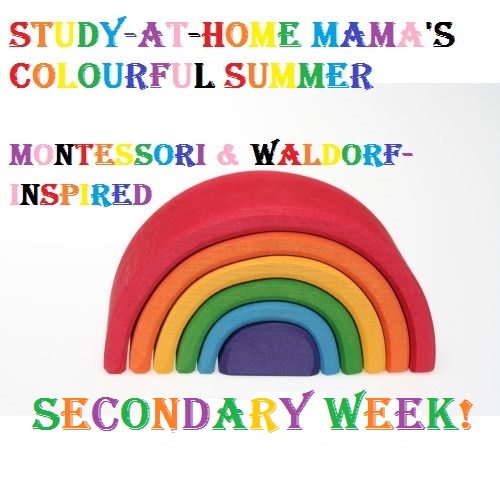 Its secondary colours week on the Sugar, Spice and Glitter’s blog! After two weeks of purple (at Ella’s request), its time to mix things up!
If you haven’t started your colour study weeks yet, I have a little extra incentive for you — if you start this week, you will naturally arrive at Secondary Colours Week in time for Hallowe’en! And if you look at the secondary colours, you will see that they will be out in full force during Hallowe’en and will help a child focus less on the darker colours (and themes) that often dominate Hallowe’en decorating.

Despite our secondary week falling during the summertime, Ella still wore some Hallowe’en clothing because a couple of her shirts from last year incorporated all of the secondary colours we were studying. It was also fun to try and build outfits that included each of the three colours!

For artistic inspiration, I relocated one of my Gunn Harlin prints which incorporated the three colours (in a very natural and non-garish way) above Ella’s art table. I also think that this butterfly print would be perfect.

For our first sensory bin, I continued Ella’s fascination with waterbeads and made a bowl of purple, green, and orange waterbeads. After a good half hour or exploring and sorting the beads, I introduced some secondary-coloured bath toys (orange octopus, anyone?). 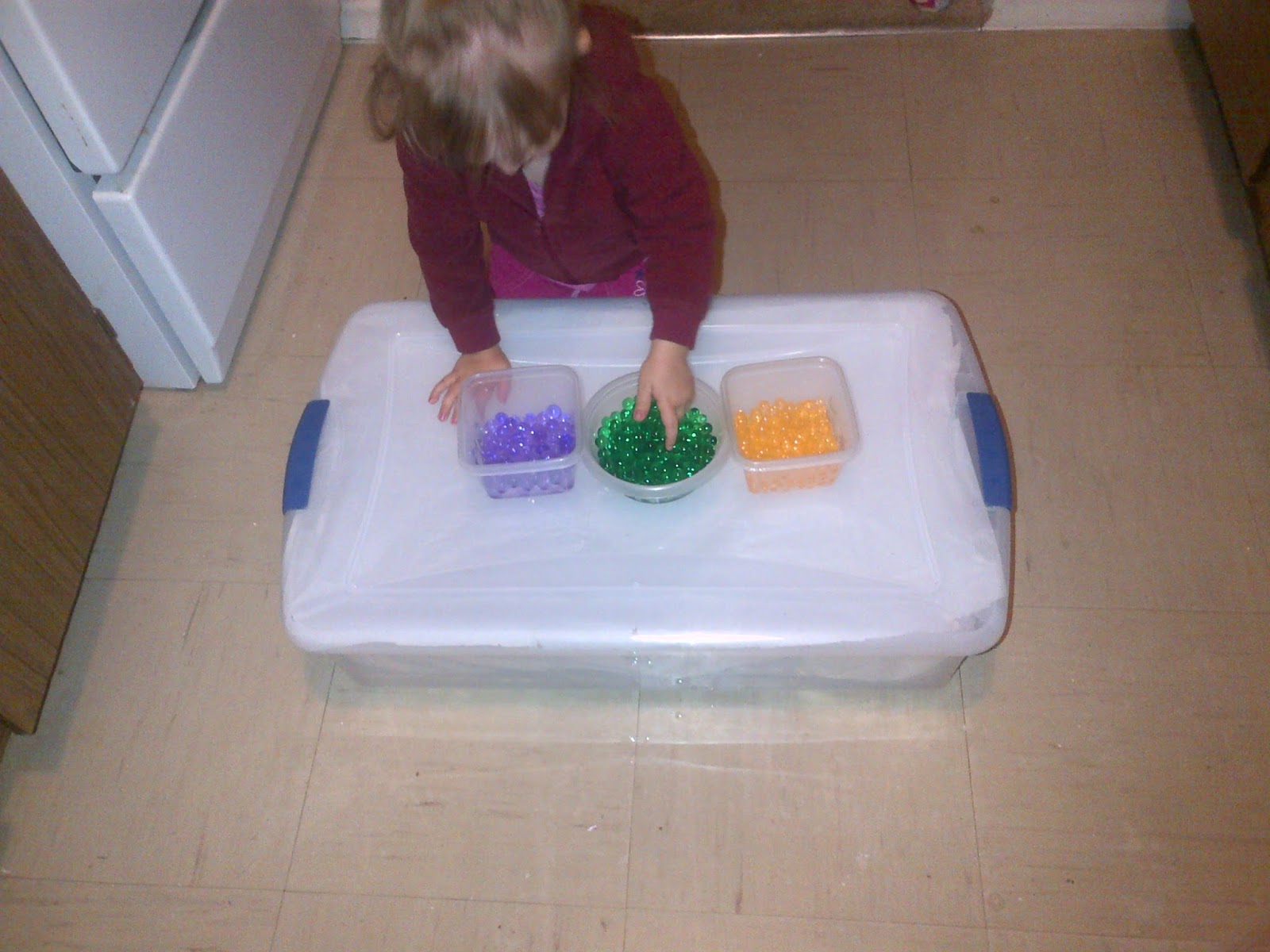 For our second sensory bin, I used  green lentils, dyed purple rice, and orange pompoms. If my orange lentils were not organic and pricey, I may have used those! On the bottom of the bin, I hid secondary-coloured wooden shapes for her to discover, as Ella is really enjoying identifying and exploring shapes.

For nature study, we tried to identify purple, orange, and green items during our time outdoors — which was not at all hard to do!

And then, we got busy with the light table! 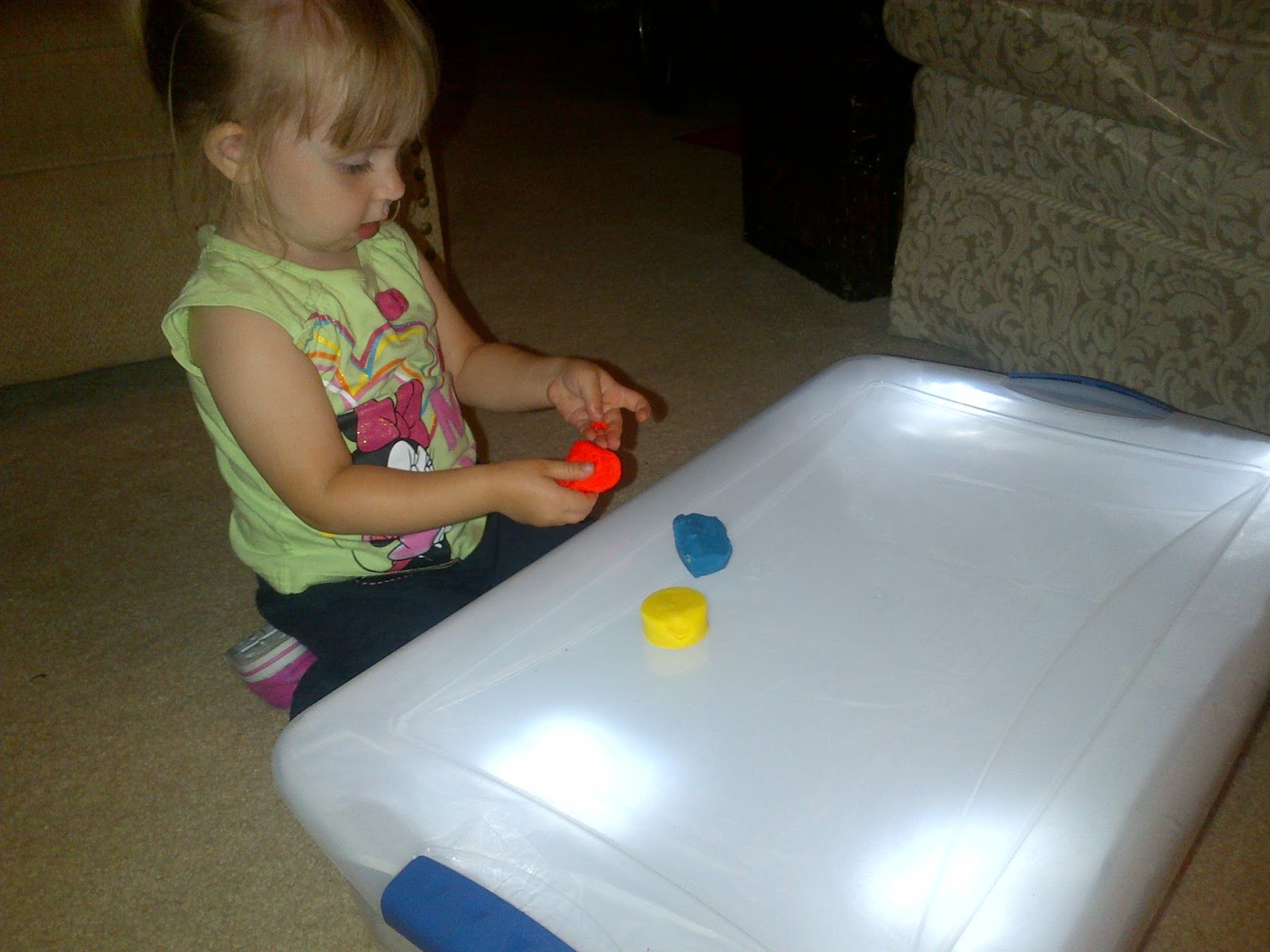 I usually make our own play-dough, but this week we used some leftover (from last Hallowe’en) PlayDoh so I’m not sure if the effects will be the same with homemade — I will have to try it out soon!
Ella, in her orderly nature, kept the colours pretty separate during her exploration, only delicately attaching the colours together, so I showed her how the primary-coloured playdough could be meshed together to make secondary colours. 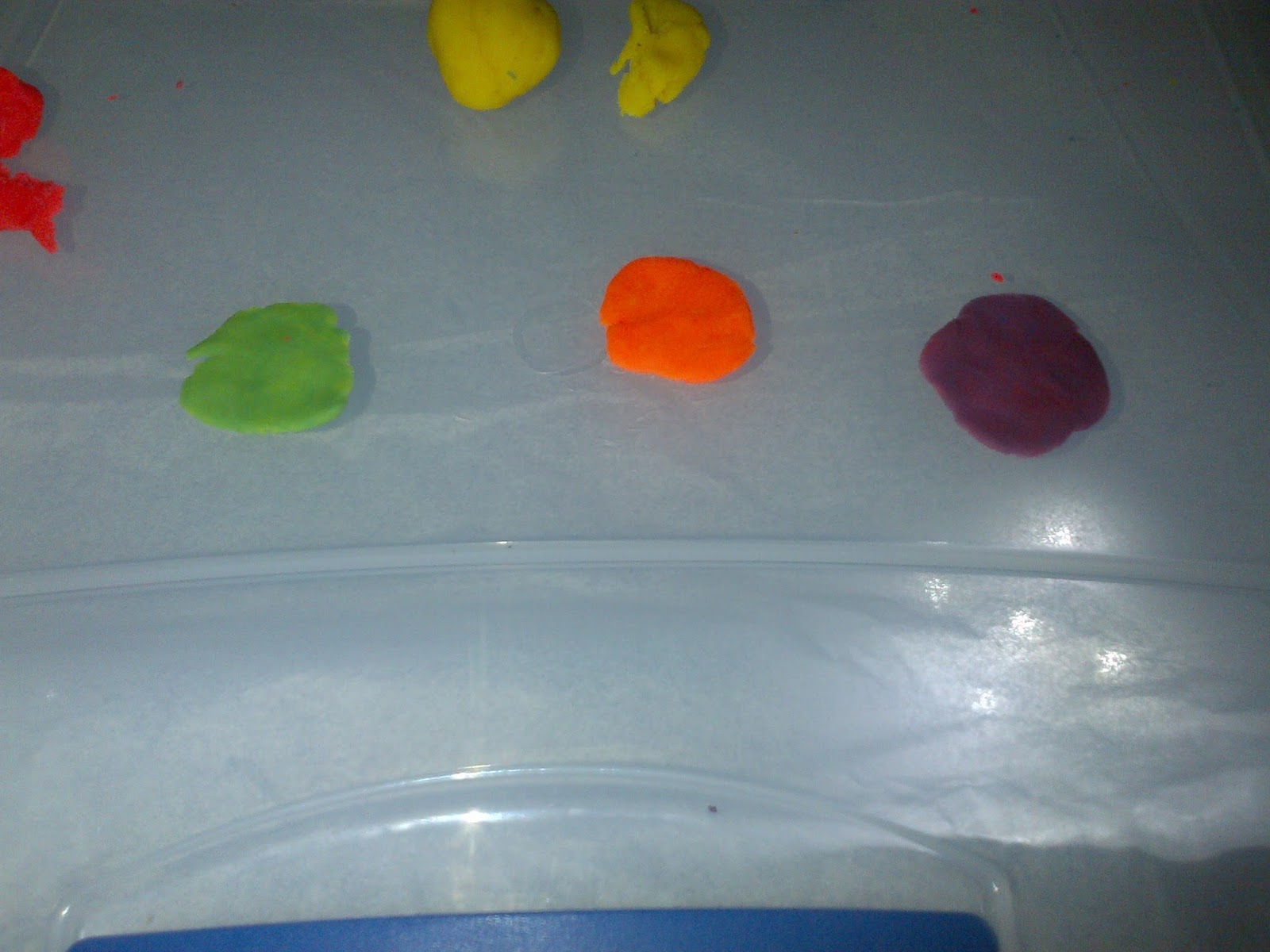 This created new play possibilities, but she still kept the colours separate, only meshing together enough to make purple. I love how she integrated this new information into her play but didn’t allow my demonstration to take over her play. 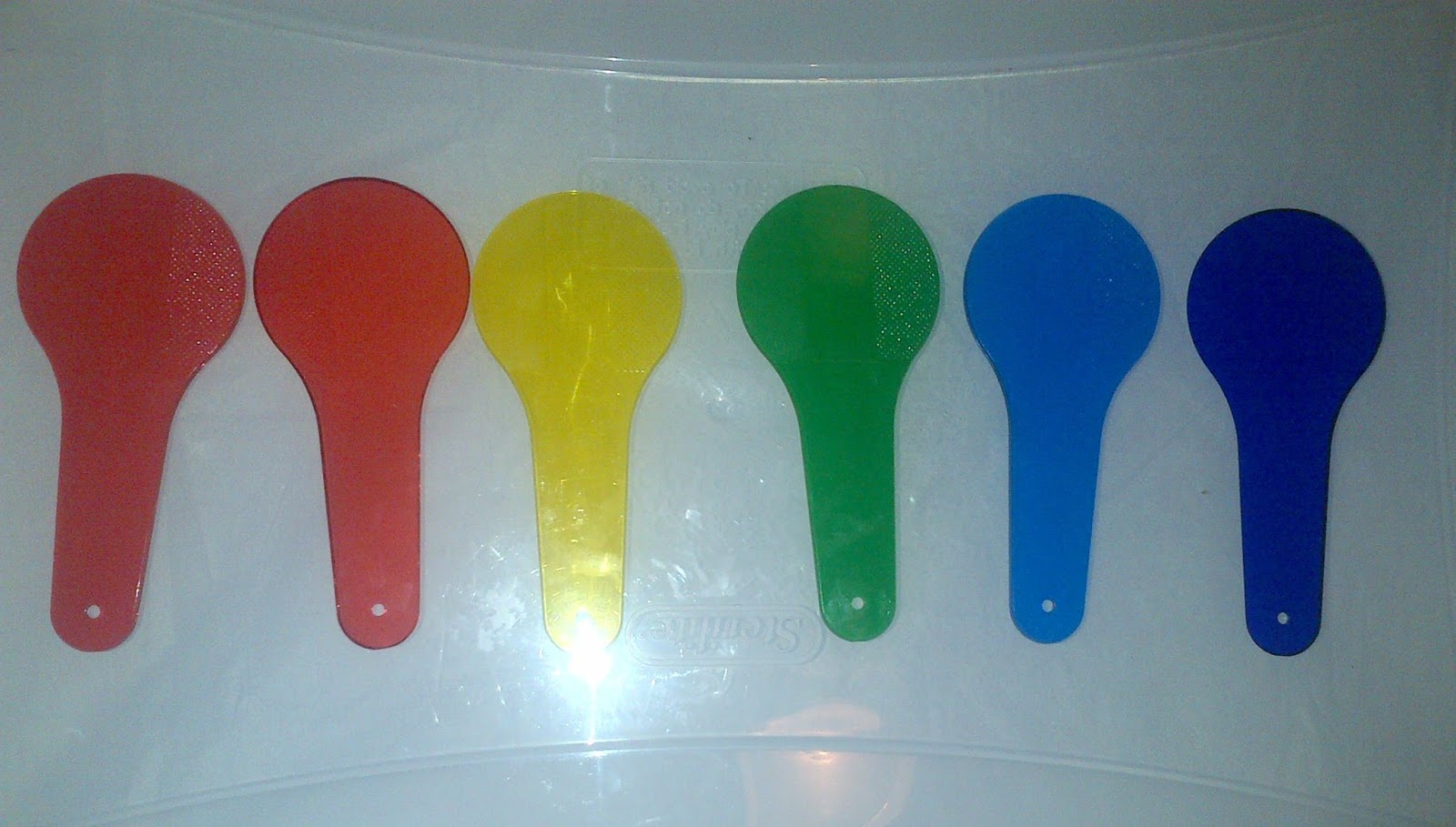 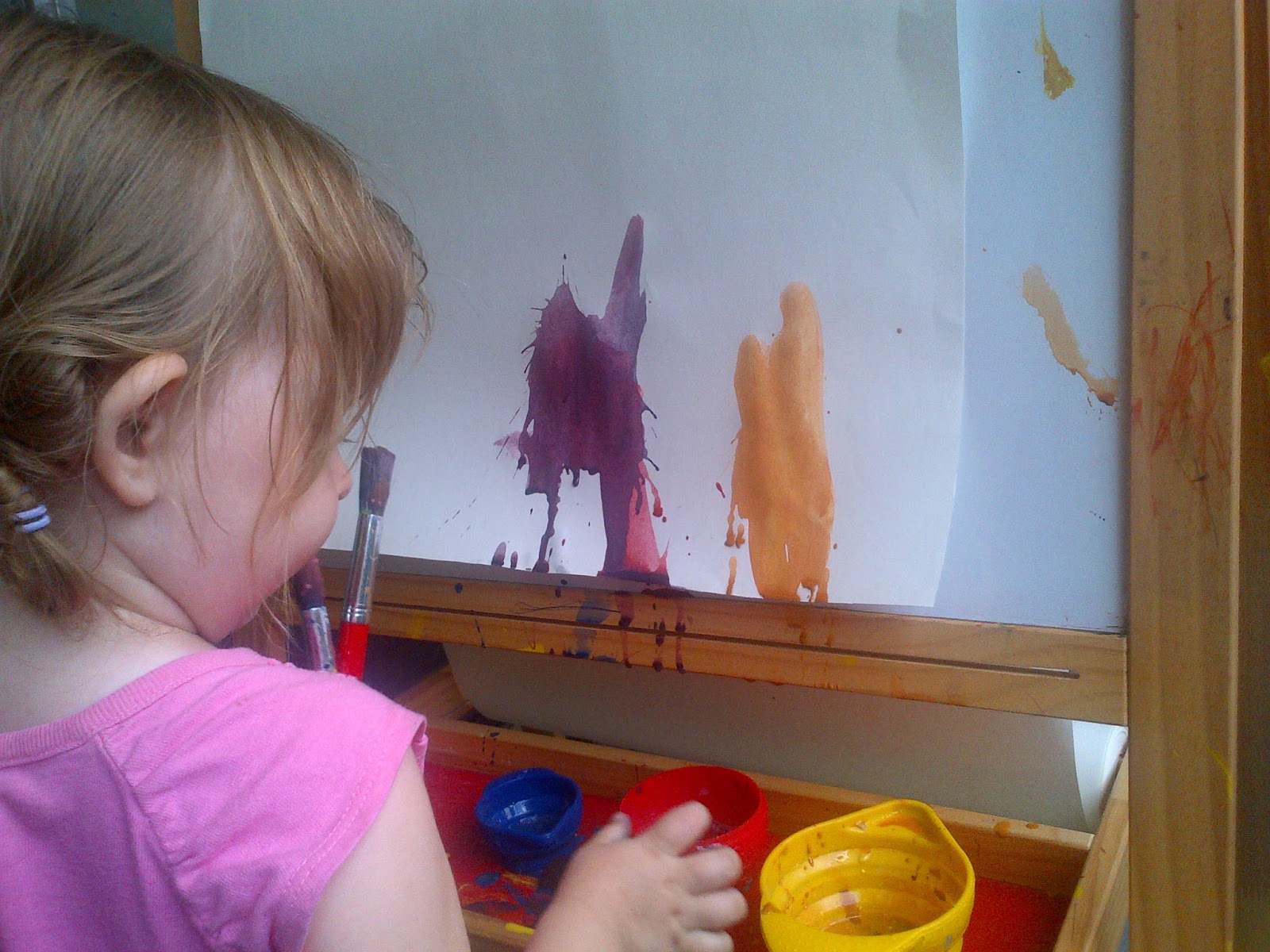 Later, we mixed colours on paper, creating orange and purple. Ella was not interested in making green, as per usual. I usually store our paints in mason jars, but as the activity was colour mixing, I (accurately) predicted that Ella would eventually want to mix the paints in their containers, so I used smaller vessels with smaller amounts of paint. I really encourage trouble-shooting the prepared environment; know yourself, know what’s probably, and protect your limits. (This is also why some messy activities are great to do outside…) Colour mixing, colour recognition.

I couldn’t think of any secondary colour books that weren’t Hallowe’en-themed, so we just read a few Hallowe’en books: “Monsters, Monsters” and “Frankenstein” (the latter being a parody of Madeline). Ella loved these books and I think its good to prepare children for the potential scary bits of Hallowe’en by introducing them as silly creations, preventing (some) children from drawing their own scary conclusions.

For food, we ate purple, pink and sweet potato french fries, kale chips, salad with canned mandarin slices and blueberries (almost purple), purple and orange carrots and peas, and ratatouille (eggplant, zucchini and cheddar cheese). I also found Goldfish Colours, which I was pleasantly surprised with the ingredient list for, as it contained none of the ingredients that I look out for in prepackaged snacks. The package contained yellow, purple, green, and orange crackers. Ella was pretty excited… 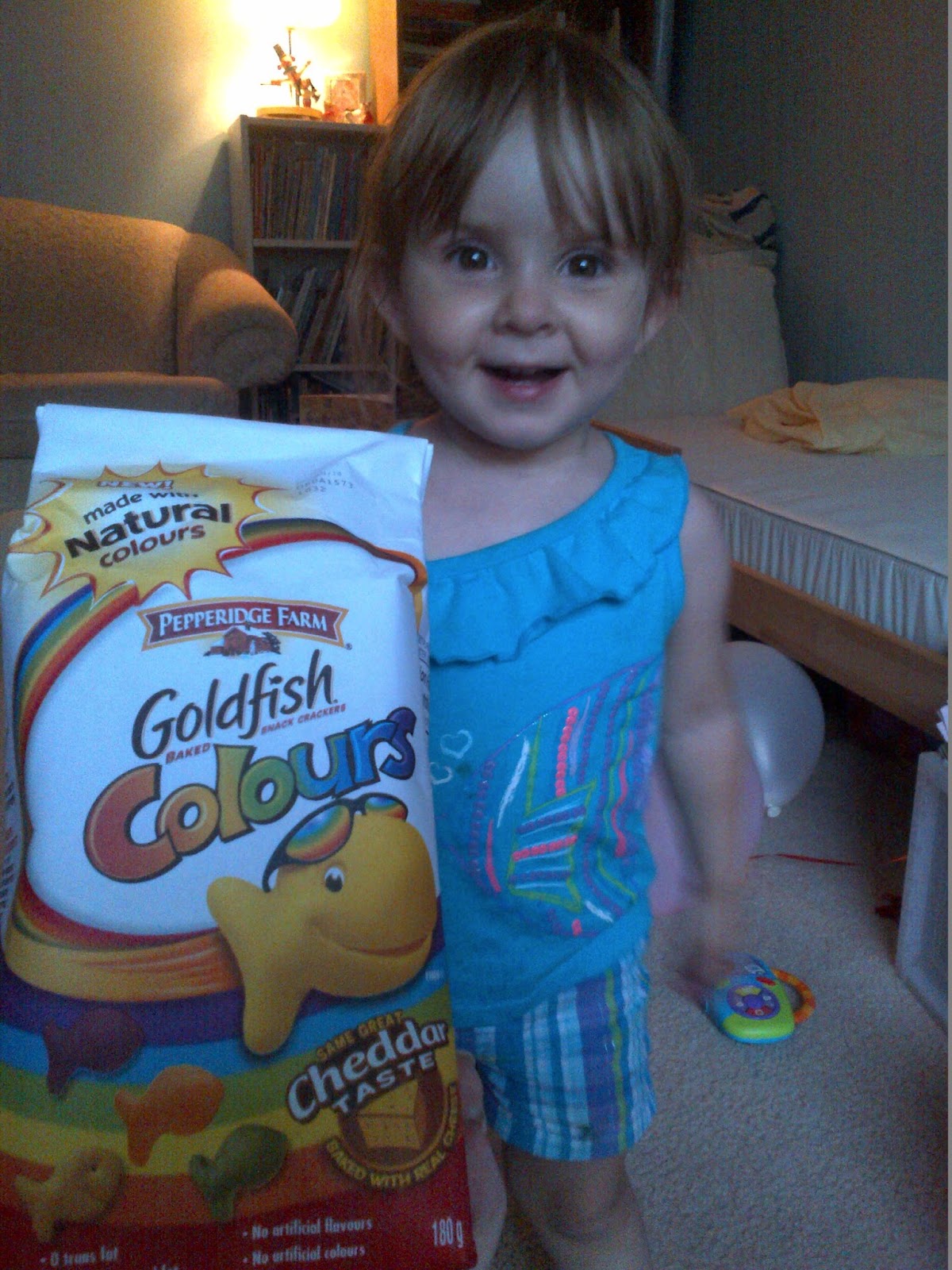 How will you celebrate secondary colours week?