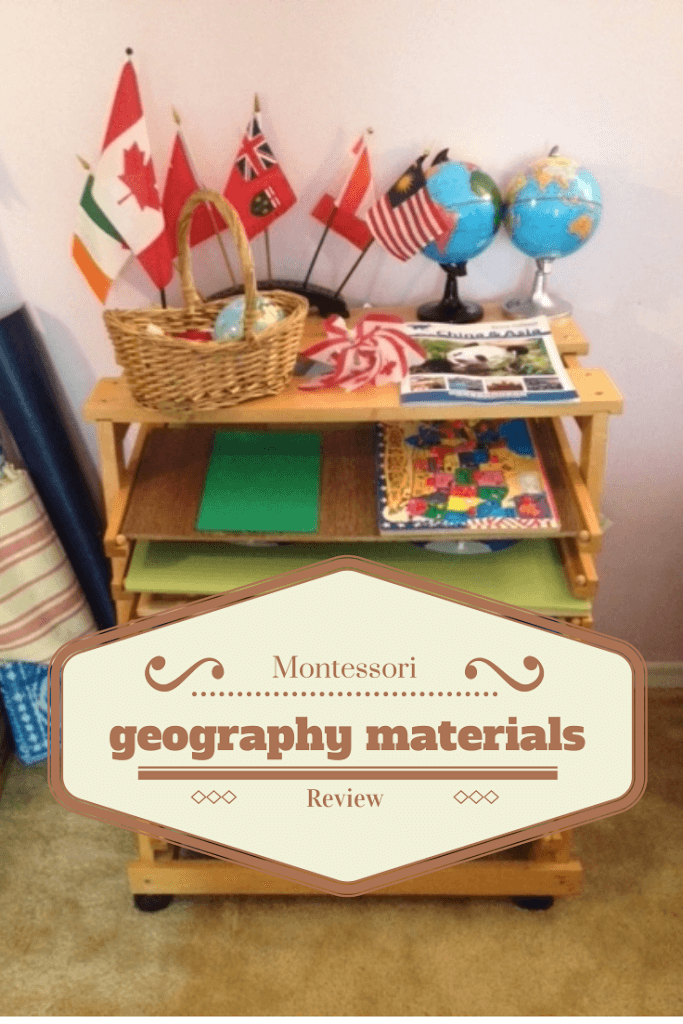 A few weeks ago, I reviewed my Montessori Math and Sensorial materials. Today, I’m reviewing our (few) Geography materials, which fall under the Montessori Culture curriculum.

I’m in love with our Geography cabinet and it is one of Ella’s favourite aspects of our Montessori work room. We bought the actual cabinet second-hand from a local preschool that was down-sizing, and then slowly acquired all of the maps and materials you see here. (And there’s more on the way!)

I’ll detail all of our current Geography materials soon, but here I’ll just review the ones that are “official” Montessori. 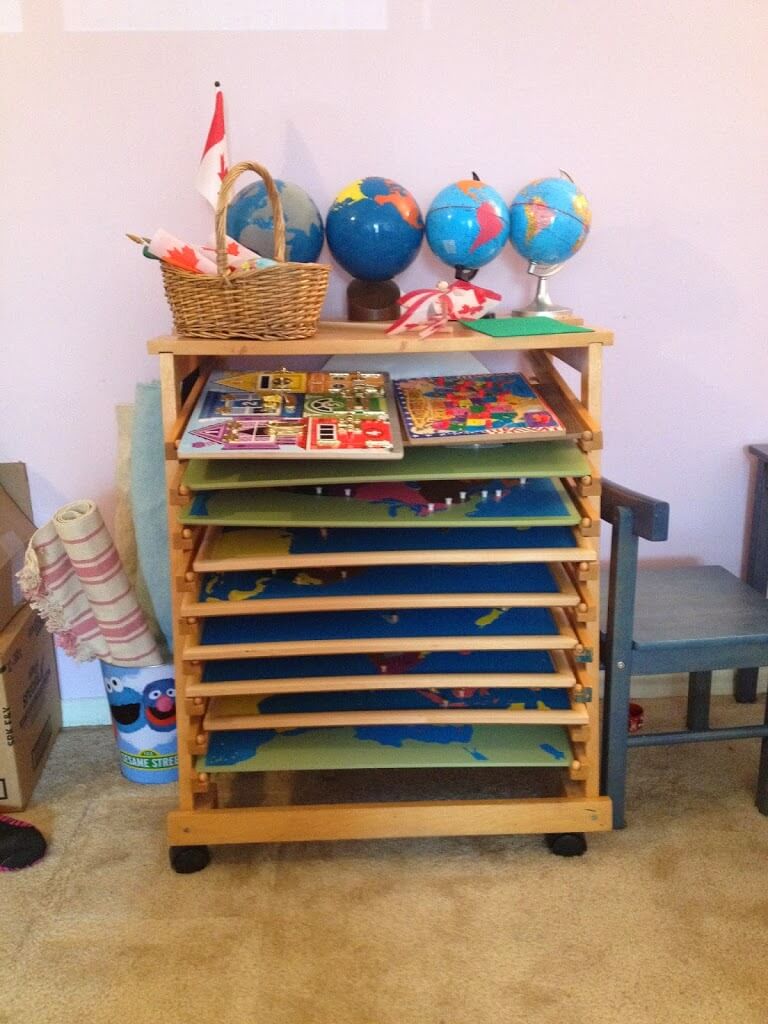 Land and Water (Sand) Globe, Adena, $15 (compare to $64.20 Nienhuis)
Continent (Colour) Globe, Montessori Equipment, $20 (compare to $64.20 Nienhuis)
The store-bought globes… are not my favourite. I had originally DIYed a set of globes before buying this set, and after a month of staring at them, I decided to send the store-bought version forward to another friend! My DIY version was just more precise and I felt the store version looked sloppy and unattractive. (The colours are also not an exact match to the maps, which I found odd.) Both of the globes quickly came off of their stands, which they are screwed onto. This might be less of an issue with children who carefully pick up the globe from the base, but with the Sandpaper one the removal happened within an hour of owning it, so I feel like it would have still come off eventually even if it had been handled more gently. The sand never came off of my store-bought “Land and Water” globe which I have heard happened to others who purchased from the same store. 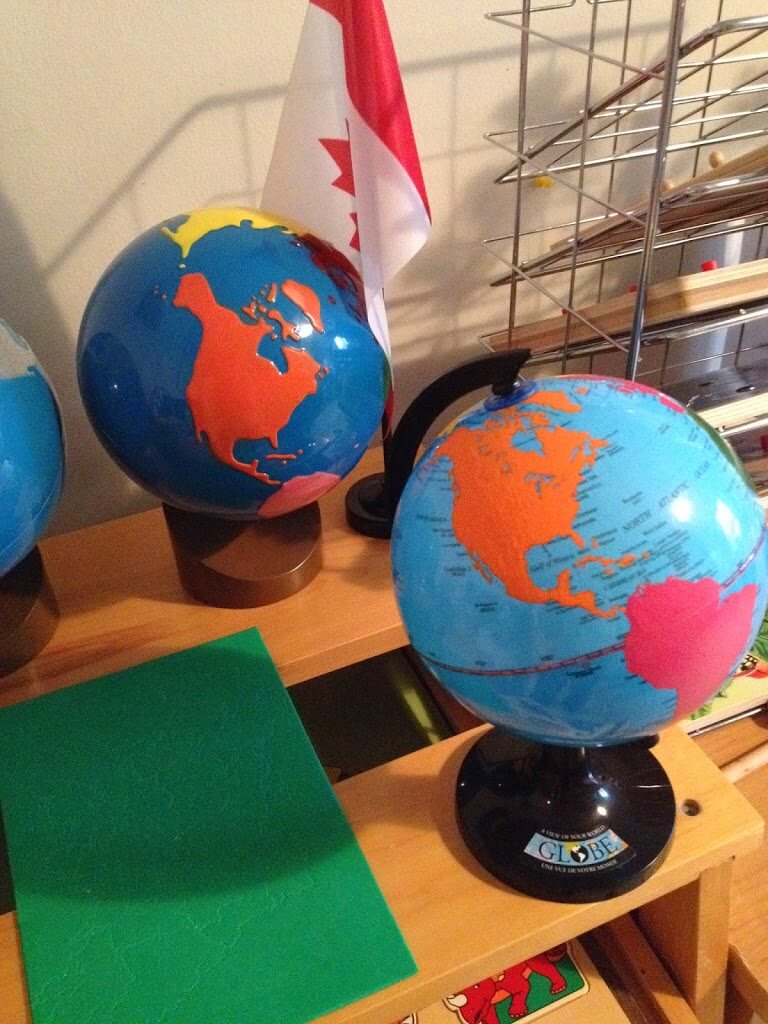 The Montessori set has only lost one peg and the pegs are properly located on each countries’ capital. I’ll go into detail on each map below. I won’t deny that the maps are still expensive if you decide to buy all of them, but for us it was worth it rather than invest the time in a DIY, especially since Ella is obsessed with the Culture curriculum. If you are able and interested in doing a DIY, I love Imagine our Life’s felt maps.

Also, there is this fun set from Teach My (a Canadian company!) for Continents and Animals that uses the Montessori colours (unlike most commercial products). Please please please, if you buy a different Montessori-inspired map, ensure the continents are coloured properly. The whole point in these colours is that they correspond to later materials — and unless you are going to DIY everything based on this new colour scheme, its going to be a major headache later.

I originally purchased a used pair of Grandpa’s Montessori maps (world and Canada) that were good quality, just in case you ever come across some used materials from them (as they are now closed). 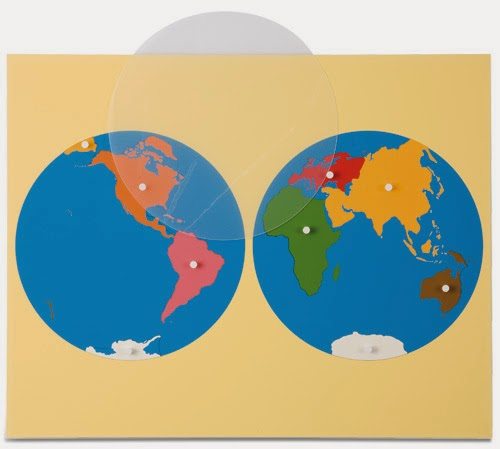 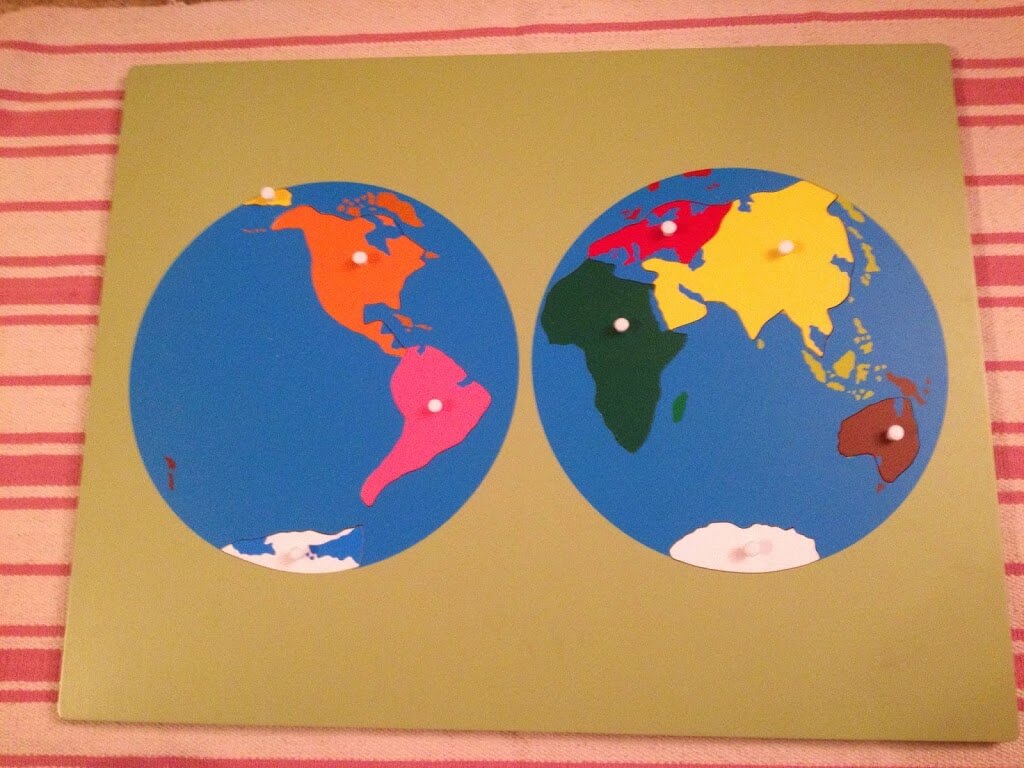 Just to give an idea for comparison, the stock image for Nienhuis is on the left, while an “in real life” image of my Montessori Equipment is on the right. There are very slight differences, noticeably the colour, that I don’t think detract from the work. I like that both feature the brightly contrasted white “capital” peg. I purchased the “North American” orientation map because we are learning in North America.
Our world, Canada, and Europe maps are all “unframed” and I don’t notice a functional difference. They sit in the map stand slightly better, but not enough that I would avoid or prefer one more than the other. If anything, the framed maps are slightly more attractive. 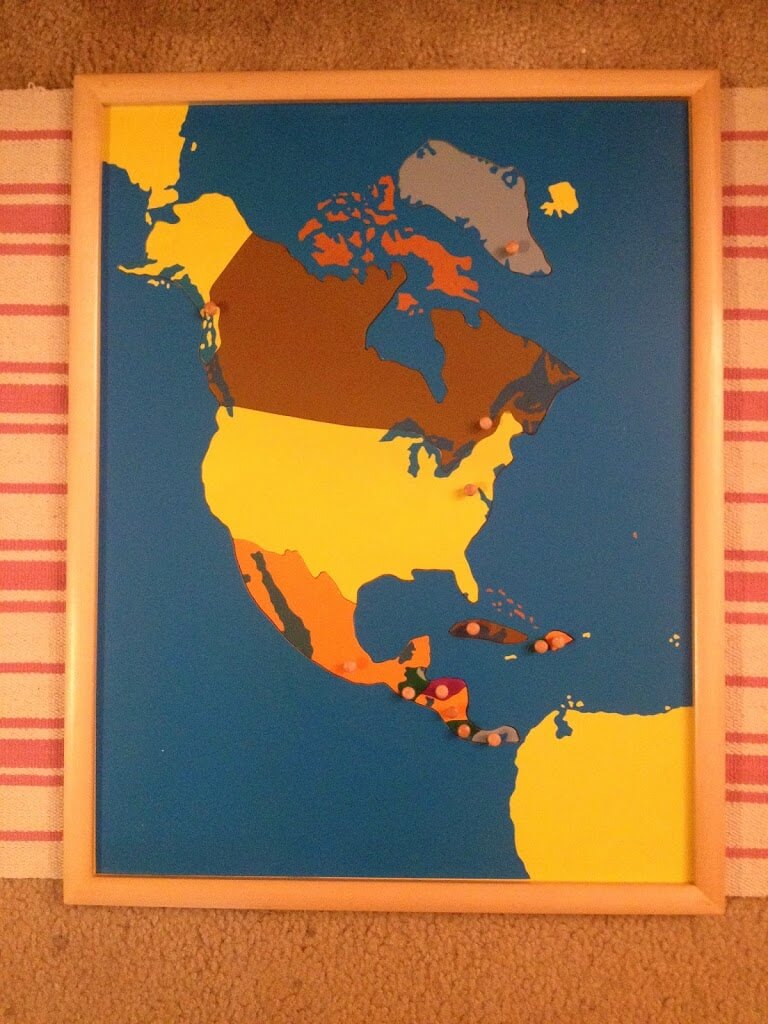 This is the map that I am most concerned that pegs will fall off due to the location of the capitals. It follows the Nienhuis colour scheme, but I will never understand why it has to be so dull-looking. I think a big error was made with painting American (and its removed Alaskan state) yellow, which to me makes it look like all yellow land on this map belongs to America (as yellow has become the standard colour for countries that are not part of the featured continent — see the peaks of Asia and South America). This is more of a concern on this map because of the separated nature of Alaska — there are other maps that have yellow countries, but they don’t have a separated land mass that lends to confusion. 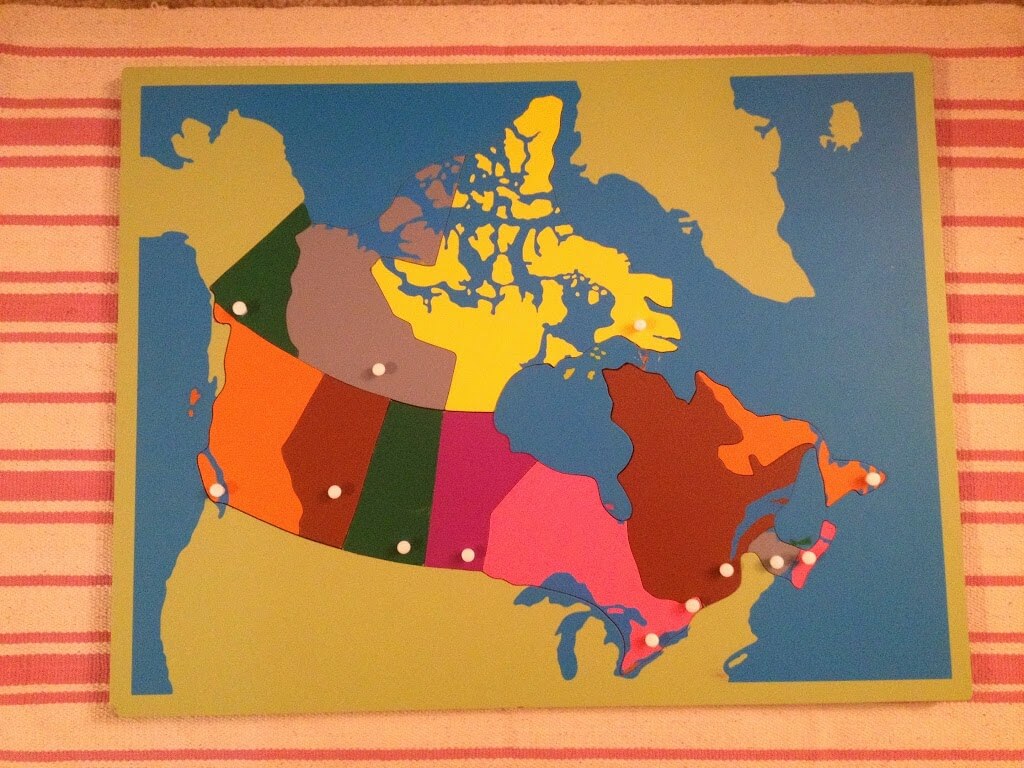 Canada Country map, Montessori Equipment, $32 (compare to $129.50 Nienhuis)
I think its great to have a country map for your own country, and I find this colour scheme attractive, despite the icky yellow that was used for Greenland and America. I’ve been surprised that the pegs haven’t come off, and more happily surprised that this is politically correct and current in the inclusion of Nunavut. 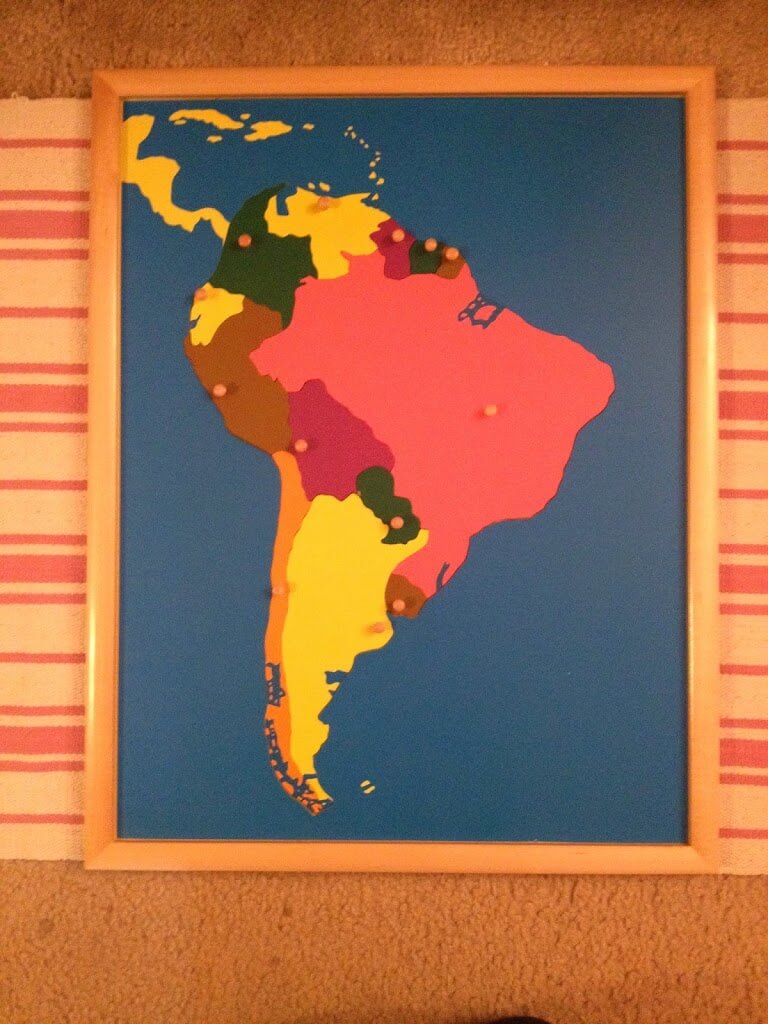 South American Continent map, Montessori Equipment, $32 (compared to $119.50 Nienhuis)
I have no issues or concerns with this map. Politically accurate. 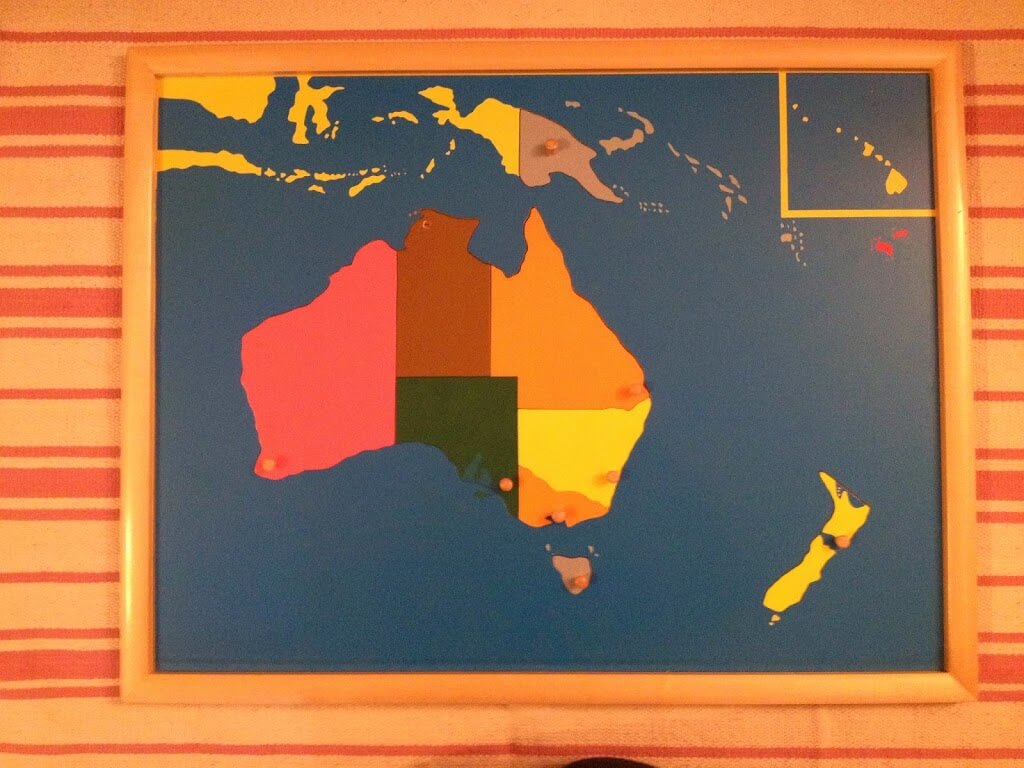 Australian Continent map, Montessori Equipment, $32 (compared to $112.50 Nienhuis)
This is kind of a two-in-one map, which some people could definitely take issues with. While New Zealand and Papau New Guinea are given puzzle pieces (as they would in a continent map), all of the Australian provinces have been given a piece, too (as they would in a country map). This is potentially confusing, as the children could mistakenly understand the different provinces to be their own countries, or understand New Zealand and Papau New Guinea to be provinces of Australia. Ella loves Australia, though, so we’ve spent a lot of time on this map and discussing this “error.” 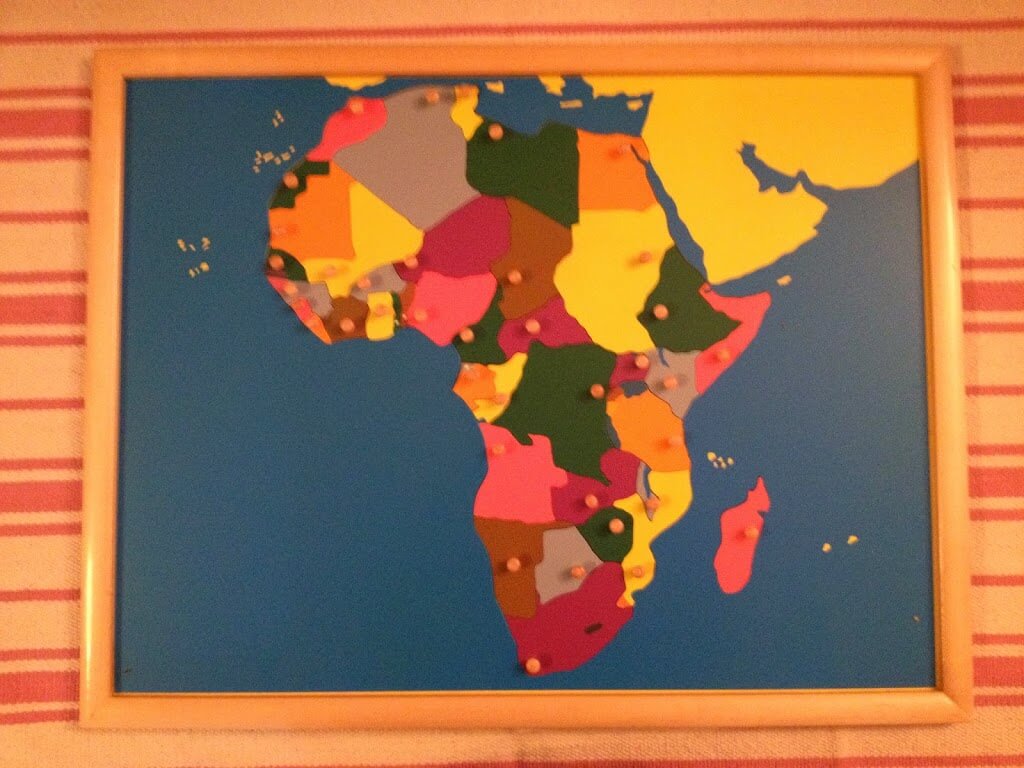 Africa Continent Map, Montessori Equipment, $32 (compared to $139.50 Nienhuis)
Possibly the map I find most beautiful (likely due to the bevy of colours). Politically accurate. 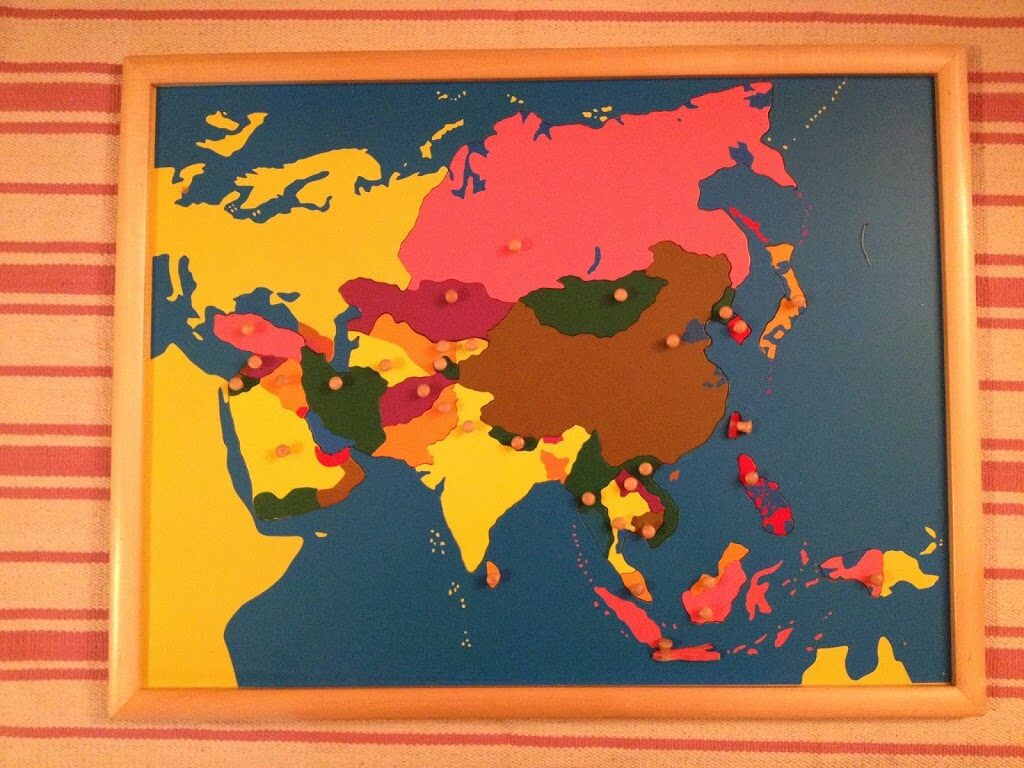 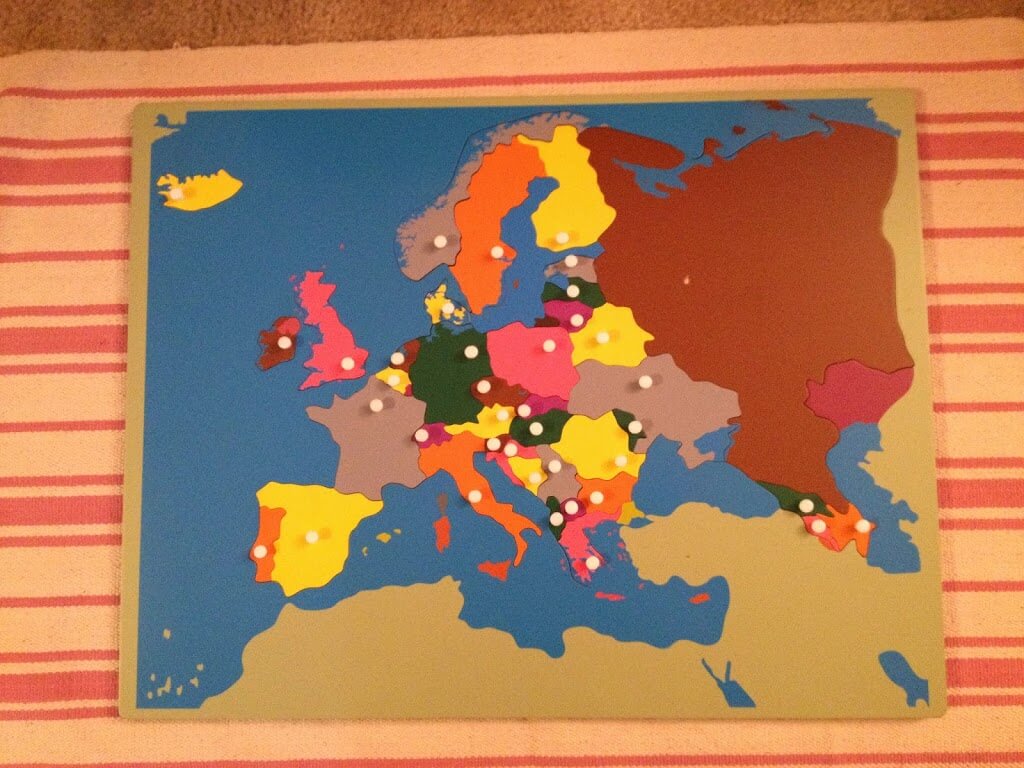 We also own the Montessori Equipment Unlabeled and Labeled control maps, which are an easy (but not necessarily quick) DIY if you want to have the full set. It took me about 15 minutes to make a control map by tracing each piece onto a dollar store piece of bristol board (50 cents). They were $3.50 each, but just like the maps, they add up!

Essential Materials
If you are only able to purchase (or DIY) a couple of these materials, my best recommendations would be the Colour Globe, as well as a map for your own continent. If you could also affordably find a map for your country I would add that as well. 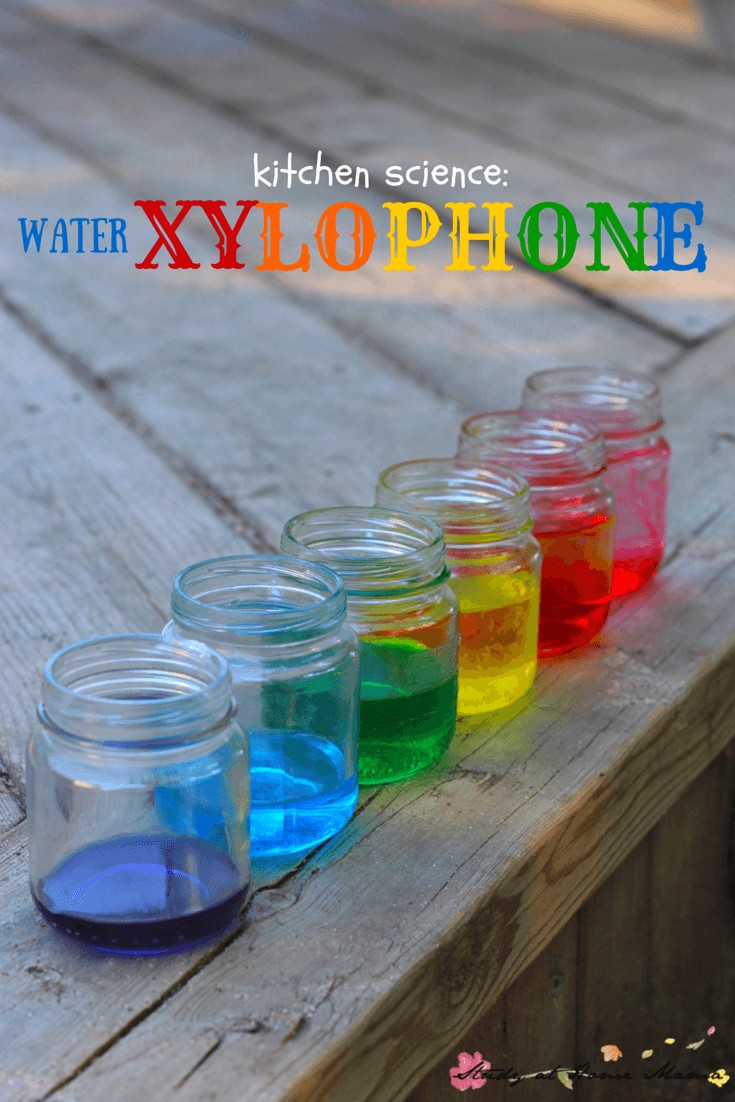