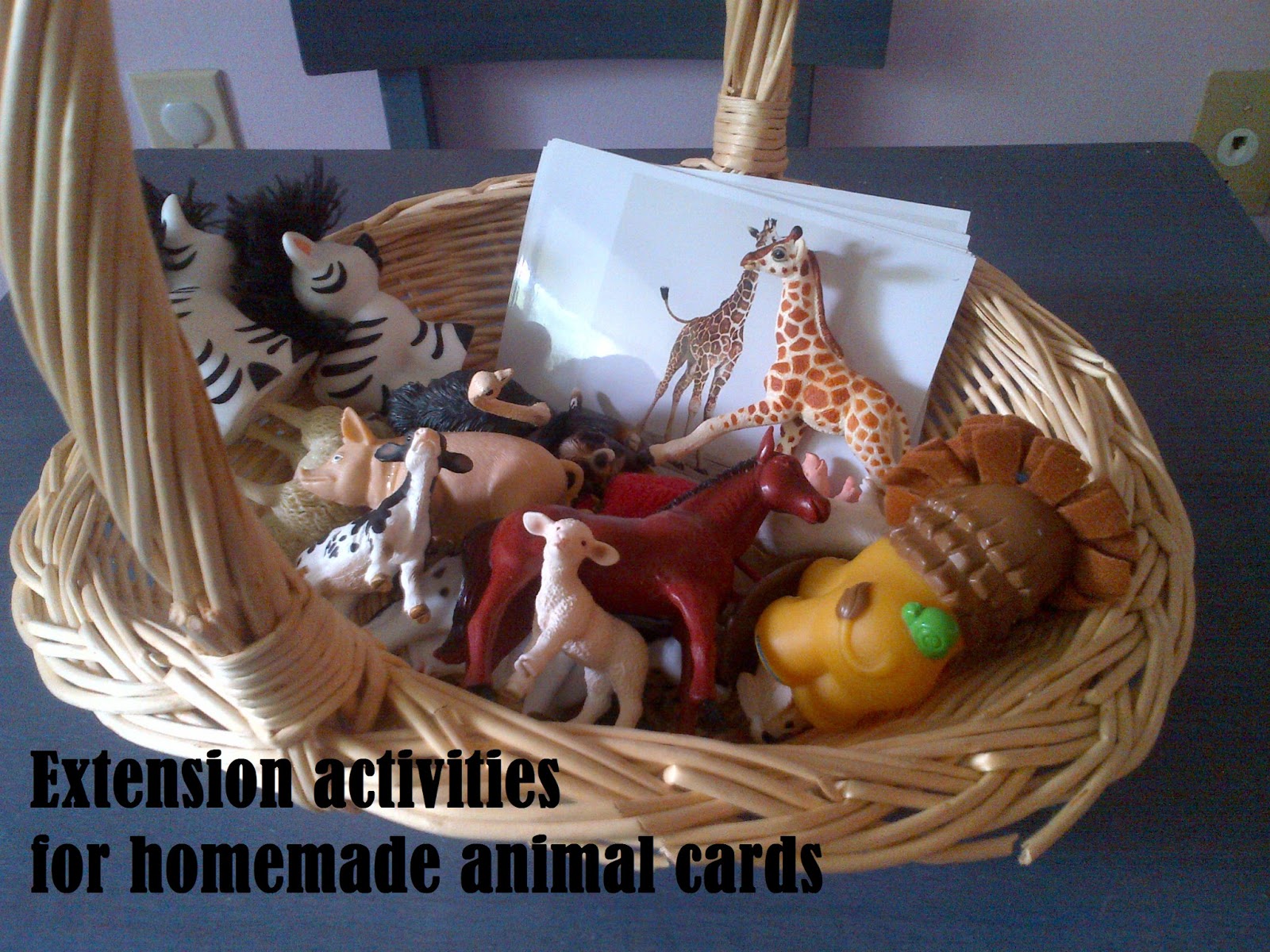 My favourite homeschooling materials are the ones that can be utilized in several different ways, especially via extension activities.

Extension activities occur when we build upon simple and mastered activities. It is important not to rush our children along the simple activities before they have mastered them and feel comfortable moving to the next level, even if we know that they are going to enjoy the extension more than the original activity.

I printed simple animal cards to match the majority of our animal collection (some animals I am still hunting for good images), and had them printed at Costco’s photo department so that they would have a nice tactile finish, and also because I didn’t want to completely kill my printer’s ink supply. 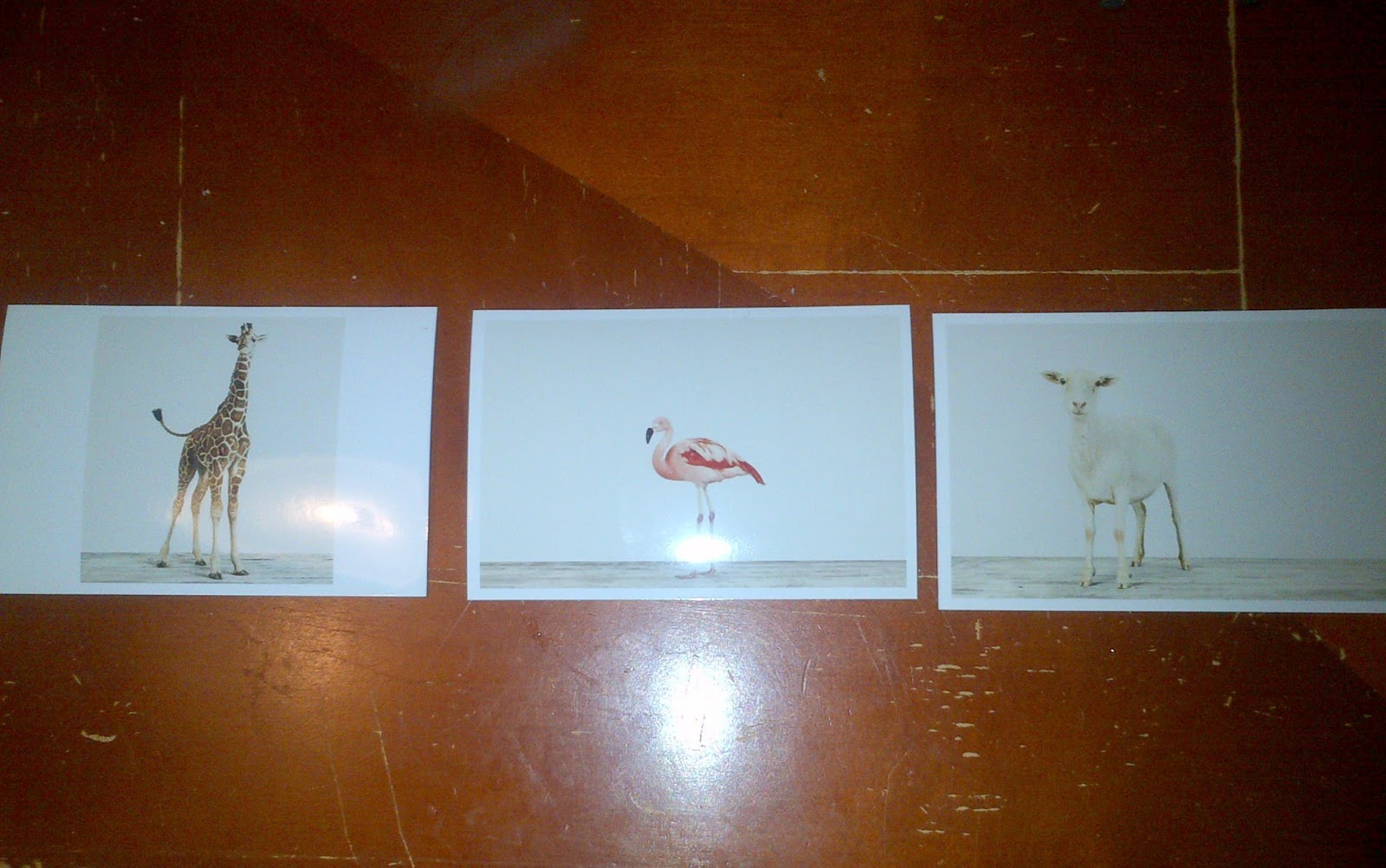 Three part lesson: Choose and stack three cards that are distinct from each other in some way. Place each card individually in front of the child and state the animal’s name. After all animals have been introduced, ask the child to point to each animal when prompted. (“Please point to the giraffe.”) Mix the cards up, and ask again. When you feel like the child has mastered this part, move on to asking the child to name the animals when you point to the cards. (“What’s this animal called?”)

Try to limit this activity to three cards at a time. When you feel like the child has mastered these cards, remove them and introduce three more. 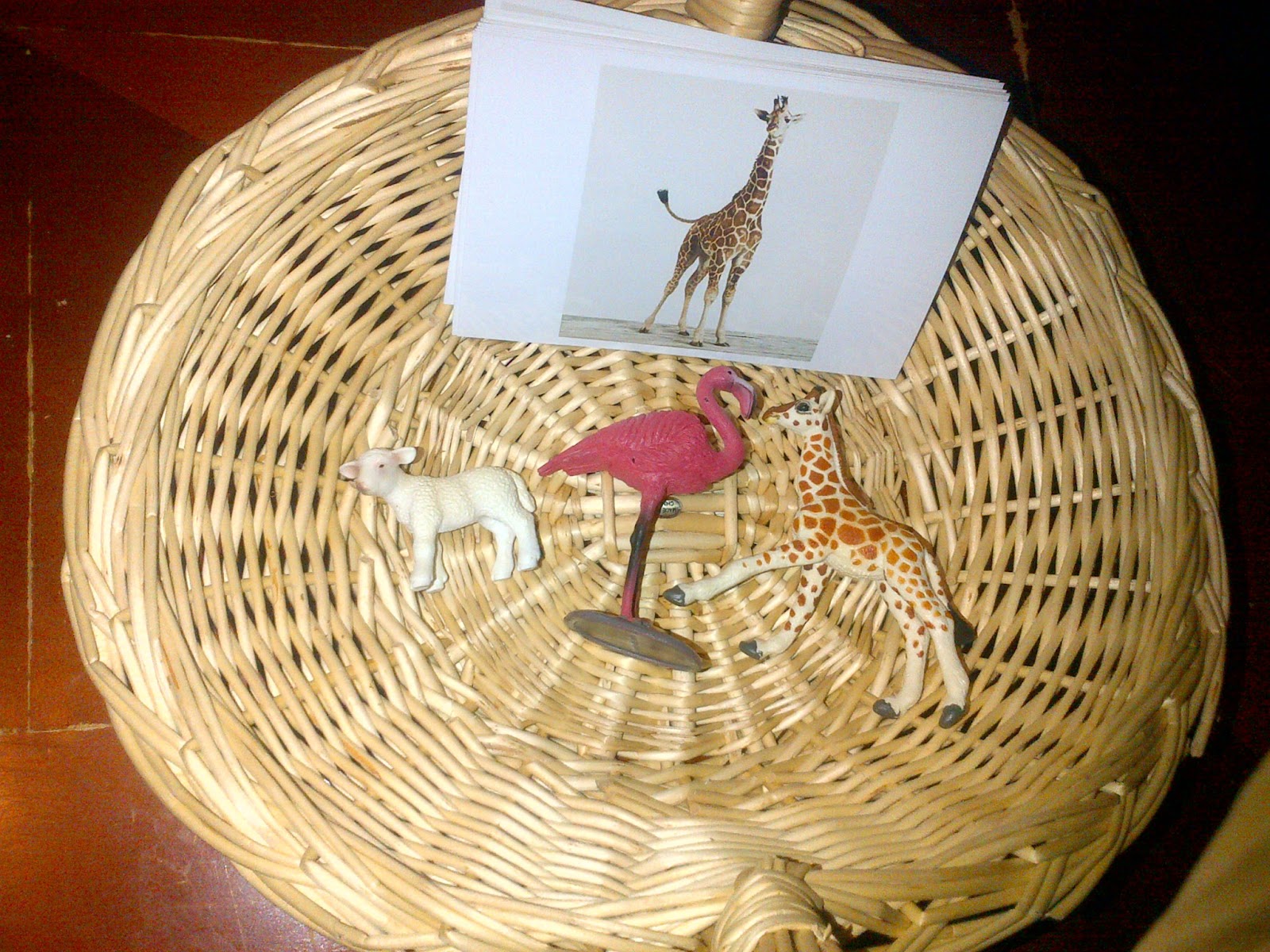 After this, the animal figures can be introduced. I prefer to do this as a tray (or basket) activity, without modelling. Only three cards are placed in the basket, along with their corresponding figures, to be matched. 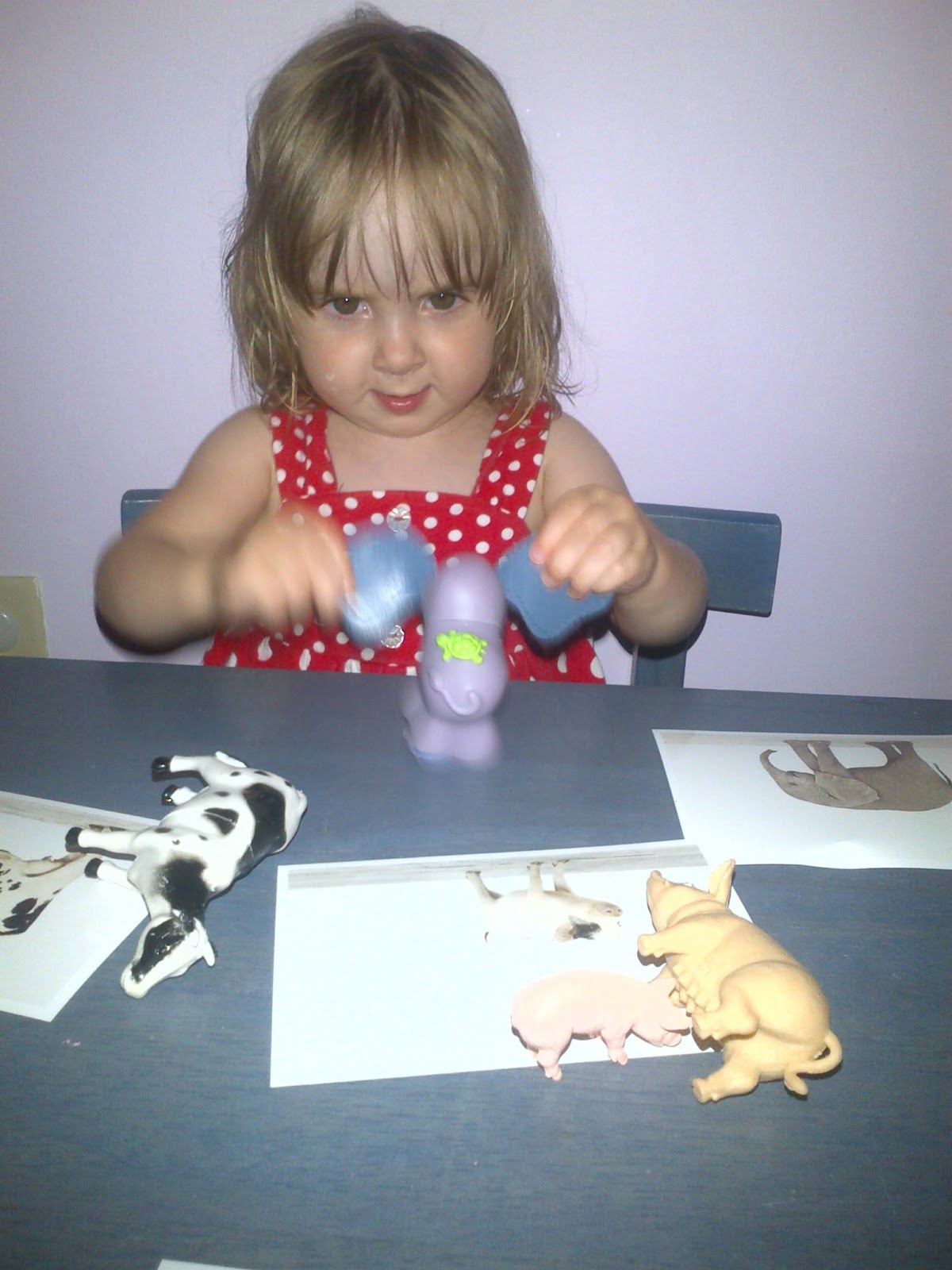 Eventually, after G had mastered having three cards at a time, I slowly built up the number of cards that she would experience at a given time until she had a full basket of animals and “deck” of cards. 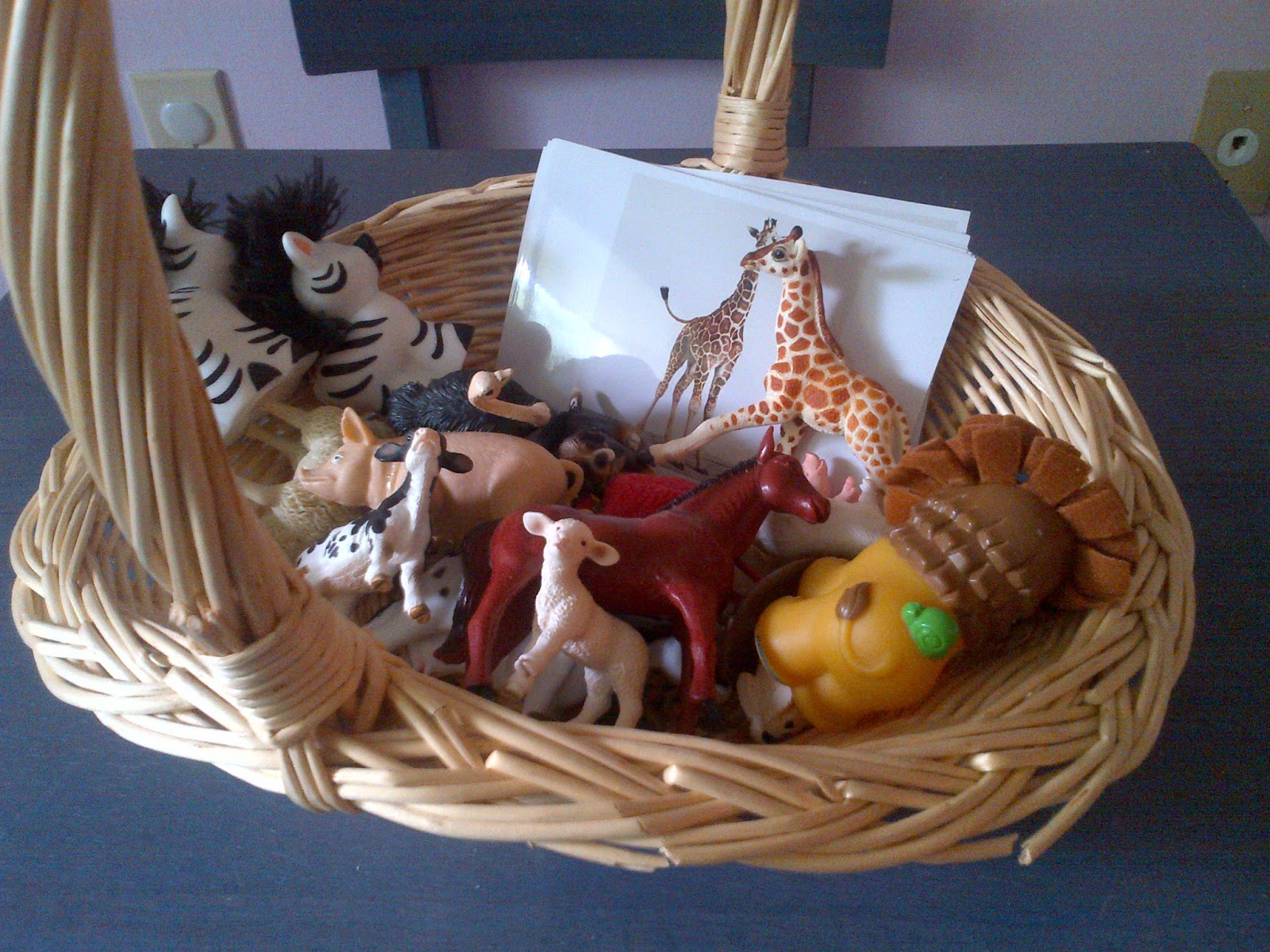 This is now a fixture on our shelves and G can build on the materials herself. She sometimes engages in the previous exercises, but often creates new ways of ordering the animals and cards. For example, she decided to match up mama and baby animals; we talked about how they had different names and how sometimes mamas don’t look like their babies. (An awesome “build on” topic for later, as G has a mixed heritage and also adopted cousins.) She also figured out that animal mamas give their babies milk just like human mamas (because of the teats and utters found on the anatomically-correct figures), and she allowed her piglet and calf to nurse. We have since organized them based on colour, genus, and environment.

These activities were done with my almost-two year old, but they can be started as early as 18months, depending on your own child’s individual readiness. At a later age, the photo cards can be turned into three-part cards, in addition to the activities described here.

Cost breakdown: $1.67 +
I printed 15 cards at Costco for a total of $2.24; had I been more organized, I could have jumped on their 4×6 sale price and paid $0.67. We already owned the Schleich/Melissa & Doug/Playskool animals, and they can get pricey, especially if purchased full-price. You can purchase these used or on sale from Chapters, Amazon, Scholar’s Choice, or Michael’s, or, make your own wooden, clay, or felt animals. A collection of about 10 homemade clay animals can be made for less than a dollar if you make your own clay; a few wool-felted animals can be made for the same price; or several dozen craft felt animals, if you purchase the individual craft-felt sheets on sale. Wooden animals can be purchased or made out of various soft woods.

What extension activities would you add?

« Rhythms of Our Day
A Colourful Summer »