Growing up in Beijing, I loved all of the wonderful Chinese festivals and holidays that I was lucky enough to celebrate. At the time, Westerners were still a novelty to many Chinese people, so we were allowed into festivals and events that are sometimes now closed to the public.

One of my favourite aspects of Chinese holidays is how entrenched they are with tradition and folk tales.

After the success of our Dragon Dance Craft, I wanted to share a traditional Chinese story with Ella about how hardworking little carp turn into dragons. 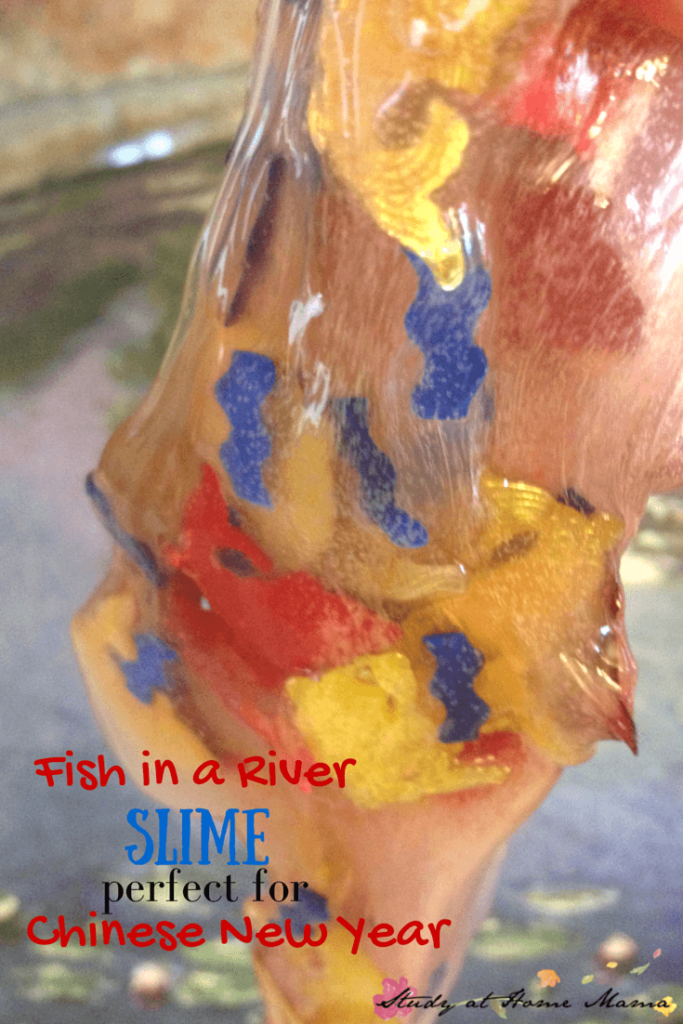 Of course, I wanted to give Ella a tactile sensory play experience to enjoy while I told her the story so I made this stretchy, gooey Chinese New Year slime with our go-to slime recipe from Fun at Home With Kids, and added in some fish sequins.

I told Ella a version of the story I heard when I was a little girl, but you could use the Dragon story from this book of Chinese Children’s Stories. 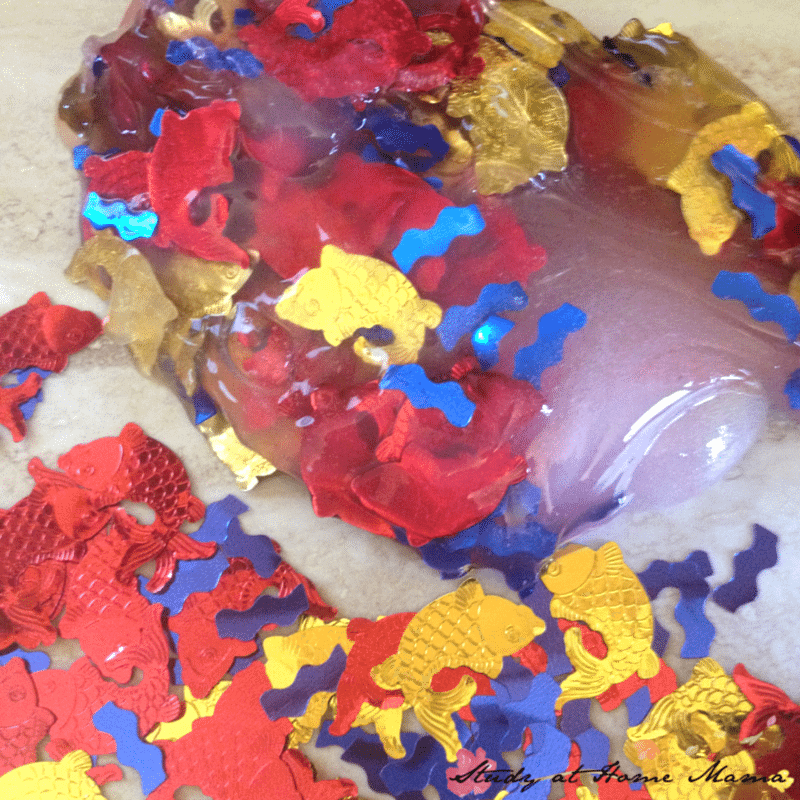 A long time ago, in ancient China, carp fish were kept in special imperial ponds at the palace of the Chinese Emperor. The fish were supposed to bring good luck to the Emperor, and only the Emperor could own the beautiful yellow carp.

A general in the Chinese Army did some good work for the Emperor, and as a token of the Emperor’s appreciation he gave him one of the special yellow carp from his imperial ponds. 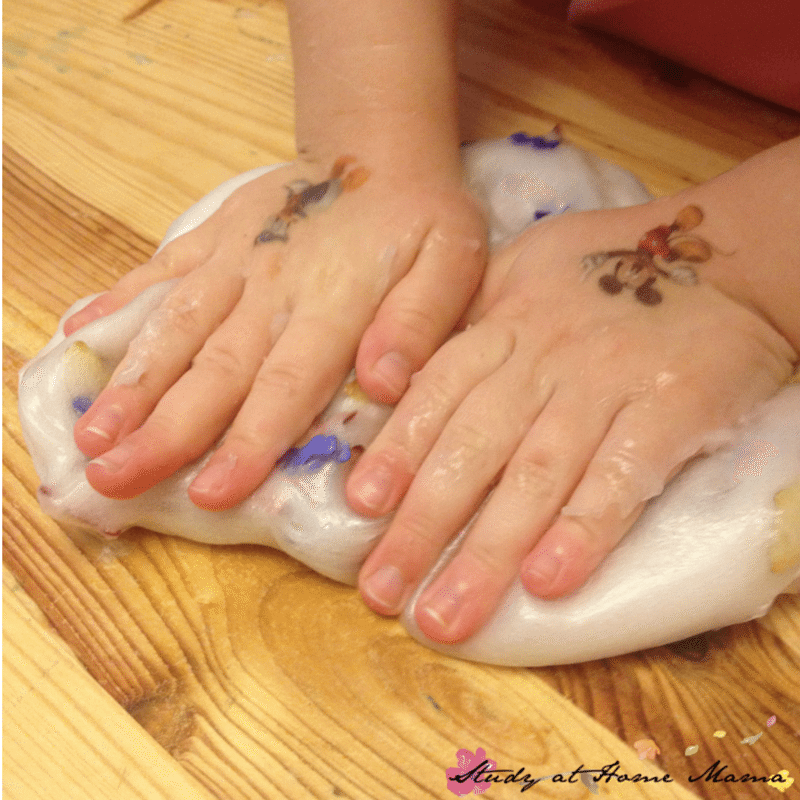 However, unlike the Emperor, the General did not have his own special ponds – he and his family ate the fish from the Great Yellow River which belonged to all of the People of China.

The General knew that he had two choices: he could put the Yellow Carp in the Yellow River, or he could eat it that day.

The General knew that if he ate the fish, he could become lucky, but if he put the fish in the Yellow River, maybe luck could come to the People of China. 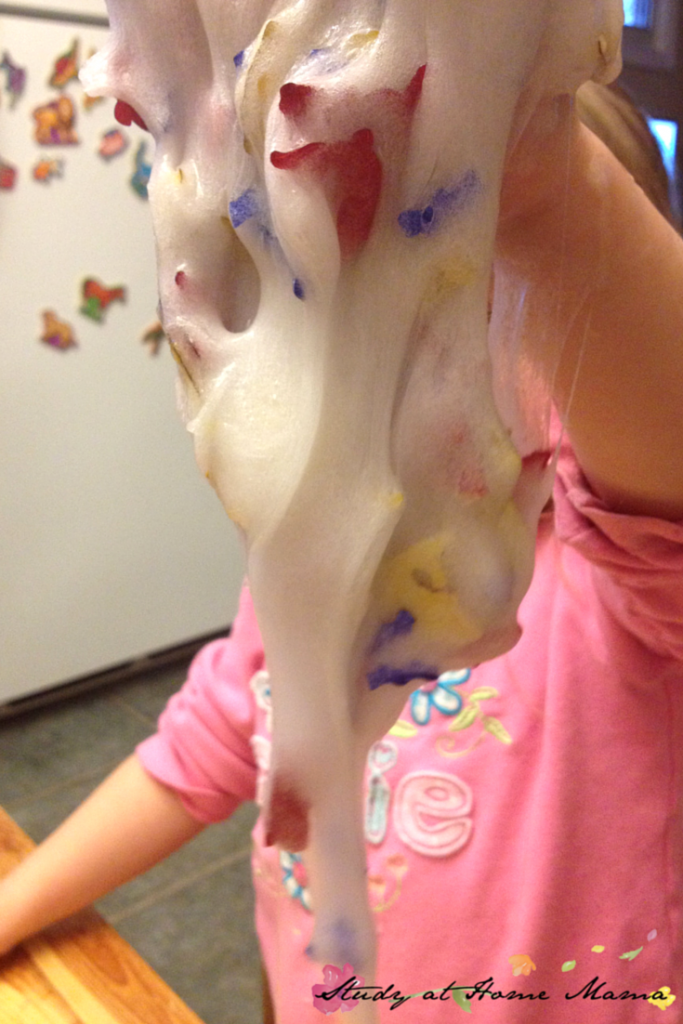 The Yellow Carp never stopped until it reached the waterfalls of the Yellow River. 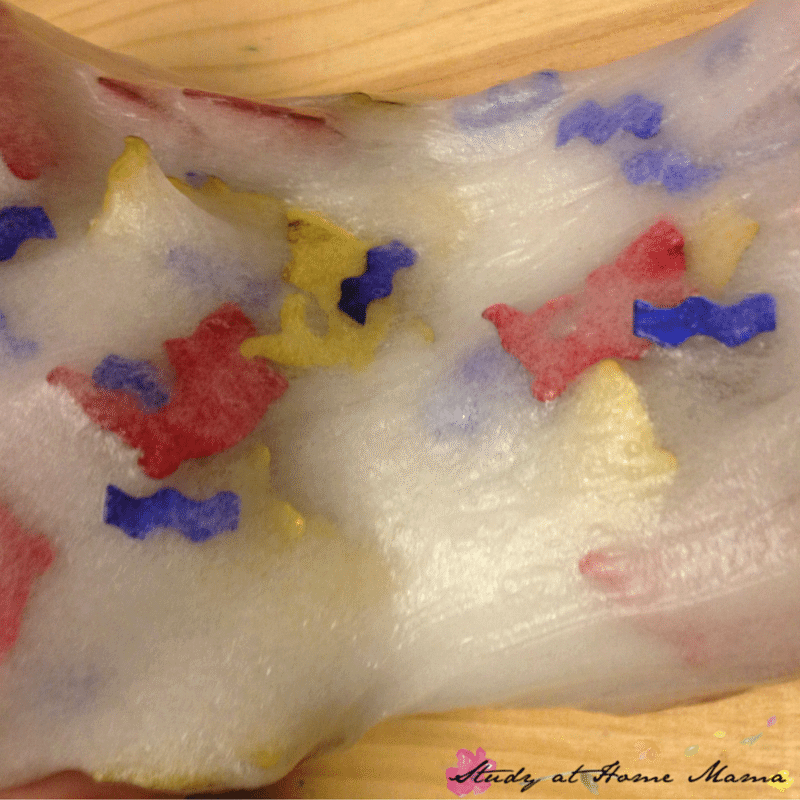 The Yellow Carp had worked so hard to get to the waterfalls, he didn’t know what to do! No fish had ever passed through the waterfalls of the Yellow River, the water was too strong and heavy for them to swim against.

But, the Yellow Carp had worked too hard and swam too far to give up now. He gathered up his courage and pushed jumped over the waterfalls!

And, HE TURNED INTO A MAGNIFICENT DRAGON! 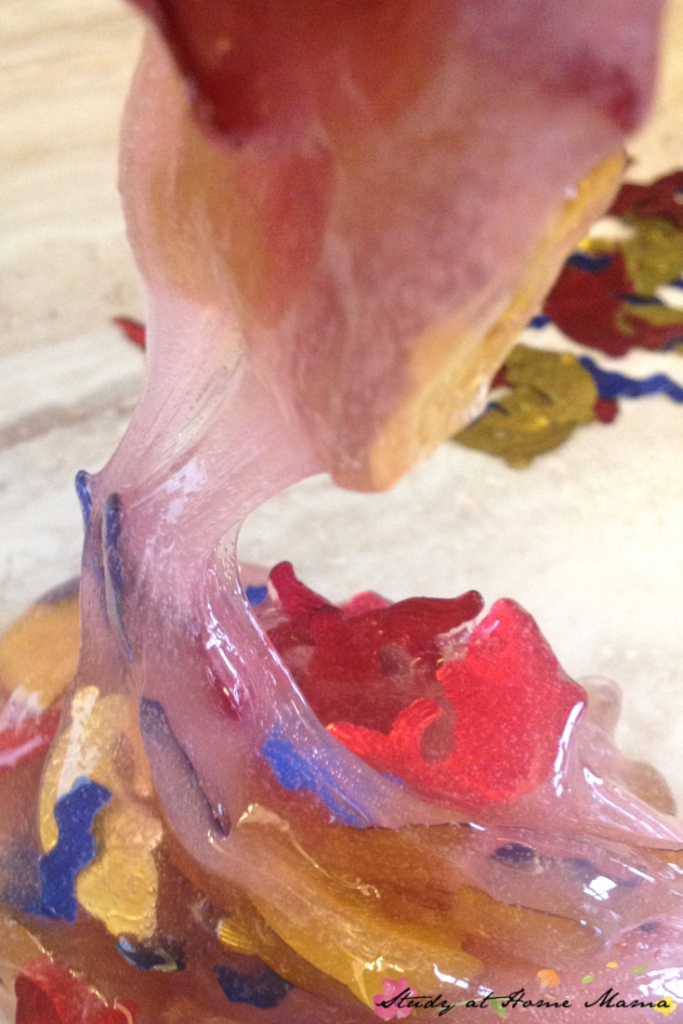 Chinese New Year is different than Western New Year, in that it lasts for two weeks (in 2015 that’s from Feb 19th until March 4) so even if you miss the first day, you still have plenty of time to acknowledge and learn about Chinese New Year!

To make this slime, mix:

Knead the slime together for at least a minute after everything is incorporated to bring it to the right consistency.

If you’ve never played with slime before, don’t worry about a sticky disaster! If it’s made properly, it will be stretchy and gooey but not sticky. Fun at Home With Kids has a great troubleshooting guide if yours isn’t looking right.

Be sure to pin this Chinese New Year Activity for Kids idea to remember it for next year!

Slime can require a bit of experimentation and patience, especially if you’re still new to it. If you run into any slime fails, check out this troubleshooting post to help fix your slime.

If you’re looking for the ultimate slime guide – you need to check out our Slime Book with over 40 amazing, unique slimes:

(Read more about The Slime Book and what it contains here.)