Recently, we made an American Flag Popsicle stick craft as a guest post over on Kindergarten Connection, and I thought we should definitely make a Canadian Flag Popsicle Stick Craft to make a set! (We are Canadian, after all – did you know that?)

With Canada Day coming up, it’s a great reminder to touch base with your kids and find out how much they really know about Canada. For us living so close to the border, it’s been interesting trying to teach Ella about the differences between American & Canadian culture, and what it means to be a Canadian citizen and a world citizen.

This popsicle stick craft is a great way for kids to develop a hands-on knowledge about their national flag and can be adapted to make a flag for any country. You could even make it a mission to create a popsicle stick flag for each country of the world! 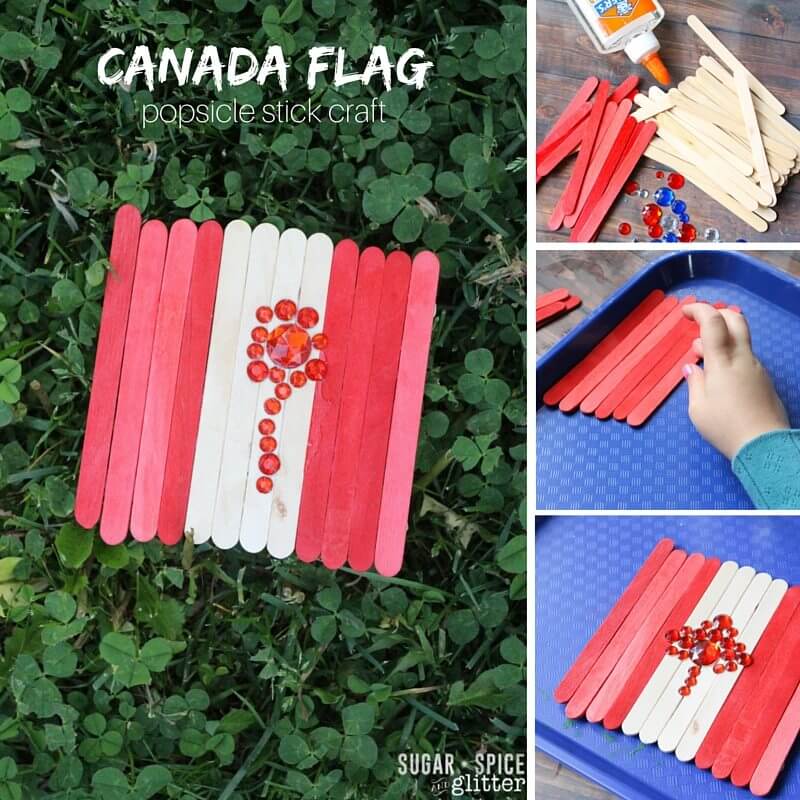 How to Make a Canadian Flag Popsicle Stick Craft

You can also substitute a foam or wooden maple leaf cut-out for the red craft gems.

Something our American readers might find interesting is that often where you see a Canadian flag, you will also see a Union Jack or a provincial flag. This is because the Union Jack is still an official flag of Canada and we are still technically part of the British Commonwealth (by name only, really). 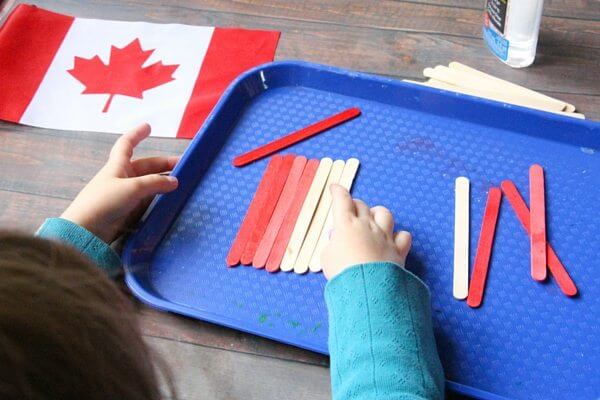 Ella first started by making the base of the flag – creating 3 equal sections of popsicle sticks. 4 red popsicle sticks, 4 plain, and then another 4 red.

Across the back, she glued two plain popsicle sticks to secure the flag.

(Add a third, vertical popsicle stick to the side of the flag for an optional “flag pole.”)

Let the glue dry before moving onto the next stage of the craft. 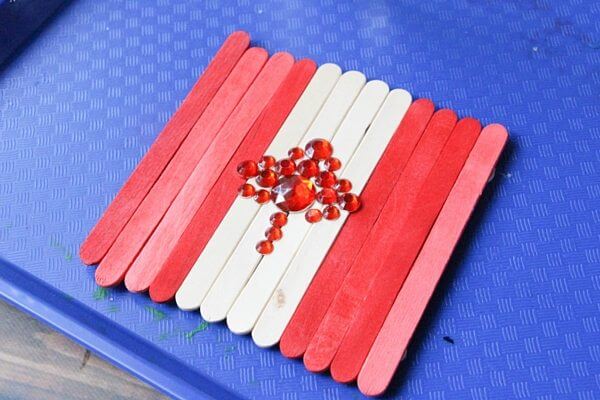 Arrange your gems until you achieve a pattern you like – Ella spent a lot of time arranging the gems but then when it came to securing them with glue she wasn’t able to recreate the exact pattern, which was a bit frustrating for her but I think it still came out beautifully.

As a special surprise, I attached a strong magnet to the back of Ella’s flags. I love how they look side by side on our fridge! 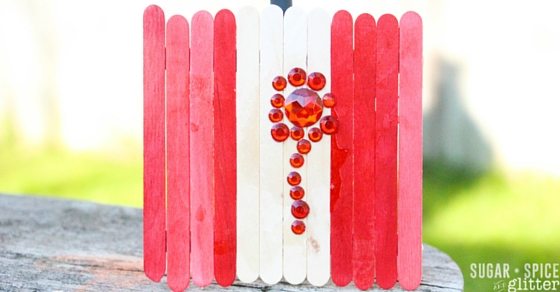 What flags would you try to make out of popsicle sticks?

Be sure to check out some of our other kids’ craft ideas, like our Madeline peg doll craft or a rainbow paper plate loom. 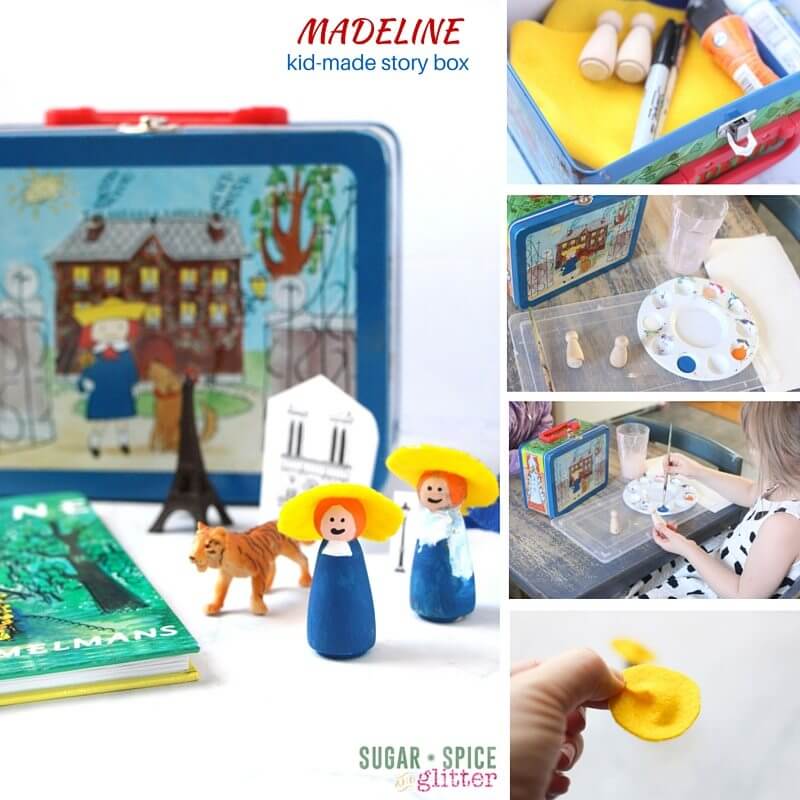 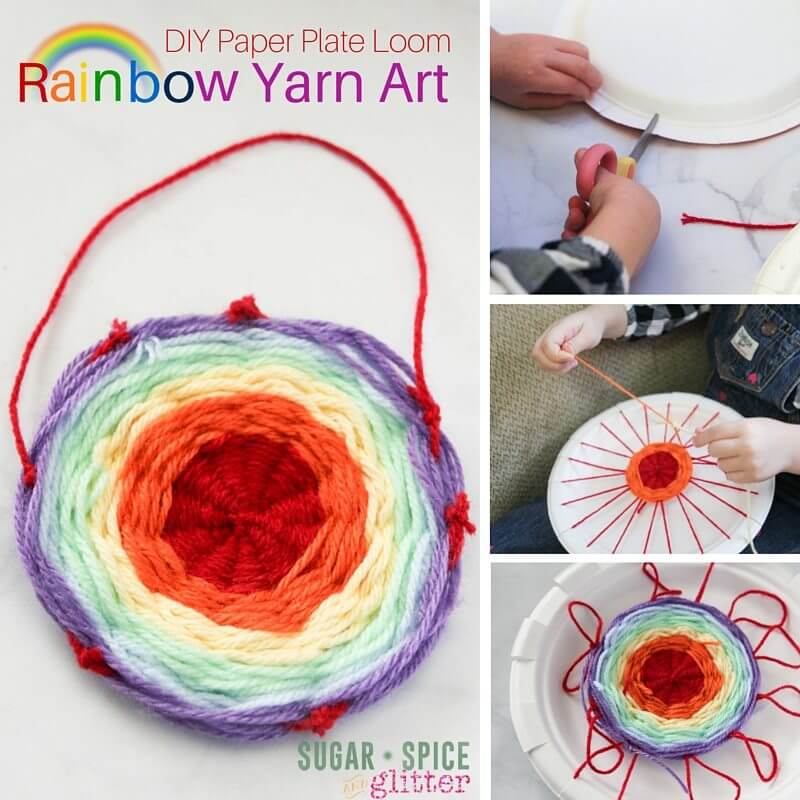