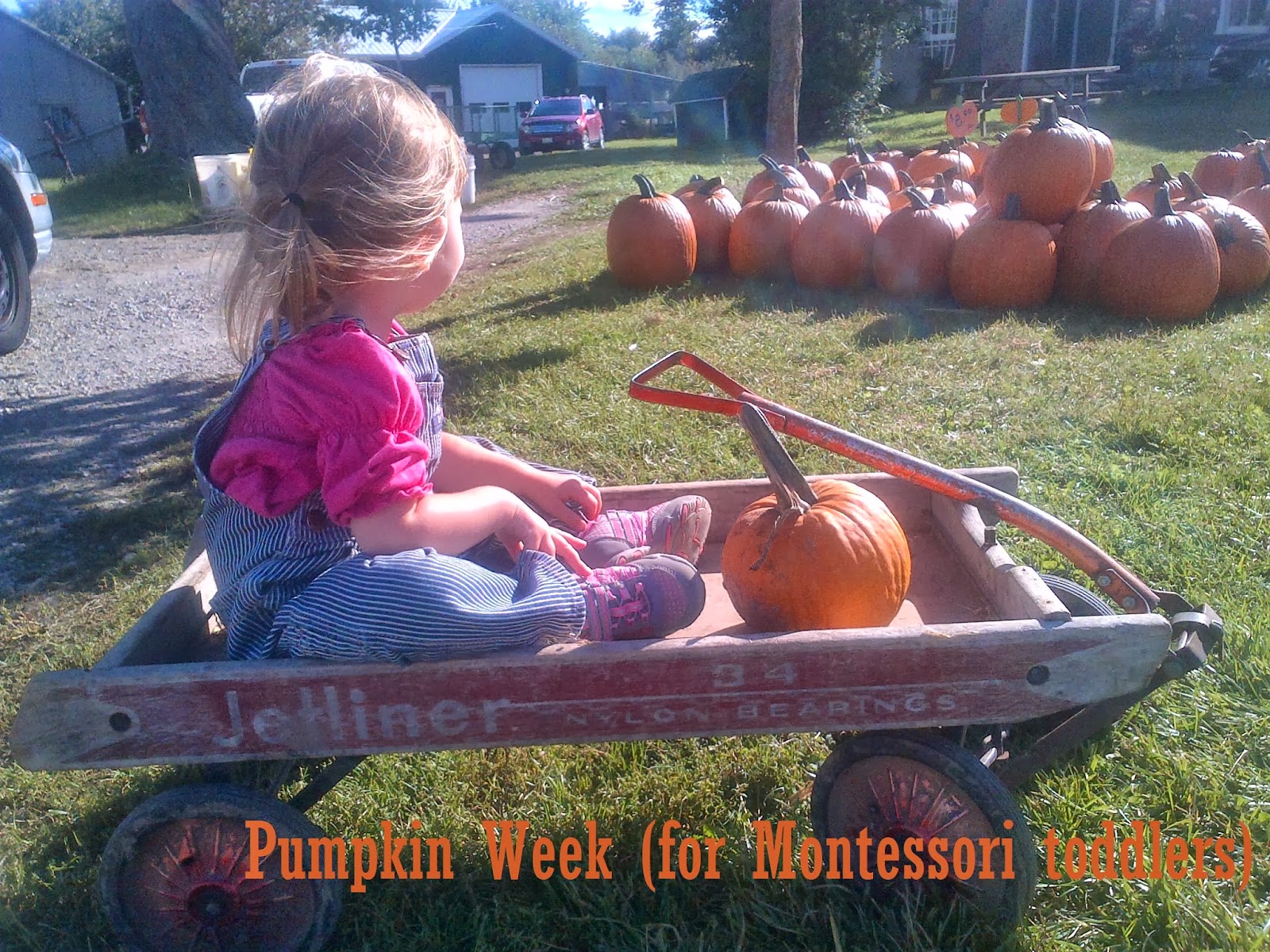 I actually wasn’t planning on having Pumpkin Week until next week, but I really try to follow Ella’s interests and shape our unit studies to suit what she is interested in. I intended to have this week be about Dolls and have that lead into a larger unit study about learning about our Bodies (upcoming), and had set up a “Doll Bath” invitation, but Ella requested that we instead give her just-purchased pumpkin a bath instead!

This was a fabulous Practical Life engagement, in that Ella had to ensure that she had all of the right tools, she was able to experiment with different tools for cleaning her pumpkin, and she had to follow a proper sequence to carry out the task: 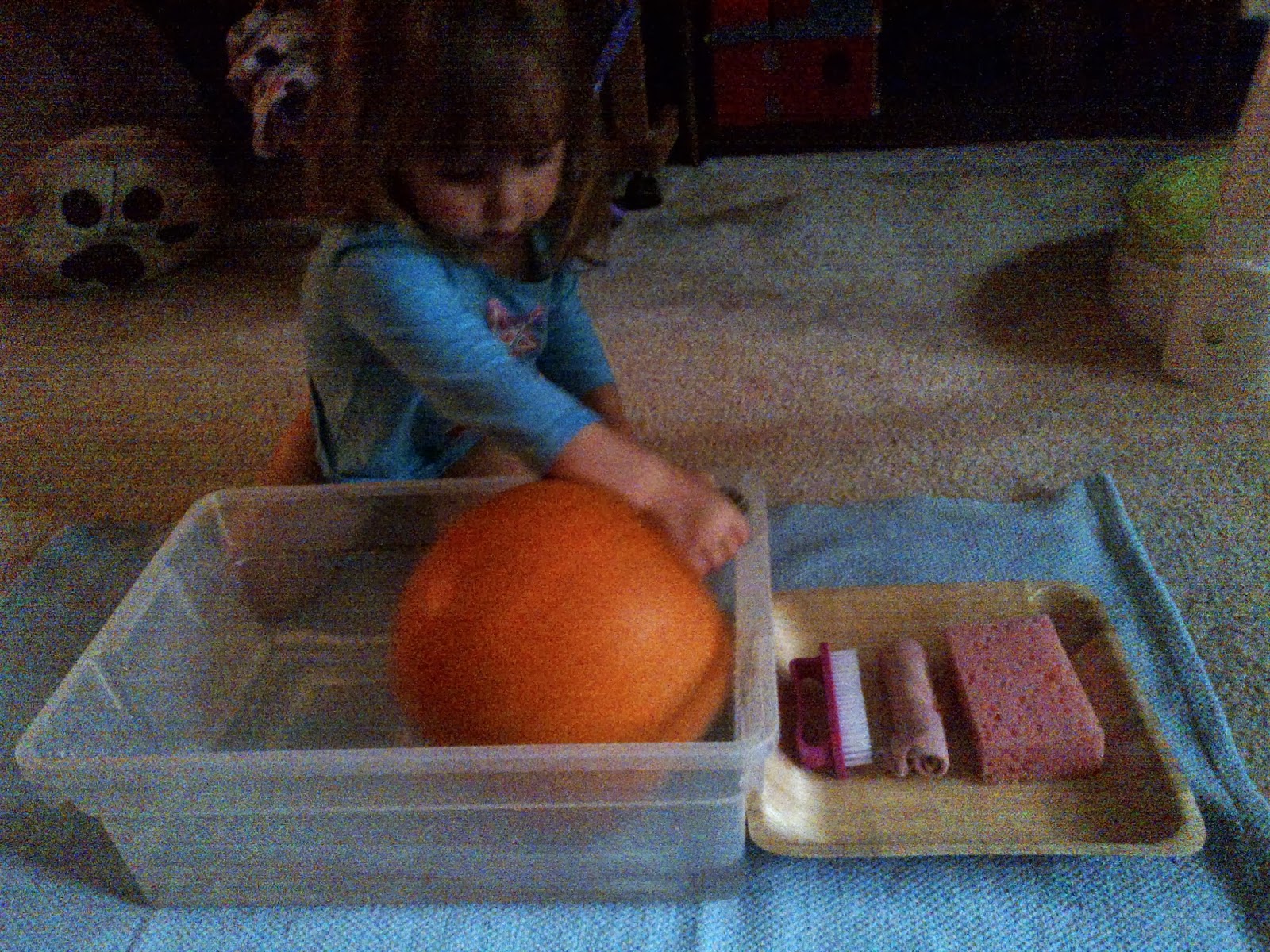 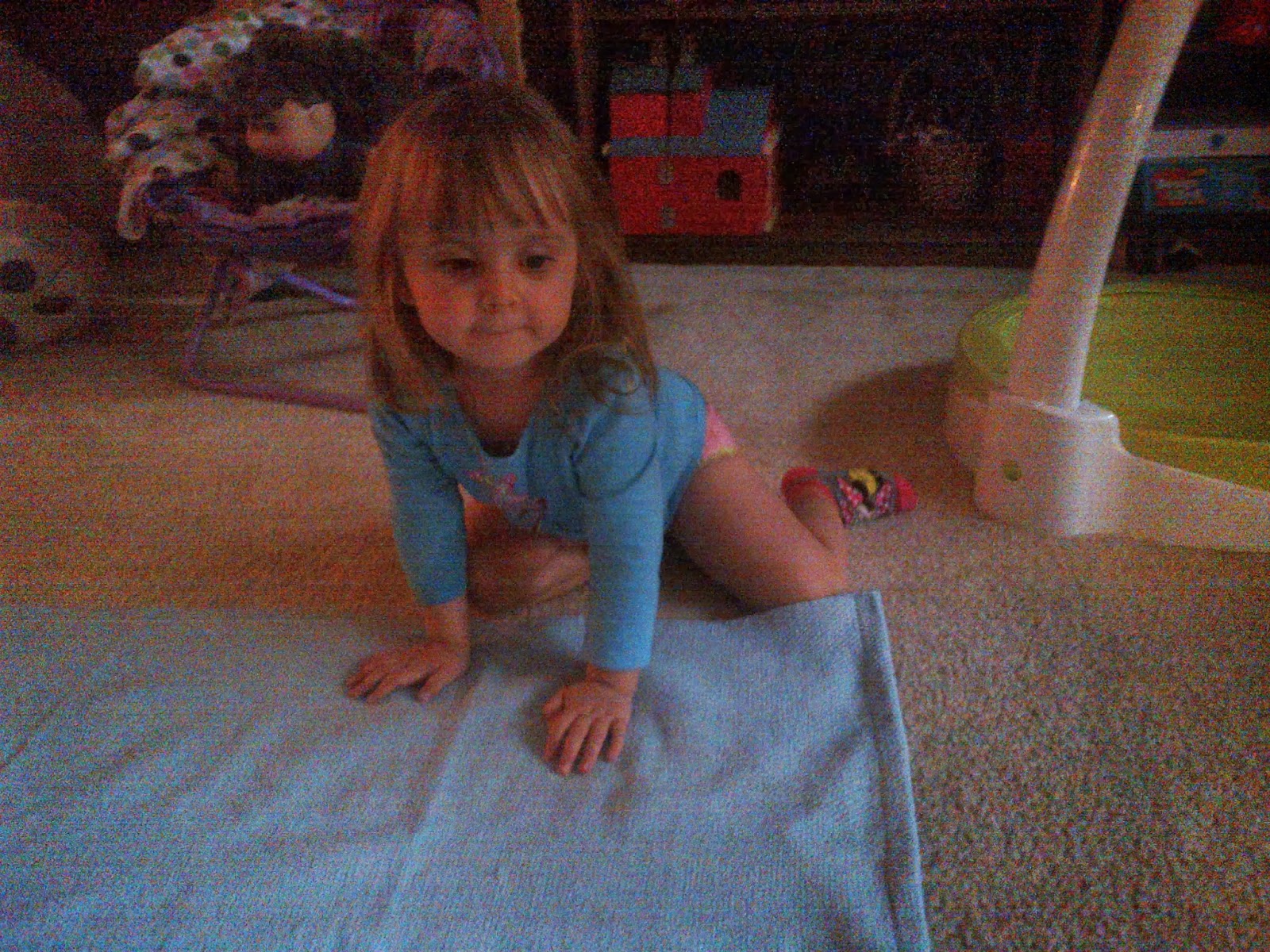 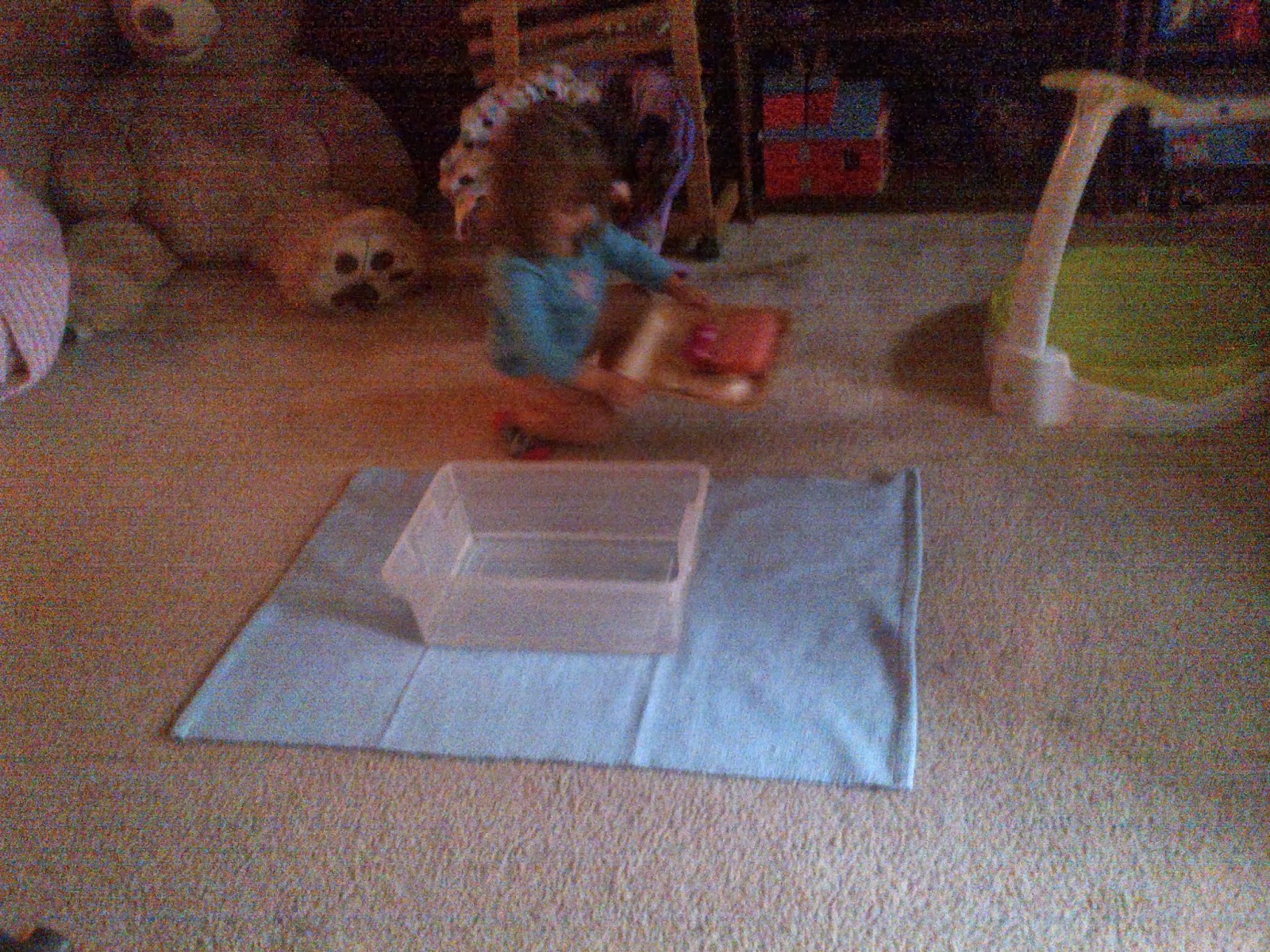 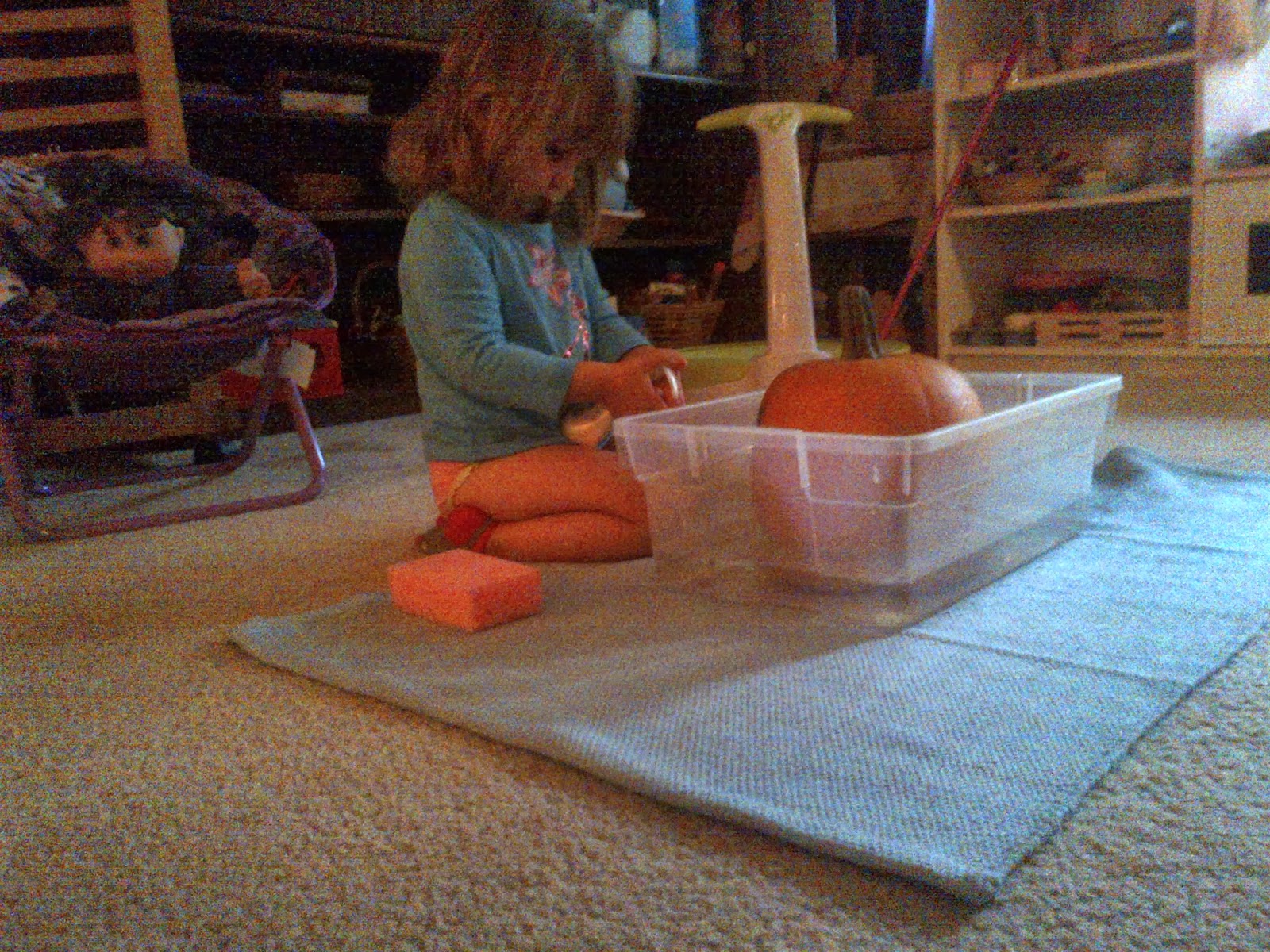 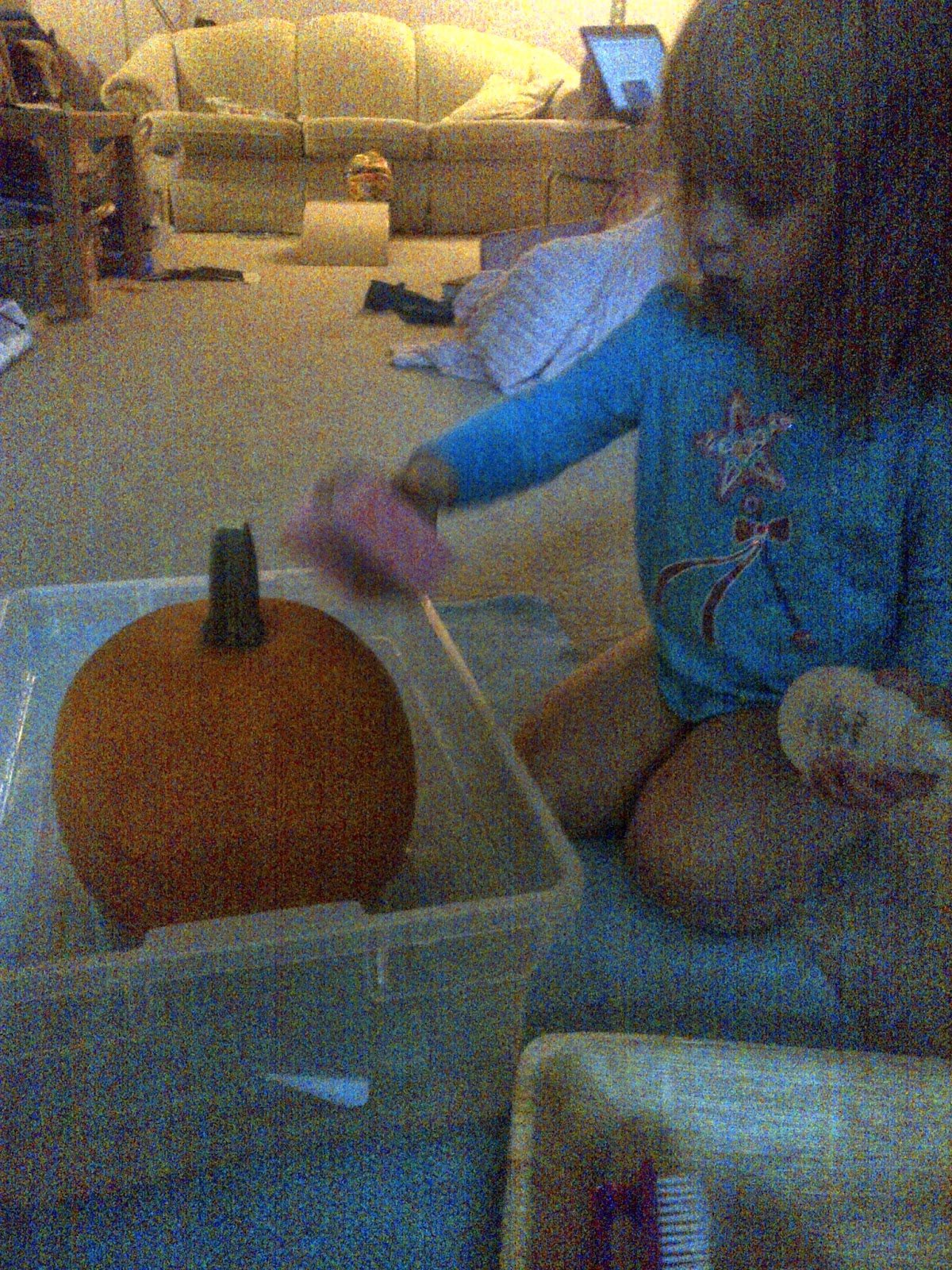 Our pumpkin washing activity also reinforced the concept that some fruits and vegetables come from the ground, and with an older child this would be a great opportunity to introduce classification of foods. (PS – did you know that pumpkins are a fruit?) Biology, nature study.

While Ella was cleaning up her activity, I was gathering some decorative pumpkins that I intended to place on her nature table, and she decided to clean these, too! 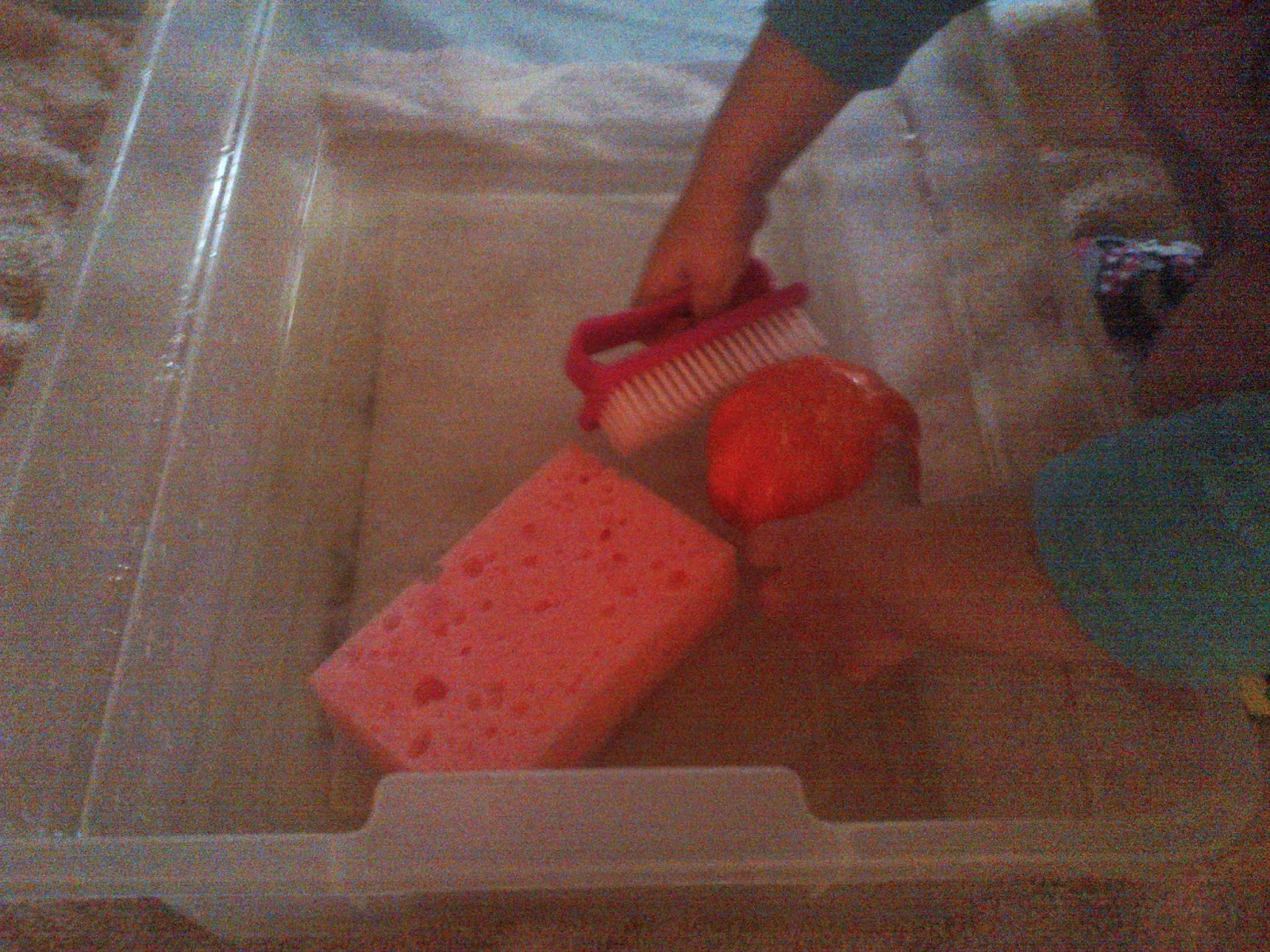 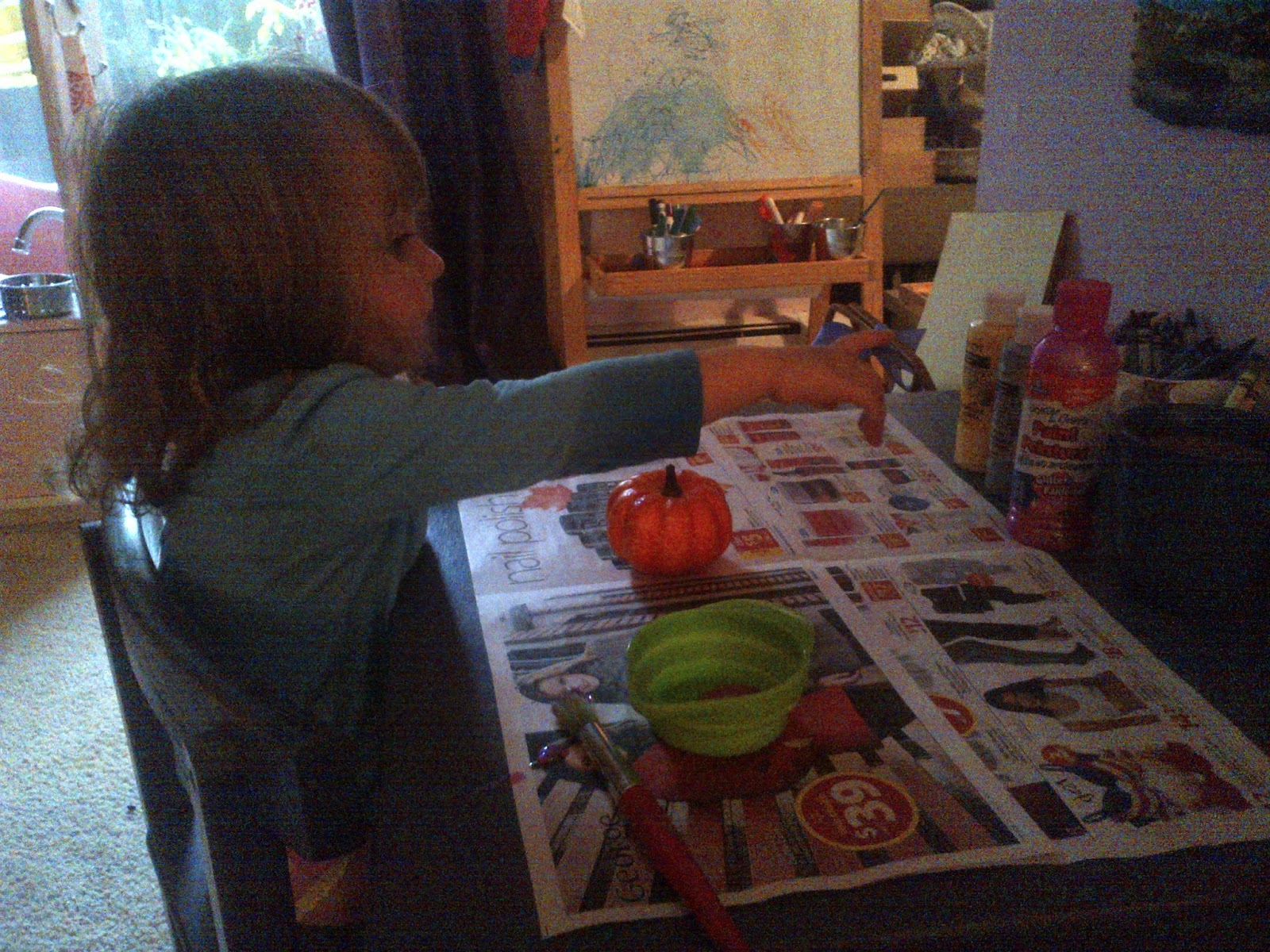 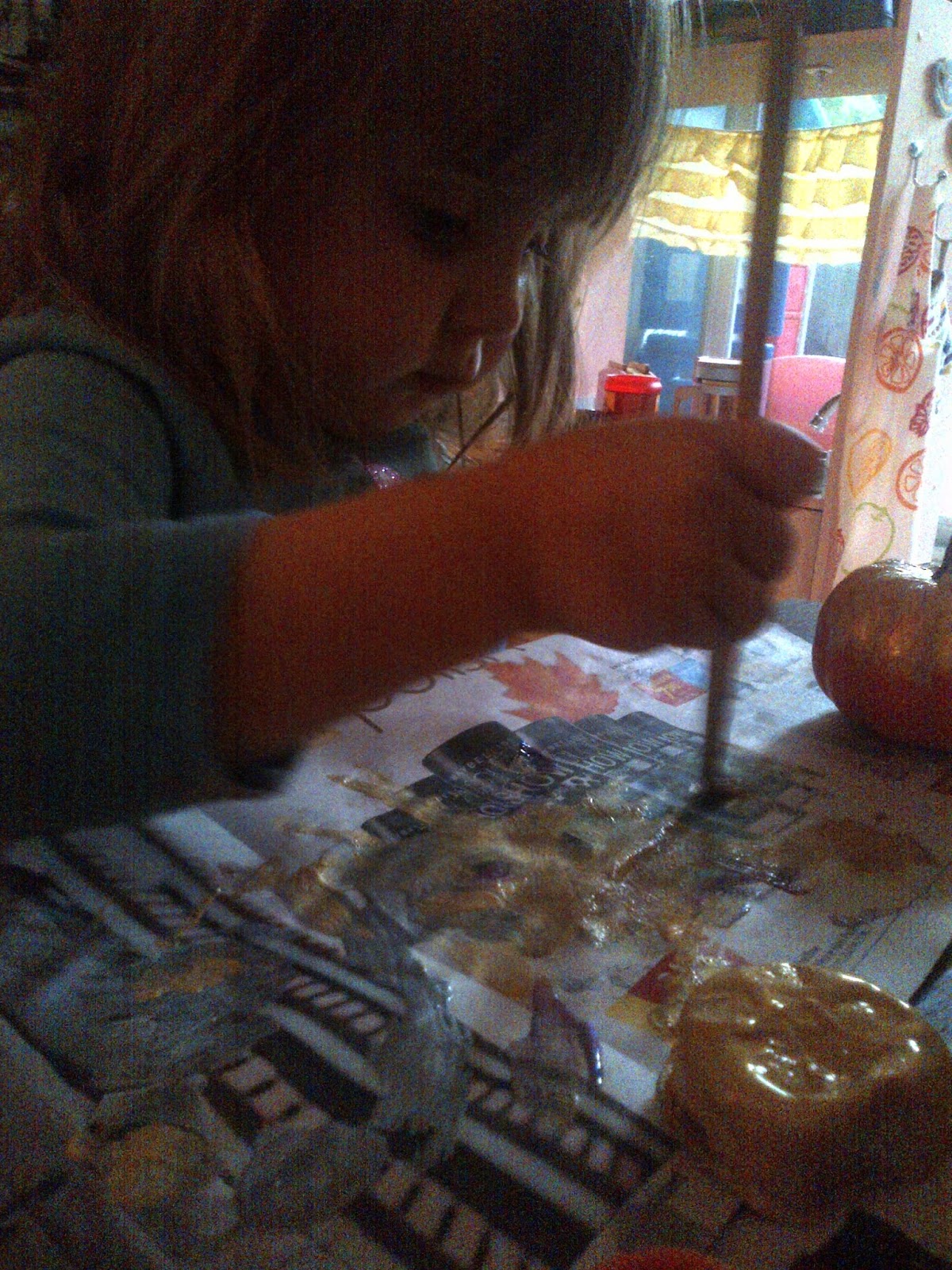 We then decided to paint them before adding them to the table using a mix of “mama” and “baby” paints, making it an extra special project. Ella also had to exercise her fine motor and observation skills, as well as self-control in her application of the glitter. Art, fine motor control.

A mama-friend arranged a playdate at a child-oriented pumpkin patch (complete with farm animals, corn maze, etc) and it was a fabulous outing. If you live near Mount Brydges, Ontario, I highly recommend Kusterman’s Berry Farm for a sweet fall daytrip. We went on a long weekend, and even though the parking lot was completely full by the end of the trip, the farm and attractions did not get crowded or busy. It was not over-stimulating, and provided plenty of open-space to run, as well as various activity options that were in plain sight of each other, in case you had children of different interests wanting to do different activities at the same time. When we walked in I saw face-painters and pony rides set up very close to the entrance and immediately started looking for the price for these additional attractions — only to find out that they were included in the price of admission. ($10 for me and under-3s are free.) That totally rocked and won me over right away! We were able to zip-line, ride pedal-carts, shoot a corn cannon, visit with animals, dig in a corn sensory bin, climb play equipment, sit on a pony (Ella was not ready for a full ride), navigate a corn maze, and ride a tractor-pulled wagon, at no additional cost! The snack station (with S’more ice cream, hello) was located in the gift shop building (along with apples, toys, etc), which I thought was considerate, allowing parents to opt out and not encounter the begging that can accompany the sight of tempting food.

Kusterman’s also had the option to pick-your-own pumpkin from their pumpkin patch, and Ella selected one… and then I made the “decision” (RE: possible mistake) to take her to a second, retail-only pumpkin patch just up the road from Kusterman’s, as we were heading home… which resulted in the purchase of fifteen (yes, 15) additional pumpkins, gourds, and squashes to bring home. 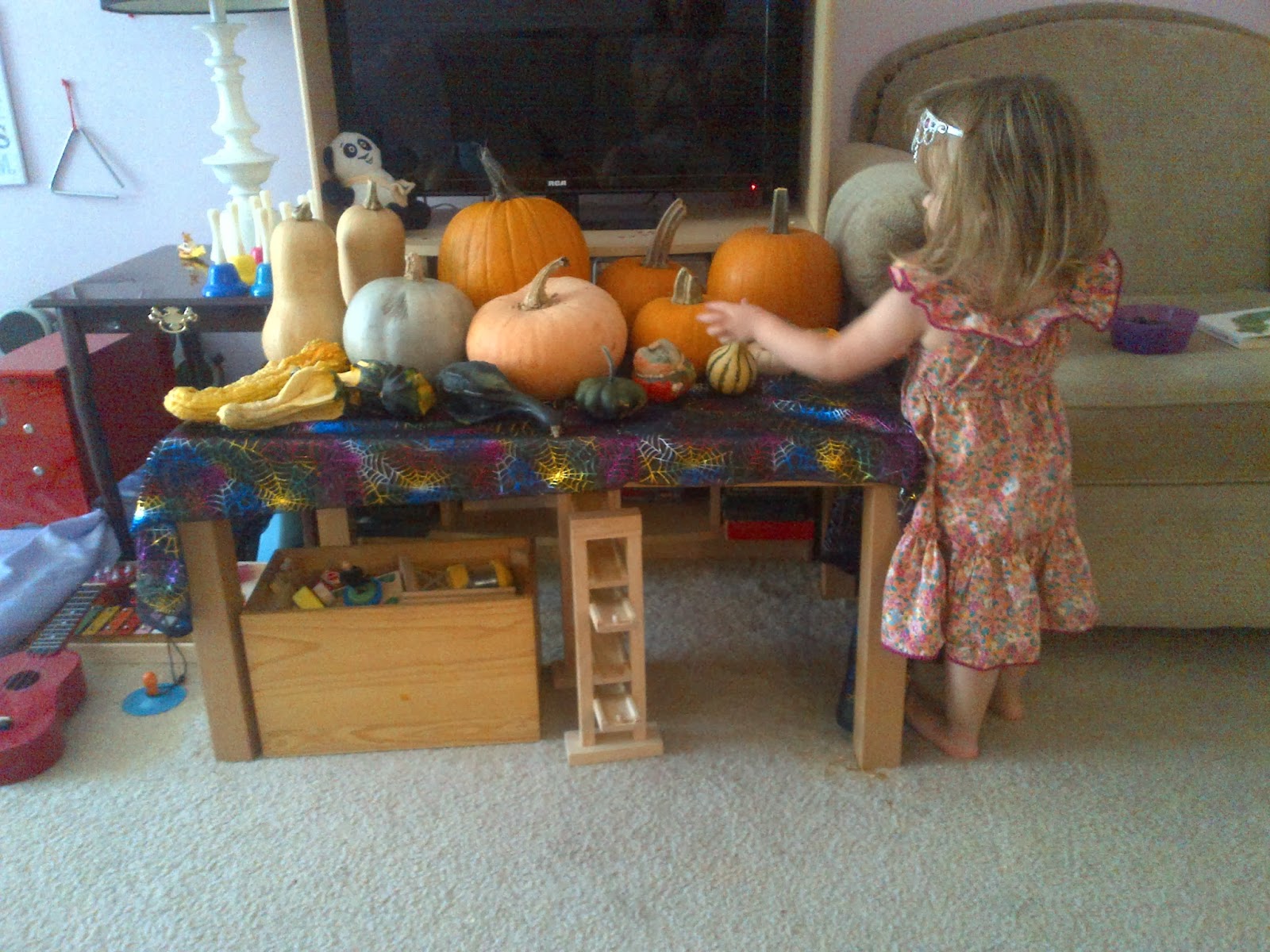 We washed these pumpkins, gourds, and squashes using a similar invitation to the one described above, only now I encouraged Ella to select pumpkins to wash in order of least amount of dirt, so that the “cleanest” squashes were placed into the water first. I also set up a second bin for myself to work at (because of the sheer number of squashes), ensuring that I selected harder to clean squashes for myself so that we were working at the same speed. I placed a Hallowe’en-inspired bolt of fabric over the top of Ella’s train table and allowed her to set up her pumpkin display. This instills pride in her environment and allows her to creatively conceive of practical arranging, much like traditional Montessori flower arranging would allow; the purpose is to develop an “aesthetic sense” and discriminatory eye regarding one’s own work. This activity could be done with even a handful of gourds. Children can also develop vocabulary skills through aesthetic arranging, especially if you engage them about why they arranged the materials in the way they choose. Ella later told me that she was “matching” and that “the tall ones had to go in the back.” Meanwhile, as Ella was absorbed in her arranging, I researched to find out which varieties we had purchased, and what we could do with them! Classification, care of environment, aesthetic sense, language development. 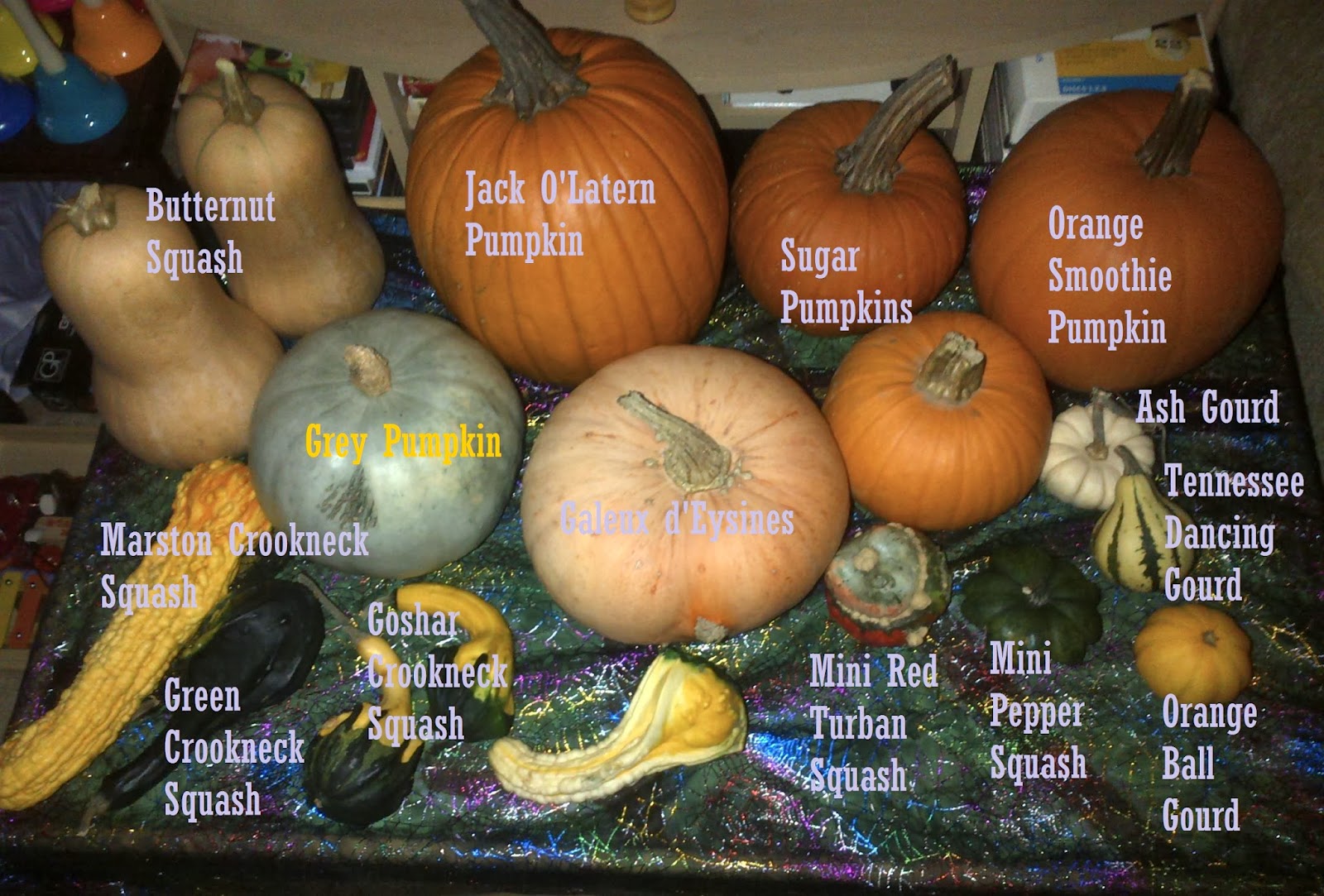 I didn’t realize at the time how rare some of these varieties are and it reinforces to me why it is so important to shop local and support farmers who value variety and heirloom produce. We paid $9 for all but the three top-rightmost pumpkins.
With an older child, I would make labels, or perhaps classification cards, to suit or include the varieties that we purchased, but for Ella we just worked on first understanding which were pumpkins, squashes, or gourds, and we learned the names of the pumpkin varieties. We used different adjectives to describe the pumpkins and their differences: bumpy, smooth, blue-gray, orange, peach-coloured, ribbed, flat, short, tall, round, etc. Biology, classification, language development.
We were able to do several different activities with these real pumpkins, but to avoid making this too long of a post, I’ll share those activities in Pumpkin Week, Part Two.
For those who are not able to get their hands on real pumpkins, there were several other pumpkin activities that we enjoyed.

I purchased a small set of plastic pumpkin “scatter” from Target and so far we have used them in three different activities, before adding them to our “loose parts” play on our Nature Table. 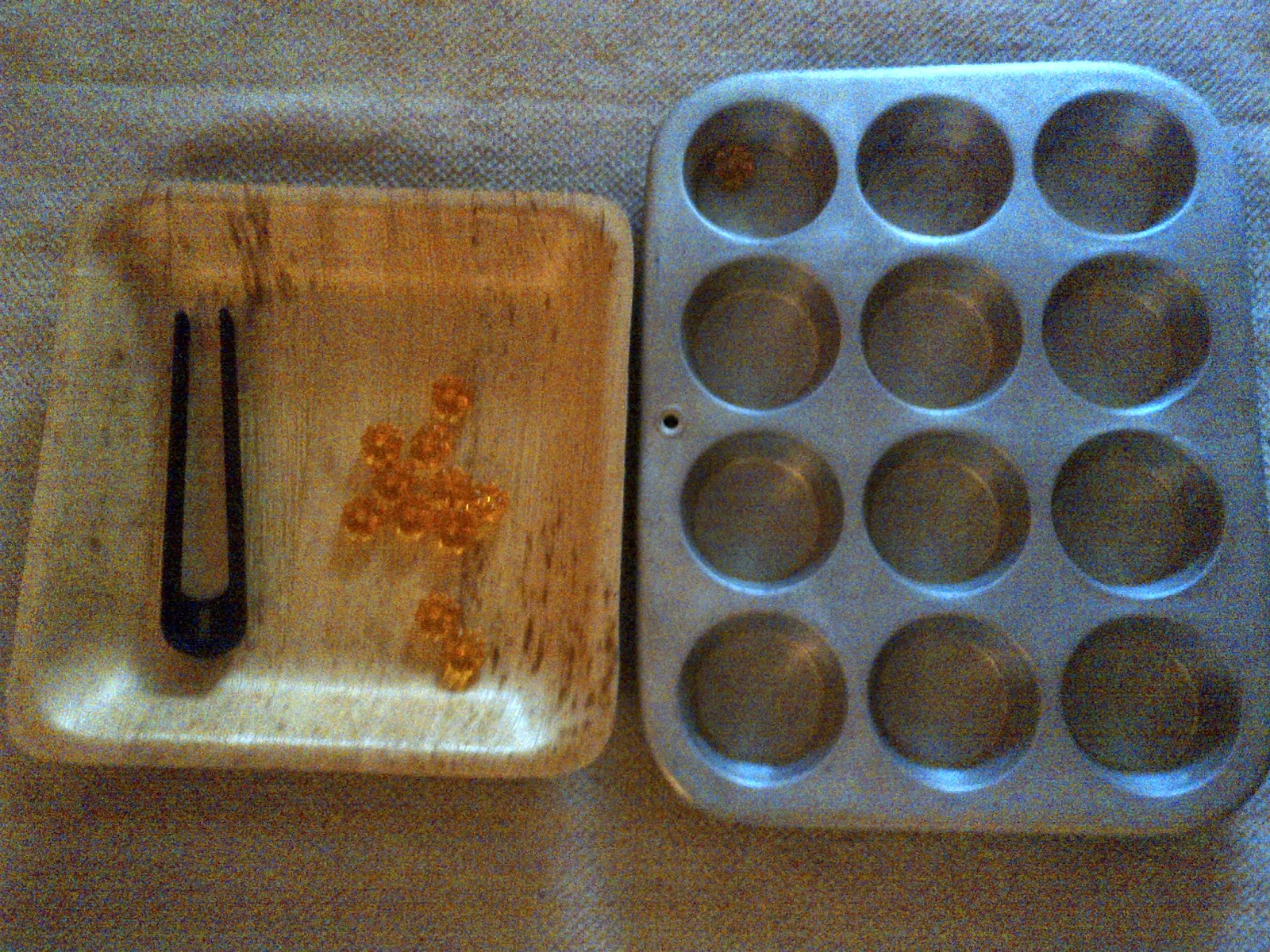 Our first task was to transfer the pumpkins from a bamboo tray into each indentation on a muffin tin using Ikea children’s kitchen tongs. I like that a muffin tin provides control of error (make sure to count out only 12 pumpkins) but it less narrow than an ice tray for removing the pumpkin to “reverse” the work and extend the activity. Practical life, counting. 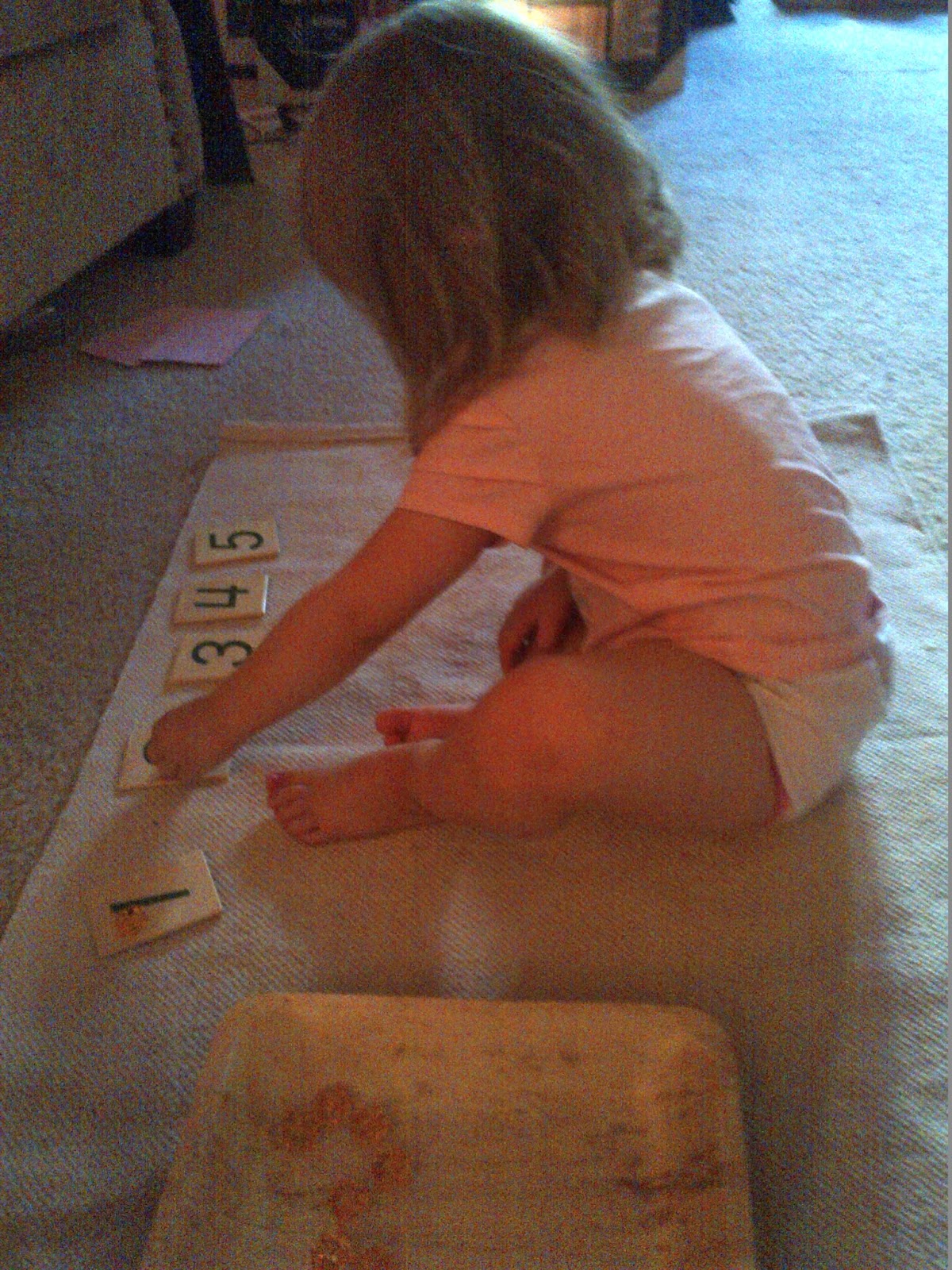 Next, we used the pumpkins as counters with our Number Cards. This is really early to be initiating this work, but Ella observed it somewhere and has repeatedly initiated this activity despite my hesitance, so I’d rather ensure that she is actually learning proper quantities than be stubborn and refuse to work with her on counting because I think its too early.
However, I’m going to share how Ella is counting, in case anyone else has a child doing it this way: she starts by laying one pumpkin counter on each card, and then, skipping “one”, lays a second pumpkin counter on each card starting at two, then skips two, and lays a third pumpkin counter on each card starting at three, and so forth. I had to really stop and watch her process to realize what she was doing and how the math was working in her mind. This actually is a form of advanced division — she has 15 counters to be divided into 5 groups of increasing amounts — but I got the strong feeling that she was “skipping” a step that may undermine her mathematical foundation later. After consulting with a Montessori-trained friend who has seen this (often!) I’ve realized that Ella might be doing this because its quicker than counting, but also to possibly “skip” counting out three and four and rather just figure them out by sequencing. We’re going to go back and re-affirm her understanding of three and four objects before returning to counting. If I know that she has a strong foundational understanding of her numbers and she continues to count this way, I will let her, but I want to ensure that we’re building a solid foundation of math understanding. Math, counting, division?

Next, we explored two different “pumpkin patch” sensory bins. The first… I attempted to “help” my daughter overcome her aversion to dirty/messy materials by making some “mud” (water, flour, and black food dye) and immersing the plastic pumpkins in it for her to fish out and place in a second, smaller container. Ella simply took the larger container and poured it into the smaller one. The small amount of “mud” that touched her skin needed to be immediately washed off. Biology, sensory, care of self. 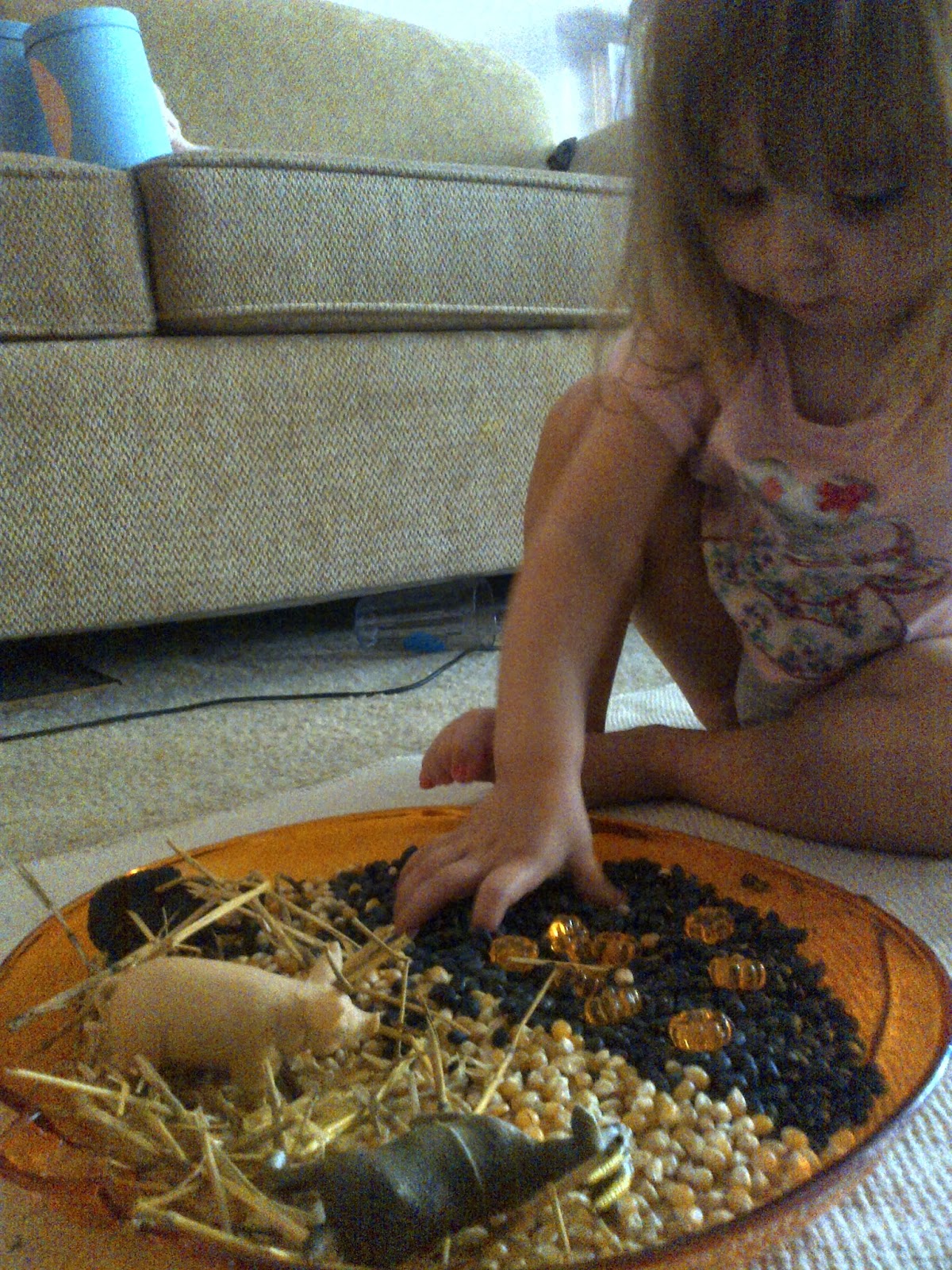 The next “pumpkin patch” was kind of a recreation of the actual pumpkin patch that we had just visited. If I had time to get a print of Ella and her buddy at the patch, that would have been an awesome addition or side display. I put all of the items in a pumpkin-shaped tray: black beans for the “mud and dirt,” popcorn kernals to represent the corn maze and corn sensory bin, corn meal and hay for the bales that we climbed on, the three most notable animals of the day (turkey, pig, and goat), and of course, our pumpkins “laying in the dirt.” Ella engaged with this a few times, each time in a slightly different way, but I don’t think she enjoyed it as much as a “normal” sensory bin, and I think the shallowness of the dish had a big part of that, as she kept stopping to pick up beans as they spilled onto the mat. Sensory.

Next Wednesday I will post Pumpkin Week, Part Two, which will include a pumpkin sensory bath, pumpkin recipes, some successful messy play (!), music, art, geometry, and more language building!

What are your plans for pumpkin week?