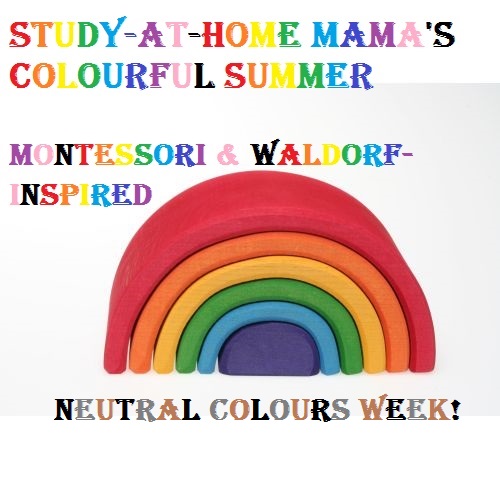 I am attempting to avoid any and all obvious puns for this week’s theme, but I make no promises to make it to the end of the post…
It’s neutral (colours) week! Rather than study each of the neutral colours separately, which would take up an entire month, I decided to spend one week on the four main neutral colours (or earth tones, as some would prefer to call them).

I had some ink sketches which I clipped over Ella’s art table, but if you are a talented sketcher, this would be a great opportunity to make a quick sketch of your child for their corner, or take some pictures of them and have them printed in black and white. Children love to look at pictures of themselves, and it creates another dimension of artistic understanding when they realize that realistic portraits of people they know (themselves included!) can be created with artistic materials.

For this week’s first sensory bin, I used lots and lots of beans! (For anyone curious, we used white kidney, black, and pinto beans.) I also added neutral-coloured foam shapes to the bin for added interest. 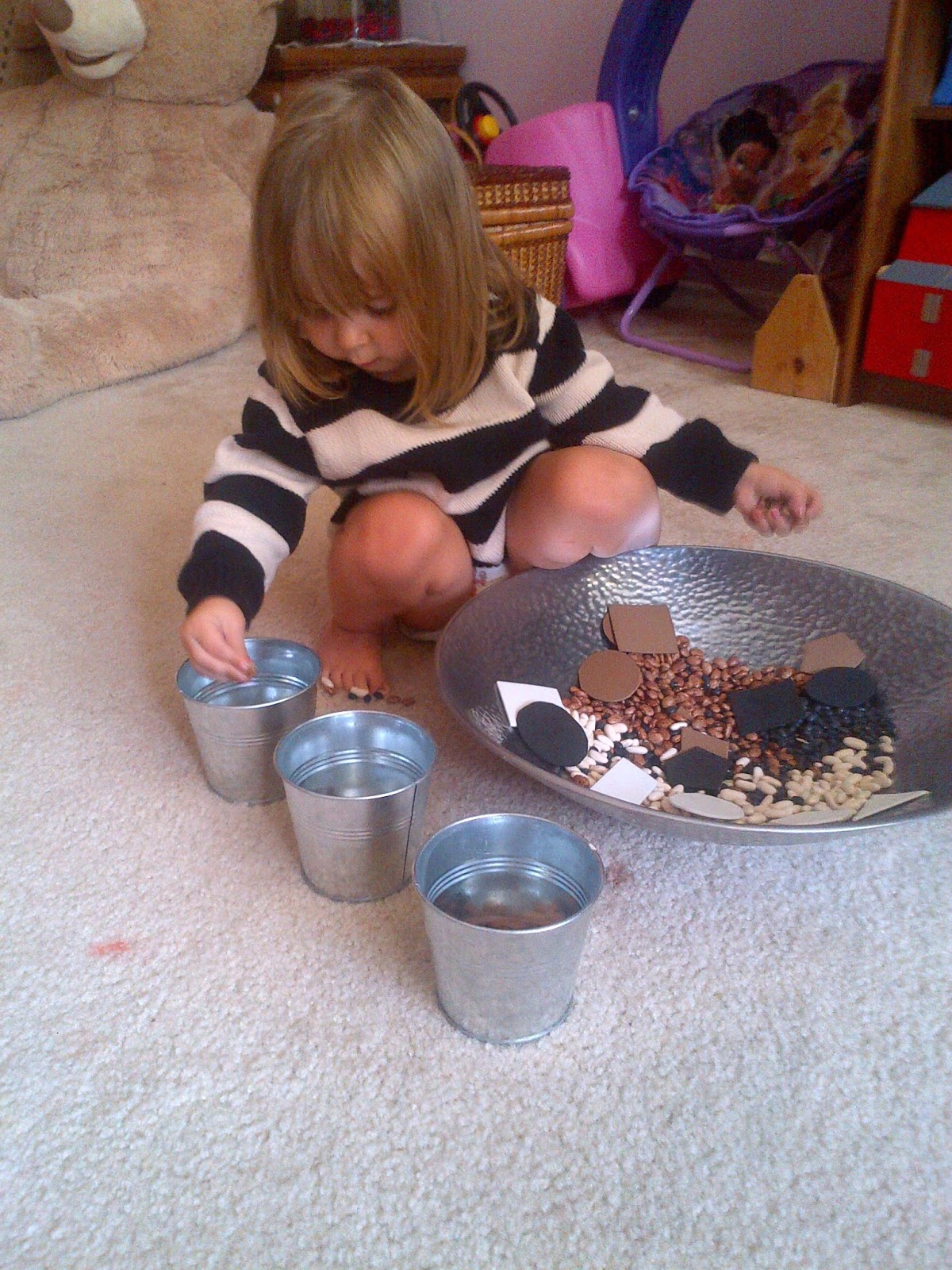 For our second sensory set-up, I pulled out the light-table again, and set up a provocation with black waterbeads, some remaining beans, the foam shapes, neutral pom-poms, black soil, all purpose flour, whole wheat flour, sand, and some seashells (not pictured). This type of activity really invites messy play, so I would recommend doing it outside or in a non-carpeted room that you need to clean anyway.

To go deeper into the selected materials for this provocation, I ensured that the materials were full of different sensory contrasts. Flour is powdery and soft, sand is gritty and rough, while soil is clumpy and rougher than flour but softer than sand; they also all change appearance and texture when water is added. The beans are hard and smooth, while the waterbeads and squishy and soft, and the pompoms are soft and fuzzy. 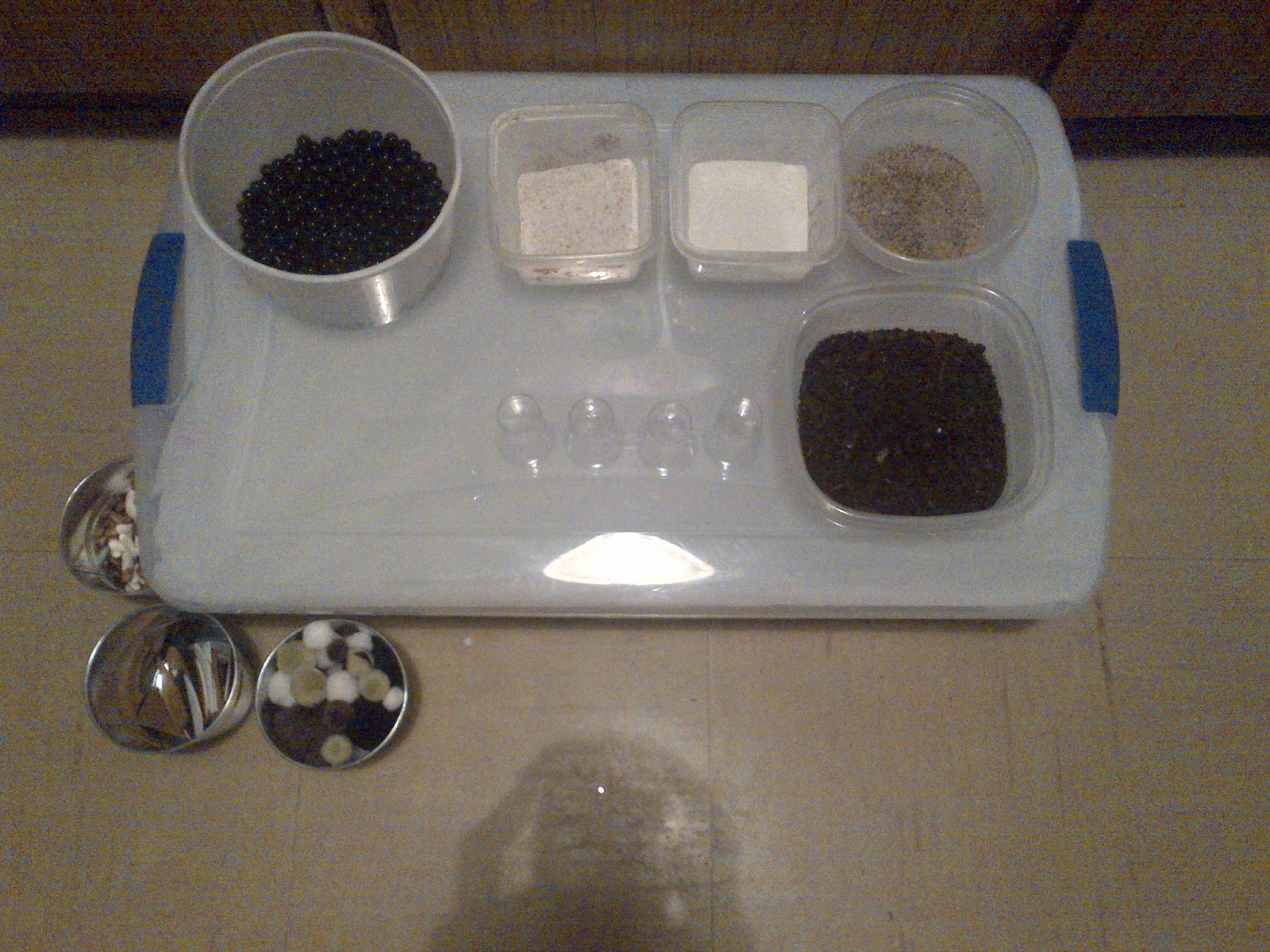 I also realized how many of our plastic animals are neutral-coloured, so I set up a few different activities with them — matching them to our homemade cards, matching them to their natural environments, and also making their sounds! Any animal which Ella expressed a lack of familiarity with we looked up on youtube.

For our sensory bath, I made lots of white bubbles (we usually avoid bubble baths due to the risk of UTIs in girls) and underneath hid the remaining black waterbeads and several of the plastic animals. A black bath might be fun for an older kid, but I wasn’t really interested in trying it as it seemed a bit spooky to me.

For art, we practiced gluing our pompoms and foam shapes to neutral-coloured paper and used our neutral crayons, markers, and pencil crayons. I didn’t introduce neutral paint into our studies because I felt that they would quickly become very “heavy” and it would be hard to replace the effect of black taking over everything in a painting after neutral week was over, and I don’t want Ella to crave filling up negative space with a negative colour. After studying art therapy, I do think its best for children to avoid black paint as it doesn’t blend well with other colours and usually takes over a painting, covering up the process and previous creations. Black paint can be painted upon afterward, however, and I would encourage parents to bring a child back to a dried painting that is black-dominant, and show them how they can now paint over the black with some brighter colours for a vibrant contrast. Black crayons and pencil crayons are a bit different, as they don’t spread as easily, but children can quickly become drawn to filling up their pages with such a strong colour which cannot be “drawn over,” so while I don’t think that it is a colour that needs to be avoided, I encourage being selective about the type and number of black mediums provided. I also don’t think that a child’s being drawn to the colour black is anything to worry about, as is likely that the fascination stems from black’s ability to dominate, which is something that children have a strong desire to do whenever possible. 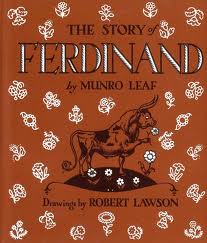 We read Eric Carle’s “Brown Bear, Brown Bear” which neither of us really enjoyed, but Munro Leaf’s “Ferdinand” was a bigger hit and inspired a conversation about not fighting and tactics to use when we feel confrontational. With an older child, this book is a great introduction to pacifism and conflict avoidance.

I also completely indulged Ella in letting her watch Disney’s Dalmation Sing-Along-Songs about a million times.The first time we watched it I created a precedent of dancing with her to the music, which has encouraged her to be active in her subsequent viewings, though I find that she is way more active when dancing to (TV-free) music because she’s not preoccupied by watching a show; many children (mine included) can become so absorbed in shows like this that they miss out on the “active” opportunities that the shows provide, so I think that a playlist or CD of fun songs is a better alternative. However, this is a great option if TV is necessary (i.e., sick days, so Mama can make her coffee in peace, etc).

We ate cassoulet (homemade duck confit, bacon, bread crumbs, and lots of neutral-coloured beans), Magnolia‘s chocolate cupcakes with vanilla bean buttercream icing, bean soup, squid-ink spaghetti with parmesan and alfredo sauce, peach, pecan, and bran muffins, sardines (in tomato sauce), popcorn, wild mushroom “stroganoff” on white and red rice (looks brown), whole fish stuffed with lemons and kale, hot chocolate, pan-fried halloumi, hummus and tortilla chips, and hazelnuts. It was super-easy to think of neutral-coloured food, so we were able to make every meal fit with colour-week, and we surprisingly didn’t have to buy a single ingredient — yes, we even had squid-ink pasta on hand! I was tempted to buy a small jar of black caviar for Ella to try, but we didn’t have cream cheese or red pepper jelly on hand, so I thought I’d wait until we were done our “Shop Our Pantry” challenge.

What will you be doing for neutral week?
(I got through the whole post without any puns! Yay for me.)