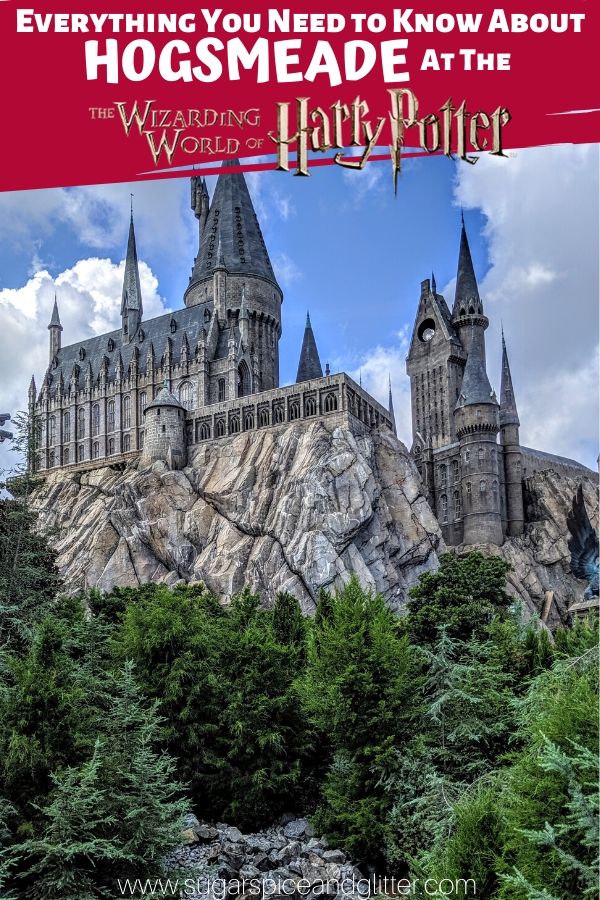 Hogsmeade is a cobblestoned, wizarding village set at the base of Hogwarts School of Witchcraft. And just like in the books, Hogsmeade is dedicated to shopping for magical supplies, magical meals, finding entertainment – and even features a giant Hogwarts castle (home to the Harry Potter and the Forbidden Journey ride). The cobblestone streets, crooked, snow-capped roofs, and looming castle in the background all create an amazing backdrop to your exploring.

Make sure you PIN THIS POST for your Universal Studios vacation planning. 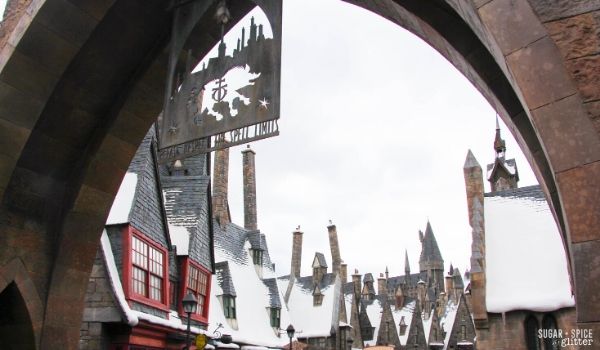 How to Get to Hogsmeade

To get to Hogsmeade, you have to walk through the Bazaar-style shops that greet you upon entry at Universal’s Islands of Adventure, then turn to your right into Seuss Landing. Walk through Seuss Landing and The Lost Continent (Mythos restaurant will be to your left, and Poseidon’s Fury will be to your right), and you will see a large, rustic-looking stone archway that marks the entrance to Hogsmeade.

(You can also access Hogsmeade via the Hogwarts Express, described below.) 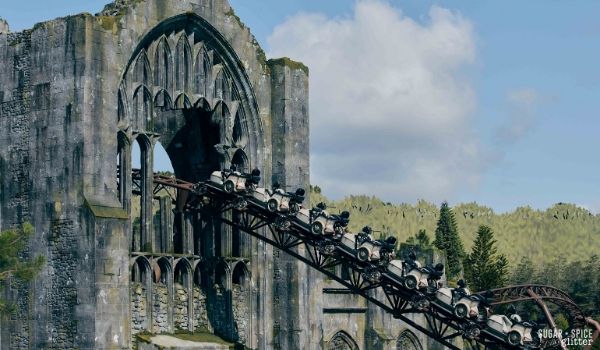 The newest ride at Hogsmeade is Hagrid’s Magical Creatures Motorbike Adventure where guests board motorbike-styled coasters and ride through the Forbidden Forest past magical creatures. This ride features 7 launches and reaches speeds of 50 miles per hour. (You can use Express Passes here.)

Flight of the Hippogriff is the most family-friendly ride in either Hogsmeade or Diagon Alley. It’s located just outside of Hogwarts caslte and spirals and dives around a pumpkin patch, and then swoops past Hagrid’s hut. The ride is short, as is the wait time. (You can use Express Passes here.) 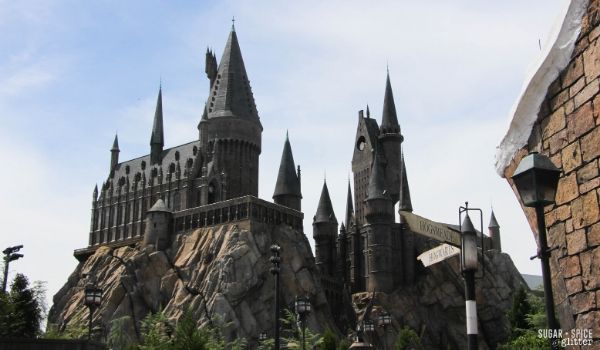 Harry Potter and the Forbidden Journey was hands-down our favorite ride at Hogsmeade! Located in the Hogwarts castle, this ride is a unique take on a dark coaster. The “flying bench” seats are similar to those you’d find on a Twister-style carnival ride and securely hold you in as you flip upside down and are jutted forwards and backwards, bringing your attention to all of the spooky details this ride has in store. Part of the fun of this ride is strolling through the halls of Hogwarts, making the line a bit more enjoyable.

Harry Potter and the Forbidden Journey has a reputation for causing motion sickness, and while we were both fine after our first ride, the first time we ever rode it we loved it so much and made the poor choice to ride it twice in a row. Not advised. Do not recommend. I had to keep my eyes closed throughout the majority of the second go-around – but there are phones at the end of each “bench” that you can get use to connect with a ride operator if you are actually going to be sick and they can arrange to quickly get you off of the ride.

This ride also has a child swap option. You walk the queue with your group, then one adult waits in the child swap room while the other adult (and kids who are tall enough) ride without you. When they are done, you tag out and the other adult gets to ride.

You will need to place your items in a locker (free for 2 hours) while on most of the rides. 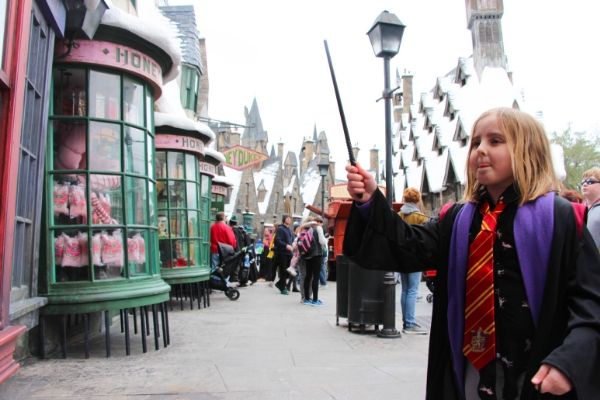 Interactive Wands at the Wizarding World of Harry Potter

One big decision you need to make before you hit the parks is whether or not you will be buying a wand, and if so, will it be an interactive wand?

A standard, non-interactive wand starts around $25, while interactive wands (which can unlock surprises around the parks) are around $45-50. Speaking to staff, I also found out that if your wand ever stops working, they will replace it at no charge.

I think if you’re going to buy a wand anyways, spend the extra bit of money and get the interactive version (for a big family, just get one – there is no need to get separate wands for each child). It’s basically an interactive “treasure map” experience of seeking out the little spots around the two Wizarding parks and unlocking little surprises. 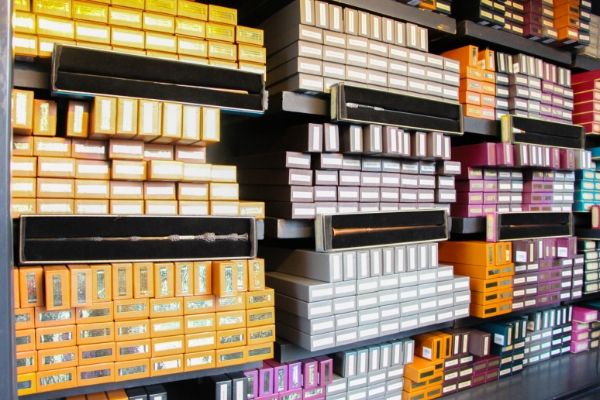 Most of the spells unlock small changes (in shop windows or displays) like opening a giant box of chocolate to reveal a large croaking (chocolate) frog or a magical message appearing on parchment paper. Be prepared that your child will probably want to check off every spell on their map (which comes with the wand) which is easily an hour at each park.

Wands can be purchased at Olliverander’s where “the wand experience” takes place, but please note that only one child per group of about 20 guests will be selected.

I’ve written up a dedicated blog post about the interactive wand experience, so be sure to check that out if you want more information. 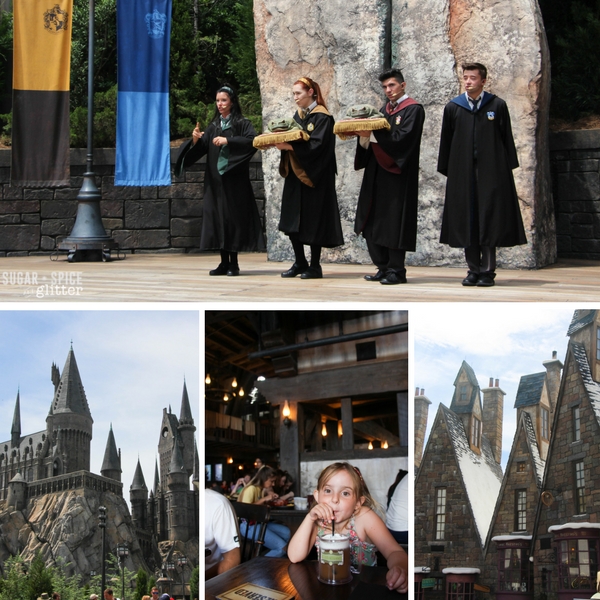 Frog Choir is a a cappella choir found just outside of the Hogwarts Castle at select times throughout the day. These singers perform wizarding songs with realistic, puppet frogs – it’s really fun for little kids.

Triwizard Spirit Relay features students from Beauxbatons, and Durmstrang performing routines – the Beauxbatons’ girls perform dances with ribbons, while the Durmstrang boys perform crazy acrobatic martial arts with sticks. (No students from Hogwarts make an appearance, sadly.) You can also take pictures with the students after the performances!

You must have a 2-Park ticket to be able to ride Hogwarts Express. The entrance is just to your left as you are exiting Hogsmeade, right after the steam engine display. (There is a small street sign that directs you down an small path to Hogsmeade Station.) The experience changes based on whether you are going to or from Hogwarts.

However, if 2-Park Tickets are not in your budget, don’t worry – you’re not missing a whole ton. It’s a fun way to transfer in between the parks and there is some entertainment via embedded screens in your train compartment, but it’s not a make-or-break experience. 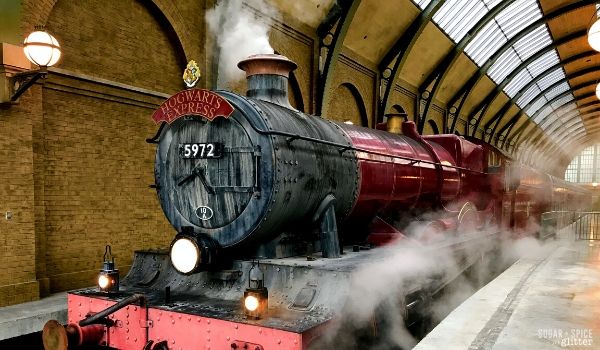 There are little surprises at every turn, so my biggest piece of advice while visiting Hogsmeade is to take your time and pay attention to the details. There are so many magical details and references to the movies hidden throughout the park.

At the Hog’s Head Tavern, if you stand too close to the staircase while waiting for your drinks you can hear a witch complaining.

If you loudly say “Voldemort” near an employee in any of the shops or restaurants, you’ll elicit some strong reactions.

The Hogwarts Castle Tour is not widely known, but you can inquire about it as soon as you enter Hogwarts Castle. This unique experience lets you see parts of Hogwarts that you wouldn’t otherwise get to see in the ride queue, and you get to go at your own pace as you’re not holding back other guests.

Moaning Myrtle can be heard, well, moaning in the bathrooms. 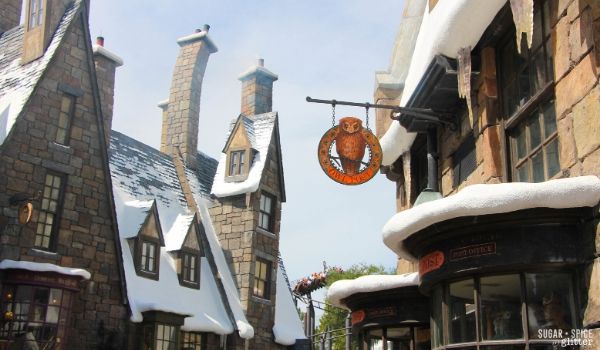 You can send a postcard from Owl Post and it is stamped with a special Hogsmeade stamp – a fun way to send a piece of the parks home to a loved one. (You can also spot Howlers in the window at Owl Post – they have several different reasons why you may be getting “howled at” so try to watch a couple.)

There are two secret wand spells that we’ve discovered, both are next to Hogsmeade Station just after the Hogwarts Express:

Many of the experiences can only be unlocked with wands, but if you choose not to purchase the wand experience you can still keep an eye out for other guests casting spells at various points throughout the park and see what magic they unlock. 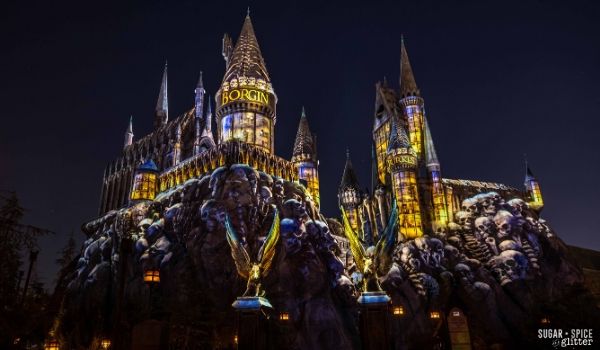 At select times throughout the year, Hogwarts Castle is illuminated with either the Nighttime Lights or the Dark Arts. This is a lights and music show that takes place at night. 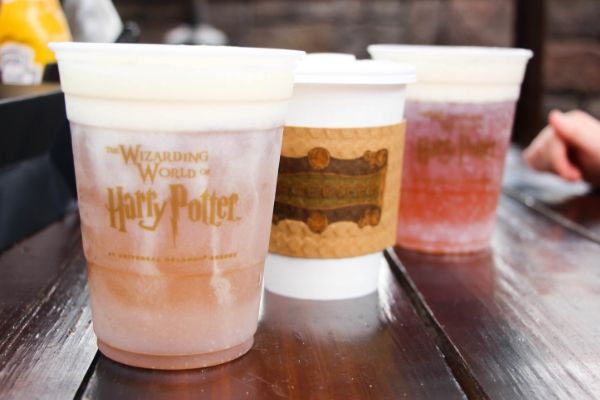 Where to Eat in Hogsmeade

Hog’s Head is a counter-service bar with both nonalcoholic and alcoholic beverages. It’s the only place to purchase alcoholic beverages at Hogsmeade – but note, the employees cannot add any alcohol to Butterbeer (so you’ll have to make those concoctions yourself after ordering).

Alcoholic options include stout, lager, ale, draft beer, “Fire Whiskey” and a selection of wines – and rumour has it that you can ask the bartender for a unique mixed drink. 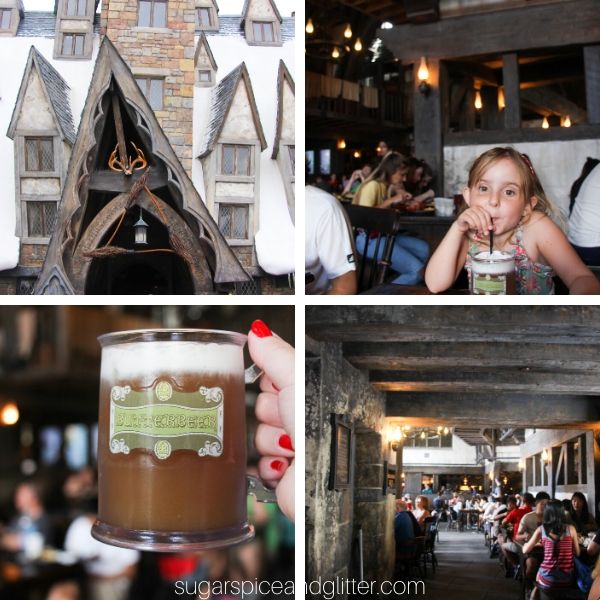 Three Broomsticks is the only place to get meal at Hogsmeade. The breakfast options are quite boring, but filling, while lunch and dinner offer impressive platters (the regular-sized platters easily fed Ella and I, and they also offer a four-person platter for $61). Options range from fish and chips, to beef pies with a side salad, rib platters with corn and roasted potatoes, turkey leg platters with fries, a soup and salad combo, and of course, desserts including Butterbeer potted cream, apple pie, chocolate trifle, and chocolate cake.

You can pick up to-go treats at Honeyduke’s, including cauldron cakes, pumpkin pasties, chocolate frogs, etc.

There are also a couple carts where you can purchase non-alcoholic drinks and to-go snacks like chips or cut veggies. 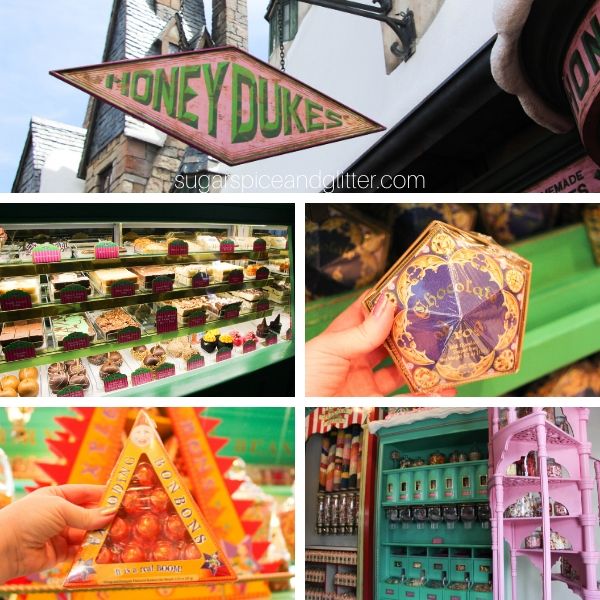 If you’re really looking to shop, your best options will be found at Diagon Alley, but you can still find some fun options at Hogsmeade.

My favorite part of the shops is the decor – don’t forget to look up while shopping or you’ll miss out on some magical details!

Every store is completely different, so I’ll provide a brief description so you can prioritize:

One thing to know if you are shopping is that you can have your purchases sent to the park exit for you to easily pick them up on your way out – or, if you are staying on property, they can deliver it to a Universal Orlando hotel. (Just let the cashier know you’d like to take advantage of this free service when you’re making your purchase.) 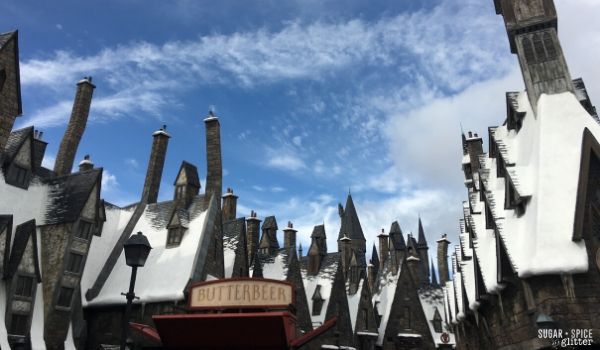 The bathrooms at Hogsmeade are home to the infamous Moaning Myrtle. Labeled the “Public Conveniences,” the bathrooms are located just before the stage for the live performances, after the shops.

As of this writing, no change tables are located in the men’s washroom.

Universal Studios has several ways that they accommodate guests which can be read more in depth here.

Strollers are welcome in every store except Olliverander’s, however you will find many stores to be a tight squeeze so you may want to just park the stroller at Ollivander’s. You can also rent a large locker at the entrance to the park if you decide that the stroller is just getting in the way.

Water fountains can be found in a couple areas – the easiest to find is just outside of the restrooms, and all of the restaurants will allow you to fill up a cup of water or give you a cup of water. 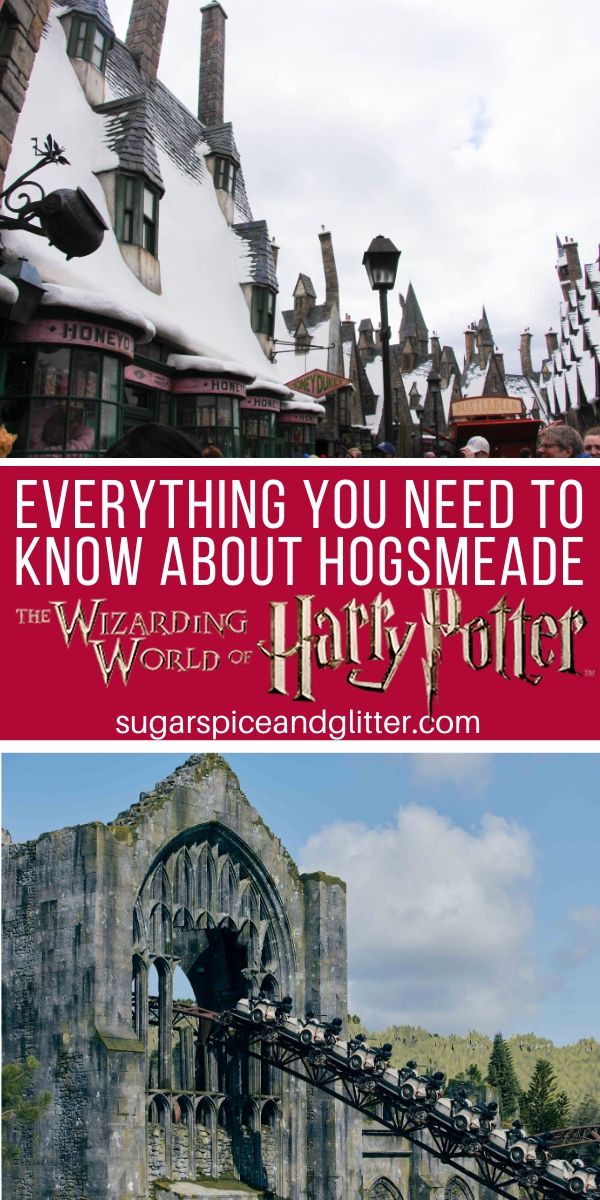 If there are any additional questions about anything I covered (or didn’t cover) about Hogsmeade, please let me know and I will add it in! 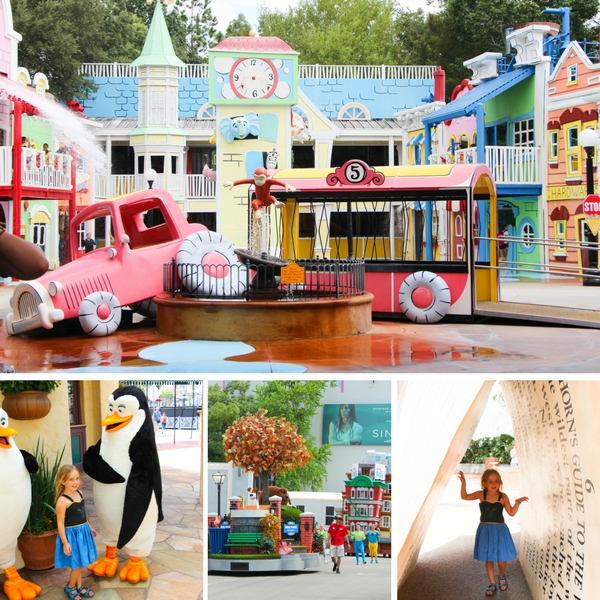 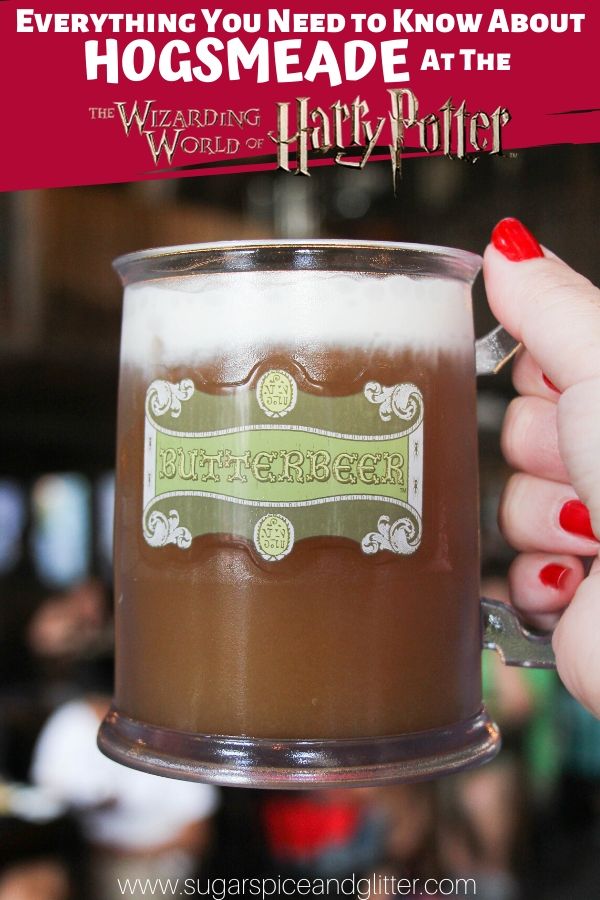 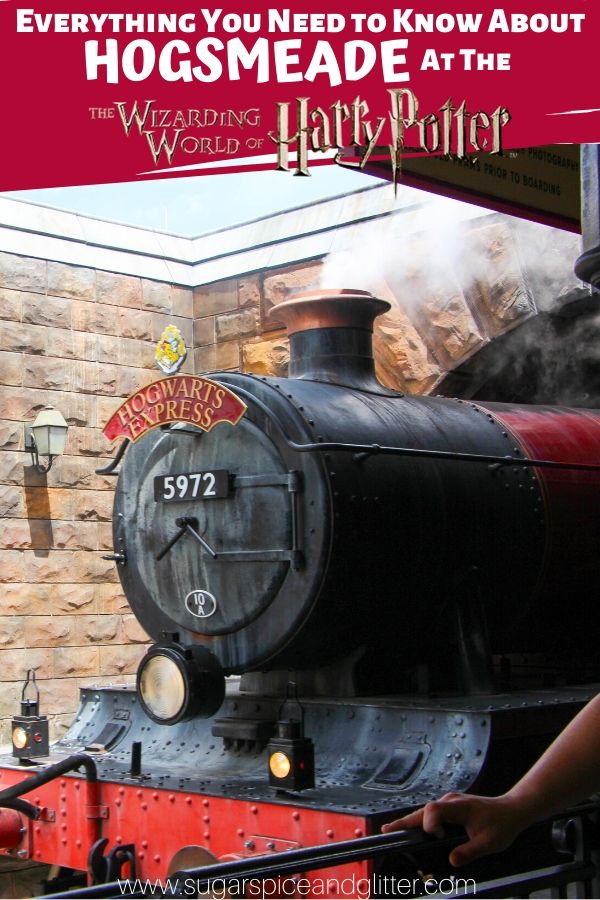 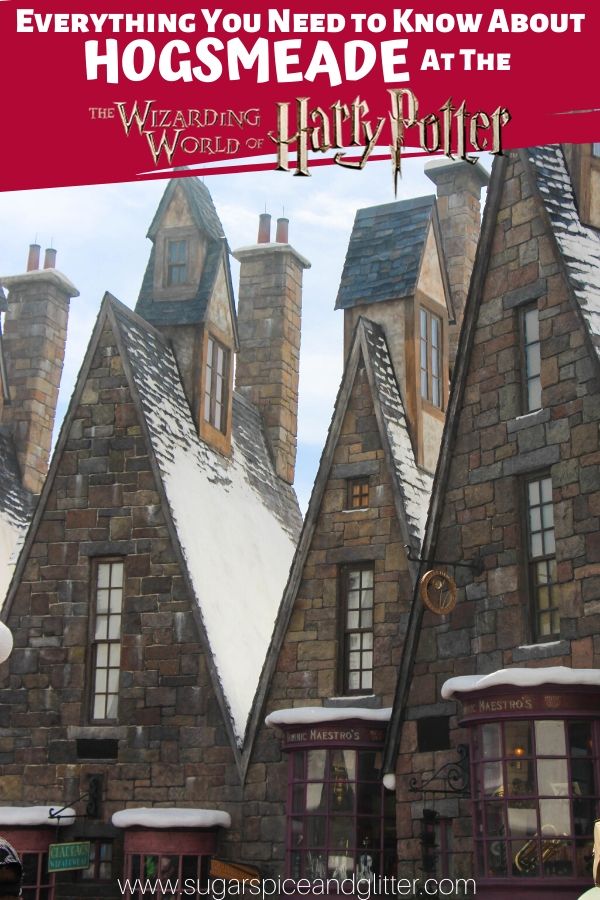 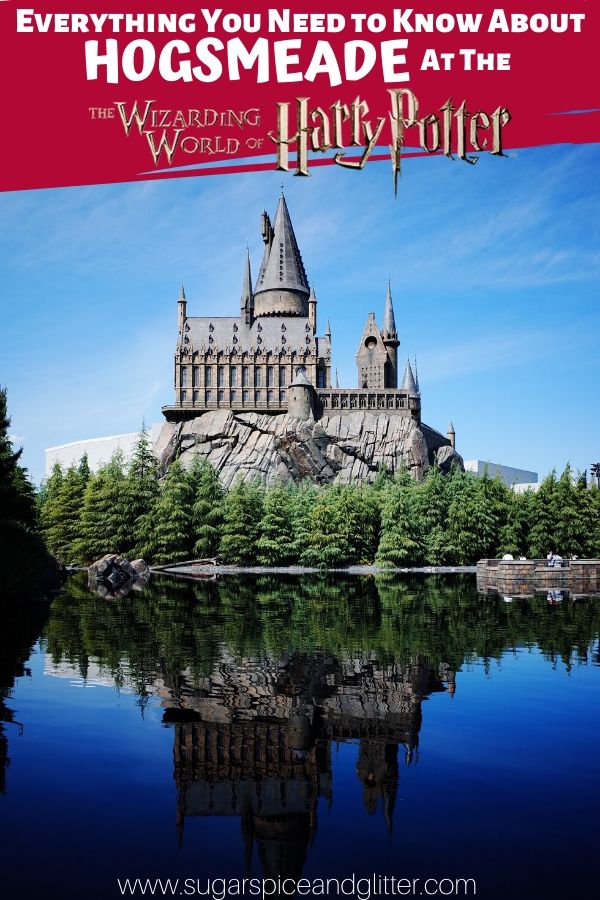 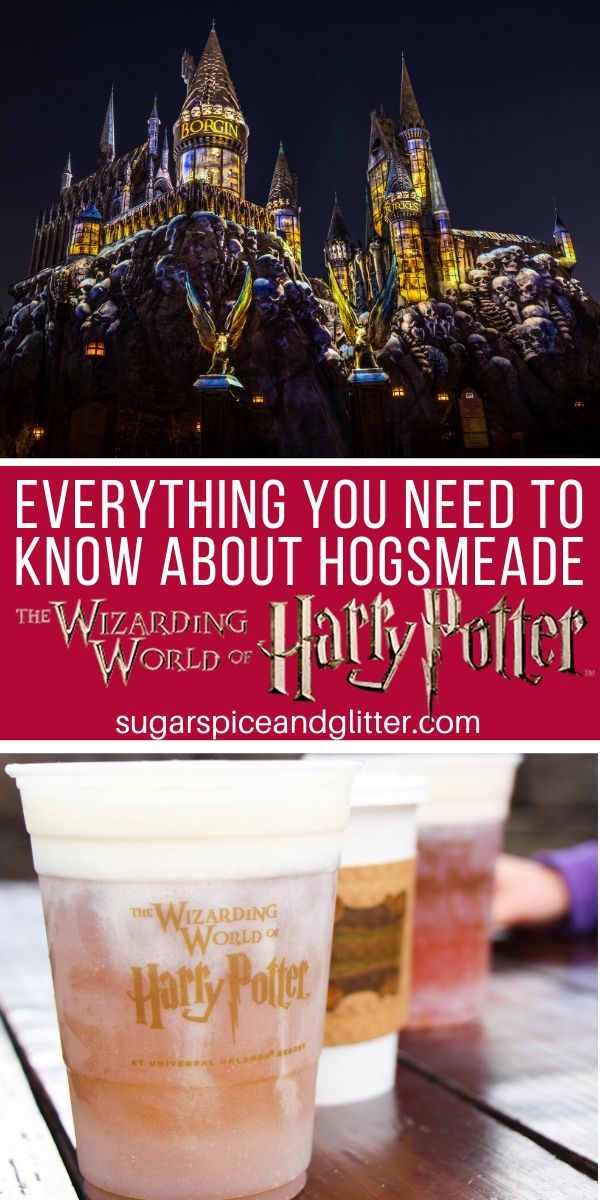 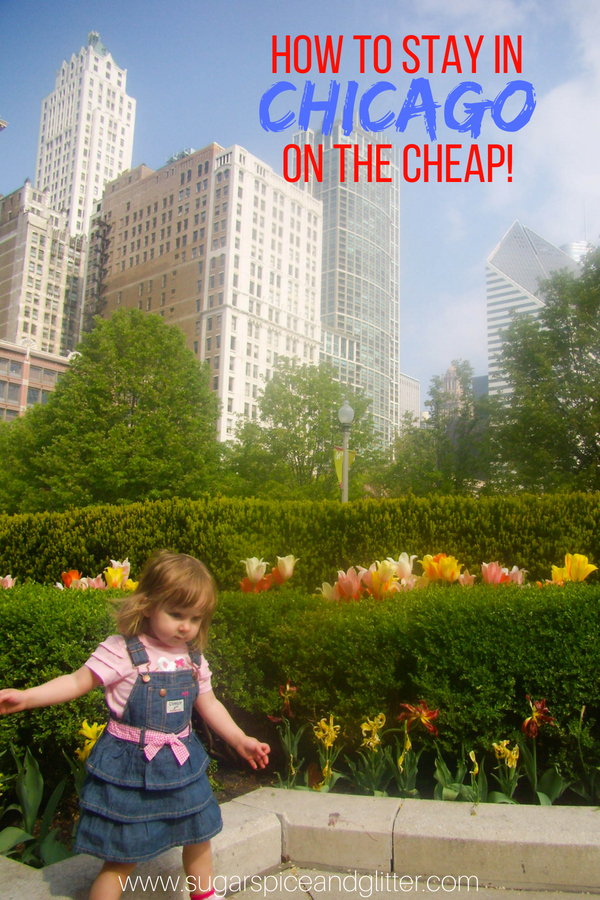 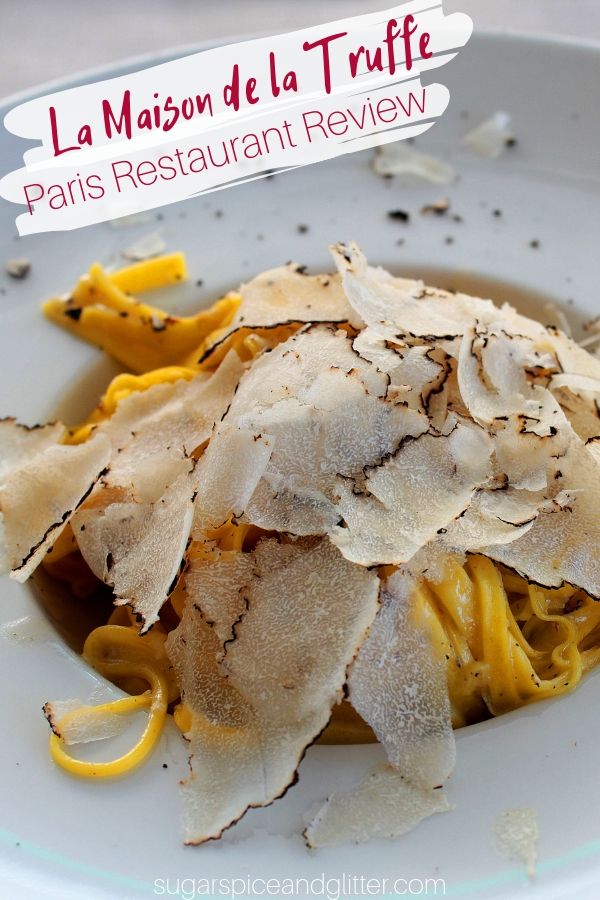 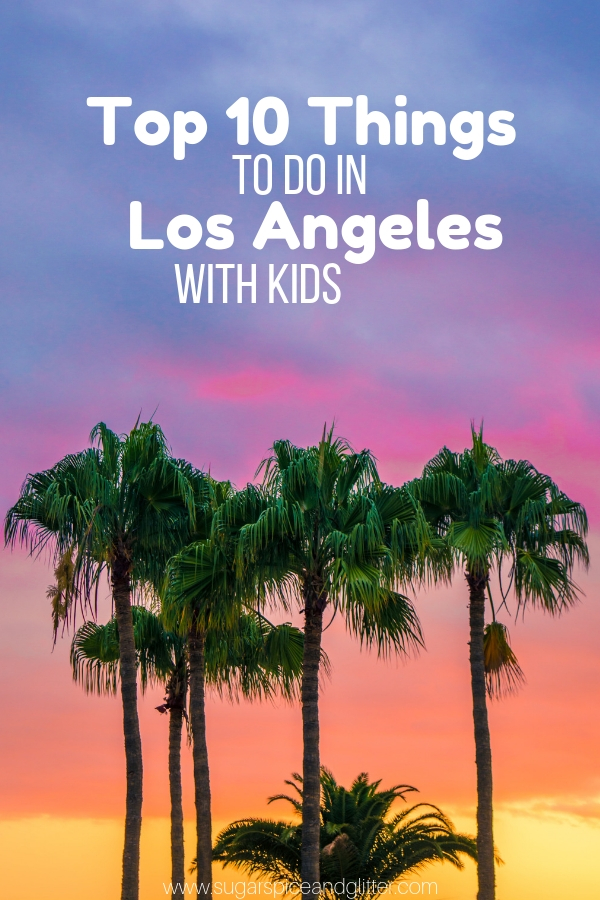 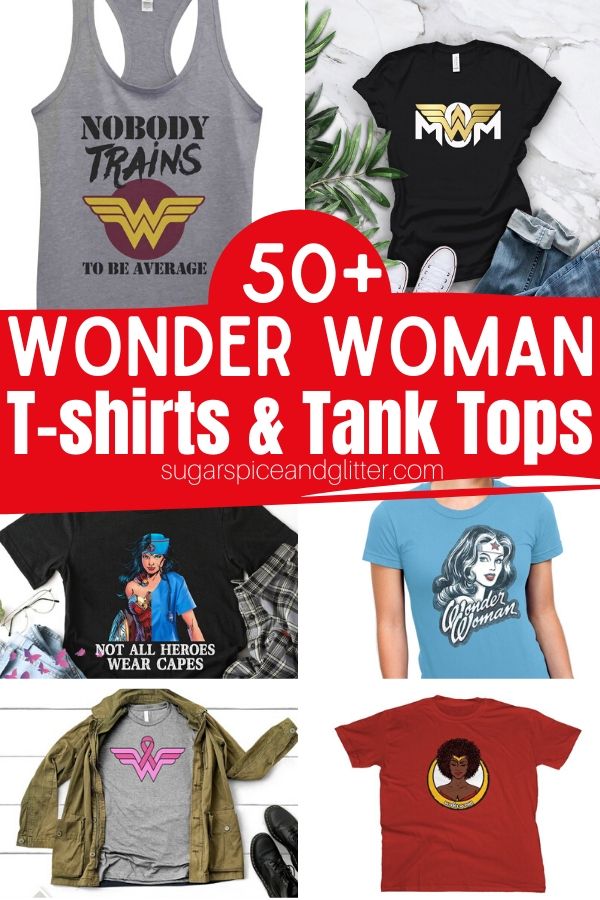 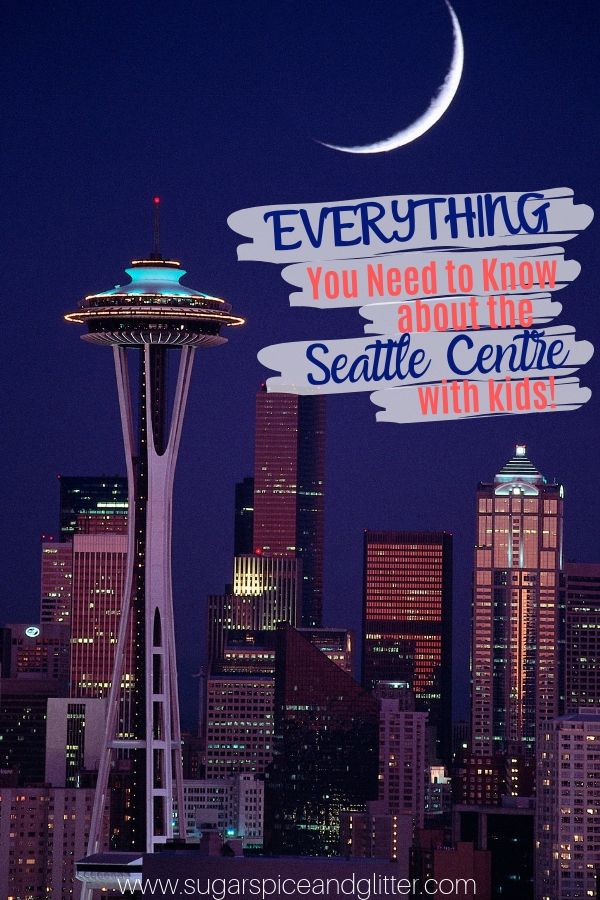