Sometimes, my crafts & provocations are well-thought out. I put up pictures, and include a variety of materials, and textures, and tools for inquiry… and sometimes I just have enough time to pull out a bag of recyclables, put on a Youtube video, and just get out of the kids’ way!

In case you were wondering, the latter is what happened for today’s Chinese Dragon Dance Craft. 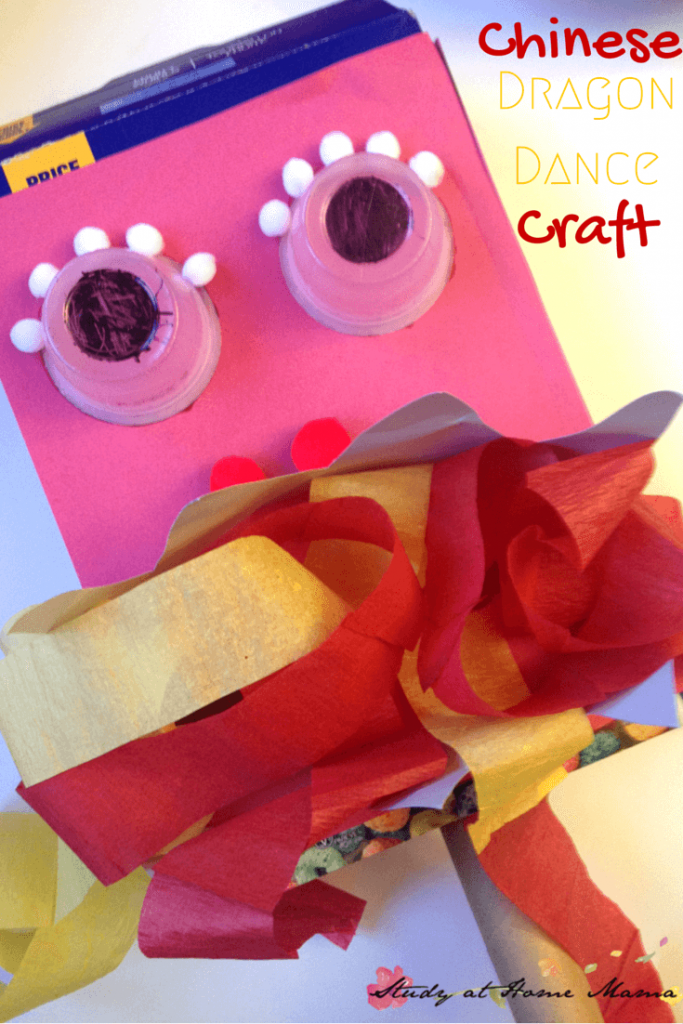 In all honesty, I don’t know that I can rightly call this a Reggio provocation. While I did engage the children in a story about Chinese New Year and share some of my favourite memories of Chinese New Year as a child growing up in Beijing, all I did was put the tablet on the work table in sleep mode (a Chinese Dragon Dance queued up once it was turned on) along with some recyclables and craft tools, and then stepped back and let them to it. 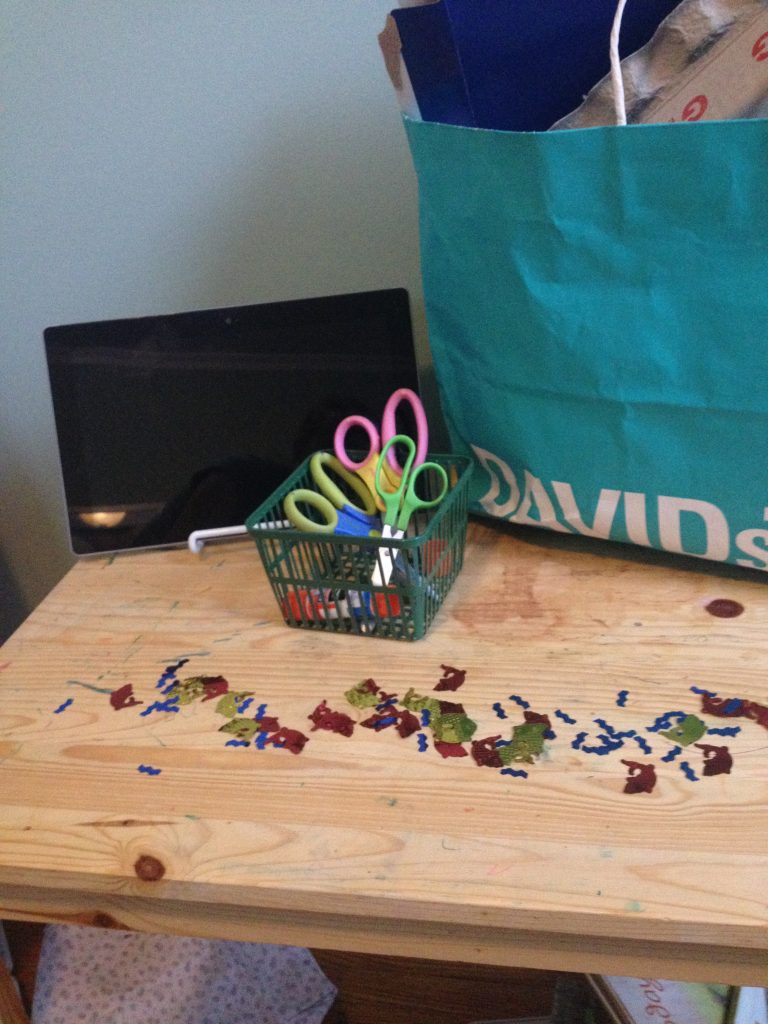 Ella and Miss N are definitely our crafty kids, so it was really cool to see them actively engage their friends in assisting them with this project and take on a gentle leadership role with creating their very own dragon.

They brought the bag of recyclables and gathered some other craft supplies and brought them into the kitchen. They tried a few unsuccessful ways of assembling their dragon – like painting on cleaned applesauce containers for the eyes, which we learned flaked off, just like the paint flaked off the plastic containers while we were making our Pocahontas drums. 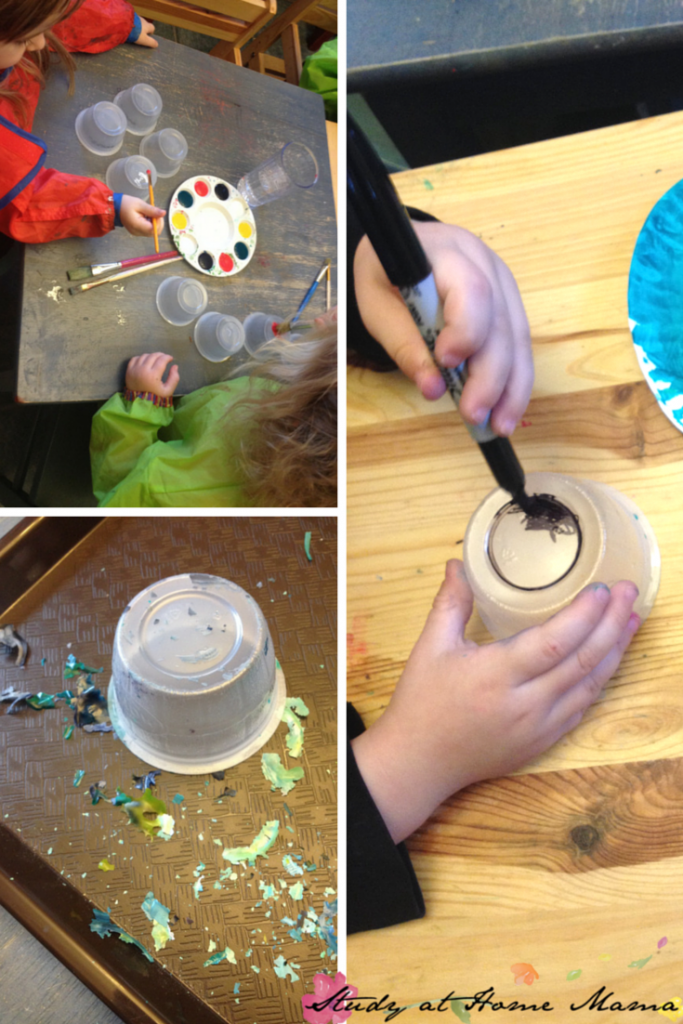 While they were all working – and when I set out the materials – I envisioned individual dragon crafts. I thought maybe the paper plates would turn into masks, while the egg cartons might be great for a long, dragon body.

Instead, they all slowly migrated toward working together on the same cardboard box. After trying to initially paint the box red, Ella and Mr. W worked really hard to cover the whole box with red construction paper. He then used markers to turn two applesauce containers into eyes, and Ella came up with the idea of attaching white pom poms for eyelashes and red ones for nostrils. (I helped with this part as she asked me to use the glue gun for it.)

Miss N repositioned the teeth and the “fire” paper streamers a few times, and Mr. W very diligently stayed holding the teeth while they dried with clear school glue until I offered to add a few dabs of hot glue to make it dry faster. 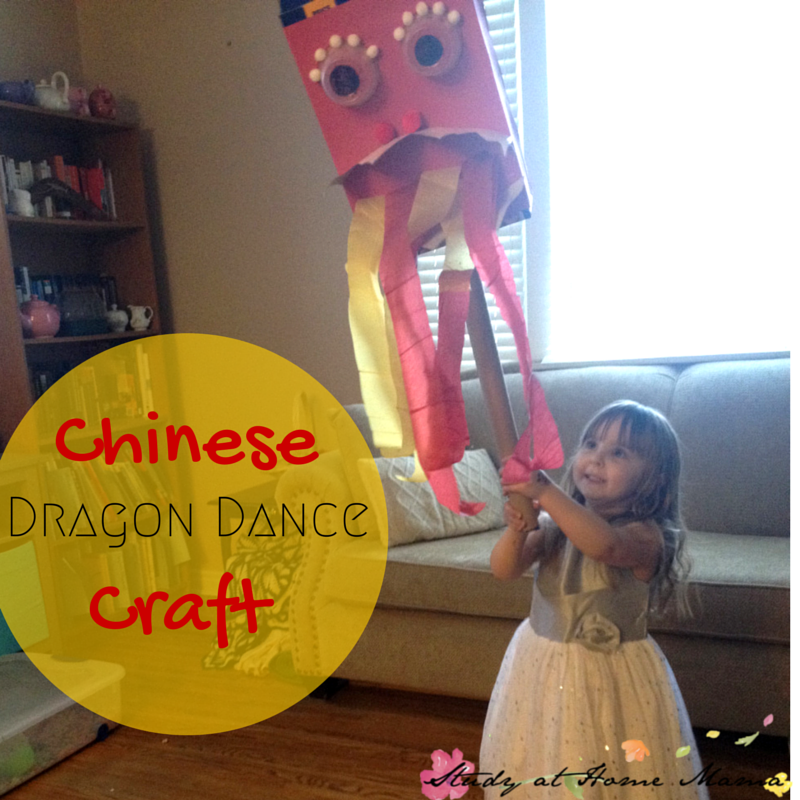 They were all so proud of their Chinese Dragon Dance craft. I suggested adding a long cardboard tube at the bottom so we could try our own dragon dance with a twist.

We noticed that in the parades, often there was someone with a ball on a stick dancing in front of the dragon, maybe “teasing him.” So, I put on some Chinese folk music and we used a red balloon and tossed it back and forth between the kids while one would pretend to be the “dragon in the middle” chasing the balloon. (It would have been nice to use a ball on a stick and try to emulate the real dragon dances, but that wouldn’t have involved all of the kids so it wasn’t ideal for us.)

Later, we ate some dumplings and used our kid-friendly chopsticks for lunch. I’m hoping to make some Chinese desserts with the kids later this week, and I might bring out our Asian continent box to engage them further. 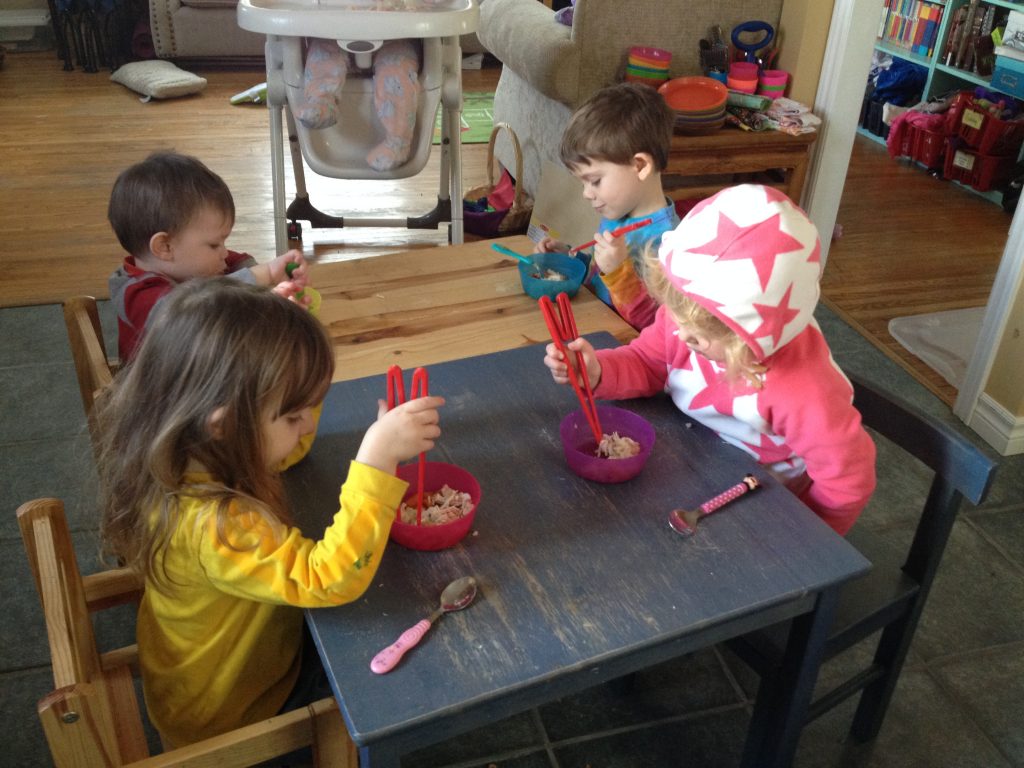 If you liked this post, you might consider signing up for our weekly newsletter full of parenting inspiration and hands-on learning.

I’ve joined together today with a few other bloggers who like to encourage multicultural learning for kids, check out their ideas below!

TP Roll Chinese Lanterns from In the Playroom

Sheep Letter Recognition from Something 2 Offer

Dragon Painting for Preschoolers from Learning and Exploring Through Play