One of my favourite ways to engage the children in cultural appreciation is to give them a hands-on activity or craft that helps them experience a bit of the culture that they are learning about, and develop an awareness at a deep level that our differences are rich and beautiful. (One of my other favourite ways is through eating multi-cultural food – especially mulit-cultural desserts!) 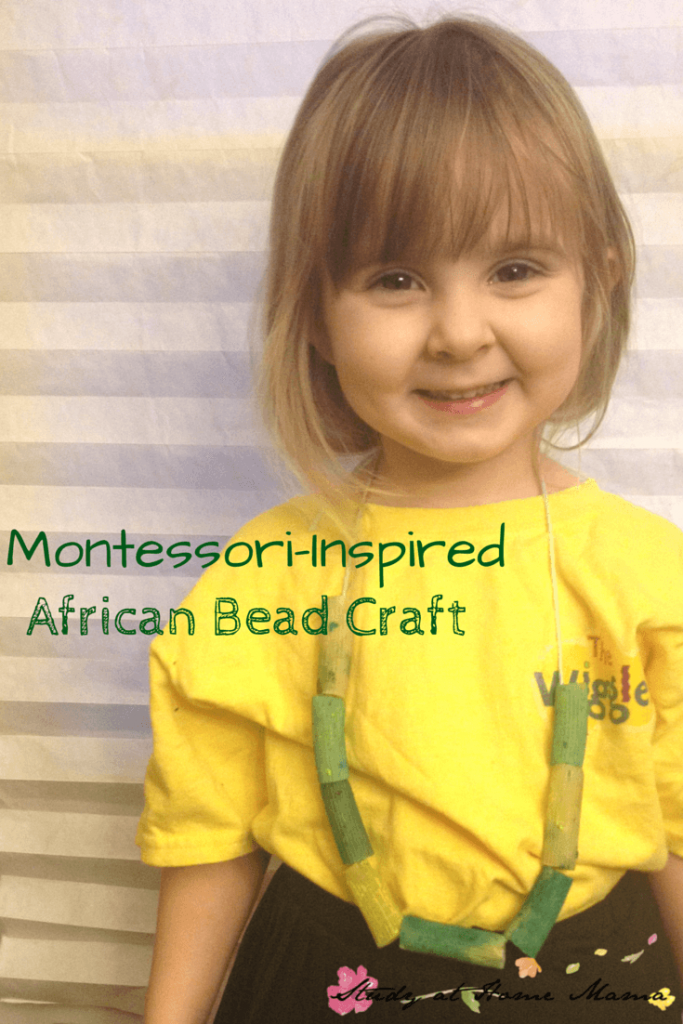 After making our felt world maps, the children all developed interest in Africa. For Ella, it was likely due to The Lion King and Loula Goes to Africa, Miss N used to live in Africa, Mr. E loves the colour green (which is the colour used to represent Africa on a Montessori world map), and Mr. W seemed to really like the word.

So, rather than study North America first, as was my plan, I decided to instead follow the children’s interest and engage them in a study of Africa, starting off with making African bead necklaces. 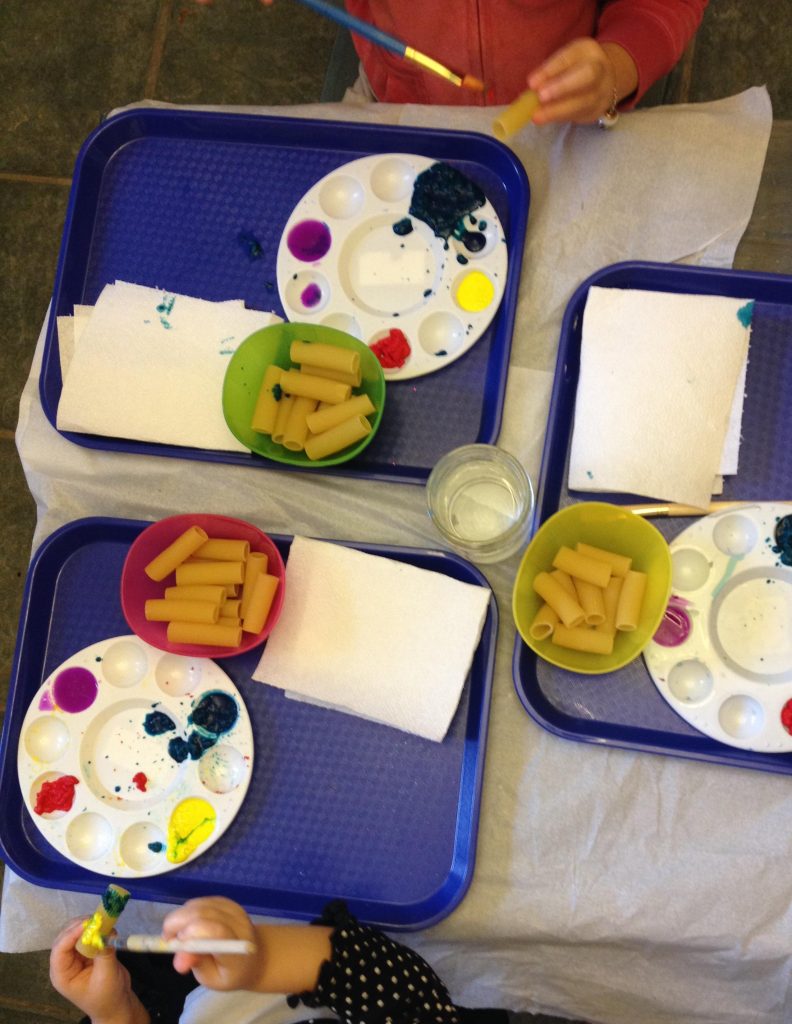 Beads are a very important part of African culture: there is evidence that the craft has existed on the continent for 75,000 years and beads were used for their “powers,” and are still used to signify cultural status or mark important cultural events.

We did two versions of this African craft: a painted pasta version that is easy for ages two an up, and a slightly more advanced paper bead making.

The African paper bead craft was challenging, but most of the older children were enthralled with the process and worked meticulously on their beads. I would say this is a perfect activity for a child who is beginning to write letters or draw representational figures in their art work (demonstrating 4-6 year old fine motor skills). 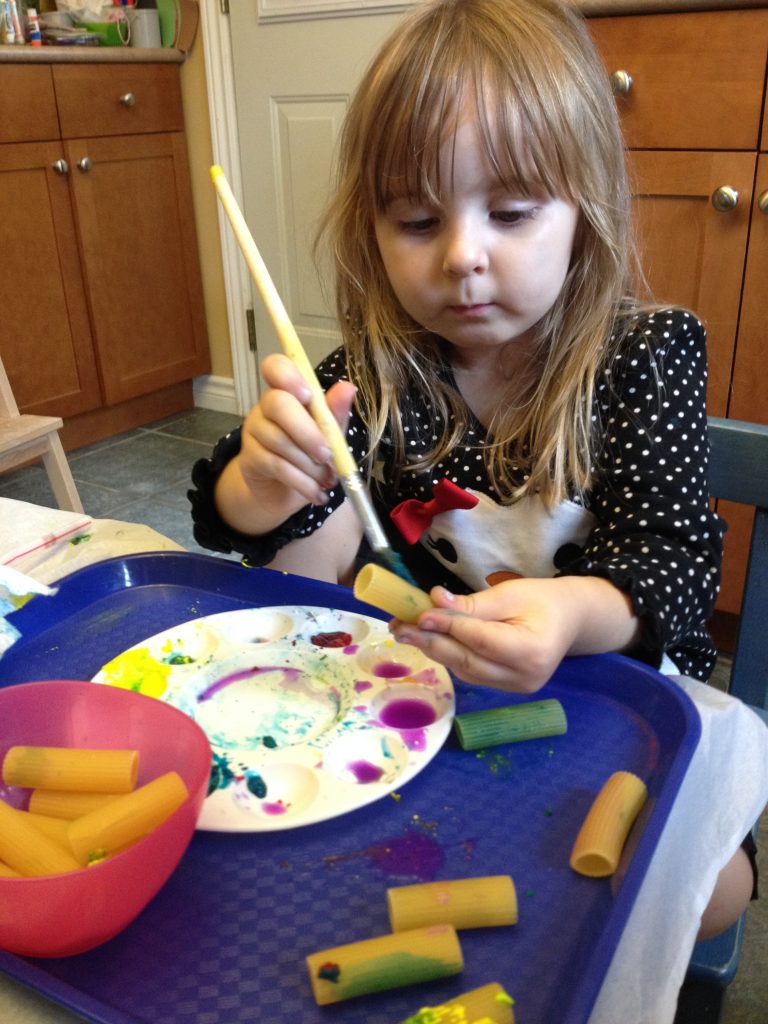 To make the painted African bead craft, I set up a Montessori-inspired tray for the children with the following:

I placed one water glass on the table, as an opportunity for the children to co-cooperatively work together in taking turns cleaning the water. I love doing subtle things like that to encourage empathy and teamwork.

I also covered the table with some tissue paper to make it obvious when paint went off of the tray (control of error) — this is an amazing Montessori principle, where I don’t have to give reminders or point things out, I set up the environment to naturally self-correct the children and provide them opportunities to easily observe and alter things that aren’t working. 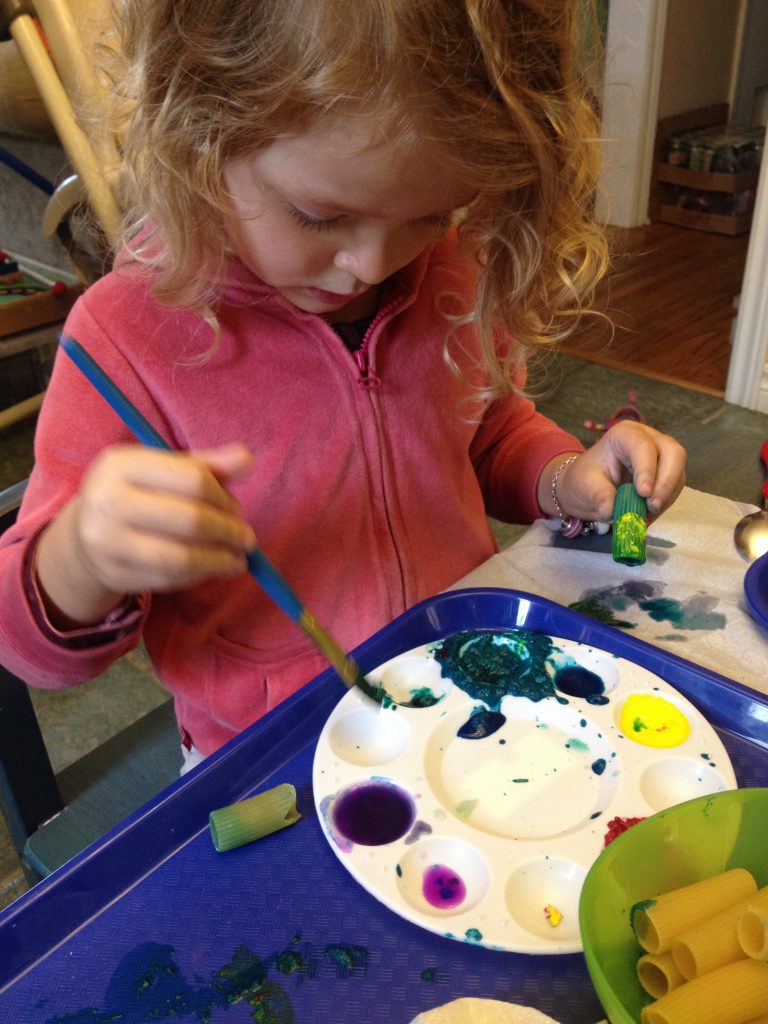 Holding the noodles and manipulating them to paint them all around is a fine motor challenge in itself, but after the noodles have been painted and dried, threading them onto necklaces is an additional challenge.

We used yarn, so I wrapped some transparent tape around one end to make it easier for the children to string their “beads” onto it. Just cut that piece off when they are done, as it could be scratchy when worn.

The kids loved making and wearing their African bead necklaces and were so excited whenever a person in one of our books about Africa was wearing a necklace just like theirs. 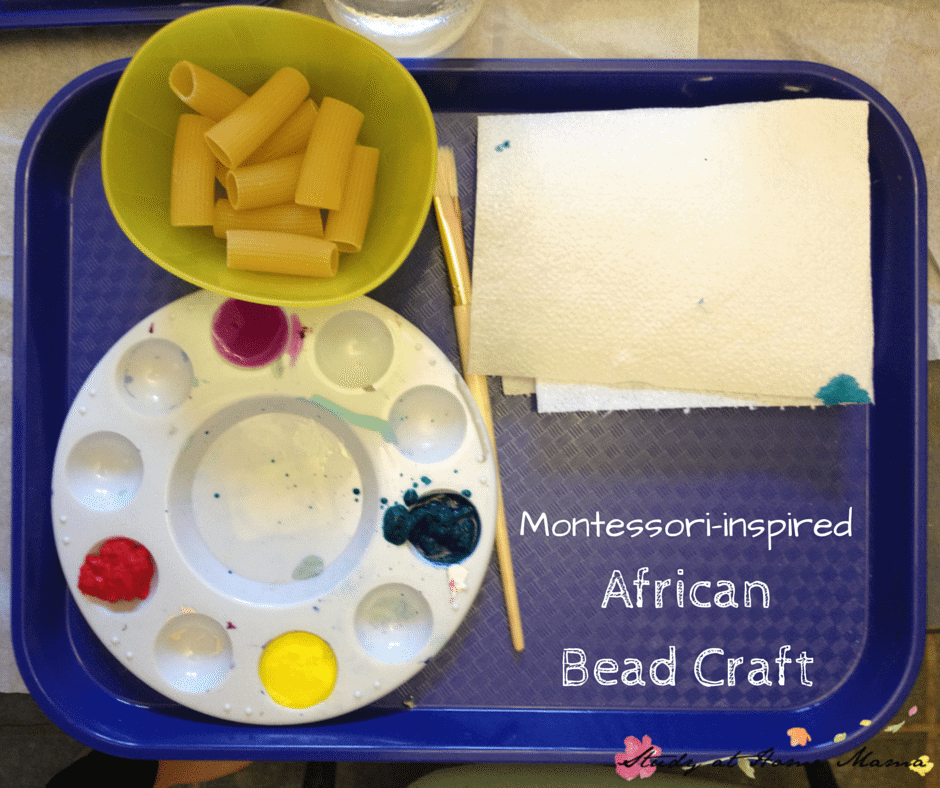 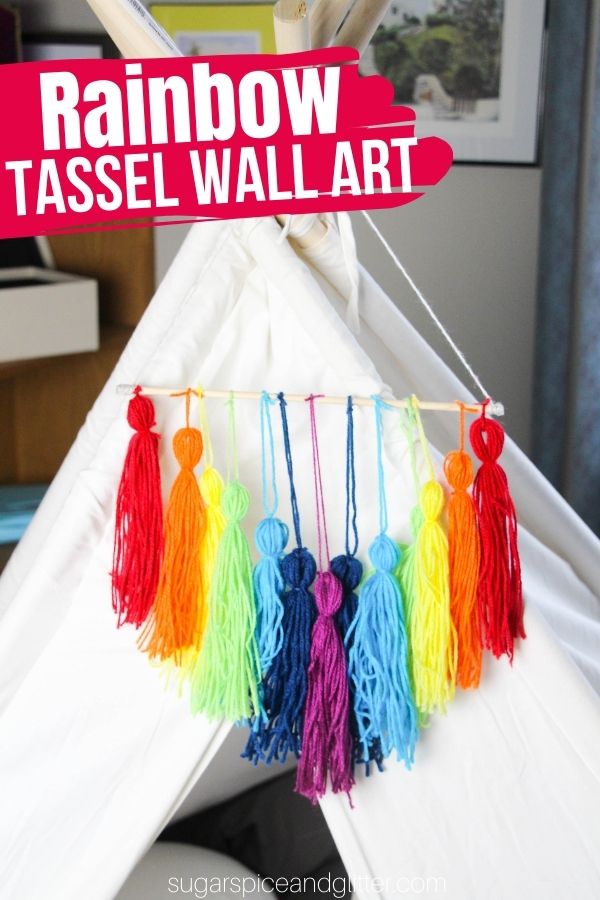 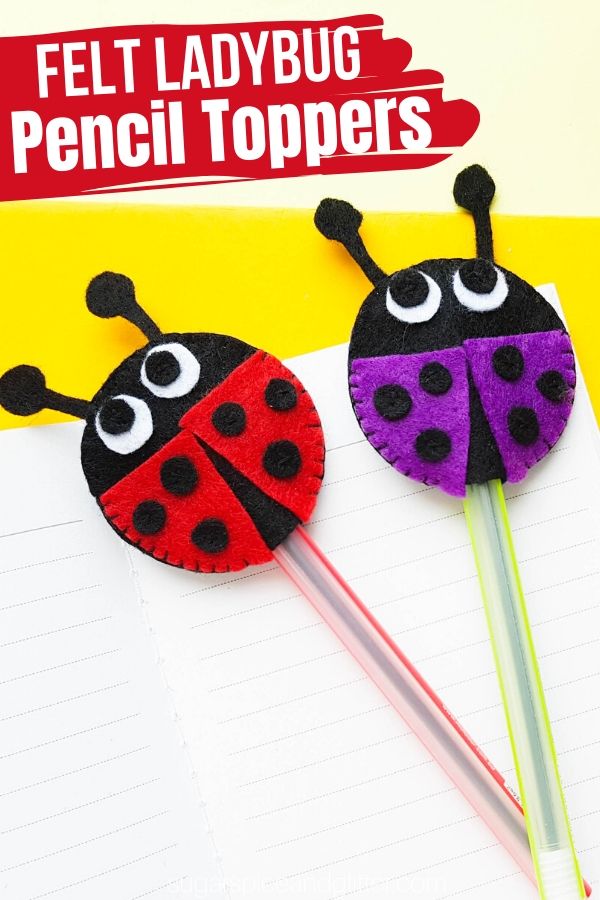 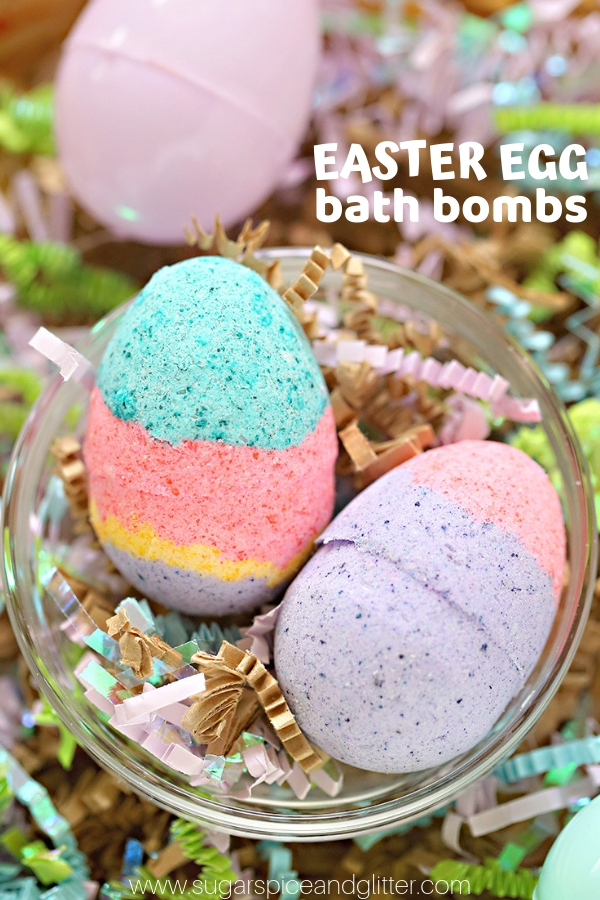 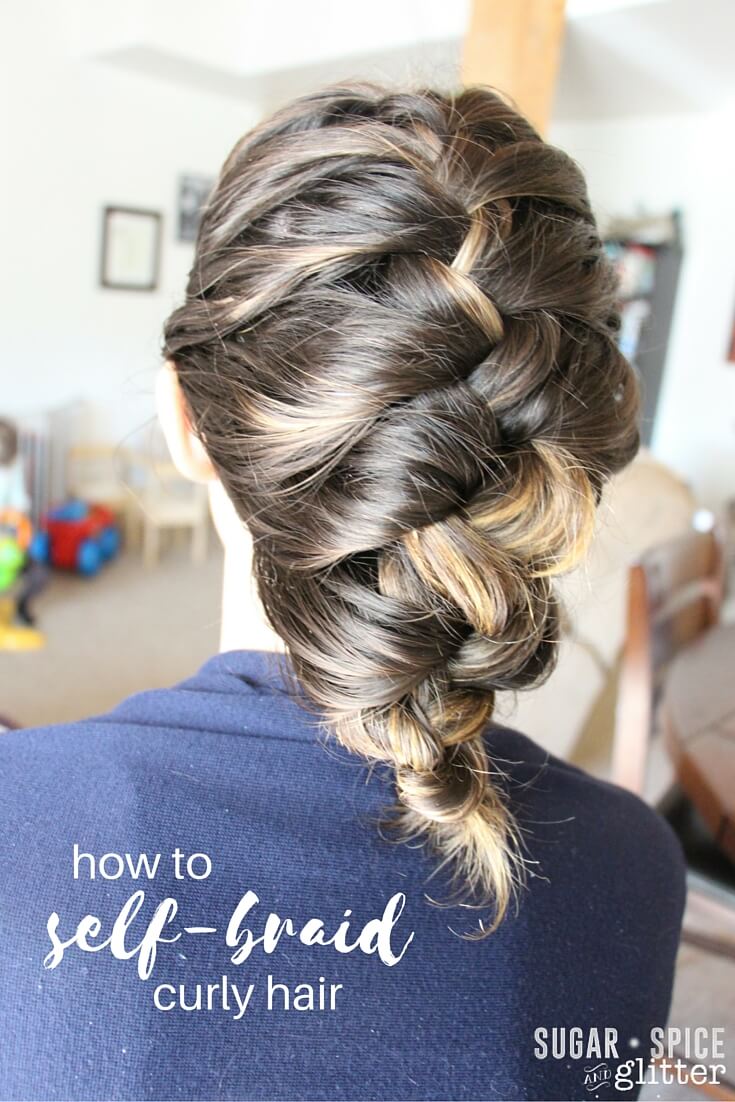 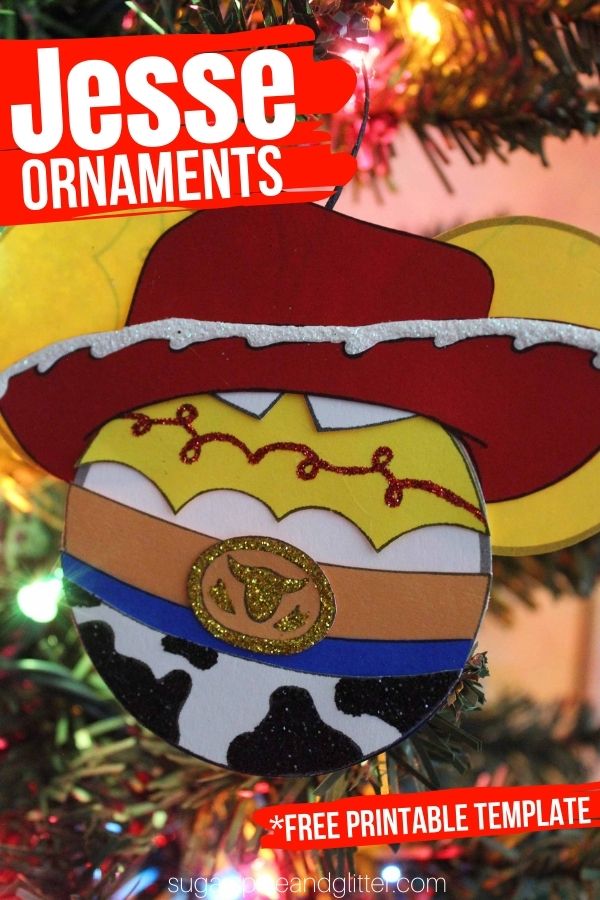 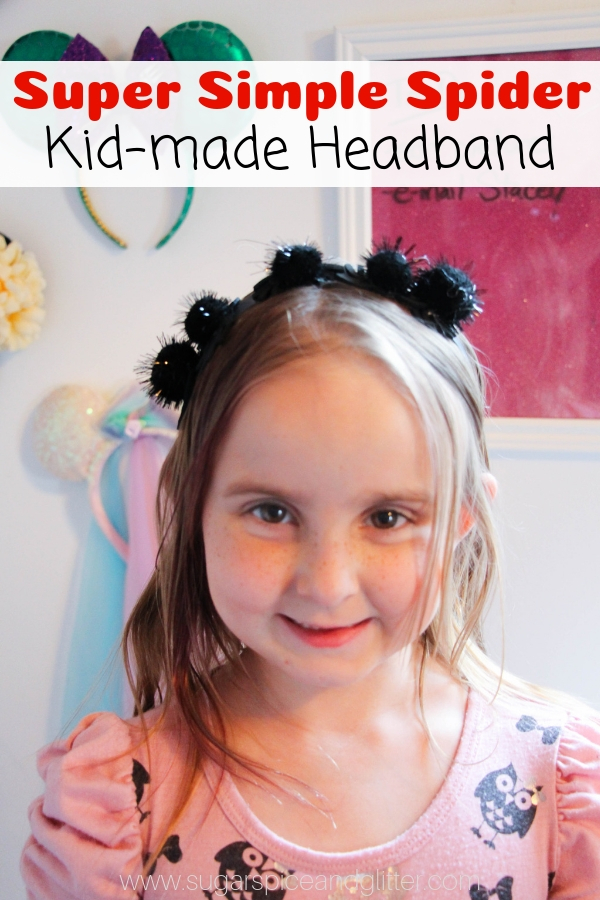