This shop has been compensated by Collective Bias, Inc. and its advertiser. All opinions are mine alone. #HogWildThrowdown #CollectiveBias

The following content is intended for readers who are 21 or older.

My brother recently saved up for a custom made BBQ, so I thought I’d surprise him with a homemade BBQ gift basket with some homemade BBQ Sauces & Spice Rubs, and some cute BBQ essentials! 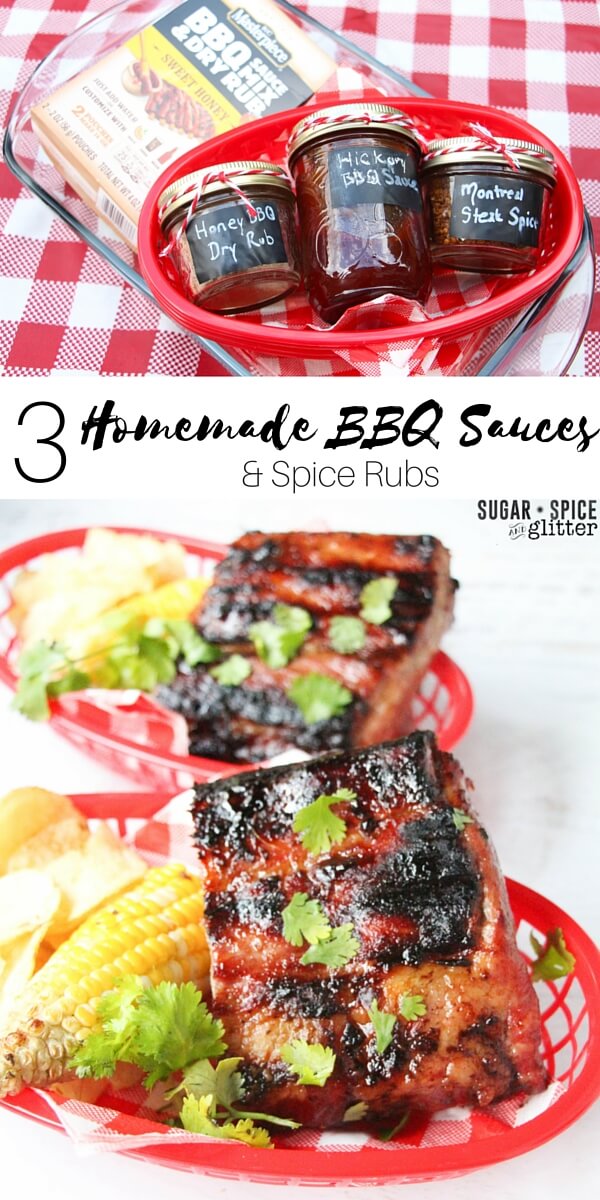 I’m the oldest of a blended family of 6 kids – and my brothers are definitely my favourites! They are the youngest at 7 years younger than me and it’s been very bizarre and cool seeing them become adults these past couple years.

My youngest brother loves entertaining and really pores himself into learning about what he’s doing – whether that’s learning how to make a variety of cocktails or becoming a grill aficionado. He first bought a cheap charcoal grill to learn on and used it until it was basically falling apart before upgrading.

He invited Ella and I over for a BBQ but I insisted on bringing everything and hit up our local Walmart to grab Smithfield® ribs, ingredients to make some delicious homemade sauces, and some cute things to set an outdoor picnic table. 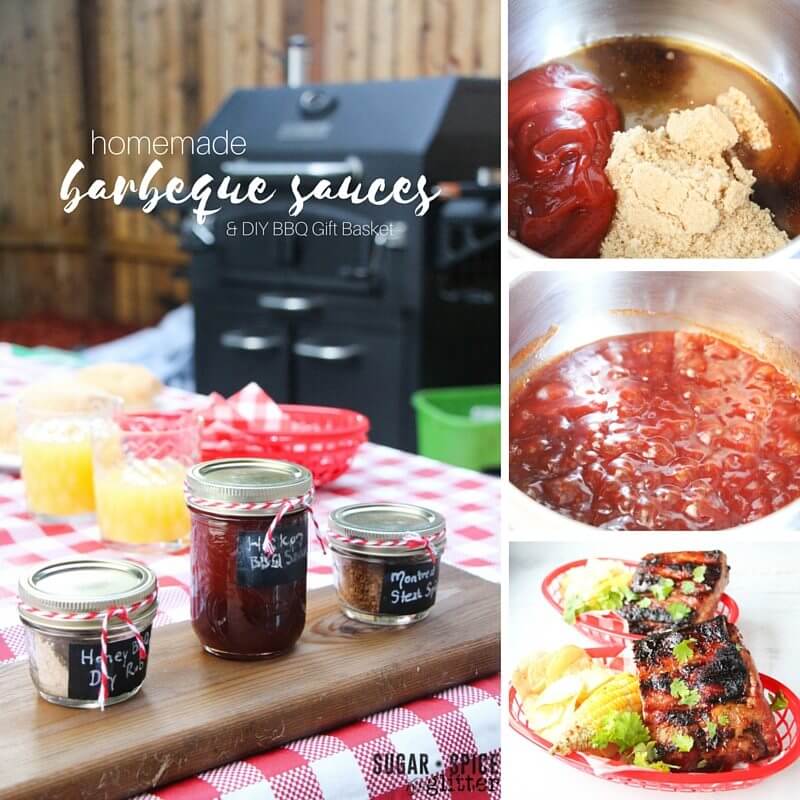 For his gift basket, I intended to give him two sauces and two spice blends, but I used up all of the Apple Cider BBQ Sauce marinading the ribs. I included a copy of the recipes in his gift basket so he could re-make any that he really liked.

Combine the following ingredients in a saucepan over medium heat:

Stir constantly until sugar is dissolved, then reduce heat and allow to thicken for about 5 minutes. 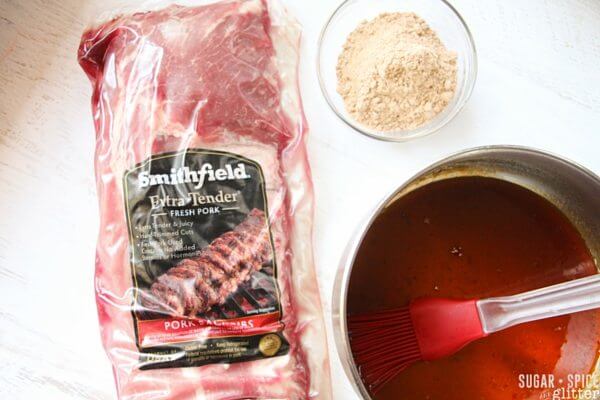 Combine the following ingredients in a saucepan over medium heat:

Heat until sugar is melted, then lower the heat to medium-low until the liquid has about halved in volume. This will concentrate the flavor for a great marinade or sauce.

Combine the following and store in an airtight container: 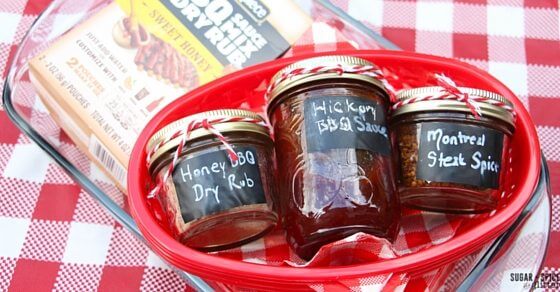 Okay, so this recipe is kind of a cheat – I used part of a pouch of the KC Masterpiece Sweet Honey Dry Rub to season one portion of the ribs, so I put the remainder of the pouch in a mason jar for later use.

What’s cool about this dry rub is that you can mix it with water, juice or beer to make a marinade instead of using it as a dry rub. 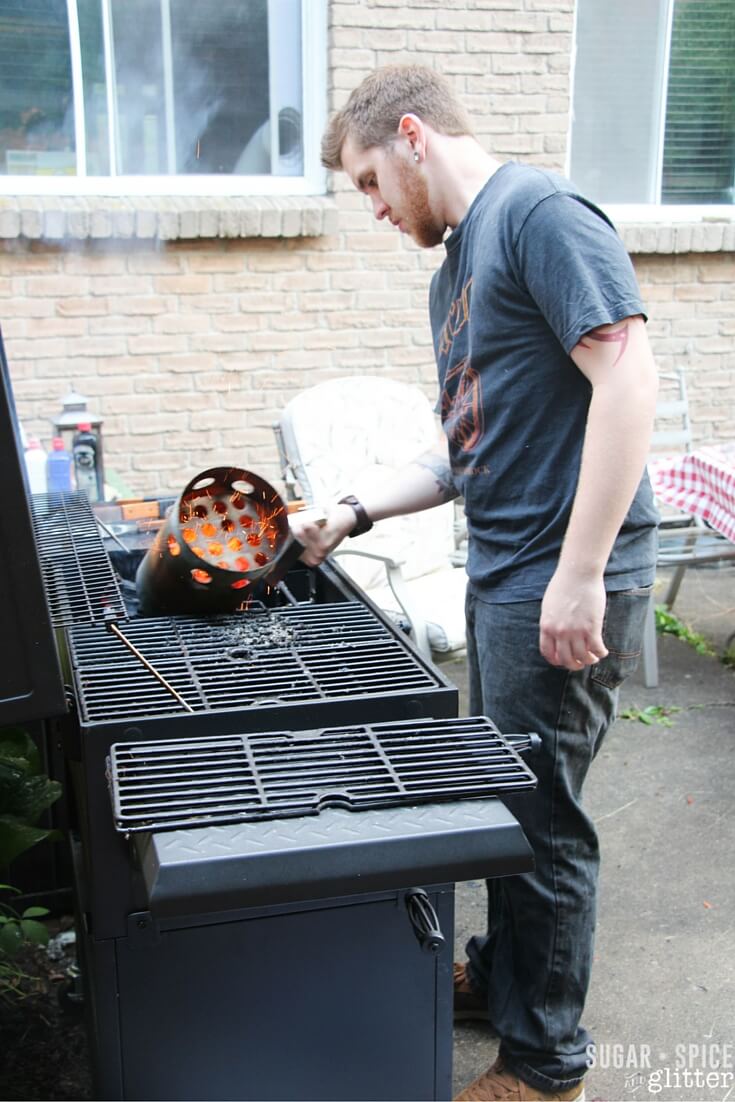 I’ve only used a grill a couple of times, and never a charcoal grill, so I asked my brother to go over the basics with me. I think a lot of women are intimidated by grilling (especially if you grew up around propane grills) but I was surprised at how simple and ritualistic the grilling process is. He gave me a few insider tips (like using the charcoal chimney you see above to speed up the heating of the charcoal) that I’m going to share with you soon!

It was really freeing to be able to cook supper outside and encourage the kids to play in the backyard, especially if your children are younger and require constant supervision – they can keep splashing in the kiddie pool and you can easily keep an eye on them while cooking. 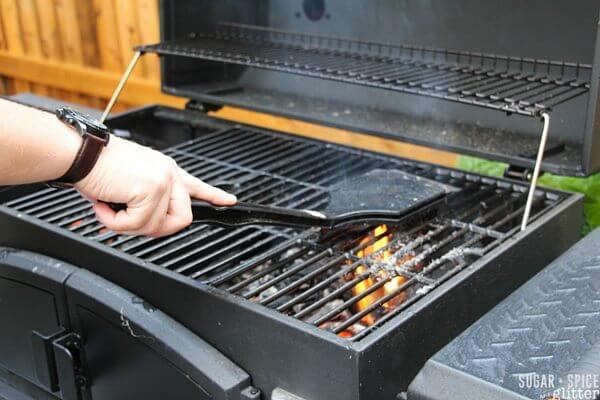 We made ribs, burgers, and I intended to serve my cilantro lime corn but my brother put the kibosh on that one. By placing the corn above the marinaded ribs, they took on a delicious smoky flavor and were able to go on at the same time as the meat without getting too charred. (And instead I just finished mine with lime juice and cilantro which worked just as well.) 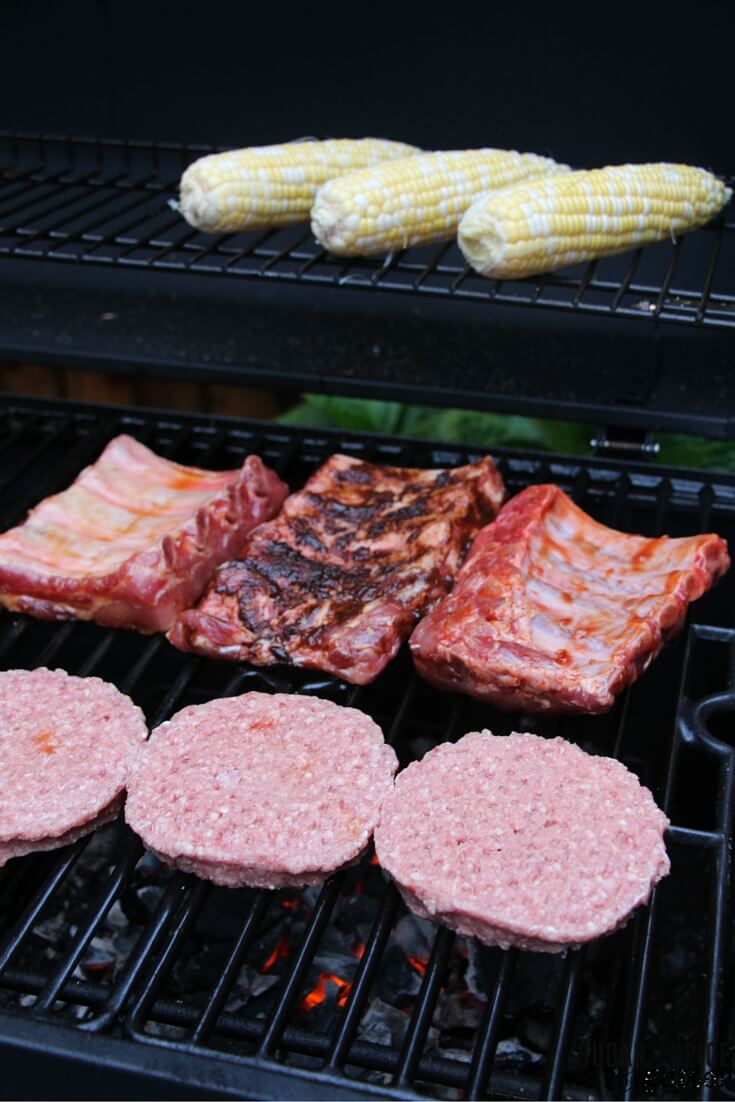 From left to right, the ribs had the Apple Cider BBQ Sauce, the KC Masterpiece Sweet Honey Dry Rub, and the Smoky Hickory BBQ Sauce: 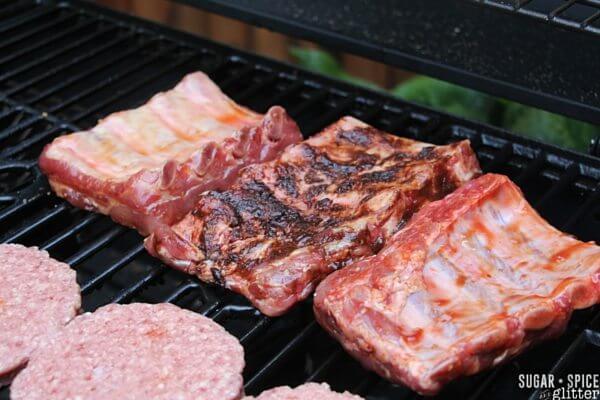 (And of course, my little chef insisted on helping in some aspect of the BBQ, so she helped prep the corn and line the BBQ baskets with those cute plaid napkins.) 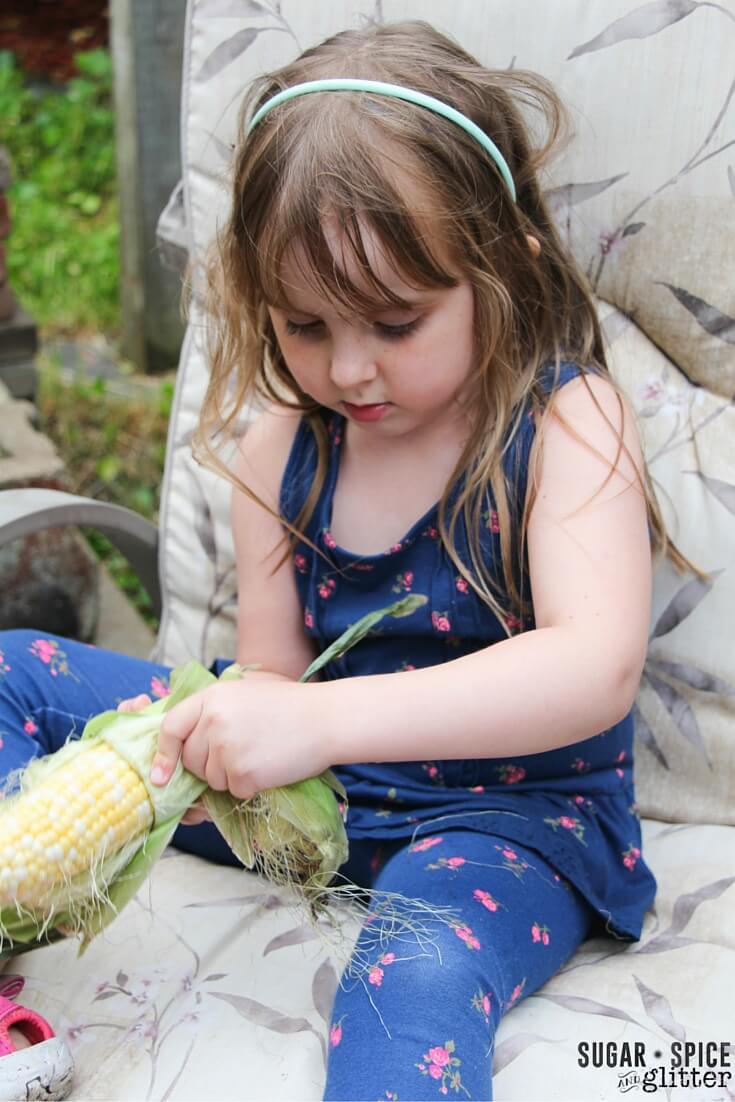 The ribs turned out delicious and it was fun being able to taste and compare the different homemade marinades and spices on the spot and for me it was really good to be able to see what my brother and Ella liked about certain aspects of each sauce so I could customize them for next time.

The BBQ gift basket was really quick and simply to put together, while being a really thoughtful homemade gift if you’re attending any BBQs or housewarmings this summer. 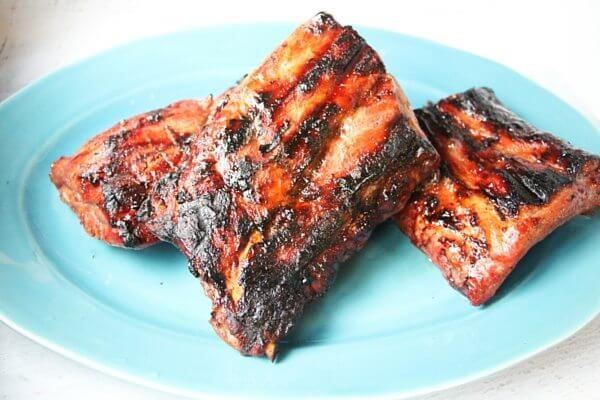 Do you have a favorite grilling recipe? Who does the grilling in your house?

Be sure to check out some of my other delicious summer recipes, like our No-Churn Blueberry Pie Ice Cream and Spicy Fish Tacos recipe. 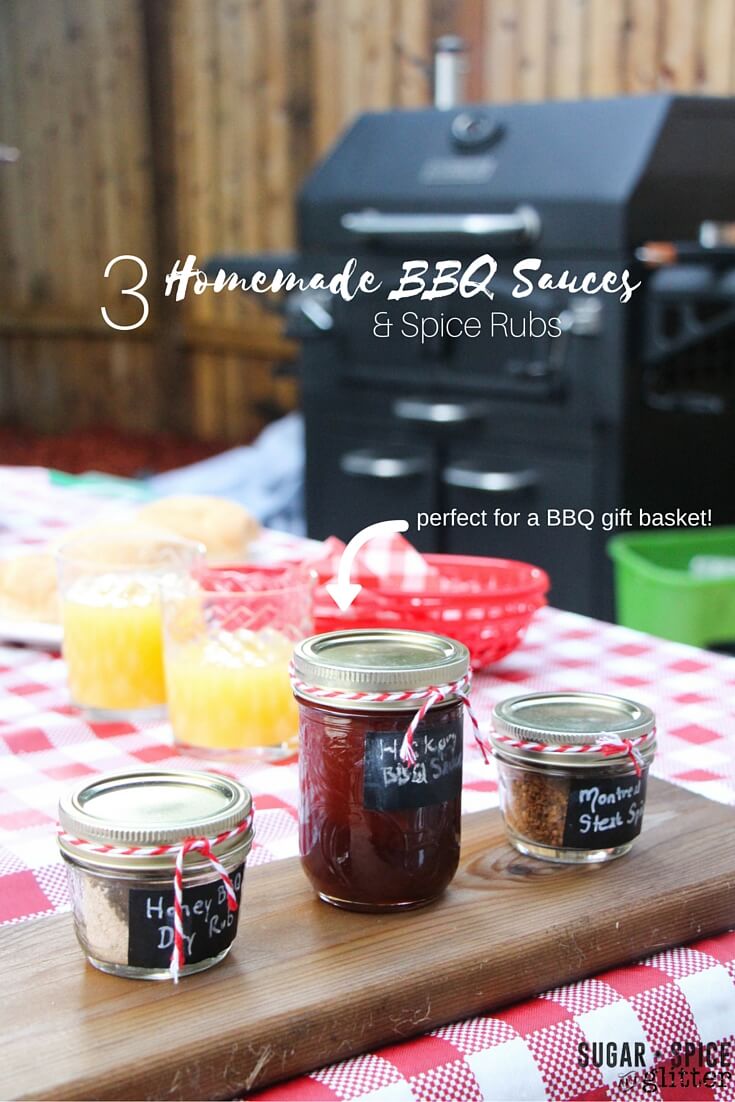