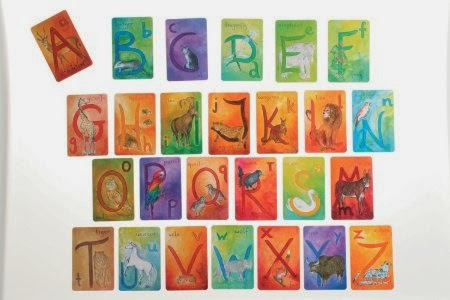 I love a lot of aspects of the Waldorf approach to reading, despite my choice to introduce reading readiness at an earlier age than most Waldorf advocates would suggest. I wanted to discuss the Waldorf approach, however, because it has some truly wonderful thoughts and could be a great resource for a reluctant or (by today’s standards) “late” readers.

Waldorf is based on Rudolf Steiner’s anthroposophy, which is very clear in its belief that the illiterate child is better able to observe the world and learn from one’s natural surroundings than literate beings; the preference being that a child’s learning be concrete in their sensory experiences rather than abstract, such as in the learning of symbolic language. However, literacy is not ignored, it is instead facilitated through singing, story-telling, reciting poems, finger plays, and similar activities, which sometimes get ignored in a modern rush for more identifiable reading activities.

Something else that the Waldorf approach to reading reminds us is that a child must be ready and desiring to read, and that there is a wide window of normal. Waldorf schools do not require students to be “reading” until the end of grade 3, or 7-9 years old. This may seem shockingly late for many of us who are so used to a preternaturally early push for literacy, but this was considered normal only two generations ago, and is still normal in some (well-educated) countries.

Waldorf — correctly, in my opinion — focuses on gross and fine motor skills well before advancing the child into reading. There is considerable neurological evidence to suggest that the brain is better able to learn how to read after several biological functions have occured which cannot be rushed by a well-meaning teacher. For example, the corpus callosum, which connects the left and right sides of the brain, is not formed until after pre-school, yet its underformation is often cited in studies on dyslexia. There is also considerable evidence that the development of gross motor skills can progress brain development.

The best and most readily available resource that I was able to find was Waldorf Reading for Homeschoolers by Barbara Dewey which is available through her website in both print and e-book download; the introduction was thought-provoking and she not only laid out some great activities and example lessons, she explained the reasoning behind the activities and addressed some expected objections, which I appreciated.

Interestingly, Dewey introduced me to the Waldorf approach of first introducing consonants that have a single sound (i.e., B, D, F), then consonants with alternate sounds (i.e., C, G, H), and then vowels (or “angel letters”). The letters are also introduced in pictures that either are presented to, or created by, the child. I’ve seen cute Grimms-style alphabet cards that can be used, but I hope to make my own. In the meantime, we have purchased Famke Zonnerveld’s Waldorf Alphabet Book, which combines a bit of I-Spy with the Waldorf letter pictures. The pictures should be used to also facilitate stories that feature those sounds.

An idea that I read or heard somewhere (please let me know if you know the source — I searched!) is to create stories that explain the formation or sound of the letters. For example, for K we tell a story about a King who is saluting, and a Cat who sometimes takes the King’s place when he wants to escape the palace. These stories are definitely better suited to an older learning reader.

What are your thoughts on the Waldorf approach to reading?