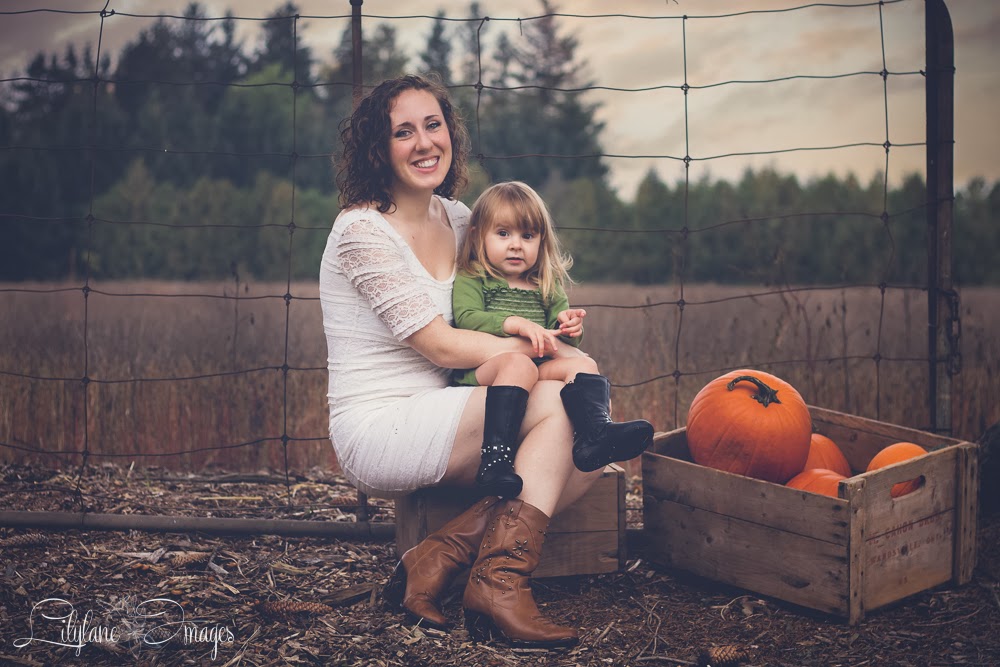 Last Friday, I posted Pumpkin Week, Part One, so please check that out if you are missed that!

Our pumpkin week was jam-packed, so I decided to split up the posts and really give adequate coverage to all of our activities.

You can’t have a pumpkin week without attempting some carving, and I thought pumpkin carving, or specifically, scooping out pumpkin “guts” would be the perfect messy invitation for Ella. 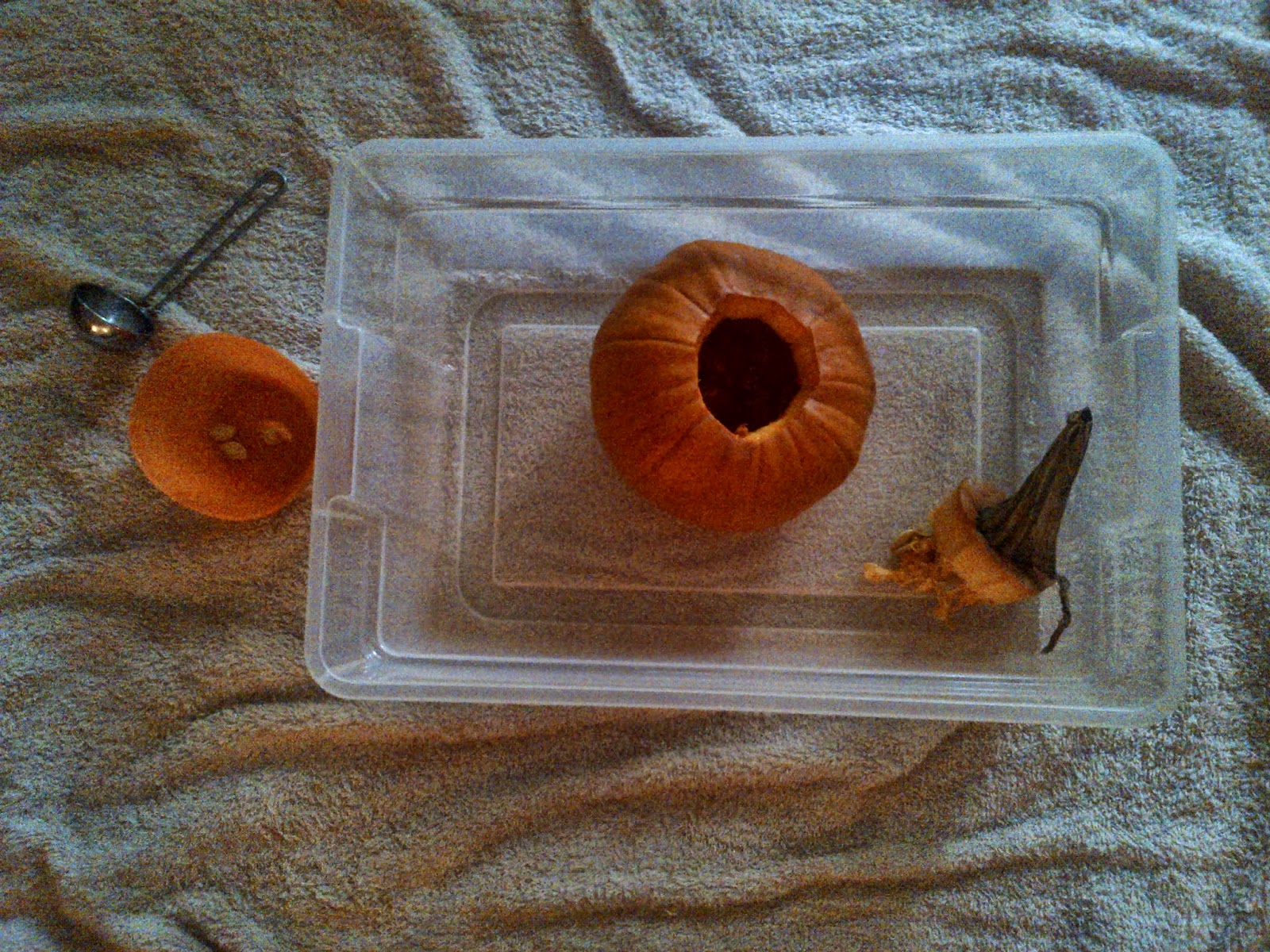 I initially created an invitation to have her scoop out pre-scraped seeds and flesh from one of our sugar pumpkins (its really hard to scrape the insides, even scooping is quite the effort). Ella was willing to look inside but was not interested in the work. I then attempted to encourage her to reach into a pumpkin and feel, but she was having no part in that. 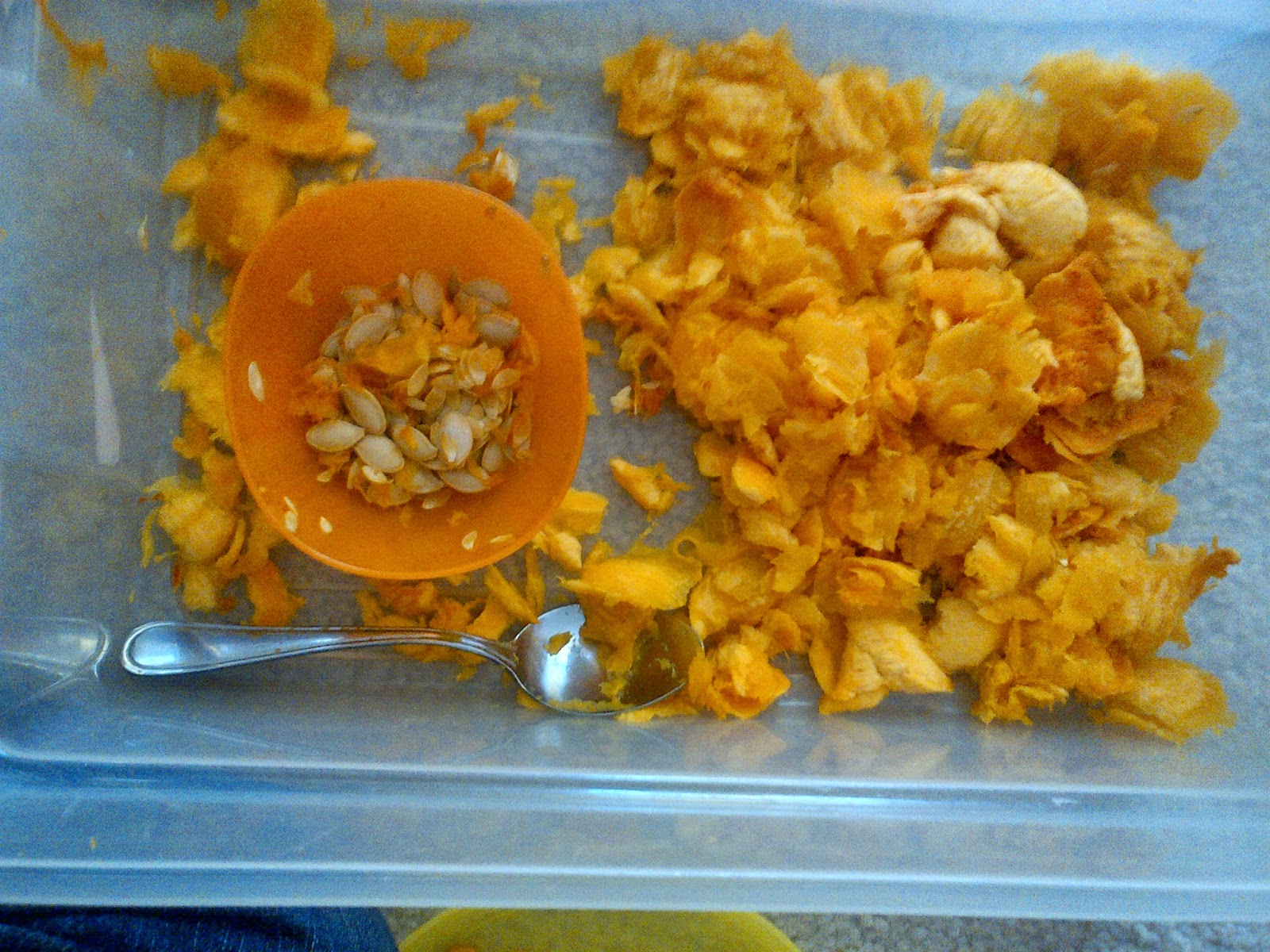 I then removed all of the insides myself, placed them in a container, and encouraged her to help me remove the pumpkin seeds from the flesh, so that we could roast them. Again, not interested in this work due to the “mess” factor. I removed them myself (due to the time-sensitive nature of this work), in her workspace, and then we roasted them together. (PS – best way to remove all of the stubborn pumpkin guts from seeds is to set them in a bowl of water for a few minutes.) Failed attempt at Practical Life, Sensory. 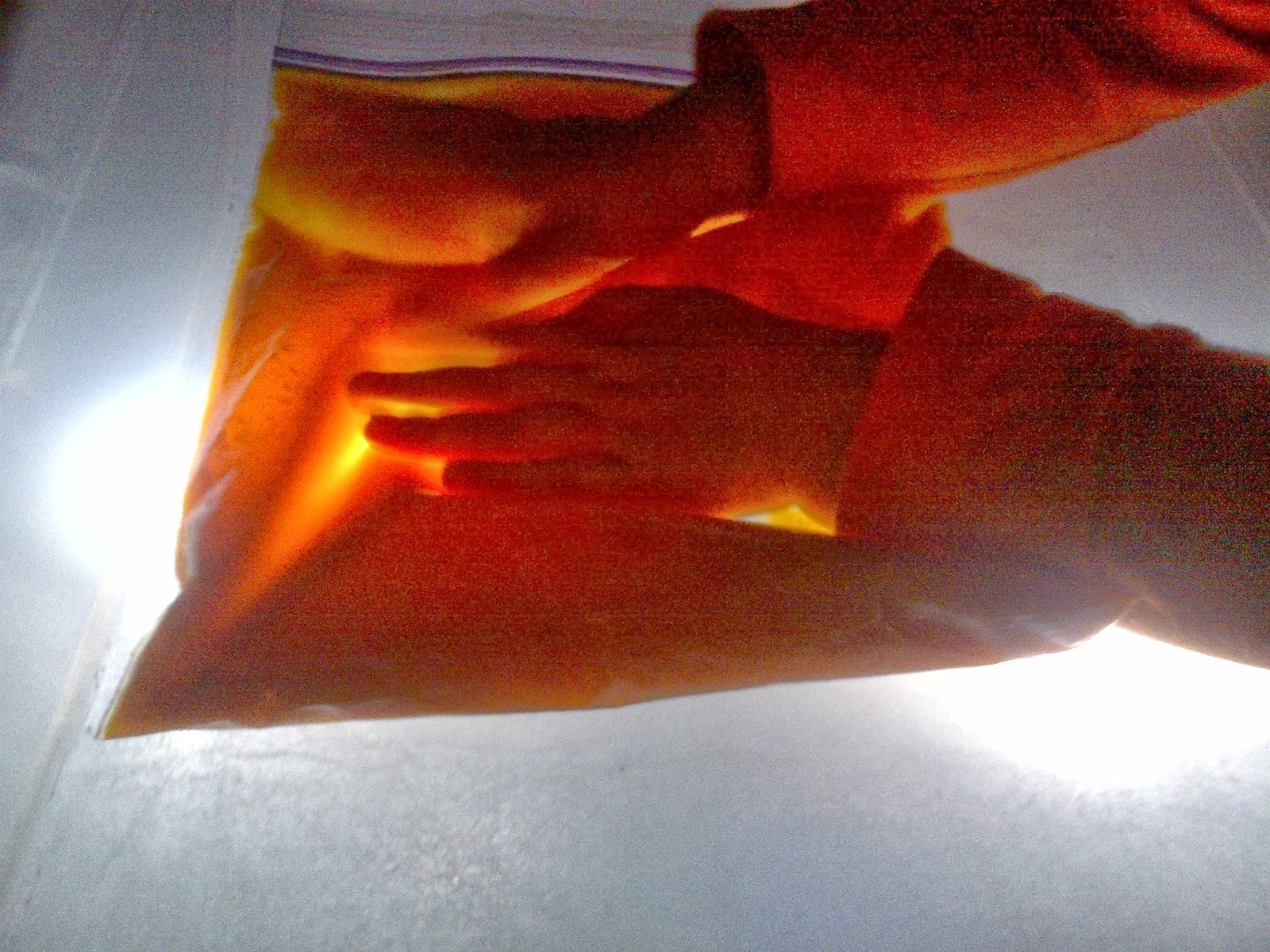 On a later pumpkin, I instead thought I could give her a “clean” messy exploration, by placing the insides in a Ziplock bag and attaching it to the light table. Once she had warmed up to the squishy factor, and had played with the different thickness and opaque effects of the light coming through the bag, I attempted to do some letter tracing, but our pulp was too liquidy. Language, letter recognition? sensory, science. 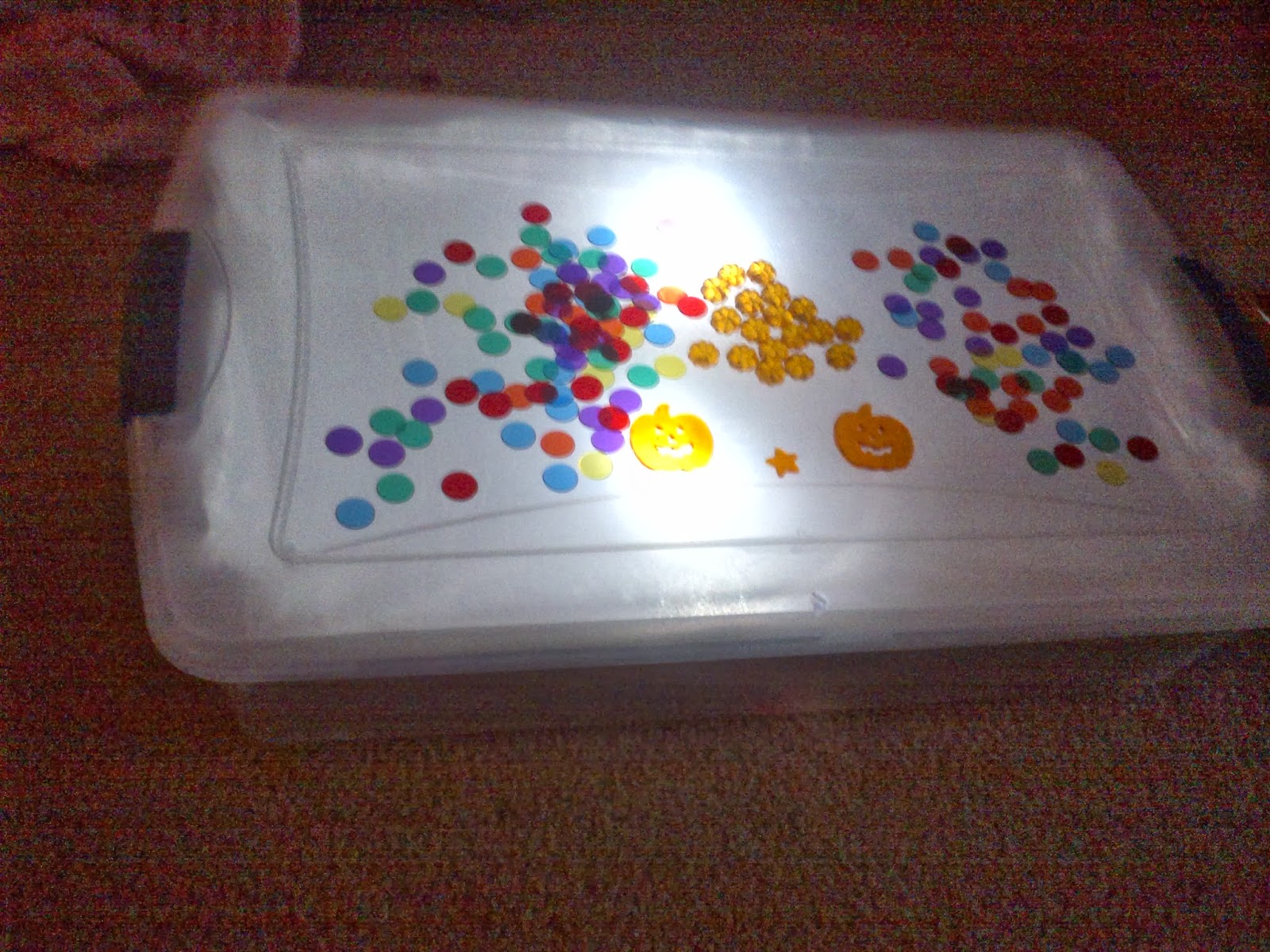 For our blue pumpkin, I set out foam geometric shapes from our Neutral Week, and had Ella make a “Jack O’Latern” face with the shapes, by using a glue stick to attach the pieces. (The blue pumpkin has a very thick flesh and I was planning on roasting it for soup, so I didn’t want to carve it.) Geometry, math.

Some of the leftover shapes we incorporated into our Pumpkin Spice Sensory Bath, along with the remaining styrofoam pumpkins and our orange bath crayon. I provided a pitcher of food dye-orange water that was spiked with some pumpkin spice. (I have started using Kool-aid as a ready-made, scented bath dye, but they don’t make a pumpkin Kool-aid… that I know of.) Ella also insisted that some of her real pumpkins join, and I insisted that we keep it to one pumpkin in the bath. Sensory.

In addition to our usual outdoor time, we visited three pumpkin patches! We also planted some pumpkin seeds in our container garden, though I think we should have done this earlier in the season. Ella is responsible for watering and checking for growth of our “pumpkin patch.” Gross motor, nature study, care of environment. 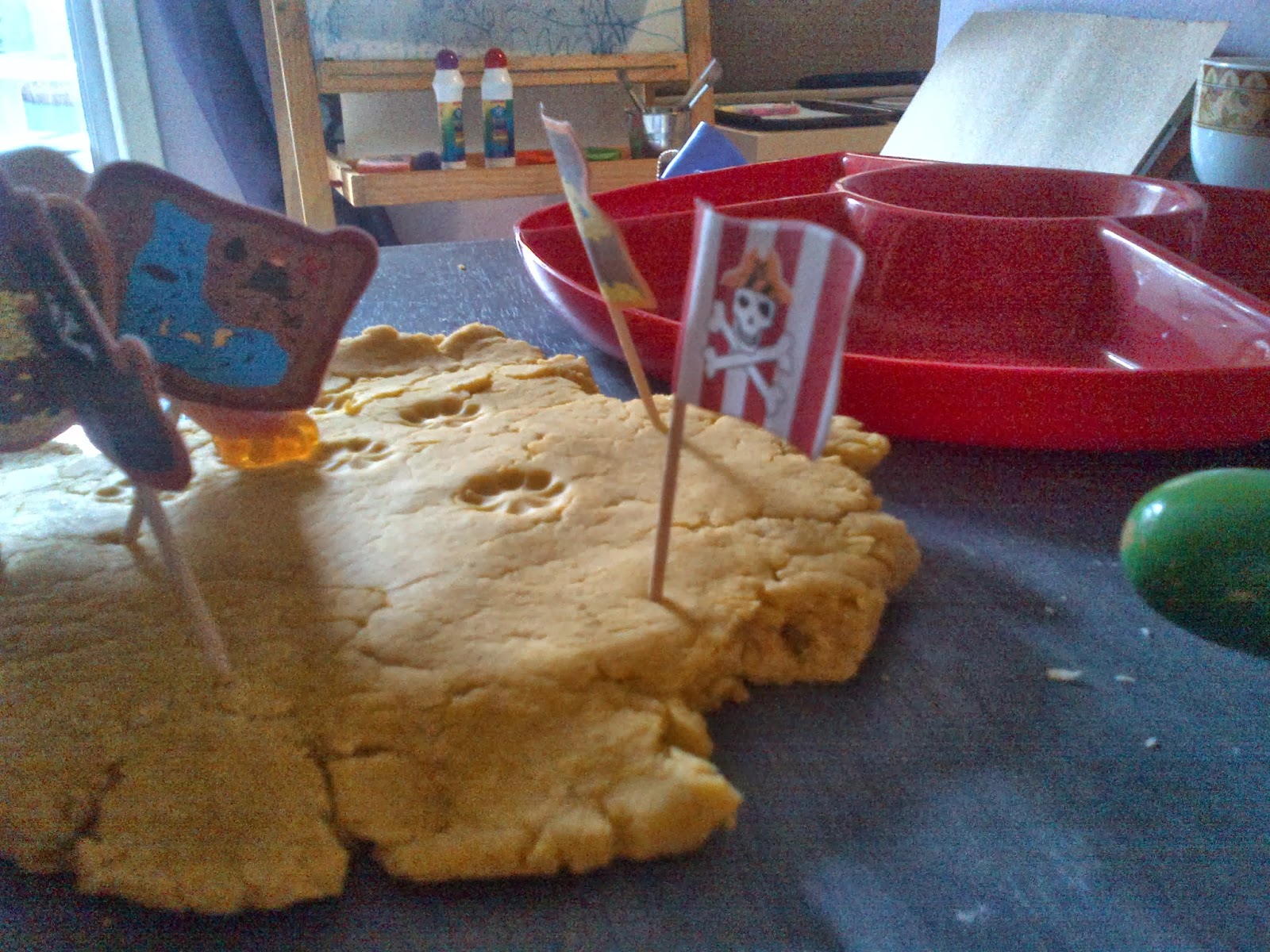 I experimented and made some Pumpkin Spice Play Dough, which we incorporated loose parts play into for the first time. I set the scented play dough out with some pirate-flag cupcake toppers, the acrylic pumpkins, some spices (whole nutmeg, cinnamon sticks, and cloves), and pumpkin seeds, and much of our exploration was based on the impressions that the various items left on our dough. Sensory, math – patterning, language, fine motor. 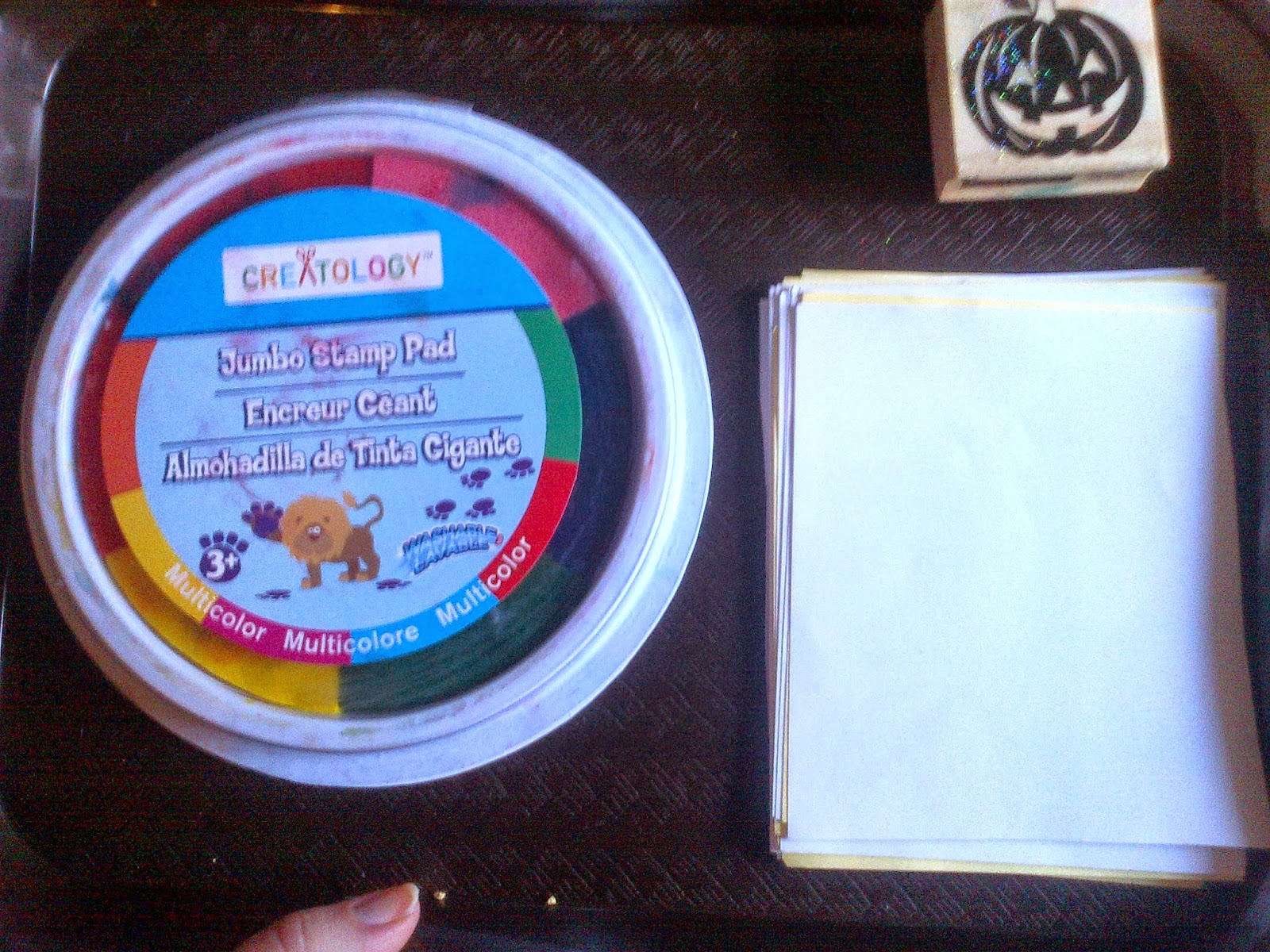 For art exploration, Ella had her first stamp invitation. This rainbow art pad was the only “washable” ink pad available at Michael’s, and I would definitely recommend shopping around for a single colour or DIYing a stamp pad, as this pad became a muddy mess after only one use, despite my encouragements to either stick to one colour or clean the stamp off between colour switches. This was surprising for me, as Ella is good for cleaning off or keeping her paint brushes separate, so I expected that to translate to keeping the stamp pad colours separate. She’s gotten better with time, but once the stamp pad colours got messy, there was no recovery. Art exploration, fine motor. 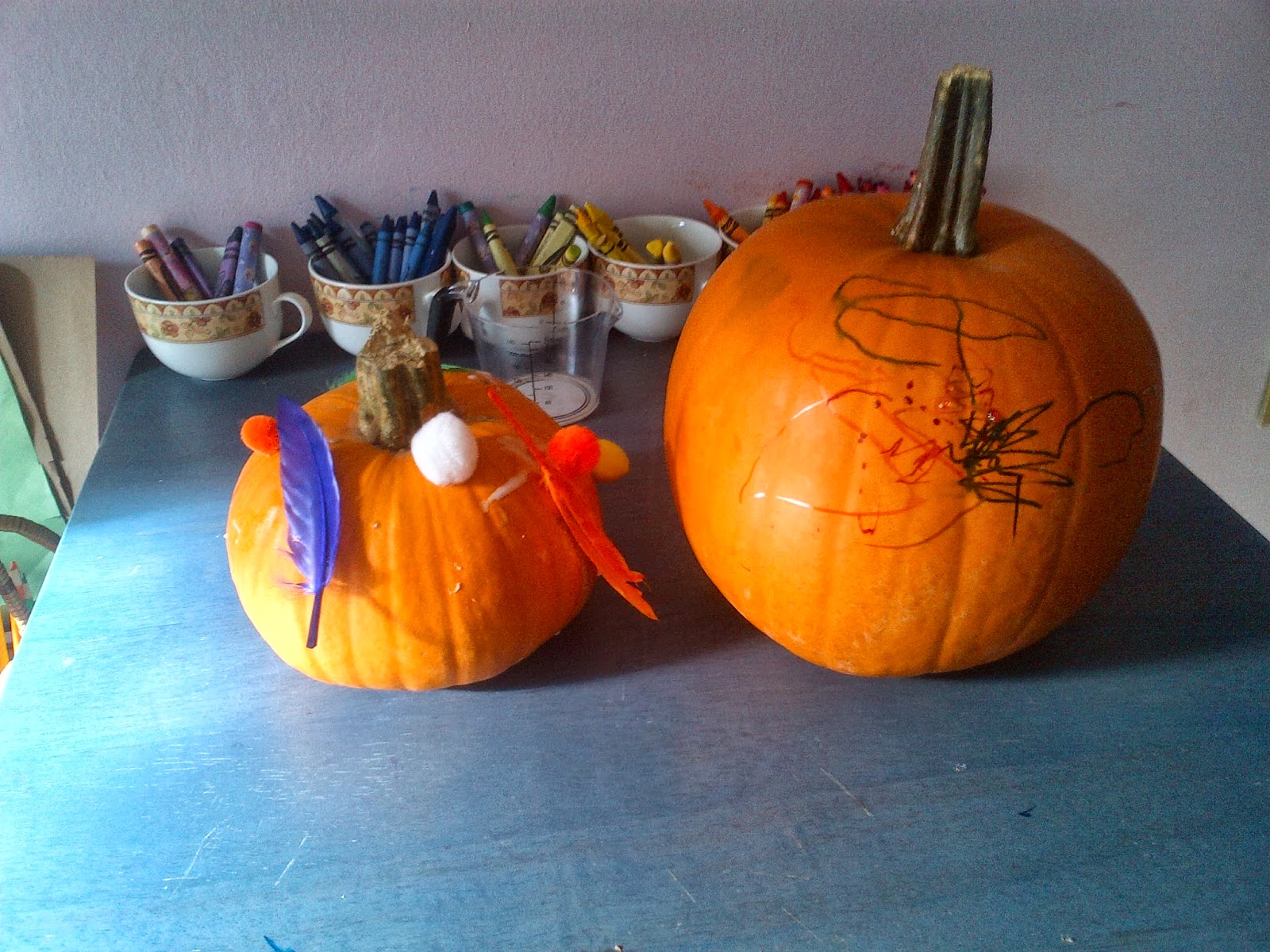 For the rest of our pumpkin-art exploration, we decorated our pumpkin collection in various ways. Painting, tracing patterns for Mama to carve, gluing various materials (pompoms, stickers, feathers, etc), and experimenting with washable markers and crayons. Art exploration, fine motor.

(For the rest of our art, we really loved on leaf exploration, and I didn’t want to procrastinate leaf art and miss out on all of the beautiful colours.)

For music, we learned “Five Little Pumpkins” (to the tune of “One Little Two Little Three Little Indians”) but Ella insisted that we change it to “Three Little Pumpkins” to reflect our home’s dwindling number of pumpkins. (This could also be a fun opportunity to make Native American crafts with older children, such as gourd rattles.) We also started reading our Hallowe’en books (look forward to some reviews).

Ella has become obsessed with all things Pumpkin Spiced! (This is a nice change from last year, when she refused to eat anything derived from her “pet punkin”…) While on our big shopping trip last month, we purchased pumpkin-spiced marshmallows, pudding, and candy melts on a whim, and she enjoyed helping prepare (and eat) all of the items. Although enjoyable, I’m thankful that those products aren’t available where we live, so Ella has happily replaced those items with slightly healthier alternatives, including the Pumpkin Pie Pudding from the just-released Puddin’ cookbook, and Fun at Home with Kid’s Low Sugar Whole Wheat Pumpkin Muffins (only we substituted coconut oil for the vegetable oil and increased the cinnamon and spice). If you are less concerned about sugar consumption, Brown Eyed Baker has a great Pumpkin Cupcake recipe that I almost exclusively ate to myself (we didn’t ice ours). We also roasted pumpkin seeds, made pumpkin scones and pumpkin gingersnap cookies, and created our own pumpkin soup recipe. (We still have a few more pumpkins to cook through, so if we do anything exciting, like Pumpkin Mac n’Cheese, I’ll let you know!) We also enjoyed David’s Pumpkin Chai tea, which had super cute pumpkin sprinkles mixed into the loose tea (Ella’s was made with milk and very diluted tea.) Practical life, math.

Ella’s full-on love for Pumpkin Spice encouraged me to make one final attempt at messy play this week with Allison’s Pumpkin Spice Oobleck recipe, though I used very little coffee (just enough to give it a coffee scent, and then just hot water) because caffeine can be absorbed via skin contact and Ella has shown caffeine sensitivity. 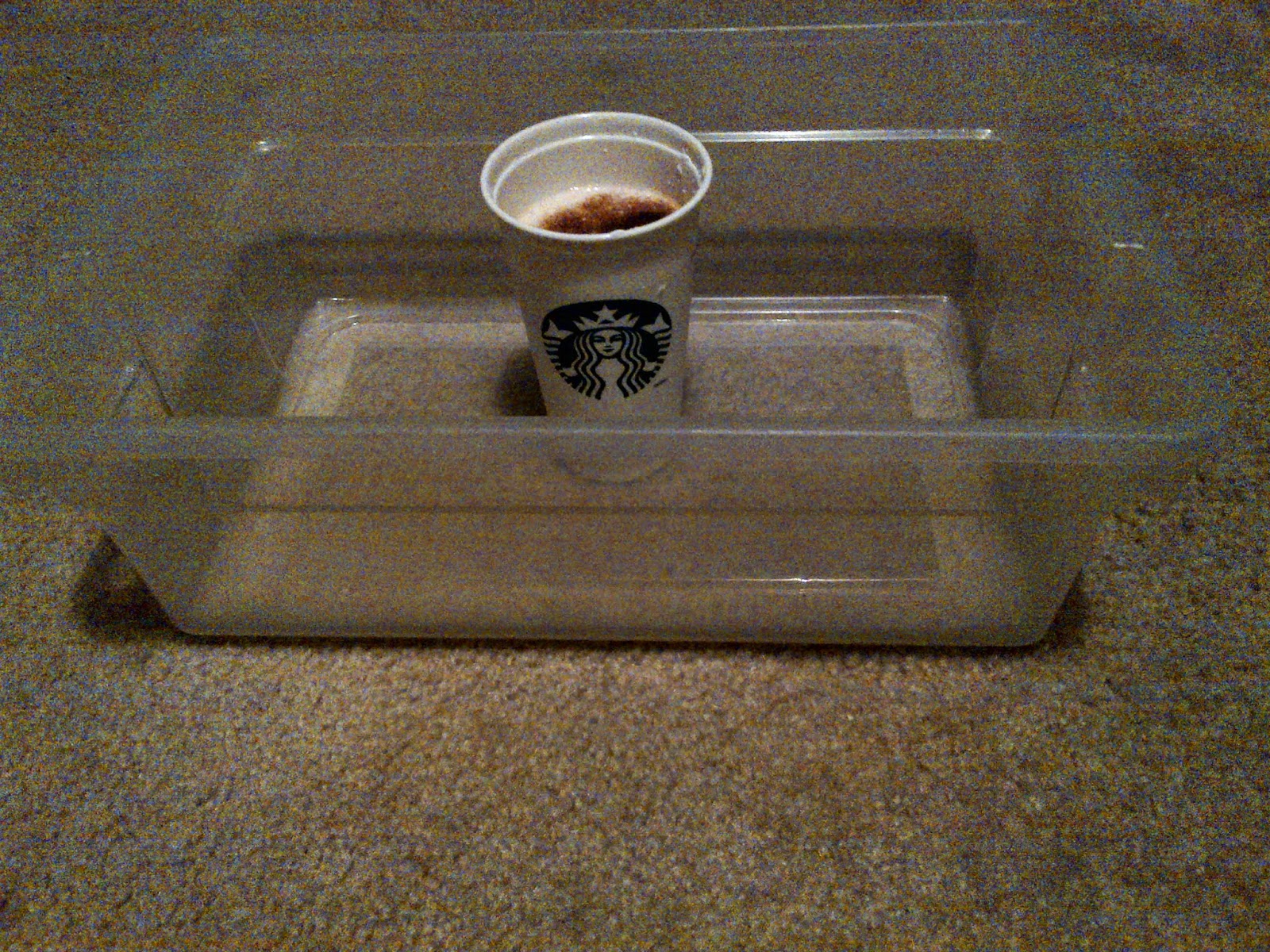 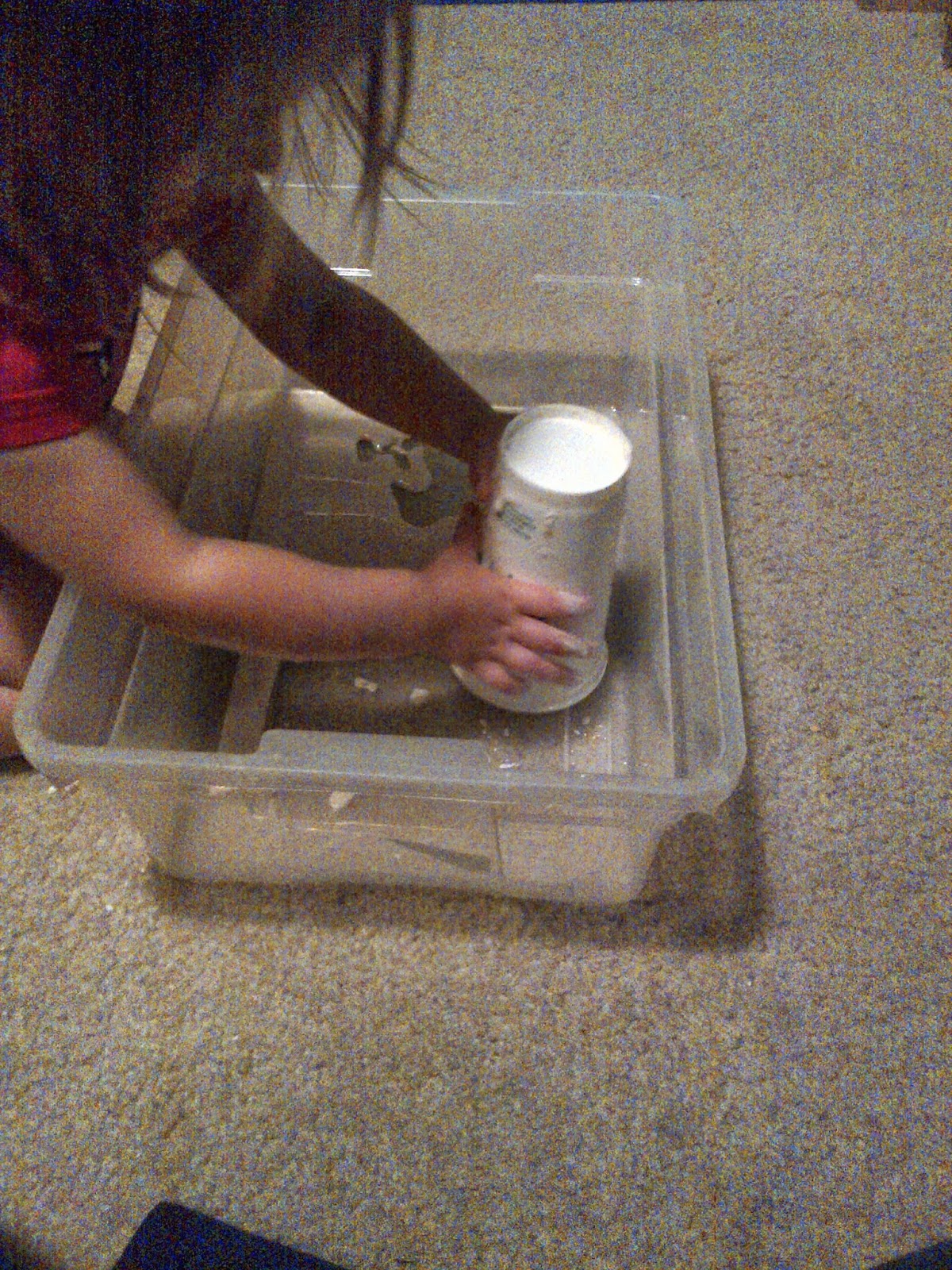 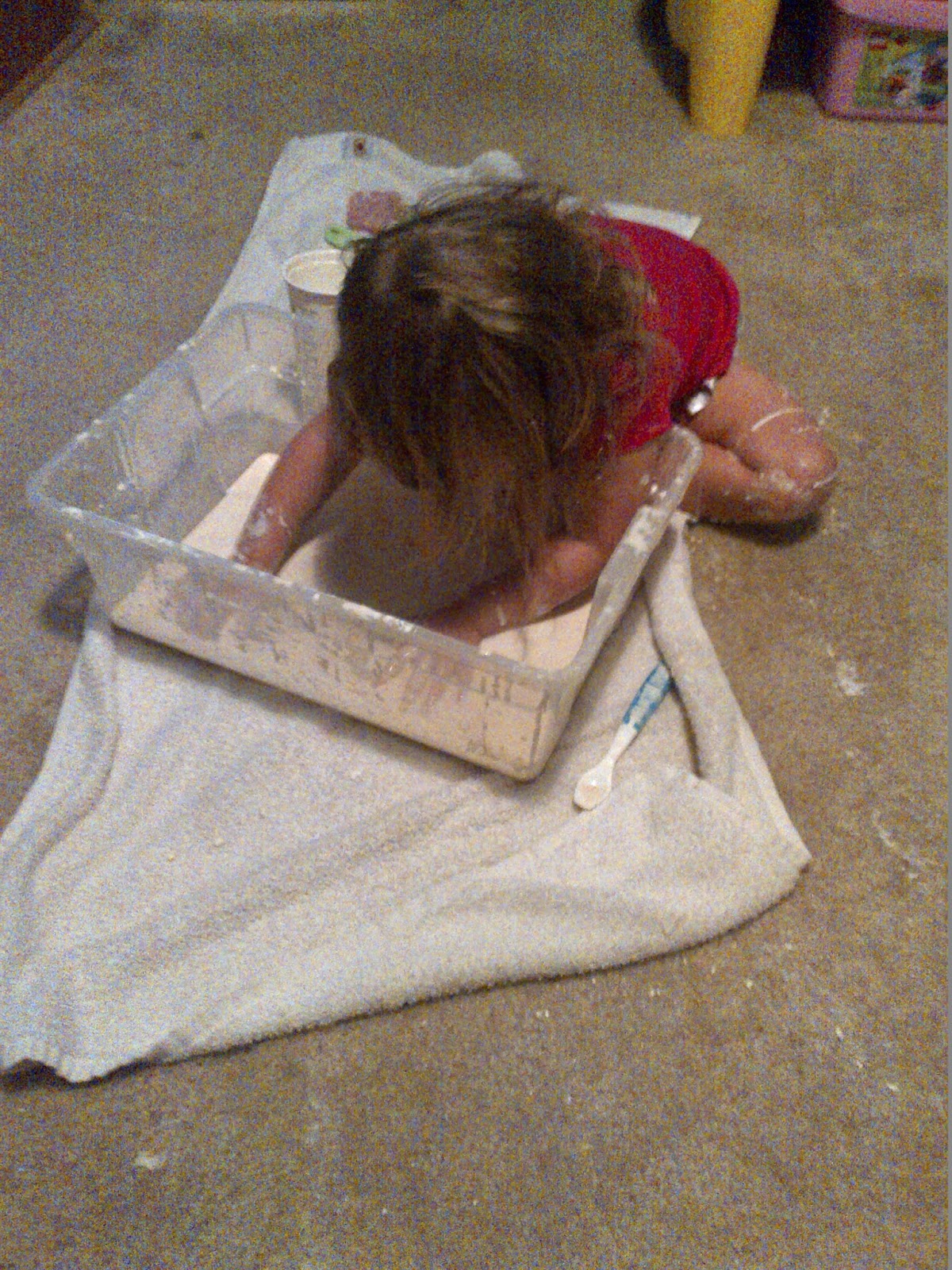 (This was a very early-morning exploration so sorry for the poor quality pictures.)

We had never played with oobleck (or goop, as some call it) and I can honestly say that I have never read a description that can do it justice — because it truly is indescribable! It performs as both a liquid and a solid, depending on how you manipulate the oobleck, and it doesn’t stick to hands like other messy materials, and once it dries it can be easily brushed off of any fabric or carpet that it touches. Ella engaged with this activity for at least 40 minutes, and kept returning to it throughout the day until it became too stiff to work with. We will be definitely be revisiting oobleck again!

Even though Pumpkin Week is officially over, the pumpkin love lives on. Our train table is still covered in pumpkins, squashes, and gourds, but we need to move on to apple week — apples aren’t nearly as patient as pumpkins! 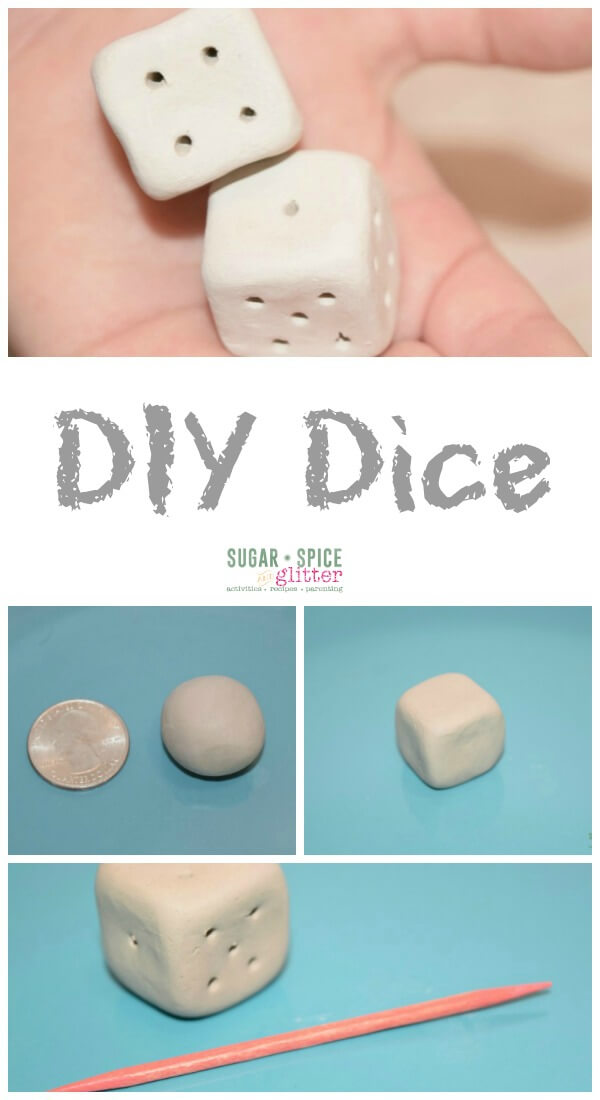 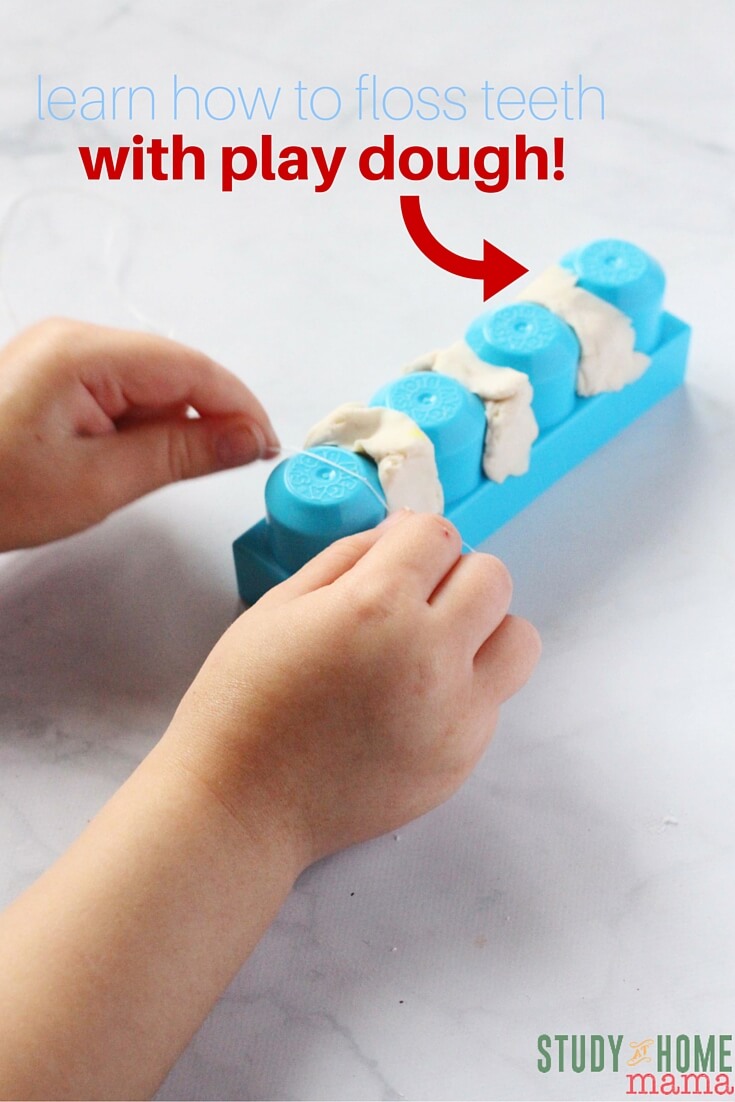