If you’re planning a family vacation to NYC, these 15 BEST NYC Ice Cream Shops are sure to keep you and your family cool and happy, from unique ice cream flavors and presentations to frozen treats that give ice cream a run for it’s money.

When Ella and I are fortunate enough to travel for a week or more in a specific city (or visit a city for the second time) we love to do little challenges, like make a giant list of the most recommended ice cream shops and try to hit as many as we can!

This NYC Ice Cream Challenge gives you 10 locations to hit and try a variety of frozen treats – gelato, frozen hot chocolate, rolled ice cream, and more. (Plus 7 “honorable mentions” worth checking out.)

We visited NYC in July, which was an exercise in humidity. Ice cream was much-needed and we found several amazing locations to pass on to you!

NYC is a unique city in that a business can’t really survive on a bad product. Even celebrity-backed businesses fold in this high-rent, high-competition environment, so I’d be curious to know if there is such a thing as a bad ice cream shop in NYC. We definitely tasted a few lackluster ice creams which didn’t make the list, but these 10 (plus 5 honorable mentions) are definitely worth the trip!

(PS – it’s NYC, so I think it goes without saying that these ice creams are each going to run you about $5-7 each. That’s how much a scoop costs at the nice places in my town, too!) 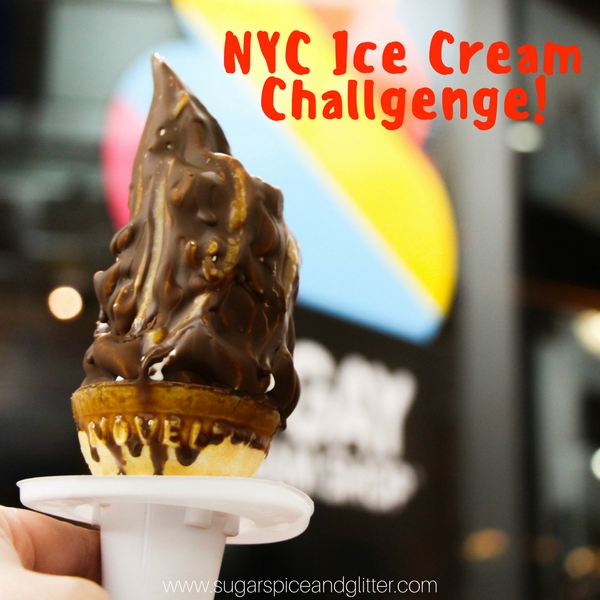 This one gets top billing because not only was it my favorite ice cream of the trip, I’m also super impressed with how thorough they are – even pasteurizing their milk in-house.

We had the Ooey Gooey Butter Cake which was voted the Best Ice Cream in NYC – and with Ample Hills also being the Zagat’s #1 Ice Cream Shop, you know you’re in good hands.

I’ve read complaints about lines before going but the Gotham West Market shop was a ghost town when we stopped by on a hot afternoon, and it had plenty of air conditioned seating and also a cute area out front.

If you’re doing that location, I would stop by Chelsea Market first for lunch (and buy a black and white cookie from Amy’s for later), and then stroll over here for dessert. Or, they have a location now on the Highline so you can stroll the gardens with ice cream in hand. The other three locations are in Brooklyn.

(PS – if you’re a Disney family like us, Ample Hills just opened up a location on the Boardwalk!) 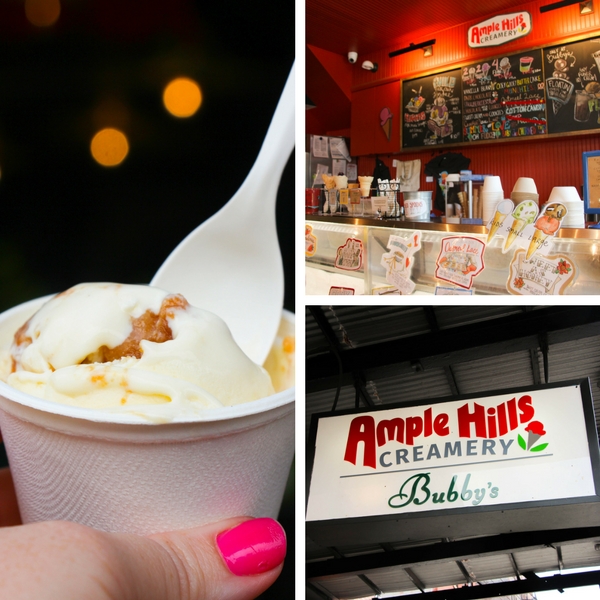 A Thai-inspired ice cream shop, this new chain brings hand-rolled ice cream to the streets of NYC. I’m lucky enough to have a similar shop in my city, but if you haven’t had these crepe-like rolls of ice cream, you’re missing out! The special technique of creating the ice cream eliminates the need for additional fat and emulsifiers so you get a creamier, smoother ice cream.

They create your ice cream from scratch right in front of you, combining your chosen flavors and mix-ins with cream and chill it on a special frozen surface, then scrape and roll it into cute ice cream rolls. Do expect a long wait since they are making each ice cream as it’s ordered.

Check out their flavors here. 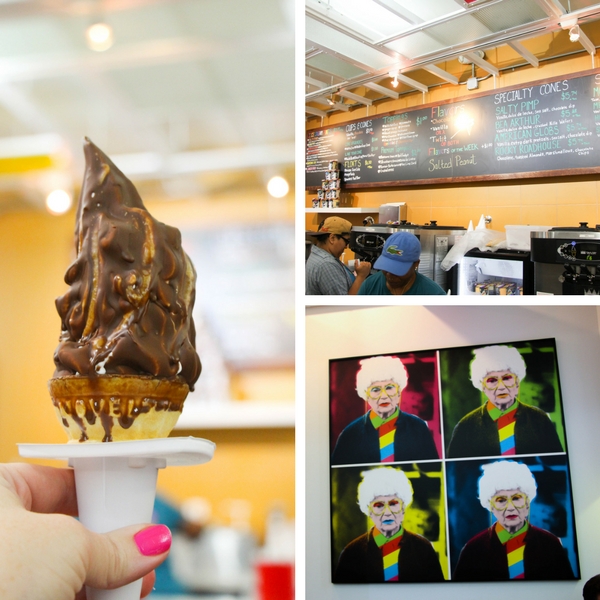 To say my daughter is obsessed with Anthony Bourdain would be putting it mildly (Jamie Oliver is the other chef d’obsession), so anytime we go to a city that he’s had an episode for, we try to hit up as many of his recommendations as possible – and we made it to six on this trip!

We very nearly called off going here – we were stuffed from Takashi (a Japanese yukinuki restaurant that Bourdain counts among his favorites) and it was getting late, but my little chef begged to please still go for Bourdain’s recommended cone.

The soft serve “Salty Pimp” cone that we shared at Big Gay Ice Cream was totally worth the 20-30 minute wait in line… and I got to have most of it because someone fell asleep right after having a few satisfying bites. It’s a delicious and creamy soft serve vanilla with streams of salted caramel encapsulated by hard shell chocolate, and every once in a while you get a big flake of salt that just sets off a flavor explosion. Ah-mazing. 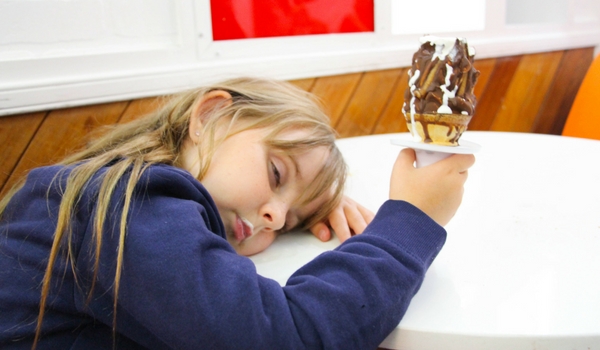 An Upper East Side landmark, the Lexington Candy Shop & Luncheonette is just 3 quick blocks from Museum Mile. It’s milkshake was voted the Best in NY but we went here for the legendary egg cream, which is basically the original soda float – sans the ice cream.

(They also serve traditional diner food but we were heading to Papaya King for hot dogs, so we just had dessert here.) 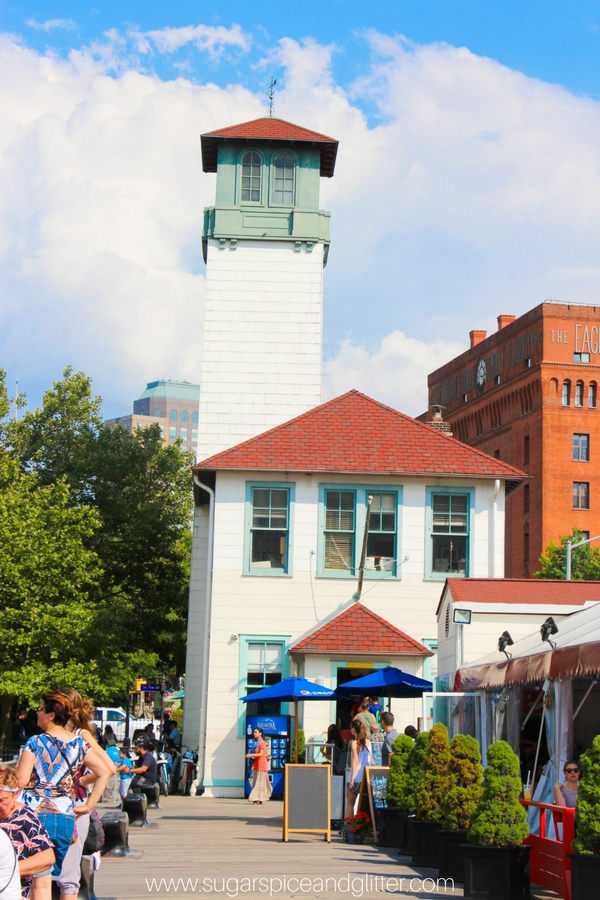 Scenically located in a converted firehouse just under the Brooklyn bridge on the Fulton Ferry dock, adjacent to the Jane Carousel, Brooklyn Ice Cream Shop only offers a few (traditional) flavors but they do those flavors justice! (They also have coffee and pastries in the cooler months.)

It’s cash only and there’s always a long but fast moving line, so don’t forget to bring cash or hit the ATM first.

There’s plenty of bench seating on the dock, so grab a cone, sit and watch the boats on the Hudson River, then take the kids on the merry-go-round or the nearby playground to run off that sugar. 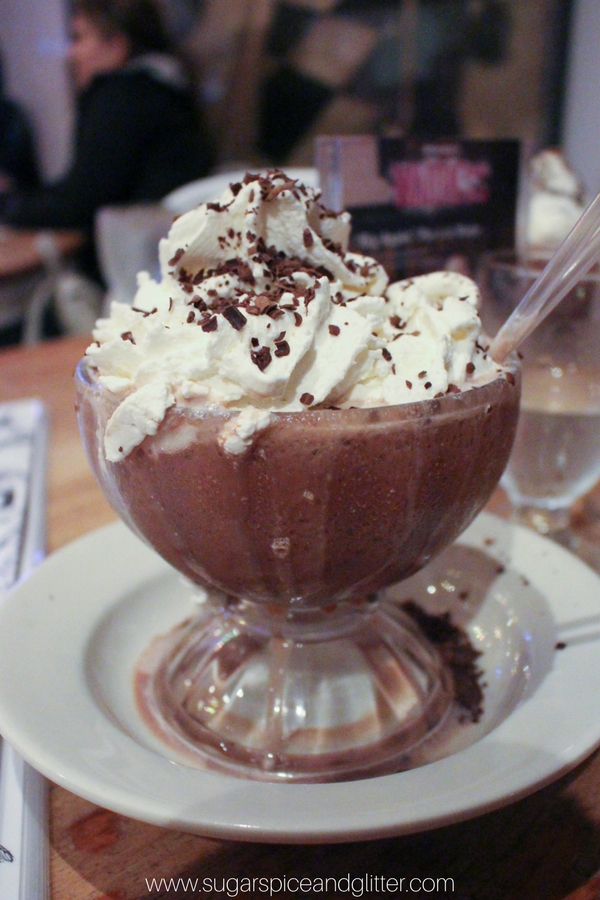 There are a ton of sundaes here, but Serendipity makes the list for its famous Frozen Hot Chocolate. I was honestly prepared to be let down by this frozen concoction, it was almost too built up before we got there, but it delivered! I would almost describe it as icy, sweetened chocolate milk but it was somehow also rich.

Keep in mind that there is a minimum charge of $8 per person. My daughter and I split the Frozen Hot Chocolate and a chocolate fondue which came to $28 (enough to cover 3 minimums). There’s a lot of people grumbling about the minimum charge and the expensive menu on review sites but my opinion is that this is an in-demand location and they probably experienced a good number of people coming and splitting one dish, or sitting around while their friend had a meal, so they had to put some rules in place.

Personally, I was unsure that my 6 year old daughter would even want to eat (because we had an unexpectedly huge supper) and I was assured they wouldn’t charge for her age. We had to wait a reasonable amount of time for our table and were placed at a table big enough for a much larger party – a lot of restaurants make you wait for the exact table size you require so they don’t “lose money” putting you at a table they can make more money seating a bigger party at. My only complaint was that my server was not attentive – with long waits to place our order, request our bill and then get to-go boxes for the leftover fruit (and this was late at night on a Thursday – so not prime time).

A low-key airstream trailer parked outside of a hotel serving up delicious waffle fries, burgers and dipped cones!

But these aren’t your ordinary vanilla chocolate-dipped cones like you can get at DQ – we’re talking gourmet flavors and unique dips and garnishes – like a strawberry dip with a fresh strawberry perched on top, or the Hawaii 5-O with a pineapple dip, pineapple-basil jam, toasted coconut, cherry and a mini parasol – and the flavors change all of the time. 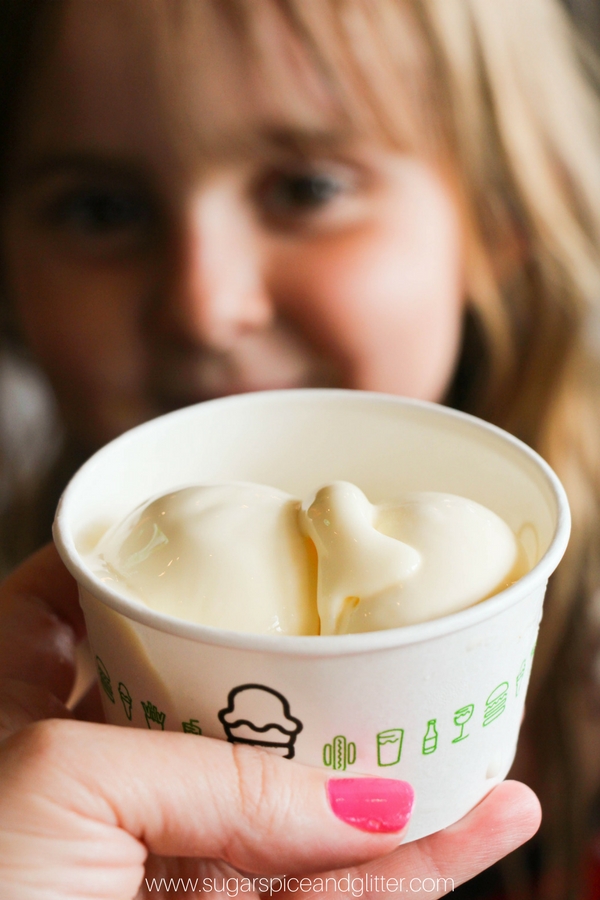 The frozen custard here is the one that got my daughter officially hooked. Vanilla and chocolate flavors made with real sugar and hormone-free milk, this frozen custard is thick, creamy and rich with just the right balance of egg:cream flavor.

Some locations have specialty sundaes, as well (Theatre District, Battery Park City, Brooklyn, and Westport) so keep an eye out for those. 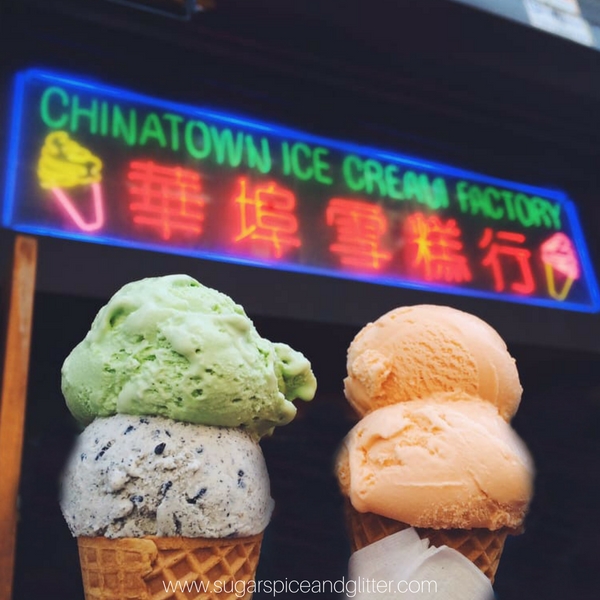 I don’t think I’ve ever had such a hard time picking out an ice cream flavor as I did at the Original Chinatown Ice Cream Factory – absolutely everything sounded unique and delicious! She ended up ordering lychee and mango, so I ended up helping her eat hers – but the almond cookie and black sesame that I tried were delicious. (The black sesame ice cream was nutty and had that bittersweet taste that a good dark chocolate has – but with a savory edge. It was unlike anything I had ever tried before.)

The staff was really friendly – even sneaking my daughter extra samples after I tried to cut her off so that we weren’t taking too many. I also enjoyed the tongue-in-cheek way they referenced their normal flavors vs the exotic flavors on their menu (check out their menu to see). It was a great conversation starter with my daughter about perspective.

Cash only and there’s no seating.

I am kicking myself that I didn’t know about this place before our visit because it sounds AMAZING!

See the full menu here, and order for delivery here.

Sprinkles – If you don’t have a Sprinkles cupcake location near you, it’s a must-try (my daughter always gets a kick out of their Cupcake ATM), but the ice cream sundaes that combine the stellar cupcakes with homemade ice cream are a must-do. (They also have this at Disney Springs now so it’s become part of our Disney traditions.)

Maman – I really liked the PB&J flavor here, but it was too much for my friend and my daughter. I was really excited for the basil chip ice cream, which served as a nice palate cleanser but was not enjoyable as a scoop.

Ice & Vice – Another location we didn’t get to check out, but it sounds just good enough to be added to the honorable mentions (until we get a chance to scope it out for ourselves). 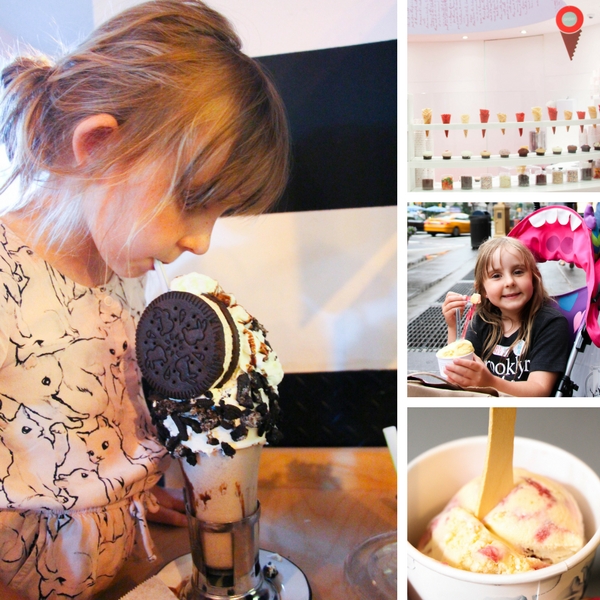 Black Tap – home of the freak shake, if you’re okay with waiting in line for up to an hour this is a cool burger joint with crazy milkshakes.. plan to split it!

Emack and Bolio’s – I didn’t include this in the main list because the chain started in Boston, but it has delicious ice cream with crazy cones – and they are generous with the samples, so the kids can really take their time choosing. There is a location just 4 blocks away from the Museum of Natural History, and it’s right beside a delicious deli so you can grab a slice or a bagel before your cone.

Eataly Gelato – we didn’t do a lot of gelato on this trip, so I can’t say that this is the best, but it was pretty darn good gelato! Smooth and with intense flavor, it’s definitely worth stopping in for a scoop. 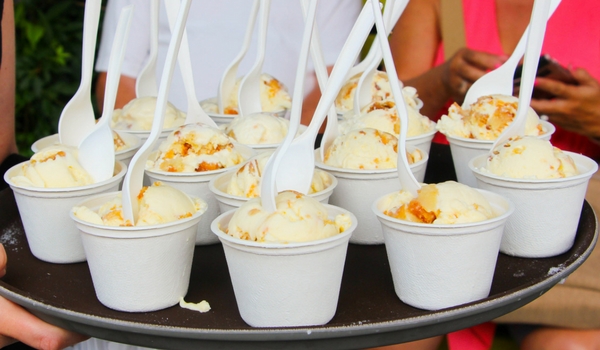 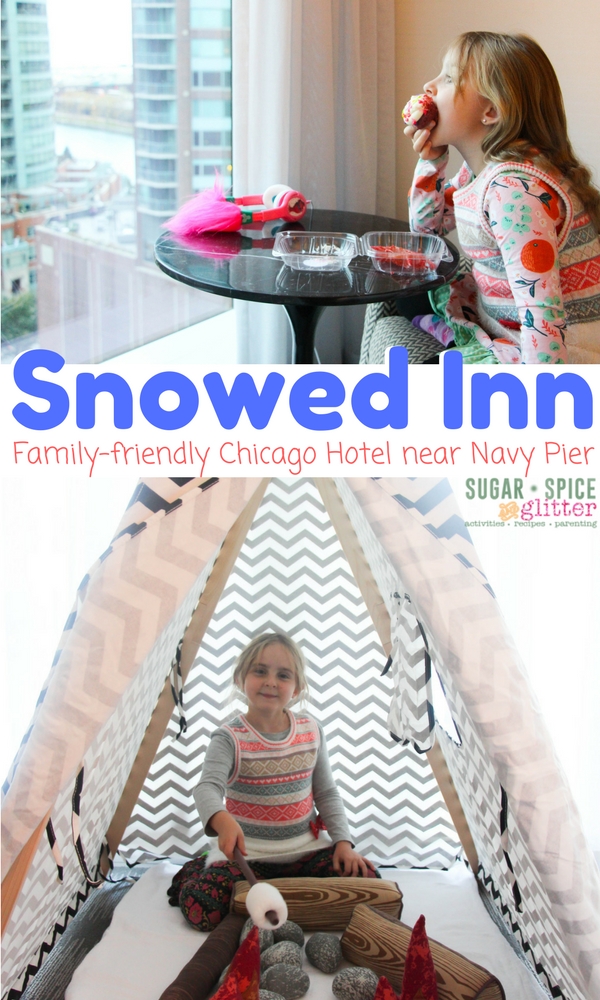 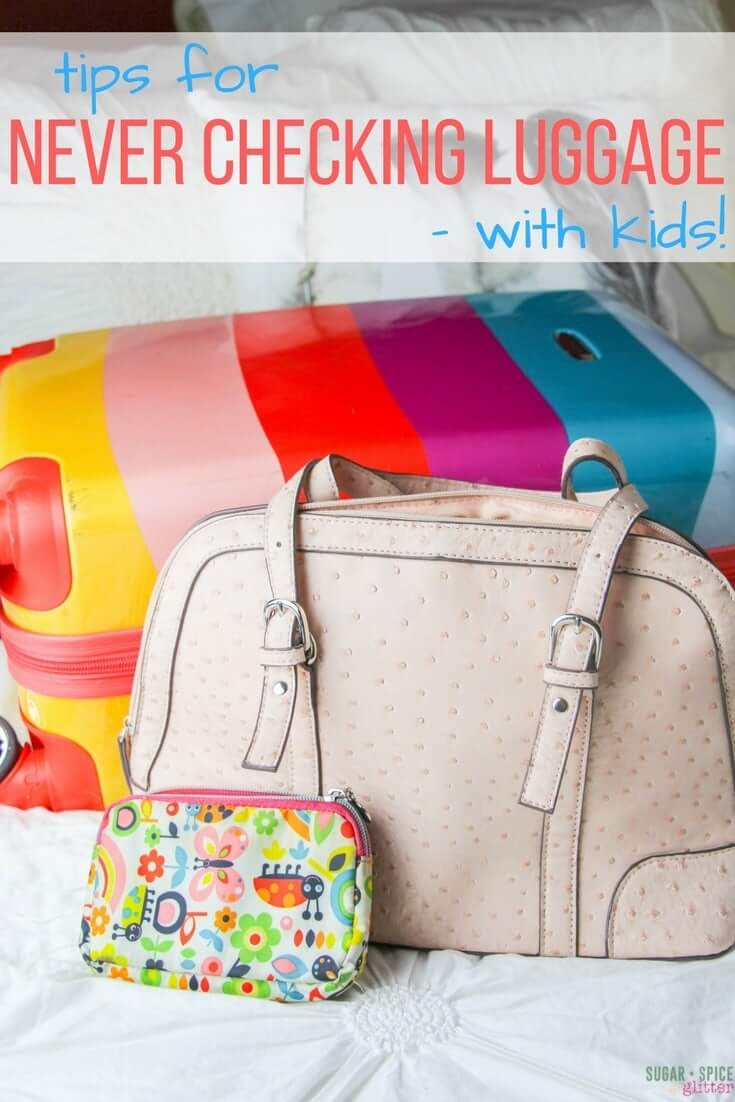 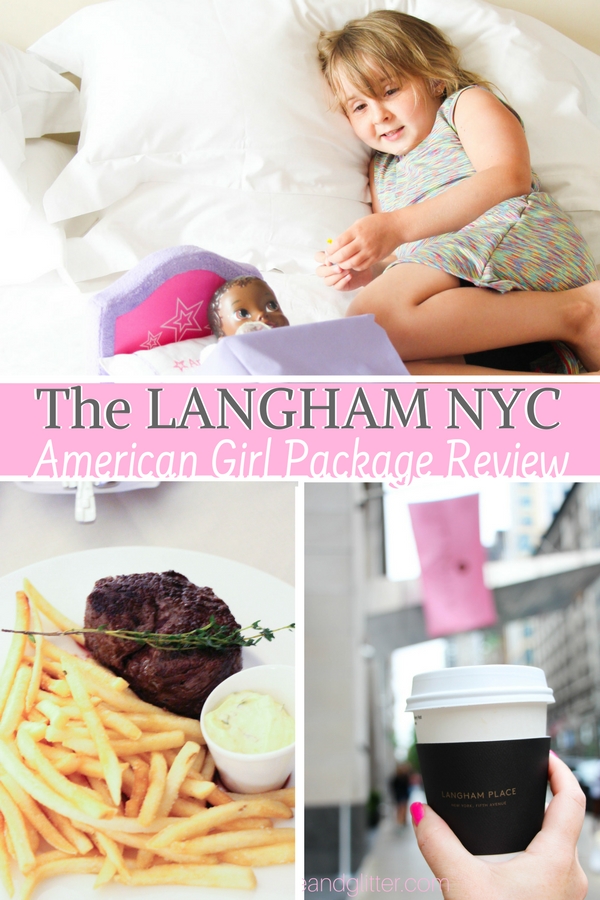 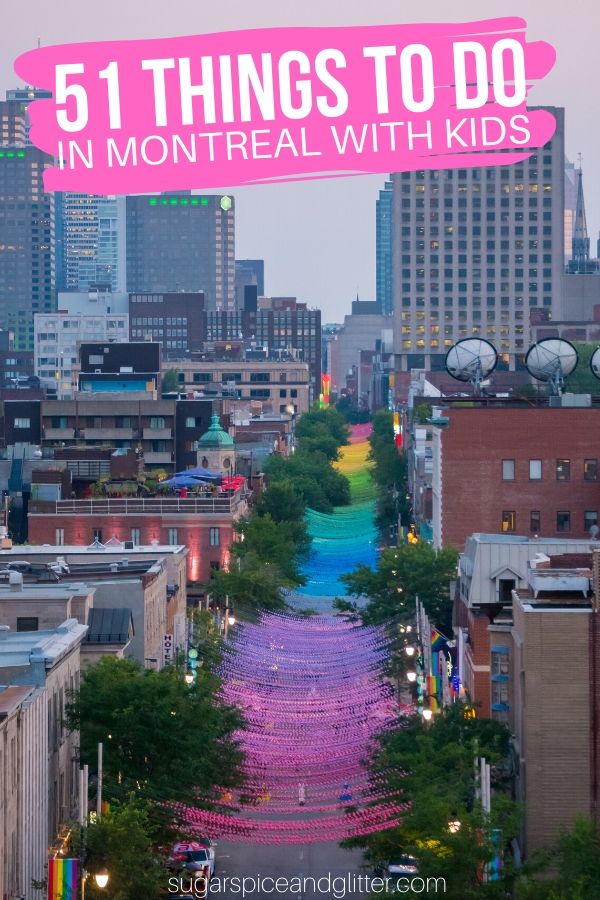 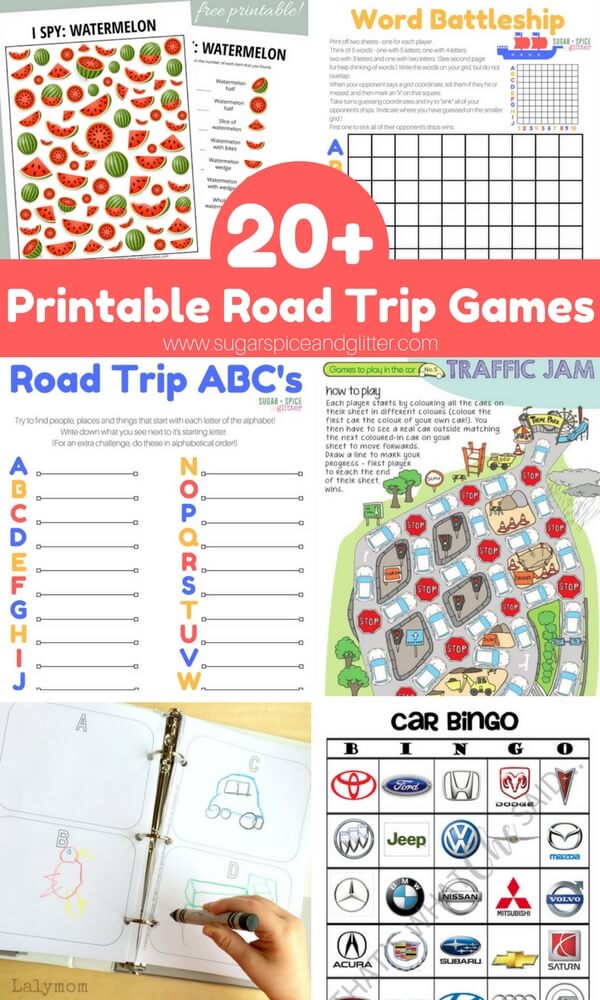