I had a big announcement planned for Friday which will be postponed to the near future, but as a Canadian, I just didn’t feel it was right to carry on Friday as if everything was going according to plan. For those who don’t know, an attack was made on Parliament Hill where the Canadian government sits and an unarmed soldier, ceremoniously guarding the grave of the Unknown Soldier, was shot and killed.

When any act of violence or terror happens, there are always strong and mixed reactions. Overall, I am proud of how my country responded in the aftermath of the shootings.

There was one part of the public reaction that I just couldn’t connect with, however, the feeling like our country had been violated or trespassed upon by this act. In fact, whenever such an act occurs, I am saddened by the occurrence, but never really shocked at its proximity to myself. And I wouldn’t be surprised if other members of military families felt the same way.

Because I grew up with my father putting on a uniform and leaving whichever embassy or military base we were living on at the time, and travelling to some of the most dangerous places in the world at the most dangerous times to do a job that I could never be brave enough to do, and honour and uphold the values and decisions of his country in a way that would make most tremble.

When you grow up like that, the bombing, the kidnapping, the assassinations happening thousands of miles away, they aren’t far away. The very fact that your parent is somewhere amidst all of the violence and isn’t running away from it, those places become very real and very close.

When your dad isn’t tucking you in at night because he’s halfway around the world with guns pointed at him, that violence feels so close you could touch it.

I am proud to live in a country and to have a father who didn’t look on the world’s problems and say, “not my problem.” For me, part of being a Canadian, or really, part of being a person, has always been that when an act of violence or injustice happens anywhere, it is just as important and significant as if it happened right beside me.

The losses of Nathan Cirillo and Patrice Vincent are terrible, yet not unimaginable for any member of a military family. My heart aches for their families, their losses are not abstract or conceptual for me; their losses could have just as easily been my loss, one that I prepared myself for over and over again, and many others still do. Their sacrifices should be honoured, along with the daily sacrifices made by every member of every active military family. Being a child in a military family has shaped me more than any other influence in my life — in wonderful and terrible ways.

Even though my father has been retired for over a decade, he is still a solider. Just over a month ago, he was walking out of a bank when a man walked in with (what my dad assumes was) a fake gun and methodically went from teller to teller instructing them to hand him money. My father waited until the bank robber exited out the opposite set of doors to avoid anyone getting hurt, and then took off after him, unarmed. My dad chased him on foot until the man entered a getaway vehicle, and then he remained on scene for police.

When my dad called me to explain why I hadn’t been able to get a hold of him all day, I wasn’t surprised — I was amused and proud.

Being a solider was never a job; it is a identity, a way of life, a values system, and so many other defining things. And being a soldier’s daughter, that is a legacy and a privilege that I am honoured to hold. 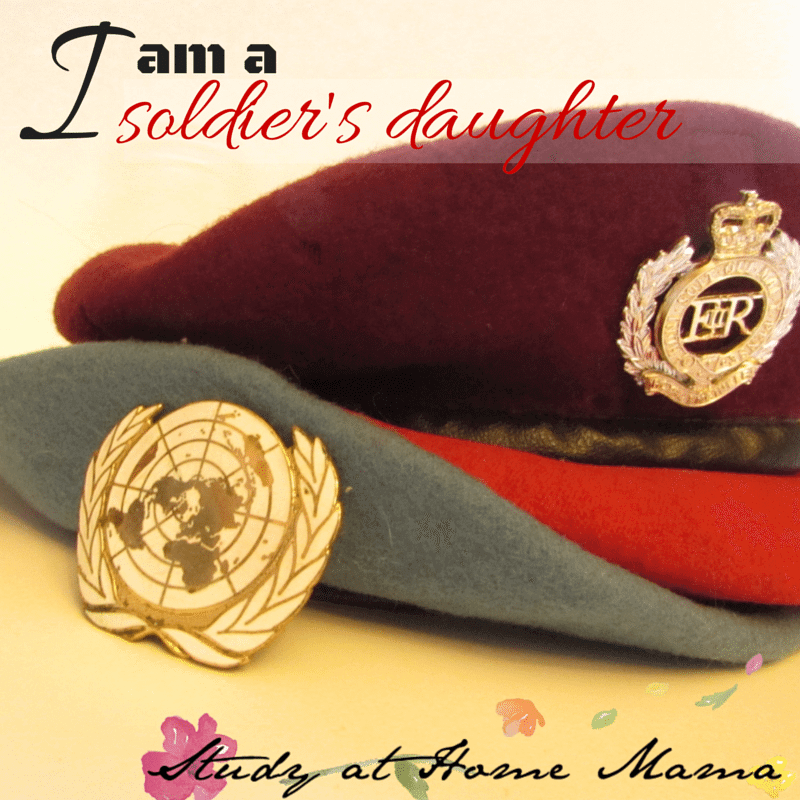 « Kids’ Kitchen: Green Eggs
Is There a “Potty Learning Window”? »