I found this fun Canadian twist of the 12 Days of Christmas last year on Boxing Day (not on sale, I might add) and was so excited to be able to create a Montessori-Inspired Christmas mini-unit based on A Porcupine in a Pine Tree! 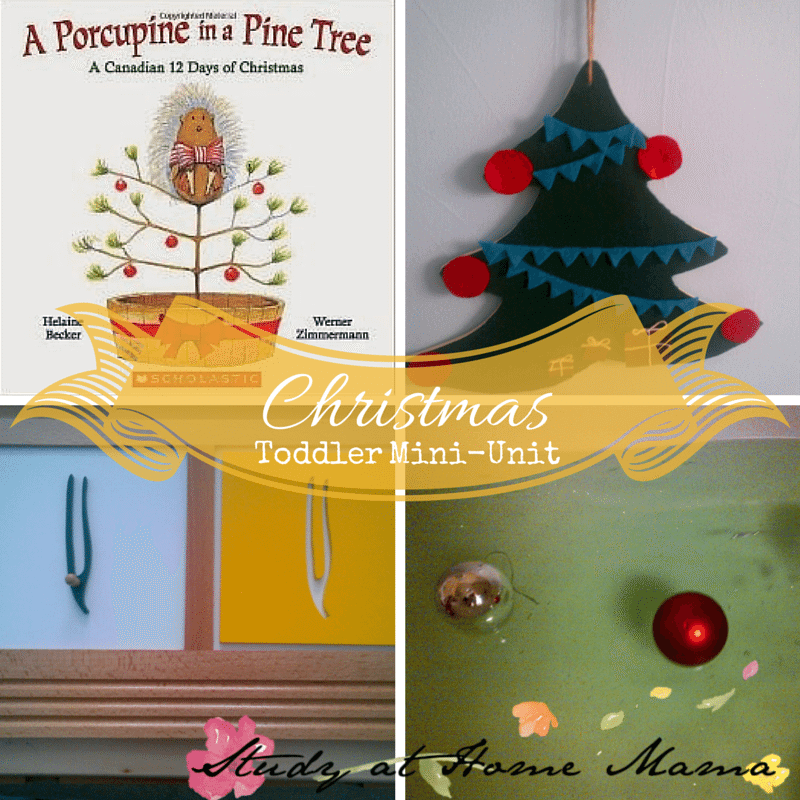 Helaine Becker’s A Porcupine in a Pine Tree is a fun romp through the 12 Days featuring clever illustrations by Werner Zimmerman. Classic Canadian iconography appears on each of these days in unexpected and fun ways — squirrels curling, puffins piping bagpipes, Maple Leaf hockey players a-leaping… the circus goes on!

This book is a wonderful treat for Canadian children in that it validates unifying parts of our culture that are familiar to children, or can facilitate conversations about cultural elements that a child might not be familiar with — such as the bagpipes. I also think this would be a fun book for a child that is not Canadian, as it is so farcical that anyone could enjoy it, and it would be a fun way to learn about Canadian culture using a familiar story format. Personally, I have an Australian version of the 12 Days (A Bellbird in a Flame Tree) which I found to be a fun learning opportunity.

Of course, we had to do some Christmas/pine tree activities to kick things off. 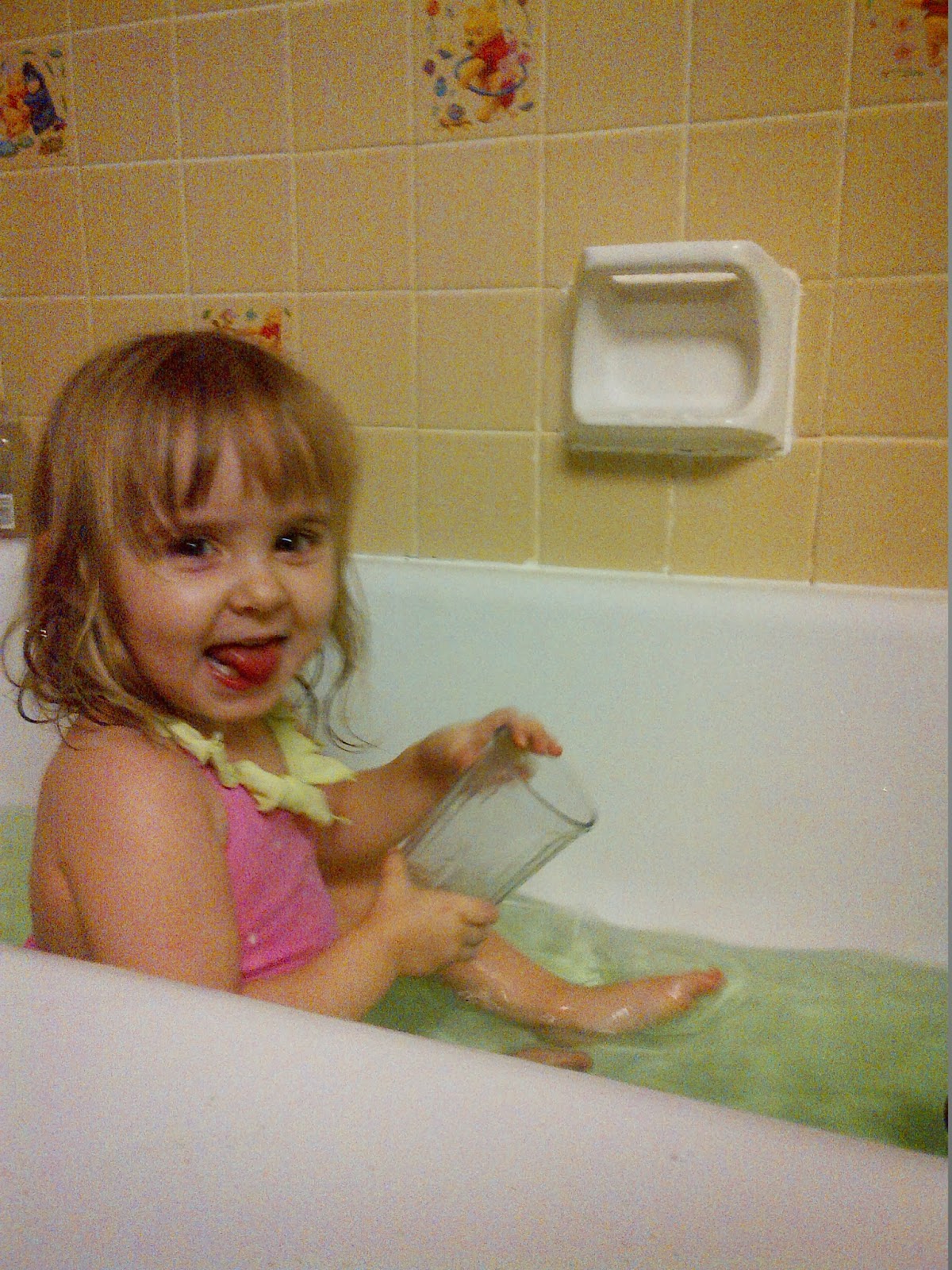 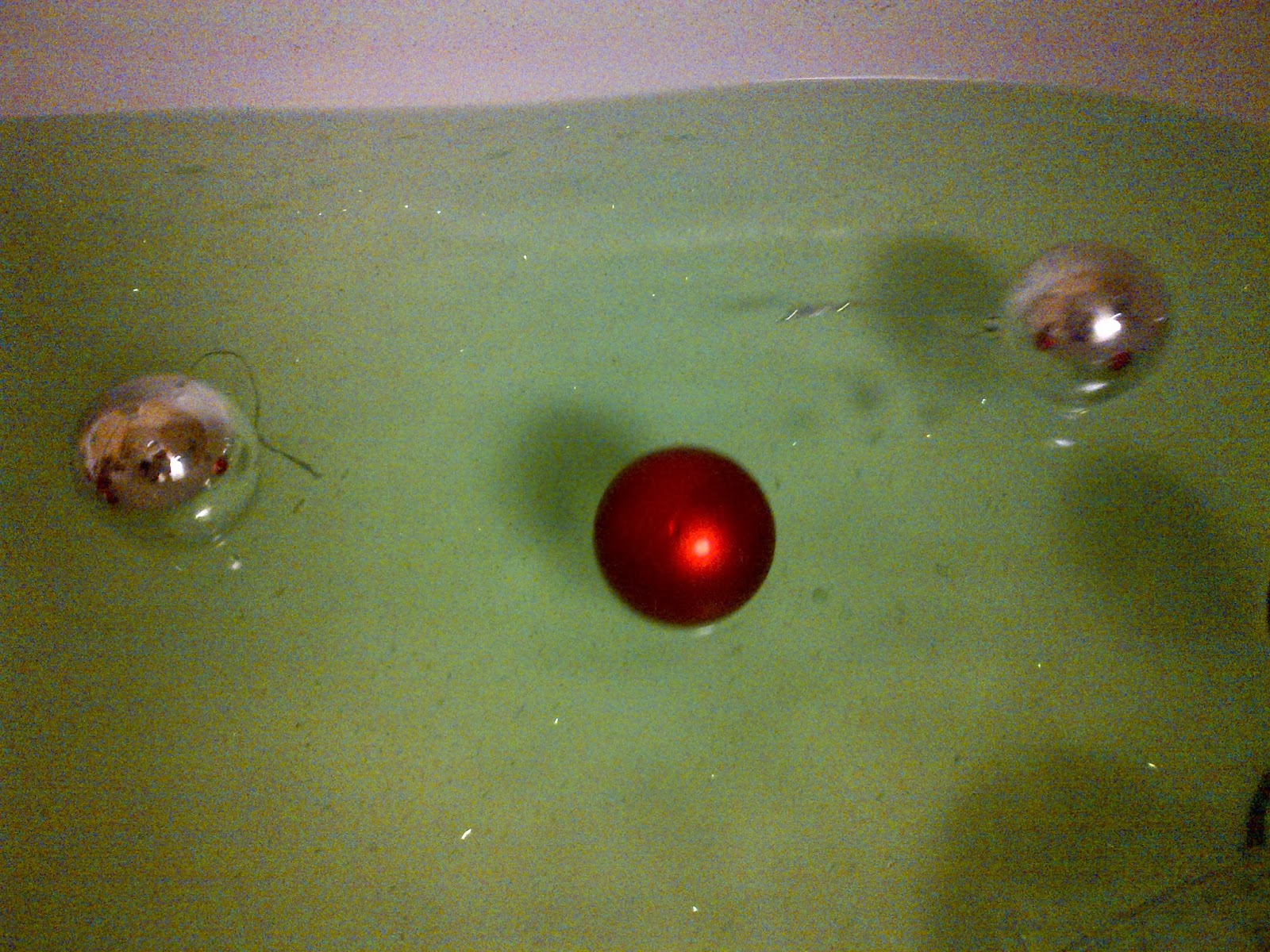 We started off with a green sparkle bath with some green Kool-aid, green glitter, and a few small, red (shatter-proof!) ornaments. This is the first sensory bath picture featuring Ella as she doesn’t often wear a bathing suit for bathtime, but I felt like it was a good precaution with the glitter.

Ella just received the botany leaf cabinet, so we explored the pine needle inset and compared it to actual pine needles. We also noticed how sticky the pine needles were and how strong the sticky sap smelled. 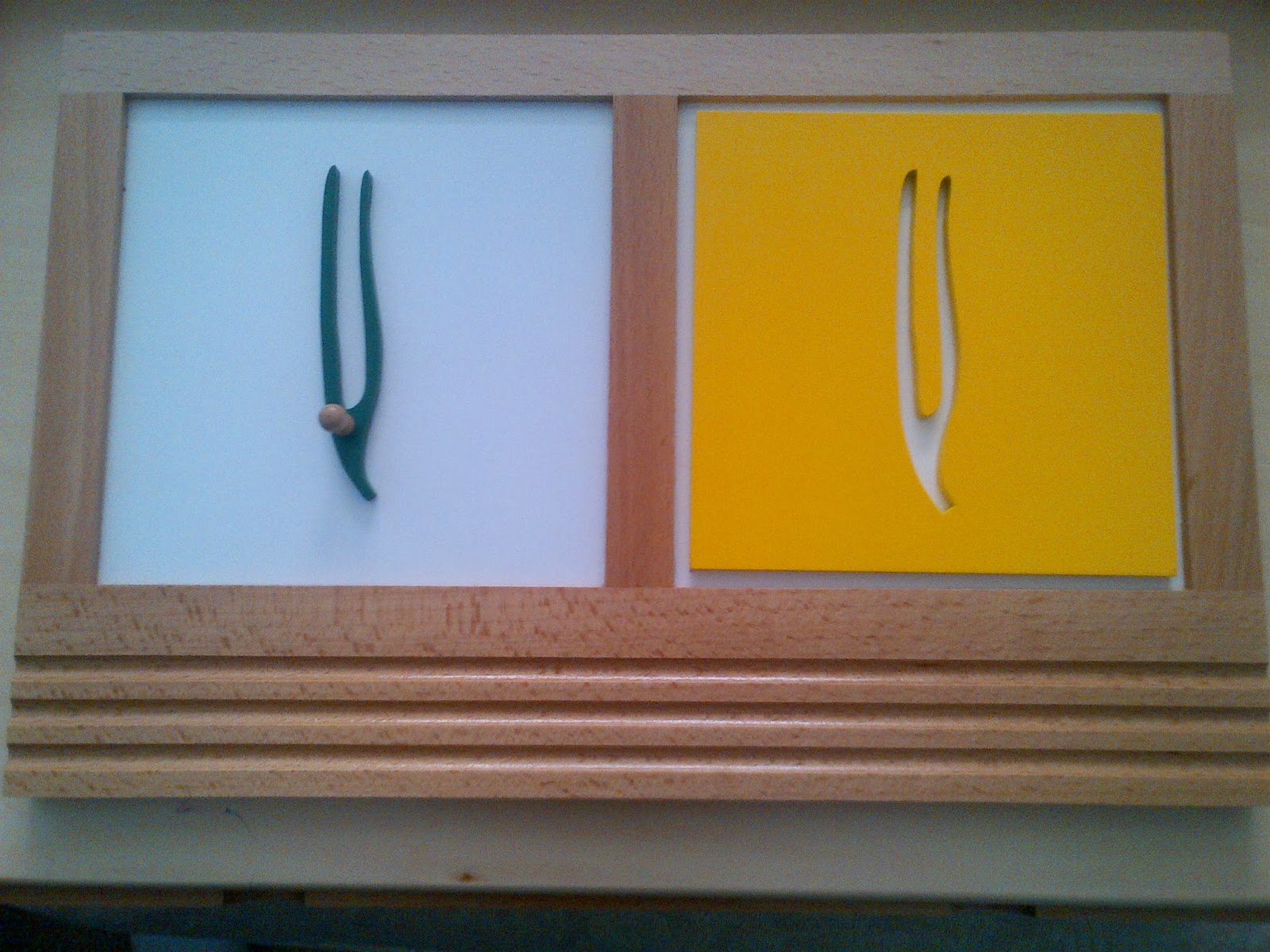 We looked up pictures online of all of the featured animals and compared them to the illustrations provided in the book. This was an interesting comparison for both artistic and biology purposes: Ella was able to understand how an artist might choose to represent a real subject, while also learning that the reality of a subject may be much different than depicted in story books. We also listened to some clips of each of the animals’ noises and Ella observed a few differences; with an older child, I would explore if the sounds could be used as an aide in classification. (And I have added a Folkmain Porcupine Finger Puppet to our wishlist!)

We don’t have an opportunity close-by to observe many of these animals, but we did go outside to look for squirrels, which started an inquisitive conversation about how squirrels climb trees and the purpose of their tails. I encouraged Ella to come up with several of her own possibilities (hypotheses) and did not provide any suggestions or answers myself. I think its important at this age to just encourage inquisitiveness and not worry so much about having all of the answers. When the child gets older, they will be drawn to research and explore those answers on their own (or perhaps with some guidance), so it is important that they develop a desire for knowledge, rather than instant answers from parents. (Which also saves me from not looking genuinely clueless — as I am, most of the time.)

In a few weeks, I will be sharing with you my personal dislike of dressing frames (bleh), but we decided to do a fun twist on dressing frames by using some Build-a-Bear clothing to dress Ella’s dolls. We of course already owned the Maple Leafs uniform set and the Mountie (Police) set.

We listened to some traditional bagpipe music and then attempted to make our own “pipe” (pan flute) music with some straws. By making the straws different lengths, we were able to hear slightly different notes when each was blown through. Our boomwhackers were also brought out for this musical exploration!

I enjoyed the juxtaposition of canoeing and skating — which require different states of water. We did a few explorations which should properly earn their own post, but the most obvious extensions were making ice jewels with food colouring and water balloons and then melting snow into water.

Any rendition of the 12 Days of Christmas easily lends itself to counting activities, and this version was no exception! Ella had not previously counted to eleven or twelve, so she was particularly excited about that — although, to be honest, I truly do not think that she understands the numerical concepts of those numbers yet. This was rote repetition at its finest, which was fine in this fun activity, but does not follow Montessori pedagogy, nor do I think its a solid foundation for later mathematical understandings.

Since I had already gathered so many materials for our counting exercise, I had to put together a quick sensory bin. Some pine needles and pom poms for the base, red bows, mini-donuts, a small trophy, and a few of our North American Safari Toob animals. However, this bin wasn’t as big of a hit as the felt Christmas tree: 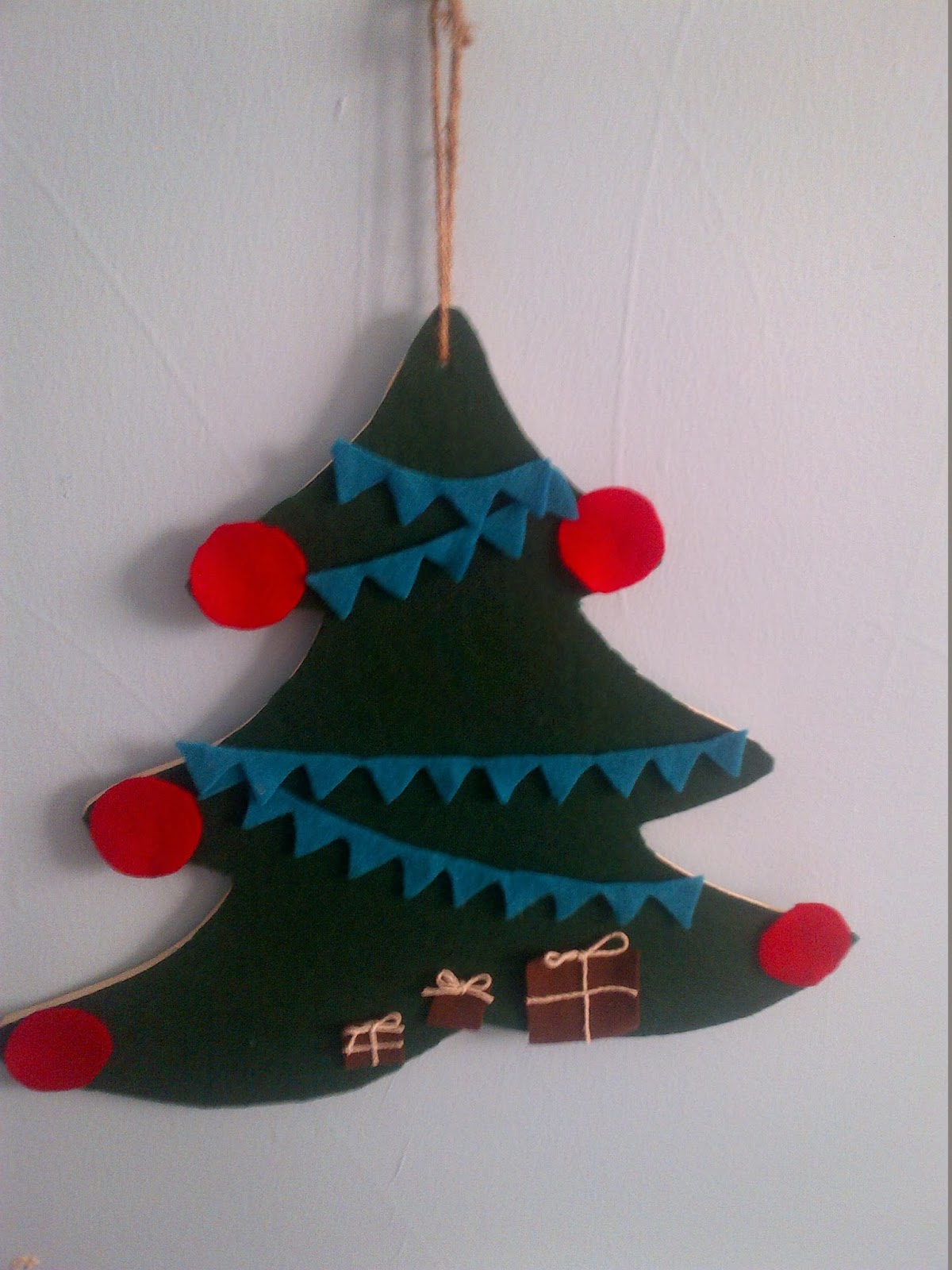 And, then, of course, we had to try our hand at making some “beavertails” which is similar to a funnel cake. We tried this lighter, slightly healthier version by Kelly over at Inspired Edibles, as “beavertails” are usually deep-fried and choc-full of sugar!

What will you be exploring as you get ready for Christmas? 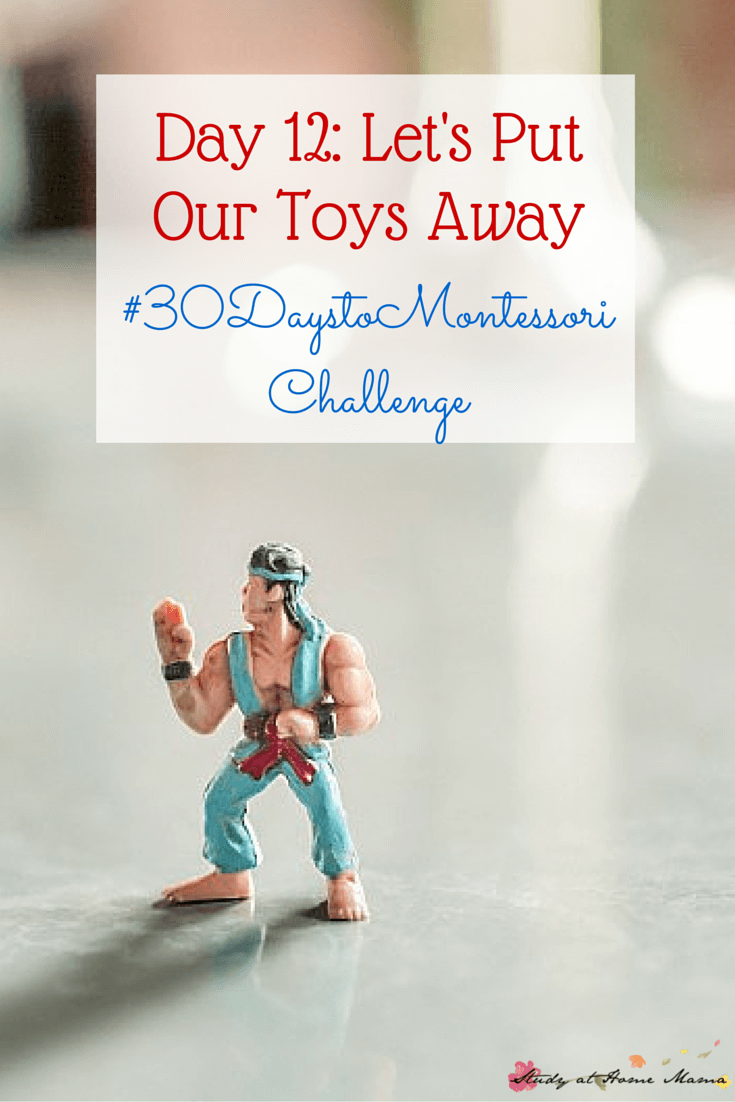