Alright, so I’m going to try to make Apple Week a bit more condensed than Pumpkin Week! I love how much Ella dove into her pumpkin studies, though, and wouldn’t be against spending the same amount of time and effort on other unit studies, as we were able to be really creative and flexible in ensuring that each important “subject” was covered by tying pumpkins in somehow. I think this is a great way to reach children who lack interest in the base subject — adding a personal interest element to the application.

Of course, we started off the week visiting an apple orchard with Aunt L. She is our favourite road trip companion, and I must say, she is an awesome co-pilot. She’ll even roll down your burger wrapper for you! And, she brings music. Grown-up music. Remember grown-up music? 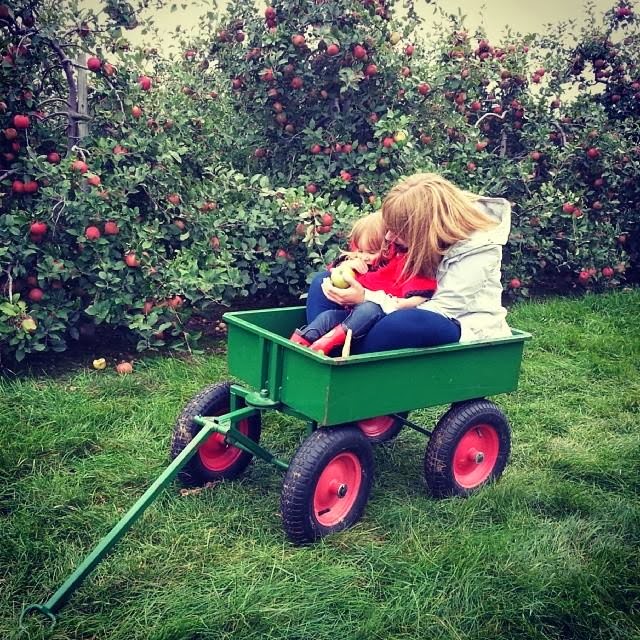 I love that this apple orchard offers (and labels!) different varieties of apples, and we were able to explore in relative seclusion. The staff was really friendly and helpful, and cut us an amazing deal — 60lbs of apples for $35! (The person we dealt with was also a homeschooler, so I think that had something to do with it.)

But, as great of a deal as that was, we had to come up with some uses for those apples — quick! 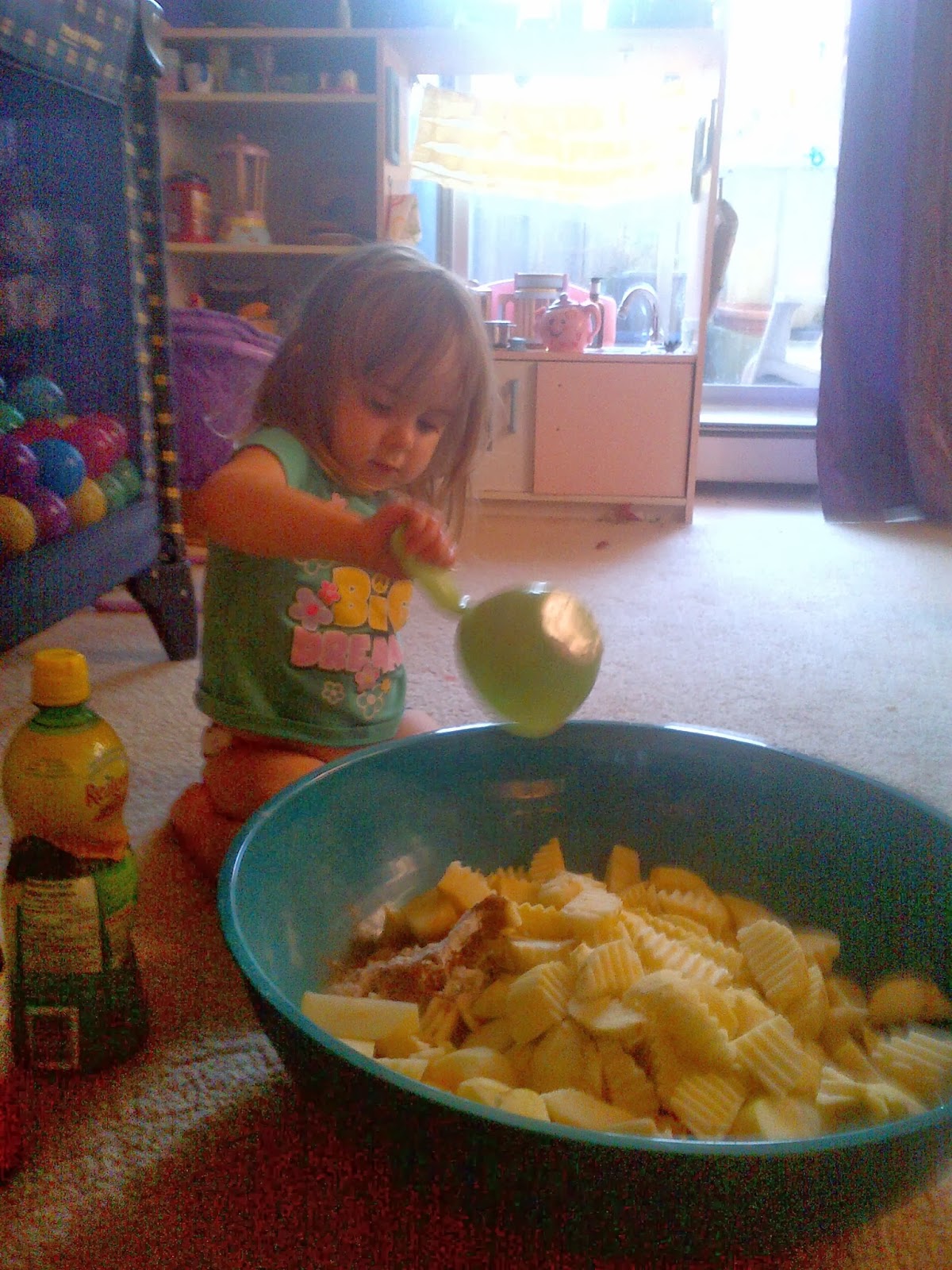 We made a great practical life activity out of making five apples pies all at once. Ella got to practice her sequencing, apple cutting, measuring, and cleaning of environment. (Follow the link for my kid-friendly, fool-proof apple pie recipe.) It was almost like a giant baking sensory tub!

We also tried the Vanilla Apple Muffins from Moufflet (which is currently half off on Amazon, ridiculous). We also made two batches of apple butter, a few cans of applesauce, and homemade apple chips (sliced, sprinkled with cinnamon, and baked for 30 minutes on both sides). I tried to entice Ella to eat some apple slices dipped in homemade caramel sauce, but she was appalled at the idea. 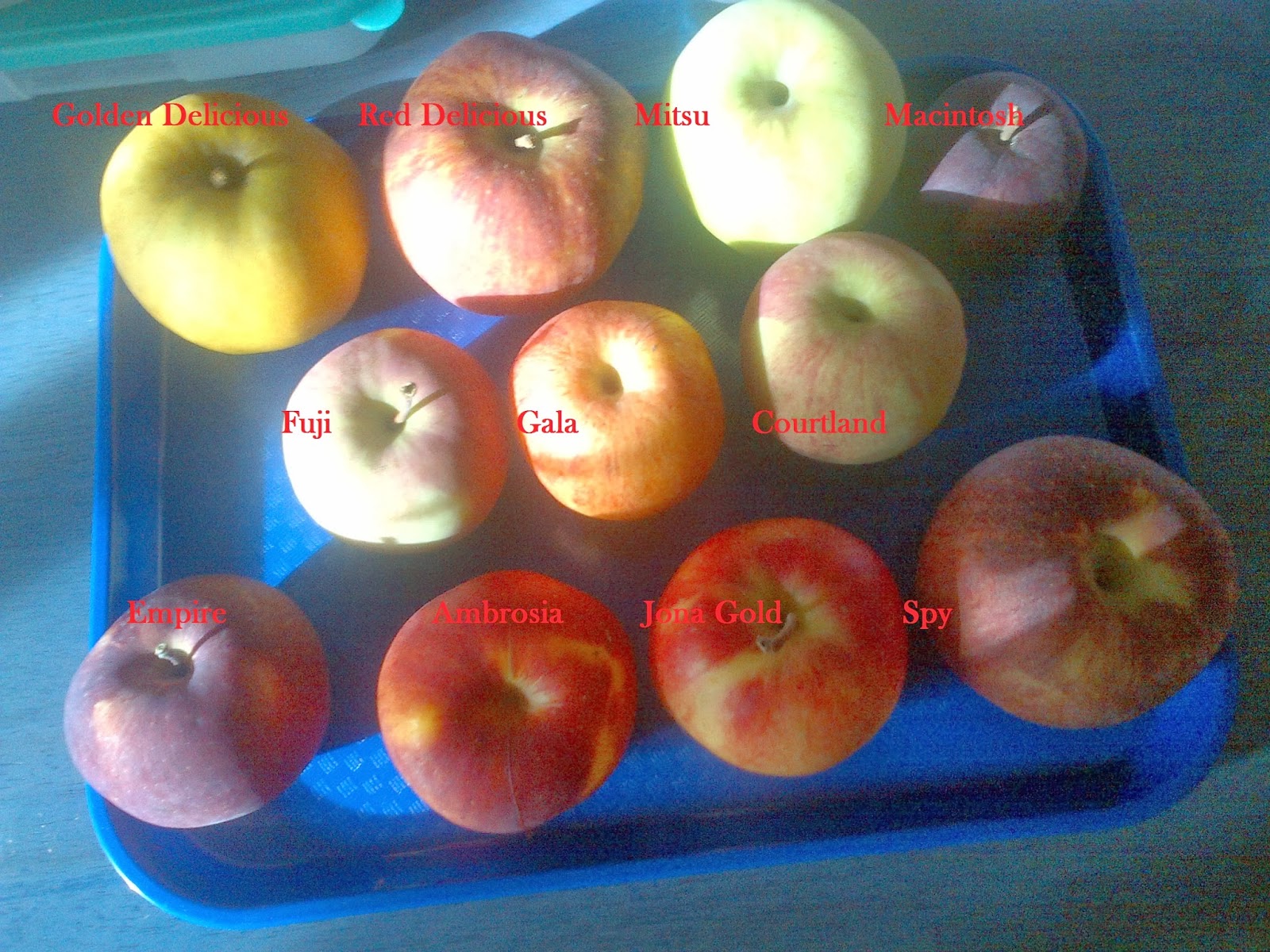 My intention for this tray was to teach classification by observing physical differences, as well as taste differences, but Ella was not interested in tasting the different apples this year (the Honeycrisp apples have spoiled her), but I will definitely try this activity again next year. She did enjoy learning that the physical differences meant that they were different varieties of apples, and she actually remembered quite a few! (The Honeycrisp was quickly removed from this tray before I could take a picture.) And, Ella being a math-nut, counted all of the apples and made up a little song about “no more twelve, now there’s eleven.”

I told our version of the Apple Star (traditional Waldorf) story to initiate our apple slicing work. Ella loves counting out all five sections of the “apple star” now, and we attempted to use some of our sliced apples to make apple prints, but Ella was a bit heavy with her paint application so her stars were filled in (control of error for lightness of touch). Language, vocabulary development, lightness of touch, fine motor, art exploration, biology. 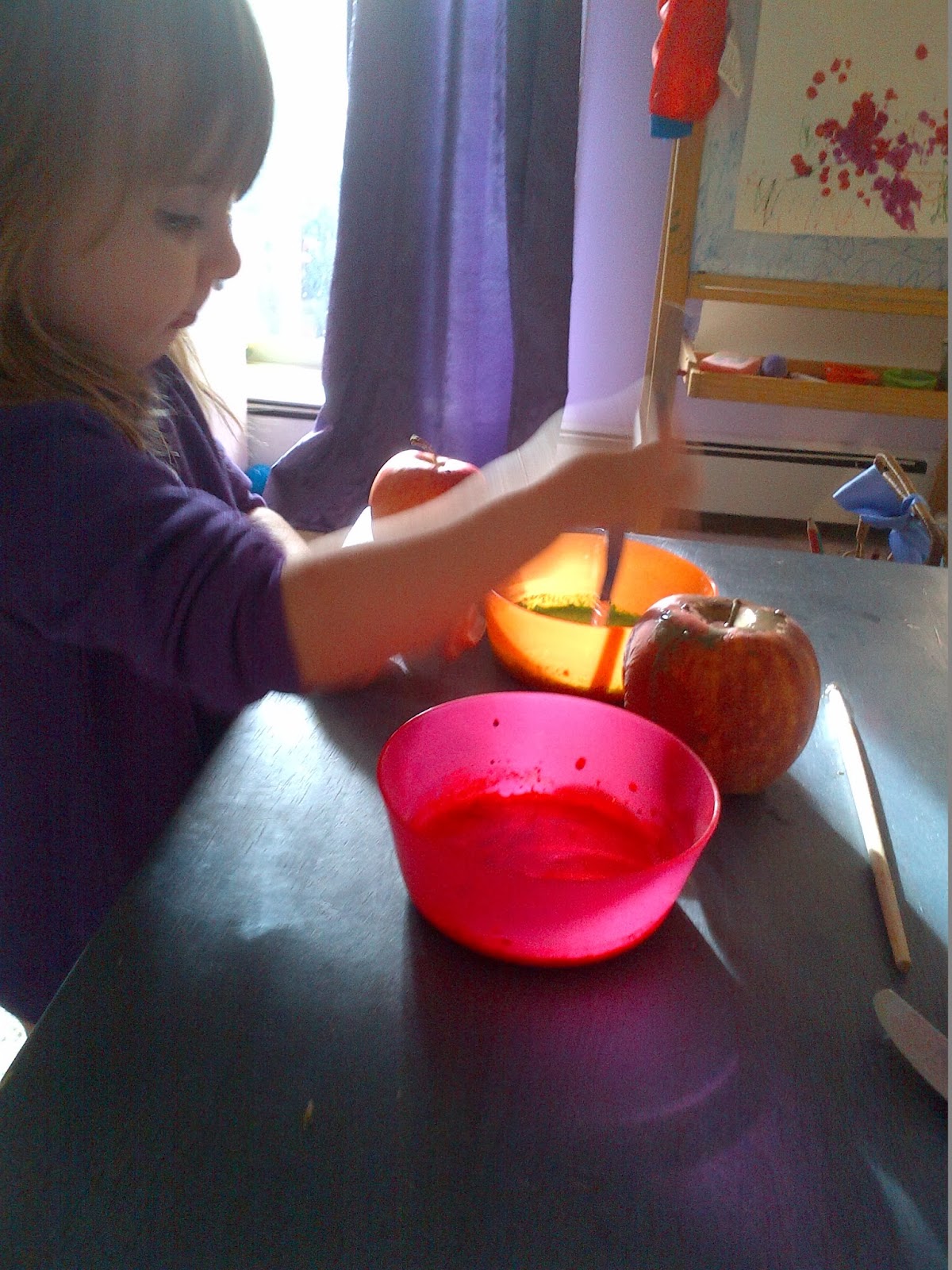 We also explored some nomenclature 3 part apple cards to learn the different individual parts of the apple and compared those cards to a halved apple. (My rationale for doing this is that we are not always going to have access to the material that we are studying, so pairing the physical object with the cards when we can helps solidify the concept that the cards reflect the reality of a living or nonliving thing.)
I am really picky with our 3 part cards now; there were many that I found (generously provided) for free, but I only want ones that either I colour in, or that only highlight the labelled part in a singular colour (often, red). This ensures that children are focusing on the relevant part and its characteristics, not the different colours of different parts. There is also a free apple life cycle 3 part card set available here, we used the cycle diagram so Ella could visualize the progression before initiating sequencing work with the cards. I like to think having heard the Apple Star story helped…

I made cinnamon play dough and apple play dough with this apple flavouring and left them on Ella’s art cart, along with some autumn-themed cookie cutters. They smelled INCREDIBLE! She spent a great deal of time perfecting making “apples” (rolling into balls), then using her apple cutter to slice them, before adding to a cinnamon play dough-lined mini pie plate.

We did some simple science exploration by taking some apple slices and sprinkling different liquids on them: water, apple juice, apple cider vinegar, and lemon juice. I encouraged Ella to use eyedroppers for this work as a great practical life that builds fine motor control, and also asked her to predict what would happen when we put the liquid on the apples. We left them for about fifteen minutes, and then returned to them. Ella quickly offered up her observations and I asked her why she thought those things happened:

We learned “My Rosy Red Apple” from my Autumn Wynstones book — if you can find a copy at a used bookstore or online, this is a great Waldorf series that has been a great resource for us. (There is another traditional Waldorf story about the “red house with five rooms and no door” which this song ties into, but I choose to focus on the Apple Star story instead.)

I ordered a Montessori “Apple Game” but it sadly didn’t arrive in time for Apple Week. We’ll definitely review it once it arrives. This was supposed to be our math activity for the week, so instead I quickly whipped up a construction paper tree, slid it underneath some contact paper on our window, and provided ten red “apple” pompoms. The first time I attempted a similar set-up, Ella ripped it apart, so I was pleasantly surprised when she actually went along with the activity. You could mark and label the spots where the apples are to go, but we instead just counted out loud as we added apples to the tree. I’m currently hiding Ella’s number cards from her, but it would be a great activity to count out red pompom apples! Counting, number recognition.

What will you do for apple week?

*For the first time, this post contains affiliate posts. Purchases made through Amazon via these provided links help me to provide more give-aways for readers!